This year saw the return of the club's annual Lardy event, Clotted Lard, following the disappointment of having to cancel last year's show in the wake of the global pandemic.
We had a fantastic day with the show well supported by the Lardy community and an opportunity to welcome back previous and new guests to the club to enjoy a day of Lardy games as reported here on the blog back in September. 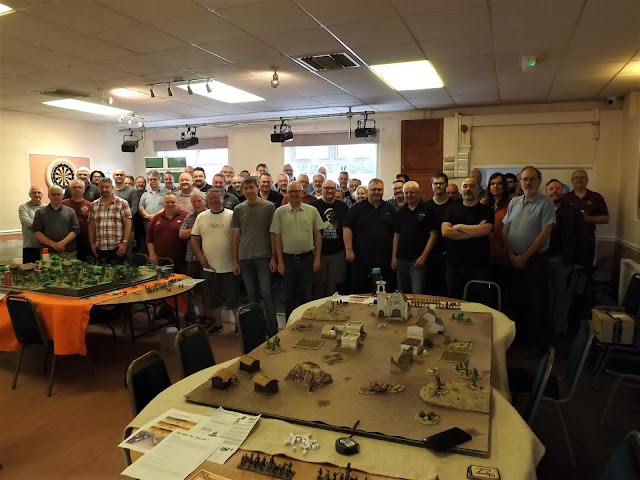 Devon Wargames Group - Clotted Lard 2021, We're Back!
As well as having a great day of wargaming, the show has traditionally allowed the club and our guests to support our veterans by contributing the monies collected from it to Combat Stress who, as well as providing specialist mental health care for those military personnel that serve the country, today and since 1919, also rely very much on public funding to support their vital work with over 75% of that funding coming from charity raising activities, which as you might imagine was badly affected by the social restrictions imposed by Covid 19.
Thus instead of running marathons and such like, the wargaming hobby is only too happy to show its support in our own inimitable way by doing what we do best, having fun with our hobby and enjoying the great social activity that is historical wargaming captured so well by the rule sets offered by Too Fat Lardies and their own ethos of promoting having fun with our games. 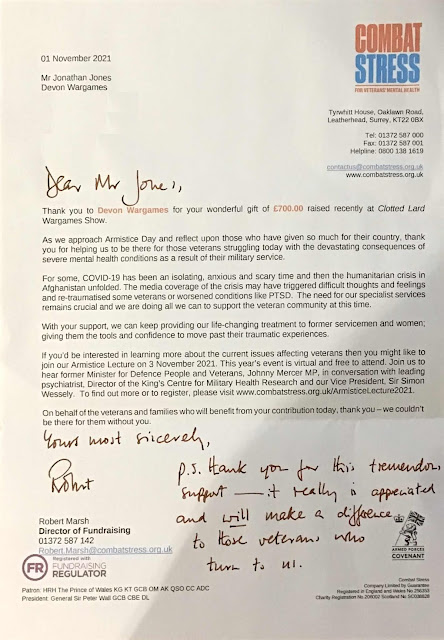 In previous years the event has gone from raising £250 in 2018 to £400 on the last two occasions, with all those planning to attend our cancelled show last year very generously passing on their pre-paid contributions to the charity.
This year as you will see the final tally came in at £700 which was absolutely fantastic, and with a growing interest in attendees and folks wanting to put on games at Clotted Lard we are very hopeful of maintaining this trend in charitable collecting.
Many thanks to the Devon Wargames Group club members, the management of the Whipton Institute, Nick Skinner and Richard Clarke from Too Fat Lardies and all our enthusiastic Lard loving guests who support and make our show the great day it has become in the club calendar.
Here's looking forward to Clotted Lard 2022.
Posted by carojon at 17:33