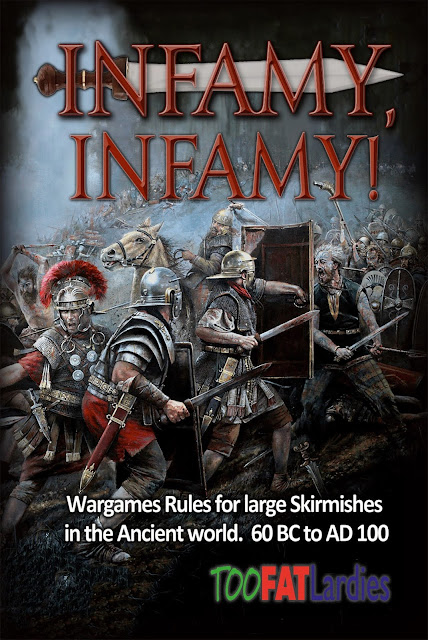 Infamy! Infamy! was released in the middle of lockdown last year which means it's not been able to make much of an impact at club meetings. Being a contrarian I hadn't gone for any of the armies in the book but had instead, used the release of the rules as an opportunity to paint up the Late Romans and Goths that I've had hiding in boxes in the garage. Having toiled away all summer it was time to get all my toys out on the table. 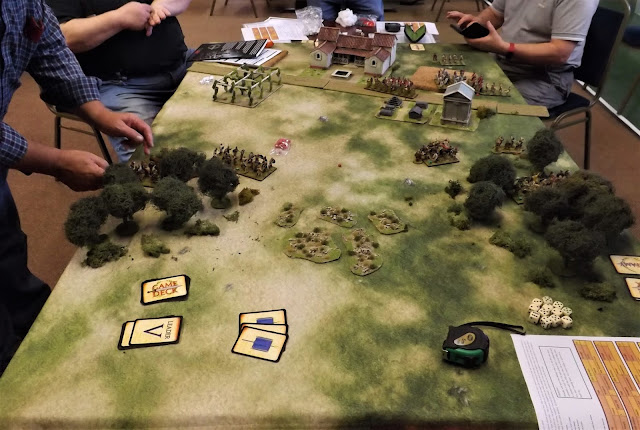 The scenario was based around the Gothic wars that led up to the destruction of a Roman army at Adrianople in 378AD. The Goths had sought permission to cross the Danube some years earlier and having been mistreated by the local garrison, had rebelled and had fought battles with local forces across the diocese of Thrace. Goth raiding parties had ranged across the region in order to gather feed their families and it is one of these raids that was the basis of this game.

The two Goth players had to raid the Villa and carry of enough victuals to make the various Mrs Goth happy at the end of the day. The Roman players had to prevent them carrying this out. The Goth players had similar basic forces, 1 Group of Elite Noble warriors, 2 Groups of Warriors, 1 Group of skirmishing Archers and 2 Leaders. In addition to this, one player had a group of Allied warriors that might not follow orders and the other had a group of mounted warriors. Both these had a Leader attached. 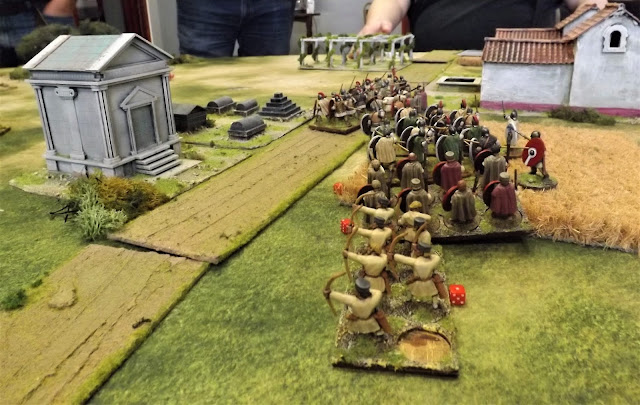 The Roman players on the other hand had identical forces, 2 Groups of warriors, 1 Group of inferior warriors and 1 group or archers. They had 2 leaders each with the archers having a Supernumerum leader. 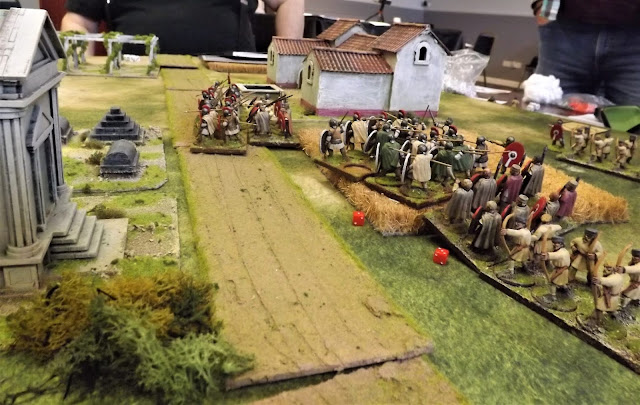 The game kicked off with most of the Roman forces being able to deploy between the villa and the mausoleum. This led to a bit of a roadblock and peoples sandals getting stepped. While this was happening, there was a stirring in the woods. Groups of Goths started to emerge. The players decided to split there groups up. Rather than large mobs of 3 or 4 groups, they instead moved out in groups of 1 or 2 mobs and started to spread out across the fields in front of the villa. 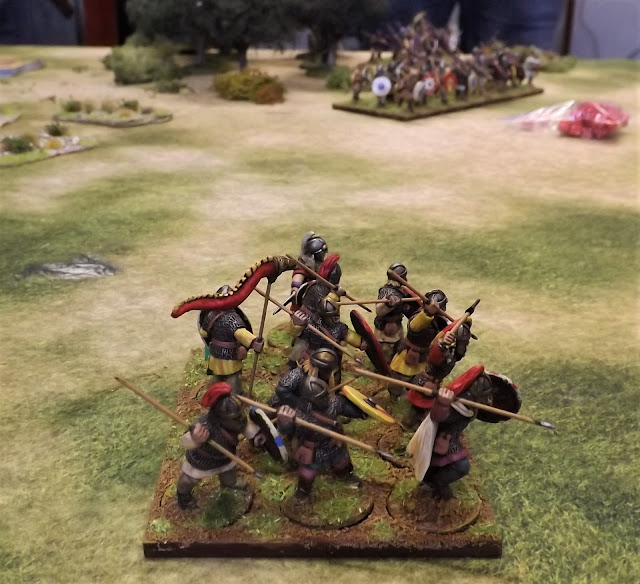 On the Goth Left, the warriors led the way forging their way out of the forest with their leader encouraging them forward. They paused to whip up their fervour and moved on. 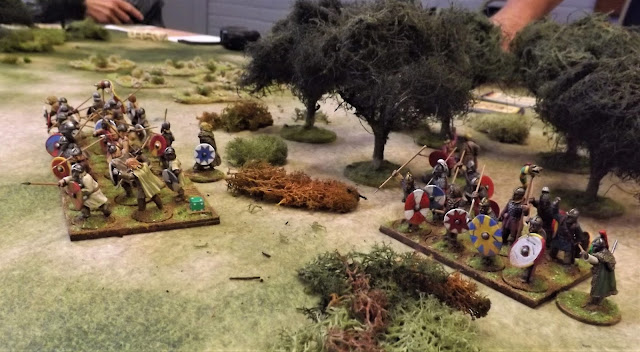 The nobles from their tribe trailed behind them looking for an opportunity to break through the Roman line if the warriors opened up a gap. 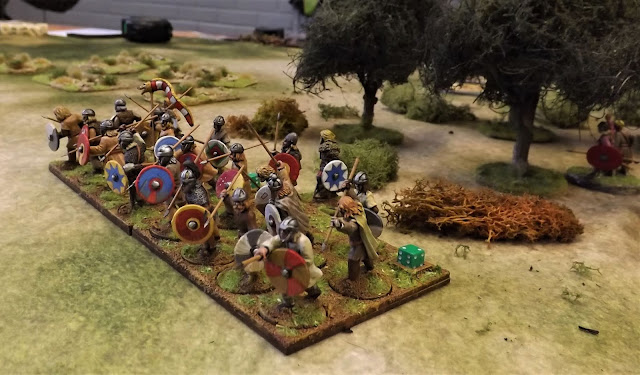 On the Goth Right , the Nobles led the charge with their flank guarded by some skirmishing archers.

The warriors supporting them soon over took them and surged round the mausoleum with the Nobles joining forces with some of the more rough looking Allies and attempting to clamber through the grave yard next to the aging building. 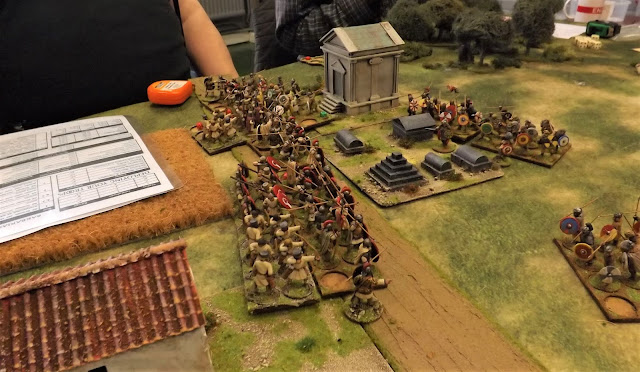 As the warriors on foot started to get peppered by the arrows and javelins coming from the Roman line, the mounted warriors attempted to circle round the Roman flank to the left. 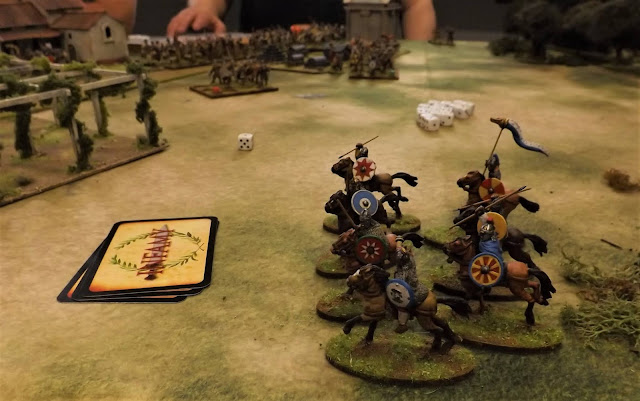 The Goth warriors on the left were suffering from the attention of the Roman missiles and decided to charge the Romans to their front. After chucking buckets loads of dice they were forced back with serious losses. The Romans proved themselves to be stout opponents. 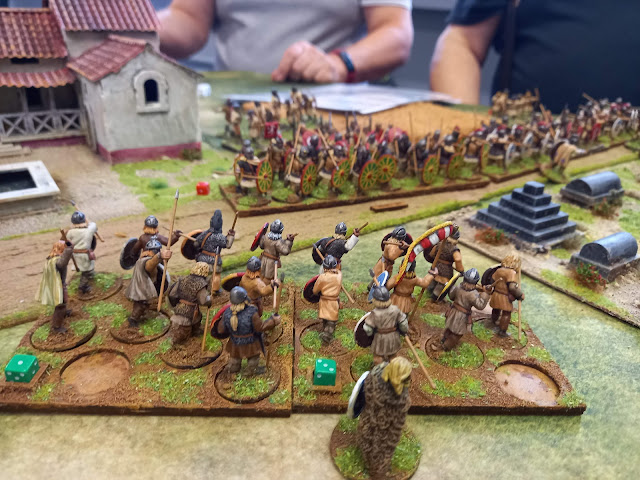 The Nobles had decided to leave the warriors to it and head towards the villa to loot it for all it was worth. 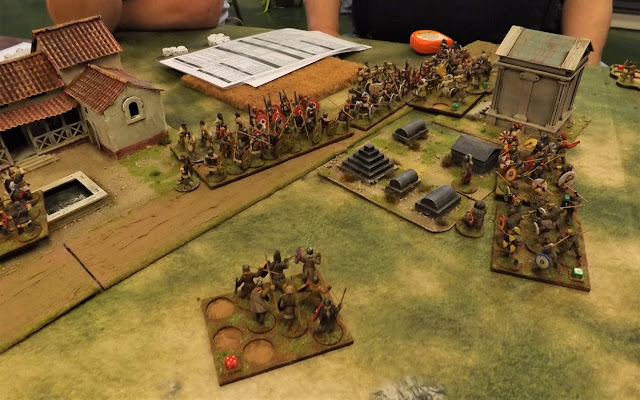 On the other flank the Roman defence was looking more desperate. The two groups of warriors charged the roman line which had been extended by inserting a group of Limitanei into the middle. These, less effective roman troops were supported to the archers to their rear but it was a furious combat. 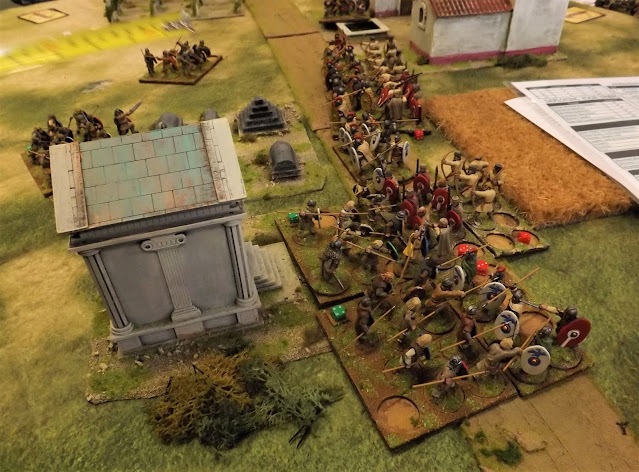 One of the groups of Legionaires was forced out of line and was pursued by the jubilant Goths. The other goth group was being worn down however and the shear determination of the Roman defence suggested that the Goths weren't going to be given free reign to loot the settlement. With the sun setting low it was agreed to call it a day and a very educational first game of Infamy! Infamy! was called to a halt. 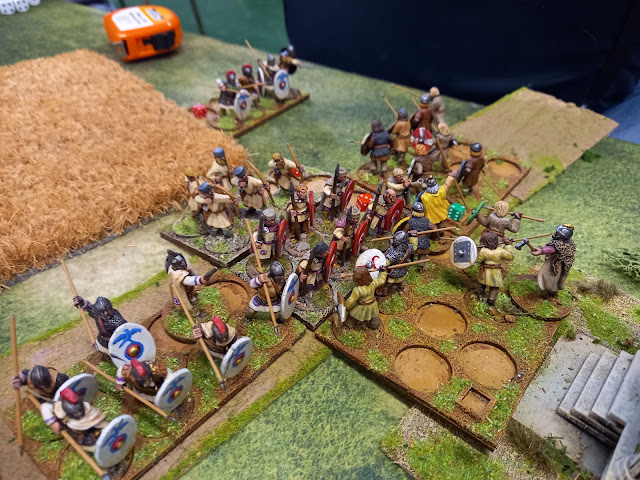