Lion Rampant in the Crusades 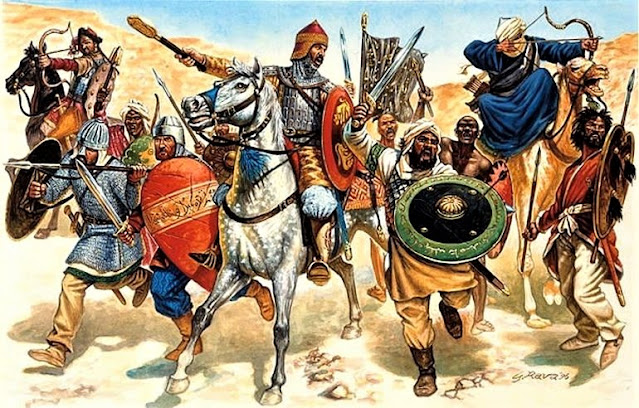 Editors Note: One of the three games played at this month's meeting of the DWG was a clash in the Crusades using Lion Rampant from Osprey & Dan Mersey. Mike C. put on the game and recounts the action, and any questions about figures, terrain or the game in general, please post in the comments box and I'm sure an answer will be forthcoming: 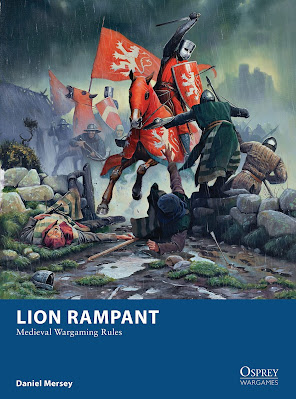 The year is 1097 and a Friar of questionable ethics has "acquired" a cup (some might call it a chalice) from a local Arab holy man. The Muslims believe this cup was used by the Prophet himself celebrating a famous victory. The Christian Church believes that this up was present at the Last Supper and may have been used by one of the disciples if not Christ himself. It is for this reason that the Friar now has it is in his possession. And it is also the reason why the Friar, having celebrated his success with too much communion wine, now lies comatose in a local village unaware that two warring factions are about to descend on that village to rescue the Holy relic. 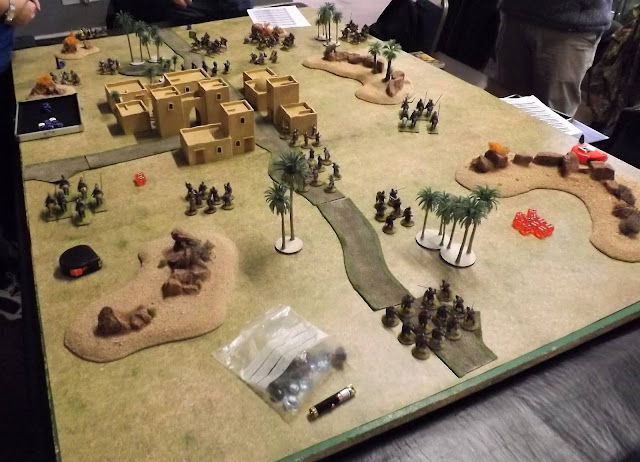 The Arab light infantry make great haste and enter the village, checking each dwelling they come to looking for the Friar and the Chalice. On their right flank the fanatical Arab heavy infantry, including their leader the aggrieved holy man, make their way towards the north end of the village supported by a unit of medium horse archers. On their left flank a unit of archers moves towards the south end of the village. 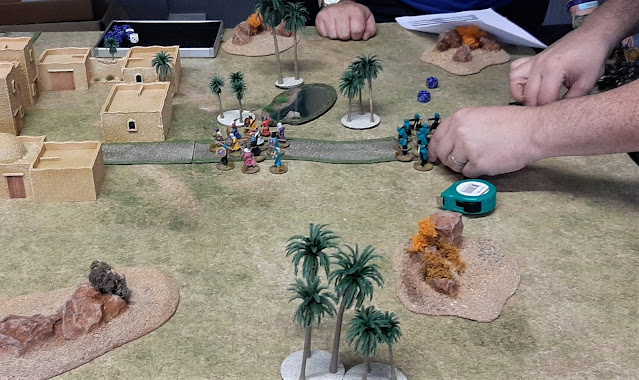 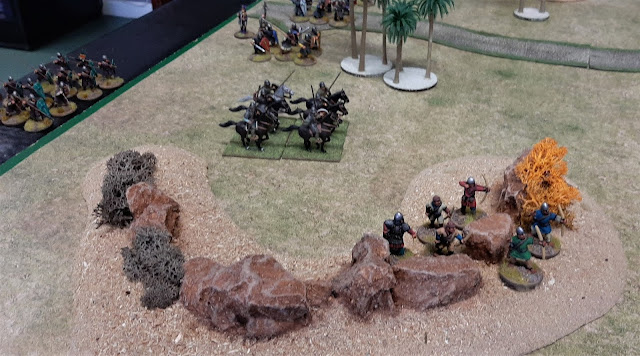 The Frank's send forward a unit of skirmishers (bidowers) who quickly reach the village supported by a unit of crossbows. They too start searching buildings looking for Friar and chalice, but have no luck. The Arab light infantry enter a courtyard and start to search the buildings around it. Unfortunately for them another unit of Frankish bidowers has entered the North end of the village and fires at them through a large open archway. The Arab light infantry suffer casualties and are forced to retreat from the courtyard straight into view of the advancing Frankish crossbows who send a deadly volley of bolts into them. Suffering further casualties, the Arab light infantry retreats away from the village centre.

To the north of the village Frankish knights (heavy cavalry) together with two units of heavy foot, including their warlord move to engage the Arab leader and his two units of fanatical heavy infantry. The knights take some casualties, but losses on both sides are fairly equal and both sides stand their ground. 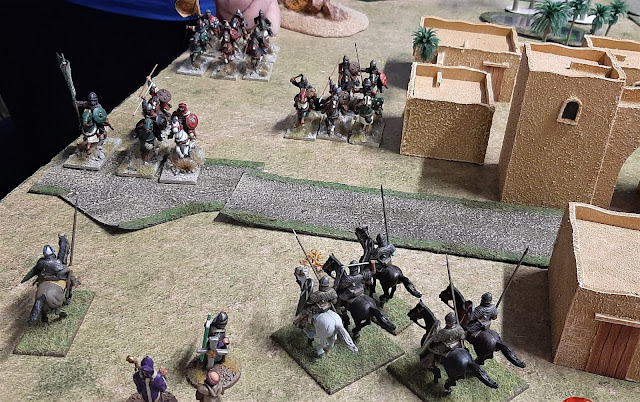 Meanwhile in the village, the unit of bidowers who drove off the Arab light infantry, have found the Friar and the cherished cup (or chalice) and are in a hurry to get out of the courtyard. 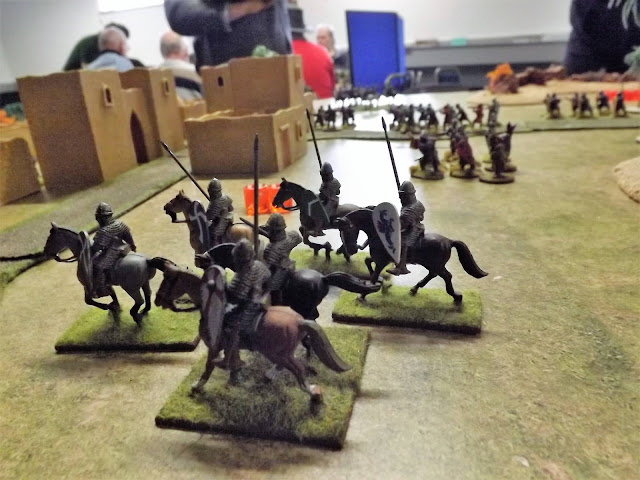 To the south of the village the Arab archers move up to support the battered light infantry, but they are wary of the Frankish crossbows and now begins a game of cat and mouse with each side trying to get a line of sight on the other to release their missiles. Each unit is reluctant to move out of cover but, the crossbows see two backsides sticking out from behind a wall and release at a short range. The Arab archers suffer only a few casualties but stand firm hiding behind the building. 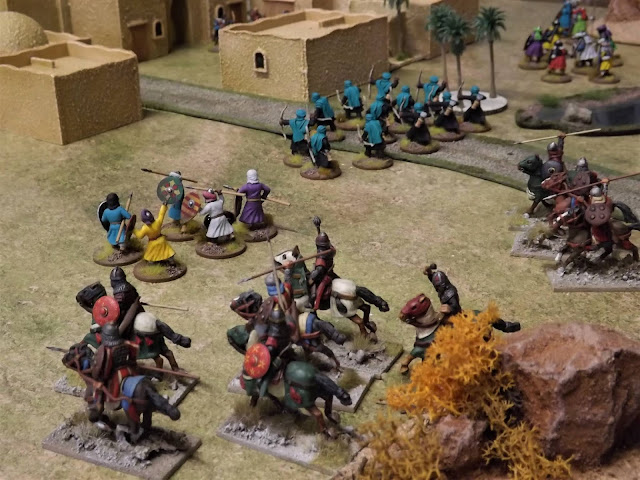 Back at the north end of the village the fight between the Arab heavy infantry and the mounted knights is intensifying. Sensing that a pivotal moment is approaching, two more units of Arab medium horse archers are diverted away from the southern end of the village to support their leader and the fanatical heavy infantry and the other unit of horse archers. This leaves the Arab light infantry and archers unsupported. When they are hit by the Frankish crossbows again, the light infantry flee the field leaving the archers exposed to s pincer movement by bidowers and crossbows. 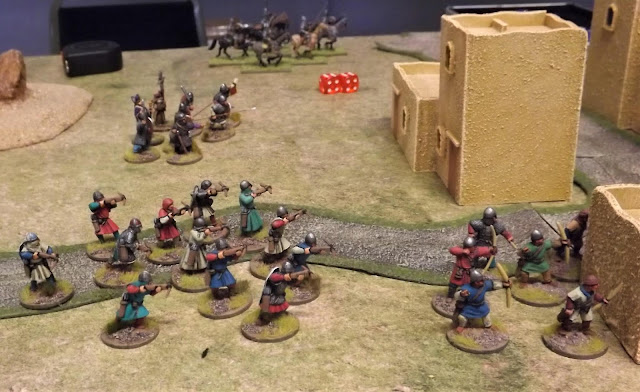 At the north end of the village the fanatical Arab heavy infantry units throw themselves on the Frankish knights. Casualties are taken on both sides, but as the knights pull back, this leaves room for a fresh and full-strength unit of Frankish heavy foot to charge the depleted Arab heavy infantry. In the ensuing melee, the Arab holy man is killed. Despite this the Arabs stand firm. The bidowers fleeing the village with the Friar now start to make their escape. The three units of Arab horse archers are ground down by the Frankish knights and heavy foot. They fight to the last man, but it is now clear that the Frank's have total control of the village and the cup (or chalice) is now well and truly secured. The Bishop will be pleased!
Posted by carojon at 08:39