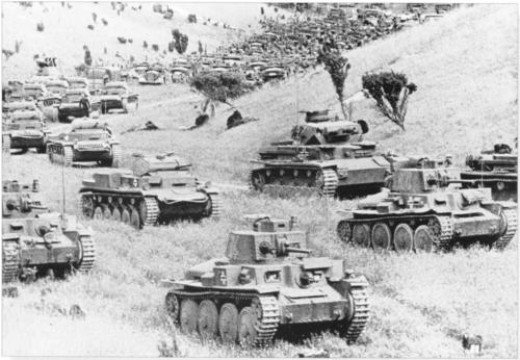 One of two games ran at last months meeting of the DWG was this large Chain of Command 1940 set to which had lots of stuff out on the table. The scenario was a Operation Sealion "what-if" game. The Germans had seized a vital bridge with a sneaky Fallschirmjager landing, preventing reinforcements for the LDV force trying to stem the German breakout from the beaches. 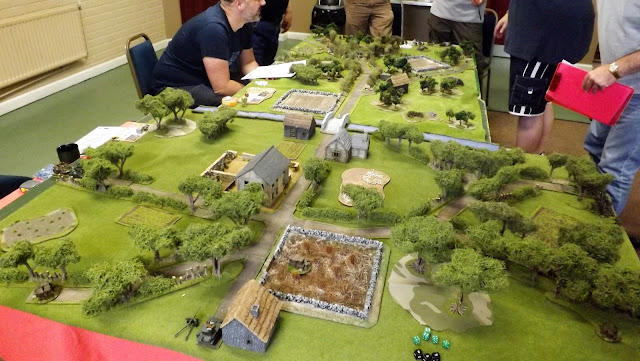 I am not exactly sure how this game turned out as I was running the Target for Tonight bomber game, but I thought you might like to see some pictures from the this game.
The Germans had 3 forces, a Fallschirmjager platoon at the bridge holding until relieved, with an infantry platoon and an ad-hoc Panzer platoon trying to break the British defensive line at the far end of the table. The British also had 3 platoons. An LDV force was dug in on the far table, attempting to slow the German advance. On the nearest table a regular infantry platoon with mixed armoured platoon in support were rushing to join them, only to find a bunch of sneaky Germans in their way. 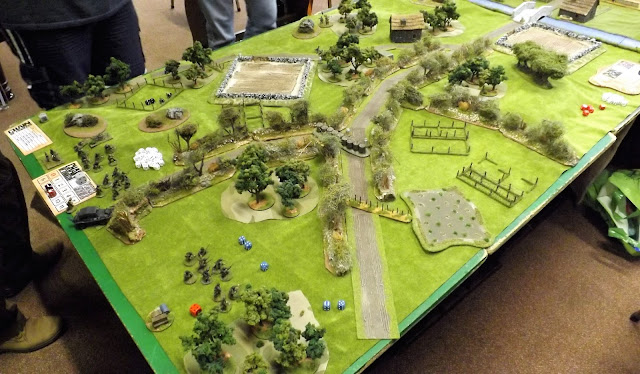 The German advance from the landing zone, facing a lot of mines, barbed wire and roadblocks along the way. Initial forces were infantry only, using them to find the defenders before the armour arrived.

German's advancing bravely. They did this for a while, then some old fellas started shooting at them and they went to ground.

As you can see the chaps in the club have a nice collection of WWII kit in the larger scale which really helps bring the platoon level game alive with sections of men very much core to the system.  The German commander skulks behind his men leads from the rear! Brave chap that he is. 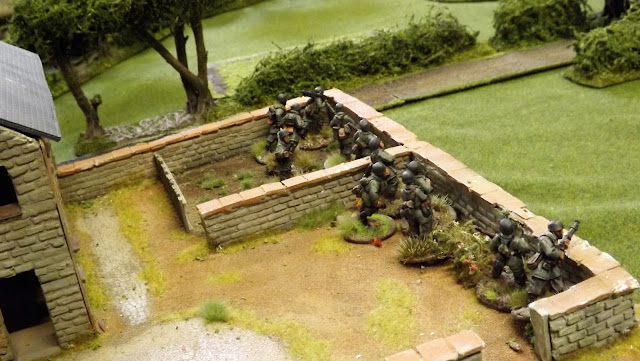 Meanwhile the Fallschirmjagers prepared themselves for combat. In the distance they could hear tank tracks and engines, but whose were they?

Its also nice to have a change to the early war period and no Tiger tanks anywhere to be seen. Nathan did want to use a Tiger tank, "It could be a prototype" he said. Instead the Germans had a StuGIII, Panzer II and Panzer 38t. The advancing infantry had revealed a couple of sections of LDV troops, so the Panzers arrived. Also visible here is an engineer team trying to clear the minefield. Dinner plates upside down you say? What a sneaky trick.

With a platoon commander in a "State of the art" Panzer III! His advance was stalled by the roadblock and some suspicious looking milk churns. 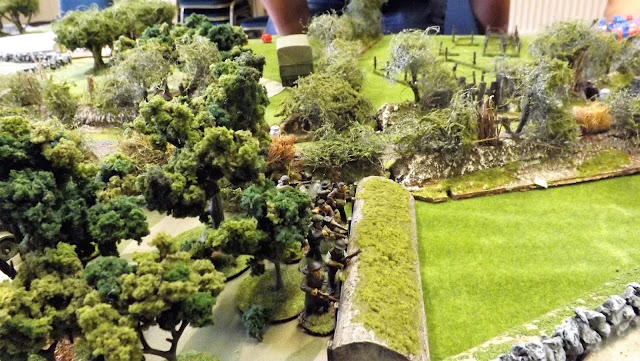 That said the equivalent of a Tiger for this period did put in an appearance with a Matilda II rumbling around the French lanes. The Matilda is awesome, unless you need to shoot some infantry, then it's lack of HE and single MG make it less so. Above are some of the LDV types doing their best to stop the German advance. 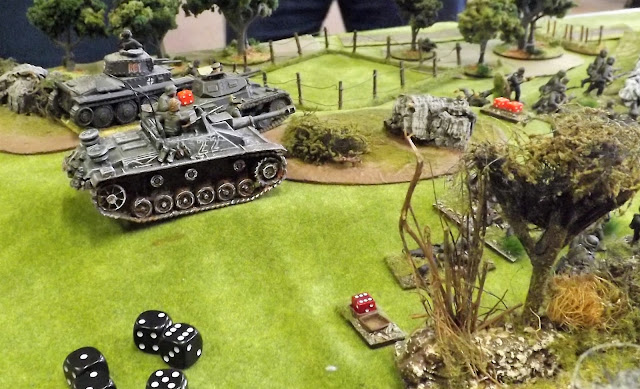 The German armour was very pedestrian, sitting on top of a hill and laying in fire. They got a bit of a shock when a Smith gun starting taking shots at them, even more so when a Boys anti-tank rifle joined in too. Meanwhile the infantry were taking a hammering from 2 sections of old men and boys, one did have a Vickers MG with it though. 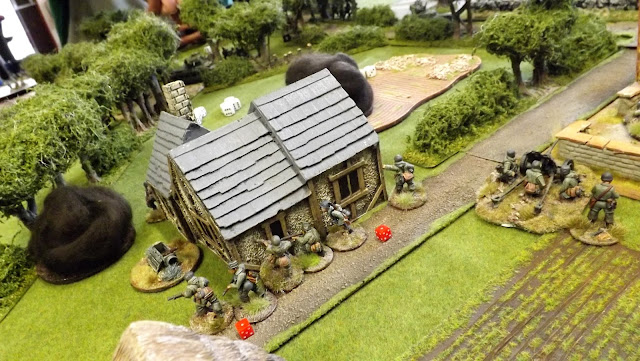 Alongside the German and British armour we had armoured cars and Fallschirmjager on the prowl with anti-tank guns at the ready.  The Fallschirmjagers support was very limited as elite troops don't get much for their money. They did have a nice little Pak36 though. Would it be enough to stop the British armour? 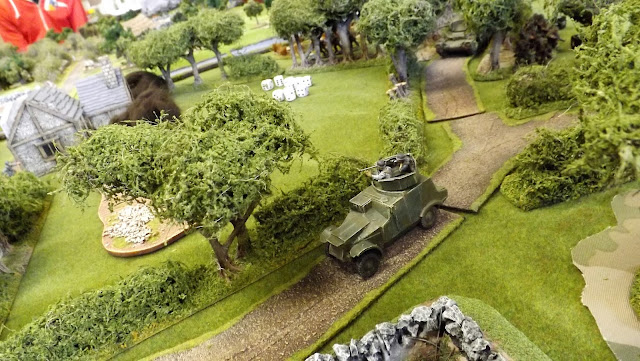 A Morris CS9 armoured car lead the way, with the mighty Matilda behind it.  The British forces had to roll a dice to see where they came on from as they rushed to the sound of battle. 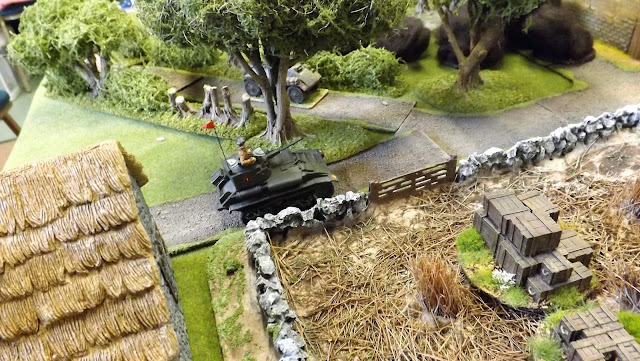 On another road a Vickers VIc light tank arrived, joined by an armoured car. No real heavy armour this side of the table. 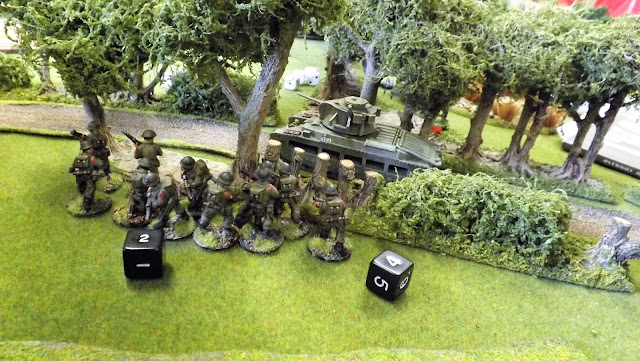 Regular British infantry move up with the Matilda, but lots of German MG34s were waiting for them.

Also available was a small carrier section, 2 vehicles with 3 men in each. We had to make do with late war Universal Carriers as we  don't have any Bren or Scout Carriers......not yet anyway. 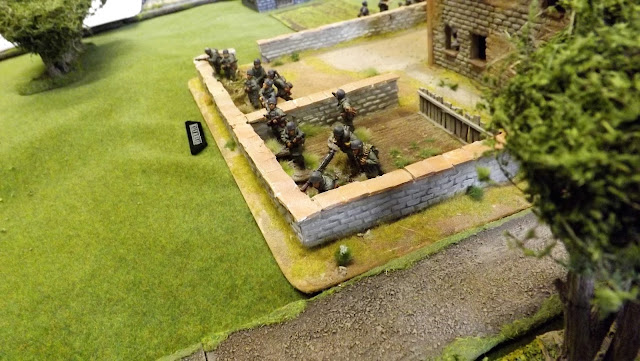 Lots more to come this weekend at the the DWG with a new bunch of games to present.  Fallschirmjagers defend the garden. The end result was a bit of a draw. The LDV got broken, but not before decimating the German infantry. The Panzers were largely untouched, a few minor damages. At the other end the British regulars had been slapped about a bit but they had, with the help of the armour, broken the Fallschirmjagers and were able to seize control of the bridge.

It was a fun game, a bit of a mish-mash of troops and a mixed scenario but it worked well enough and played well with 6 people taking part.
Posted by carojon at 08:25