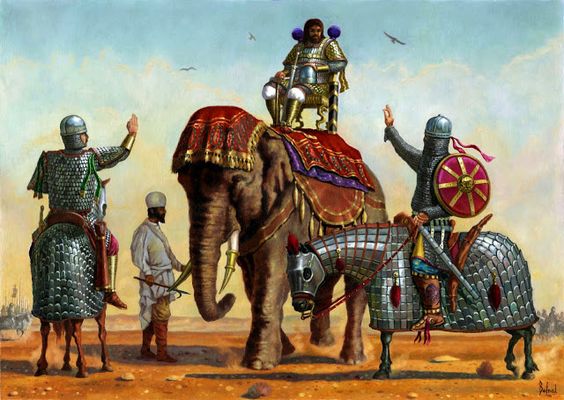 With the deployment of a large Sassanid army to modern day Iraq, the Sassanid empire forced the nascent Islamic state back to the Arabian desert. Having reinforced and reorganised in the desert, Caliph Umar ordered Saad to take his army back into Iraq to bring the Sassanids to battle. Shahenshah Yazdegerd lll, the Sassanid king, commanded his military leader Rostam to move into the south of the country and block the Arabs near modern day Kufa. With more than 50,000 Sassanids facing around 30,000 veteran Arabs, the scene was set for the battle of Qadisyyah. 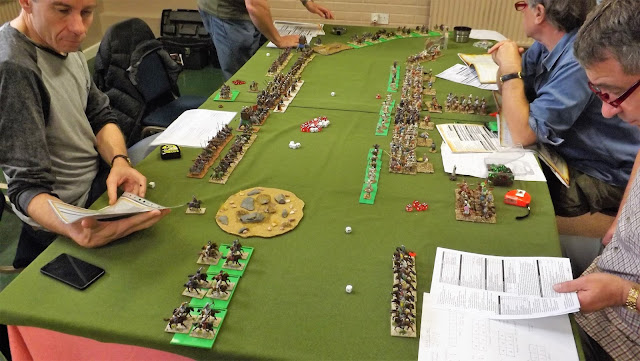 Our re-enactment pitted Chas as Saad, ably assisted by Steve M & Steve H, against Andy C as the child king Yazdegerd lll and myself as Rostam. The battle was played to Swordpoint rules in 28mm. 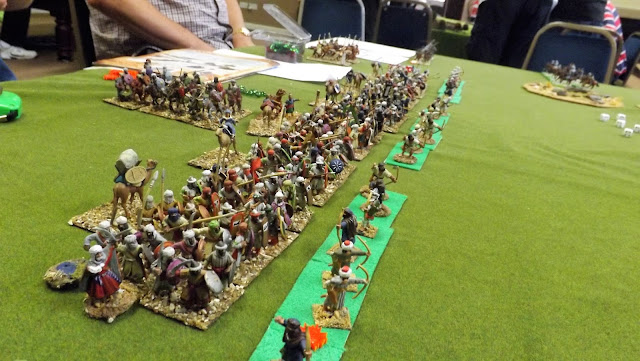 The Arabs used a "stratagem" to force the Sassanids to deploy first. There were no great surprises in our dispositions, with our centre being made up of militia and levy infantry, with a mix of spear and bows, supported by a unit of elephants. On either flank, cataphract cavalry (upgraded Azatan nobles) and Azatan clibinari horse supported the infantry, with horse archers on both flanks and another elephant unit supporting the left flank cataphracts.

The Arabs deployed their religious volunteer infantry in the centre, supported by tribal foot, with heavy cavalry and tribal light cavalry on the flanks. 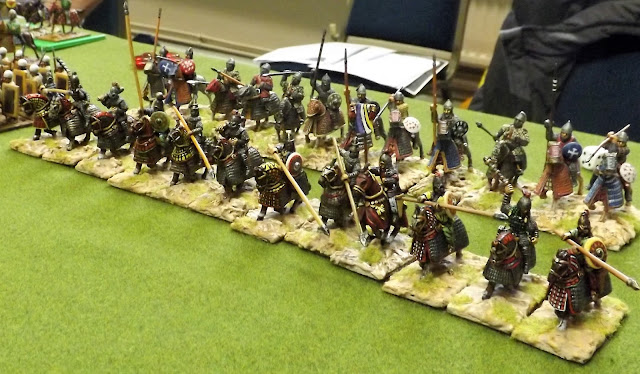 As the Arabs advanced in the centre, they found that every man and his dog on the Sassanid side bent bow and shot. The Arab horse suffered early losses and the Sassanids started to gain "momentum" tokens. These tokens allow useful "pluses" to melee combat results and initiative rolls. 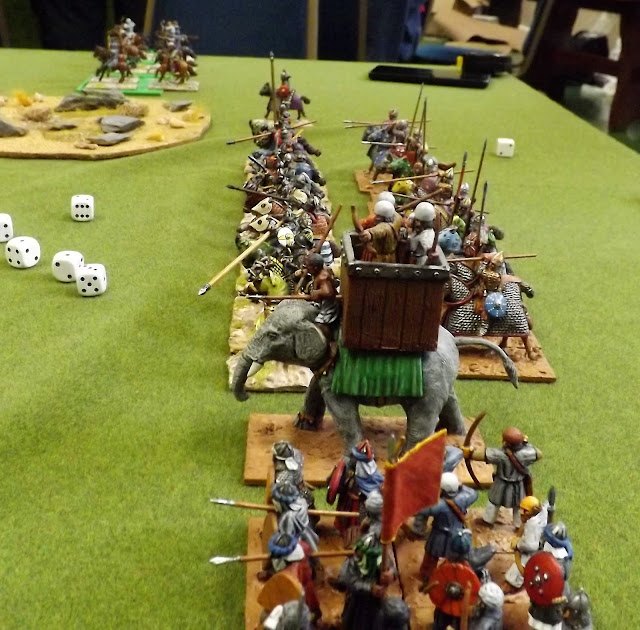 Both side's skirmish infantry were forced to retreat by weight of fire, as the mass of Arab infantry ground towards the stationary Sassanid line.

With the Arab centre getting too close for comfort, Andy ordered the first line of Sassanid heavy horse to charge the infantry opposite them. Meanwhile the horse archers on either flank evaded the charge of the Arab heavy cavalry, whilst peppering their pursuers, thanks to their "Parthian shot" ability. 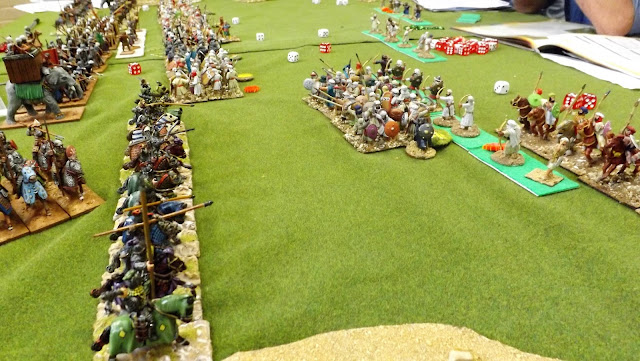 In melee, the Sassanid cataphract and clibinari proved as tough as they looked, despite the Arab throwing spears and the Arabs were forced back. The Arab infantry now charged the Sassanid levy and militia foot and their supporting unit of elephants. A titanic struggle developed with the elephants proving too much for their attackers. The levy held the Arabs further along the line, largely due to the use of "momentum tokens" to influence the combat result. 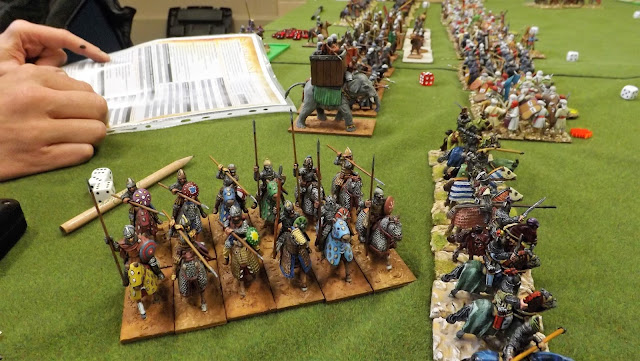 The charge and evade game of cat and mouse continued between the Arab horse and Sassanid horse archers. One horse archer unit did not run fast enough and was driven from the field in the ensuing melee. 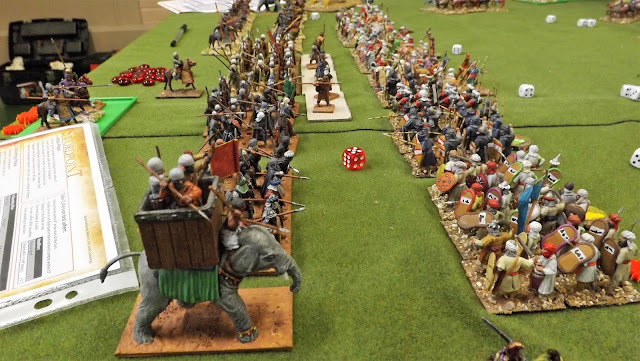 In the centre the Arab foot were still being forced back, but the Sassanid elephant unit was taking hits from the fire of Arab skirmishers. Seeing no sense in being shot at, the elephants charged an Arab religious volunteer infantry unit. The sight of a herd of pachyderms bearing down on them, made the Arabs remember an important appointment elsewhere and they broke. 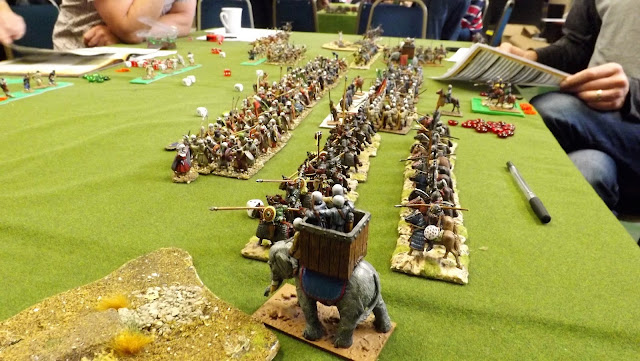 The Arabs had a quick conflab and decided that the day was lost. 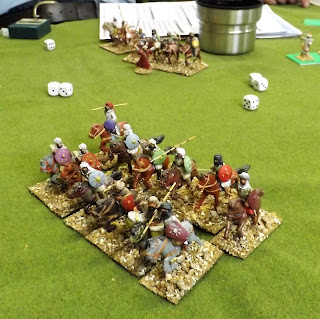 A good fight, to an interesting set of rules, that were on their first outing at our club. I particularly liked the way the momentum tokens worked. They can be gained from 'beasting' units with shooting, successful charges, breaking units etc and allow (limited) additions to combat results or initiative rolls. This leads to some difficult command decisions, as you never have enough tokens to satisfy all the competing demands. In our game a unit of horse archers were sacrificed to allow a +3 added to the combat result in the Sassanid levies combat. This was a crucial melee, despite the quality of the participants! 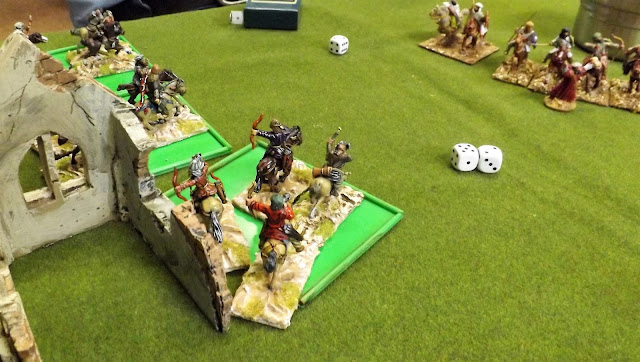 One of the few games where I have seen the same number of elephant units finish the battle, as started it! That said, elephants are very brittle and vulnerable to missile fire (as they were historically).

Many thanks to all the participants for their contributions and for playing the game in a good-humoured fashion. "Swordpoint" is certainly a set of rules I shall purchase, as I want to see how they work with my Norman and Saxon armies.