Target for Tonight - "The Big City"

Last month one of the games featured was a set of WWII Bomber Command rules entitled "Target for Tonight" (TfT) published by D.W Thomas back in 2000.
https://devonwargames.blogspot.co.uk/2017/09/target-for-tonight.html

I was a little surprised at the interest generated in this, now somewhat old set of rules, and the inability of finding anyone in a position to supply them.

I am at the present reaching out to people I know in the hobby to see if anyone can shed any light on Mr Thomas and his rules and as part of the effort to create a bit of attention to them in that regard I got together with the chaps at the DWG to run a second game using them.


I should say that I haven't played these rules for a number of years prior to these two recent games and looking back through my files on previous run-throughs it strikes me that TfT are showing their age in that the basic concepts and structure are sound and provide a compelling narrative game with a lot of period detail that help set a game in a particular stage of Bomber Command's campaign .

That said the rules seem to me to be unfinished in many respects with a rather clunky mission planning process requiring plenty of flicking back and forth between pages and list of potential events that can affect aircraft as they progress from take-off to hopefully a safe landing via the route to and from the target, that are not intuitive from the first read through.

The game organiser really needs to do quite a bit of prep work for each mission that really needs setting up as part of the rules to allow a speedier process of mission organising that not only includes target plan as seen above but a quick plan for the route as seen below to allow a speedy set up of the tiles.

Thus I present my map based on the map used in Ian Dury's game "Enemy Coast Ahead", suitably adapted to show the various targets colour coded by zone but also nearby targets should aircraft be forced to divert to somewhere nearby.

In addition on re-reading, the rules reveal gaps that Dury's rules covered off quite well, with his use of cards to not only generate events similar to TfT but act as a record of fuel consumed during the flight adding another potential issue of concern to flight crews. Other gaps included ditching in the North Sea and bailing out over occupied Europe and Germany with the potential of escape and evasion for surviving crew members.


I mention these aspects because on playing this game, recreating a deep raid to Berlin, and a follow up shorter, in and out raid on Kiel, the players involved discussed the idea of running a squadron campaign running missions across the period from late 1942 to the end of the war which would need to include that kind of added detail.

These aspects were just part of the improvements we felt needed to be considered. Others included moderating the somewhat over deadly aspects of the events and their likelihood of occurring with the events generating die roll changing from a D10 to a D20 which seemed to give a much more representative risk profile and seemed better to mimic Dury's card generated risks. 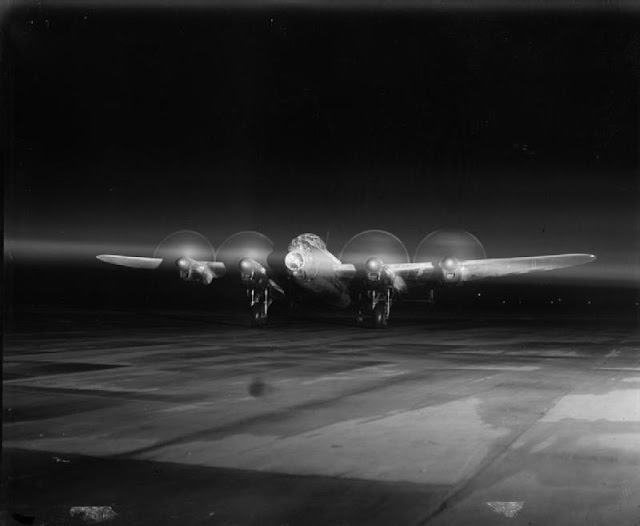 The D20 was played on our Berlin game but even then we considered the events occurrence better modified, the crew responses to them needed yet further modification with the use of a D8 rather than a D10 to give a better profile in that area.

In addition to these slight modifications we added the fuel element by using micro dice, placed by the models on the route to record fuel points used on the flight with hazards such as being chased by night-fighters, dodging flak, losing the route or having to go around again on the bomb drop adding to fuel consumption and possibly posing the issue of when to abort a mission to be able to get back.

Finally a few other modifications considered were


So on with a summary of our game, staging a raid during the Bomber Command Campaign against Berlin which got going on 23rd/24th August 1943 with the first attack by 727 aircraft and which saw a loss of 56 planes, the largest single loss in one night in the war to that date.

Our mission was shown to be taking place in February 1944, the month that saw the heaviest attack on the "Big City", as Berlin became known in RAF parlance, during the whole war with 561 Lancasters and 315 Halifaxes supported by 16 Mosquitos, 891 aircraft in all, delivering 2,643 tons of bombs and losing 43 aircraft (26 Lancasters and 17 Halifaxes) of 4.8% of the total force involved.

Our force of 4 Lancasters and two, novice crew, Halifaxes took off without incident and headed out over the North Sea as seen in the picture below.

The flight to Berlin and back was a true test of endurance for bomber crews and the number of sectors involved with the addition of three flak zones leading up to the target followed by the equally hazardous return journey hopping the channel with all those potential night-fighter intercepts lining the route give a vivid impression of the challenge facing our player-crews, now with the added concern of those little red micro dice recording fuel consumption. 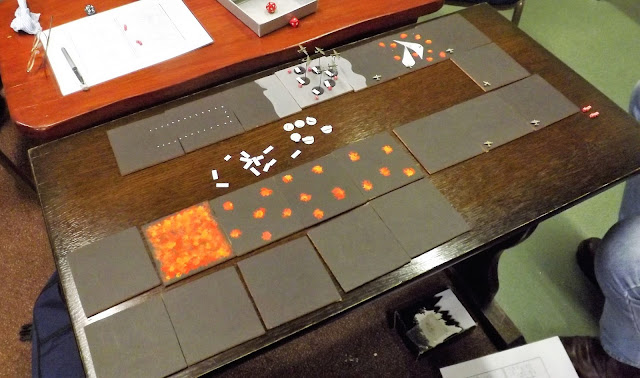 The flight out to the coast and over the North Sea was relatively uneventful except one of the Lancasters flight engineers mis-managed their fuel flow causing engine failure from iced up carburettors and sending the aircraft into an uncontrolled descent until the pilot managed to rescue the situation only to leave the aircraft at a dangerously low altitude likely to draw the attention of the Nachtjagd.

In addition the icy conditions caused one of the Halifax crews to mismanage their anti-icing procedures which left one of the "Halibags" with ice covered wings and at low altitude in a similar situation, but with both crews pressing on with the mission. 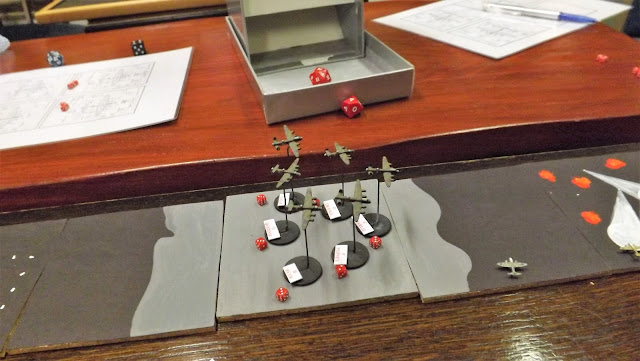 As the six aircraft made their way successfully to the first flak zone it seemed the D20 modification was working well and the players were congratulating themselves on a job well done all be it with night-fighters drawn away by that spoof raid on Frankfurt and the fun of watching a couple of aircraft including a novice Halifax crew needlessly burn up fuel evading an unseen night-fighter with a false alarm on the MONICA beacon sounding in the pilots headset; all this while narrowly avoiding a mid-air colliding with another bomber in the stream whilst taking this avoiding action. 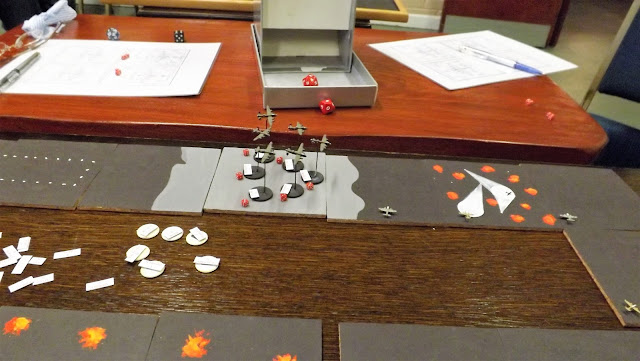 You see as game-meister you can have so much fun with players, watching the forehead sweat beads appear as they desperately try to put space between their bomber and that night-fighter model and make sure they offer the best deflection angle in the process.


Even as the D10's roll to resolve damage from hits they don't know what's happened until the umpire acts as their tail gunner announcing the all clear and an sheepish call of "he must have broke off skip".

As I said everyone was congratulating themselves on making it unscathed into the flak zone with all the aircraft experiencing the buffeting flak when Bob decides to roll a 20, oh dear, how sad, never mind!


The resulting 20 meant that Q -Queenie was struck in the fuselage by a flak shell probably delivered from one of the mighty flak towers surrounding Berlin.

Oh well at least it was a fuselage hit, all the engines are intact, the bomb bay is untouched and so on we go, better just get the crew to sound off and check for casualties.

" Rear gunner here skip, making my way forward, Jonny in the mid upper's had it, so has Dusty and Jim with Dennis severely wounded and his maps and stuff all over the place, plus we have a large hole amidships. I am getting forward to take over the bomb sight." 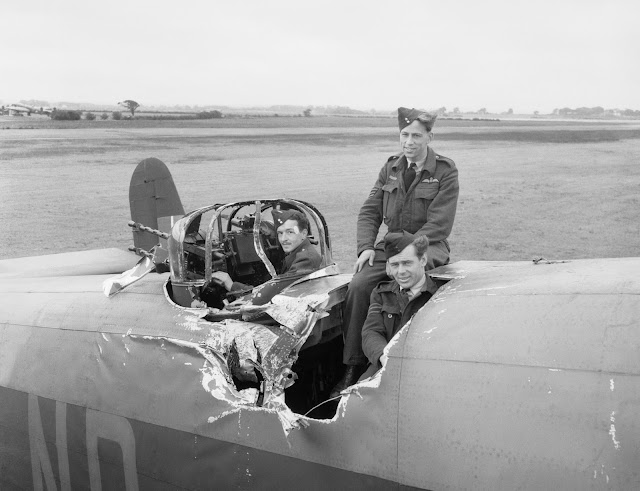 So Berlin was starting live up to its reputation and as the six aircraft lined up for the target in the third flak zone O-Orange took a flak hit right in the bomb-bay causing a massive explosion in the night sky with several crews reporting later that the Germans were using star-shells on the way in.

The bomb run was no less eventful with low cloud and searchlights creating the so called "Ground grass screen" known as Mattscheibe to the Germans, where the cloud masked the target causing in this case a misplacement of the Target Indicators two rows back on the target map and also allowed the search light batteries to shine their light onto the cloud base, silhouetting the bombers to Wild Sau night-fighters operating above it.

S-Sugar was subsequently strafed by a FW190 using the newly fitted radar for single seat fighters which took out the Lancaster's port inner engine and possibly causing the bomber to drop short of the TI's.


The three remaining aircraft unloaded on the TI's with the reports showing hits on the SS Reich Ministry buildings, an SS Barracks and the Flak Park, but with the city hospital also hit (note the Berlin industrial target map has a few additions peculiar to Berlin). The effects of the low cloud base meant that none of the industrial targets were touched in the attack.

The return flight saw the loss of a further two aircraft to night-fighters and C-Charlie on final approach, catching fire and exploding in mid-air as a hung up photo flash exploded pre-landing.

The D20 modification worked really well on this the hardest of missions and with the change as outlined to crew capability rolls it was felt that the risk profile would improve still further. In addition the fuel dice added yet more tension as players watched nervously the results from various manoeuvres carried out during the flight.

On the second quicker mission to Kiel, six aircraft set out with one lost to a night-fighter and five safely returned but with only one of the four managing to bomb the U-boat factory, with the others all bombing short due to jittery bomb aiming.

Still stuff to do with this game but one we all felt has great potential once the issues are ironed out.

Thank you to Bob, Ian, Jack and Charlie for a fun afternoon with lots of drama in the night skies over Germany.
Posted by carojon at 13:33