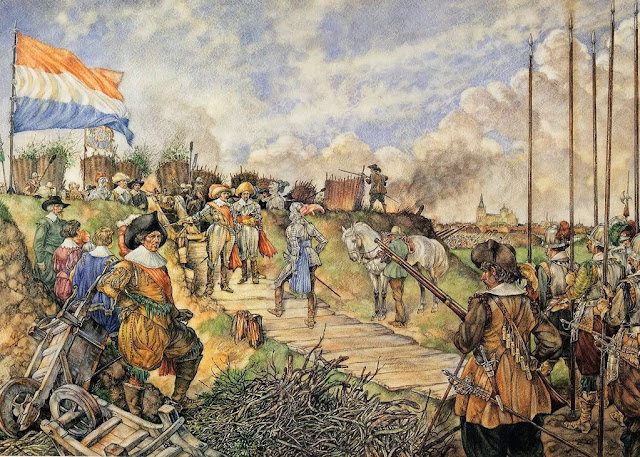 Last club meeting I brought along my figures and terrain to play a scenario set during the Dutch Revolt. For those of you not in the know, the Low countries, as they were known, were part of the Spanish Empire due to a complicated mess of marriages and inheritances. During the mid 1560's however, the reformation, differences in the way the provinces were to be governed (and in particular the division of new bishoprics imposed from Spain) and desire for freedom of worship, caused a bubbling pot of resentment to boil over into open revolt. The resulting wars carried on for 80 years and the latter part being contemporaneous with the 30 years war. My figures concentrate on the earlier stages of the conflict, from about 1568 till roughly the mid 1580's.

Onto the fun bit. An advance force of Dutch rebels had managed to gain control of a small village with an important river crossing. The Spanish garrison had been forced off in surprise and had gone to alert the local commander, who was at the time overseeing the investment of nearby Leiden. The Spanish dispatched a force consisting of three companies of shot, two squadrons of Horse arquebusier and a group of volunteer gentlemen armed with swords and bucklers.

The Dutch on the other hand had sent for reinforcements and a company of pike and another of shot, escorted by two squadrons of Reiters were on their way to support the two companies of shot and the veteran halberdiers hiding in the town. 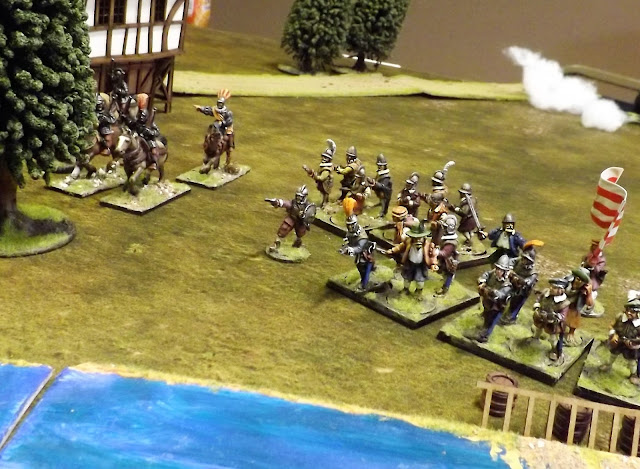 The rebels had built barricades on the bridge and at the ford next to the mill in order to try to slow the advance of the Spanish. 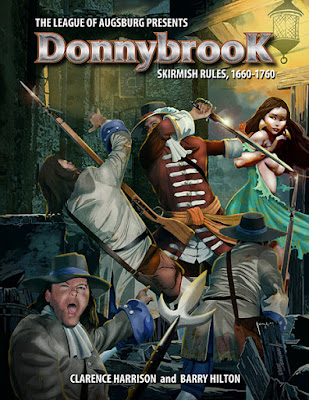 We used Donnybrook for rules which gives a nice bloody game. If you haven't seen these before they are form Clarence Harrison and Barry Hilton who are also responsible for Beneath the Lilly Banners and run the League of Augsburg blog and forum. They are a card driven set of skirmish rules with each of the troop quality types given a different dice (d6,d8,d10) to use for all their actions. 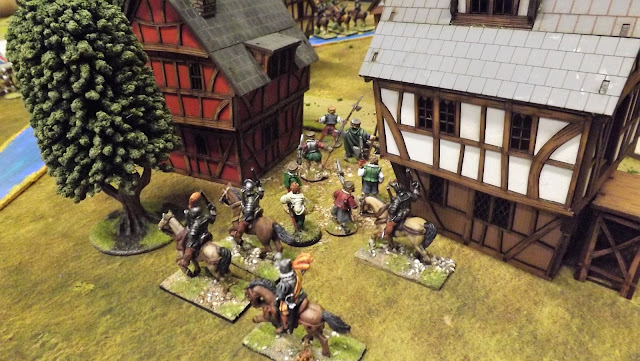 The Spanish made a general advance towards the river to try and to get into range, apart from the gentleman swordsmen who seemed to have forgotten to gain their order from their colonel. The rebels revealed a cannon and fired it ineffectively at one of the Spanish companies. The crew then promptly decided they had done enough for the day and marched off home. The Horse on the left wing shot at the rebel arquebusiers and caused a fair amount of injury.  The Spanish Musketeers used their longer range and their professional attitude to devastate the Rieter squadron that appeared and then destroyed a company of arquebus as they tried to move back into the town for cover. The other Reiter squadron waded across the deep river and charged the Spanish horse who had been thinned out by some of the rebel shot. The Spanish came off decidedly worse. 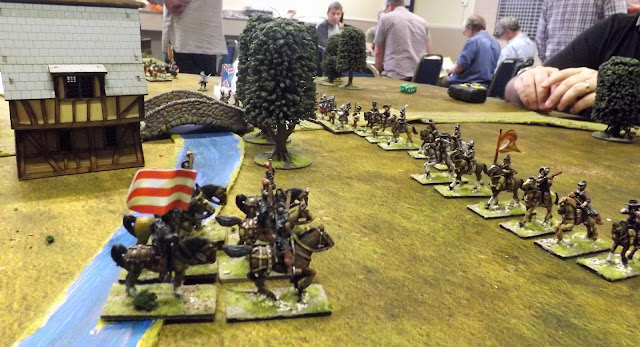 The rebel shot in the centre of town piled into the house nearest the bridge to try and gains some cover from the devastating fire of the Spanish shot but found the flimsy houses were no good at stopping Spanish lead. The Dutch reinforcements reached the edge of the town and one of the pike groups marched straight in to a sticky bog in-between two of the houses (Lord knows what caused that!) and spent a inordinate amount of time skulking out of range of the Spanish. 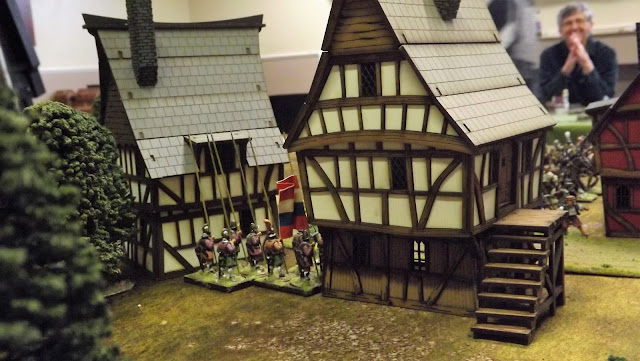 The Spanish musketeers climbed into the mill in order to give themselves an elevated firing position and the two groups of Dutch shot on the other side of the river felt the sting and their numbers quickly dwindled. Meanwhile a company of arqubusiers were attempting to dismantle the barricades at the bridge while the gentleman of the company were attempting to show the peasants how it was done by dismantling the one at the ford. Round about then the Spanish commander decided that, despite the successes across the battlefield, the Spanish couldn't possibly win and immediately ran for home, not even stopping to look back. 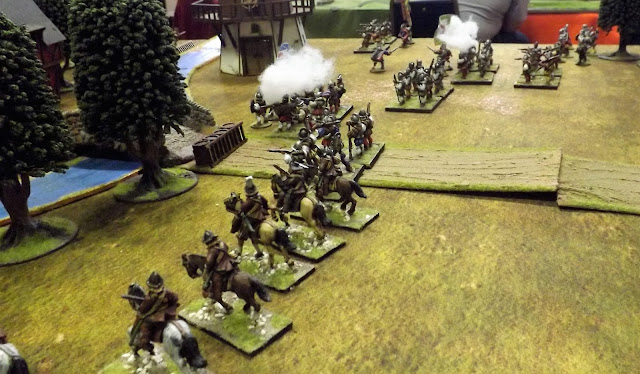 The right of the Spanish line was looking strong but the horse on the left had been destroyed and the centre was having a hard time crossing the bridge as they were charged again and gain by the remnants of the Rieters (one heroic officer) and the halberdiers and them finally the pikemen. Despite a unit of reinforcements coming onto the field to aid the rebels, things were looking bad for them.
The gentleman had come across the ford and were heading for the centre of the village to finish off any resistance and the few remnants of the rebel force were struggling to hold back the tide at the bridge. 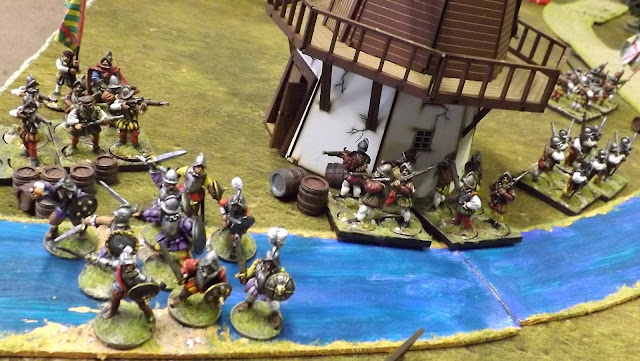 The heroic rebels had given a good account of themselves but it there was little they could do in the face of the greatest army in the world and, despite giving the Spanish a bloody nose, they were destroyed without mercy by the might of the soldiers of the Tercios. 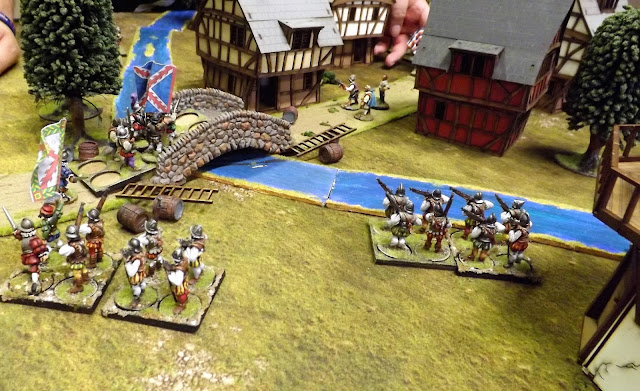 The game certainly gave me something to think about. The Dutch are in desperate need of some musketeers and the Spanish will require some pike (not that they needed them). I also want to try out the Sharply Buffed rules that were published in the Lardies summer special as they are designed exactly for this period. I hope Jason and his son had as much time playing the game as I did running it. Next time I hope to get more players at the table so we can have more arguing..sorry..strategic discussions. 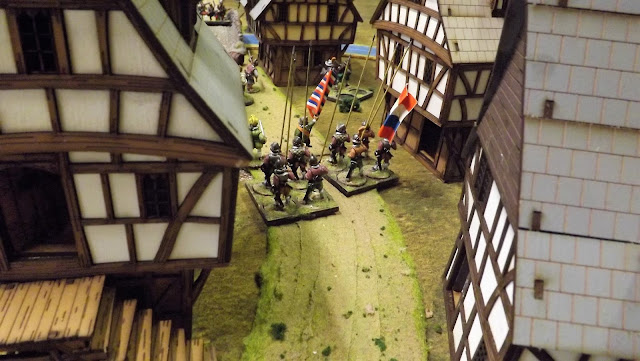