And onto the Ancients game

A Warhammer Ancients battle, fought between Sassanids and Khazars. A report was received from the Sassanid commander, so please take into account the slight bias in his view. Over to you Vince. 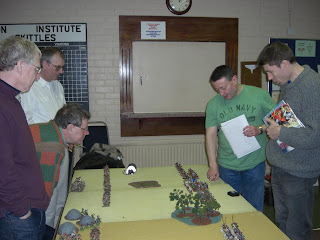 February is over, many dice were rolled

And hopefully much fun was had. Two games were put on, 15mm WW2 by Jon and a 25mm Ancients by Chas and Vince. WW2 first, so here is a brief report.

Here is a picture of the WW2 game set up. A small German force had to hold off hordes of veteran British paratroopers. Outnumbered over 10 to 1(or not), the gallant defenders of the Reich were in for a hard time.(can you tell which side I was on?). The British had to secure the town and hold out until the armour arrived. The Germans had to wake up, defeat the British, capture London and win the World Cup. 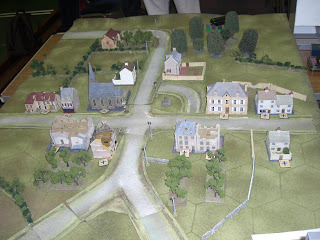 After the first couple of turns some of the Germans had been rudely awakened by a British hand grenade. They promptly rallied themselves and lay down some withering fire, pinning down the Imperialist lackeys and stopping their advance. 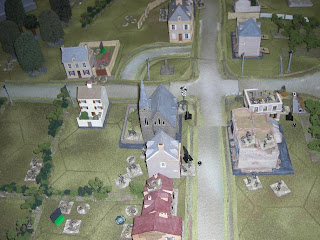 As the rest of the Germans awoke, a British section rushed forward to free the local Mayors daughter from her skirts. The gallant defenders saw this and poured a deadly rain of fire on them, wounding or killing them all. They then advanced and gave first aid to the wounded, despite the evil nature of the British Paratroopers. ;) 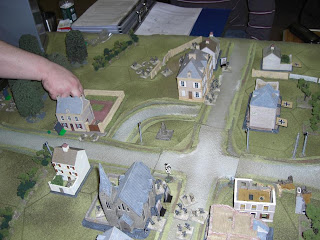 As the game came to an end the Germans held the town, but had not driven the British off. The British did not hold their objectives but had survived until the armour arrived. Losses were very heavy for both platoons of the British, while the German 1st platoon had taken 40% losses.

I enjoyed the game, despite only getting to move 4 times in more than 11 turns. The rules used were an adaptation of IABSM, PBI2 and FoW.
Posted by jcralls at 12:40 1 comment: