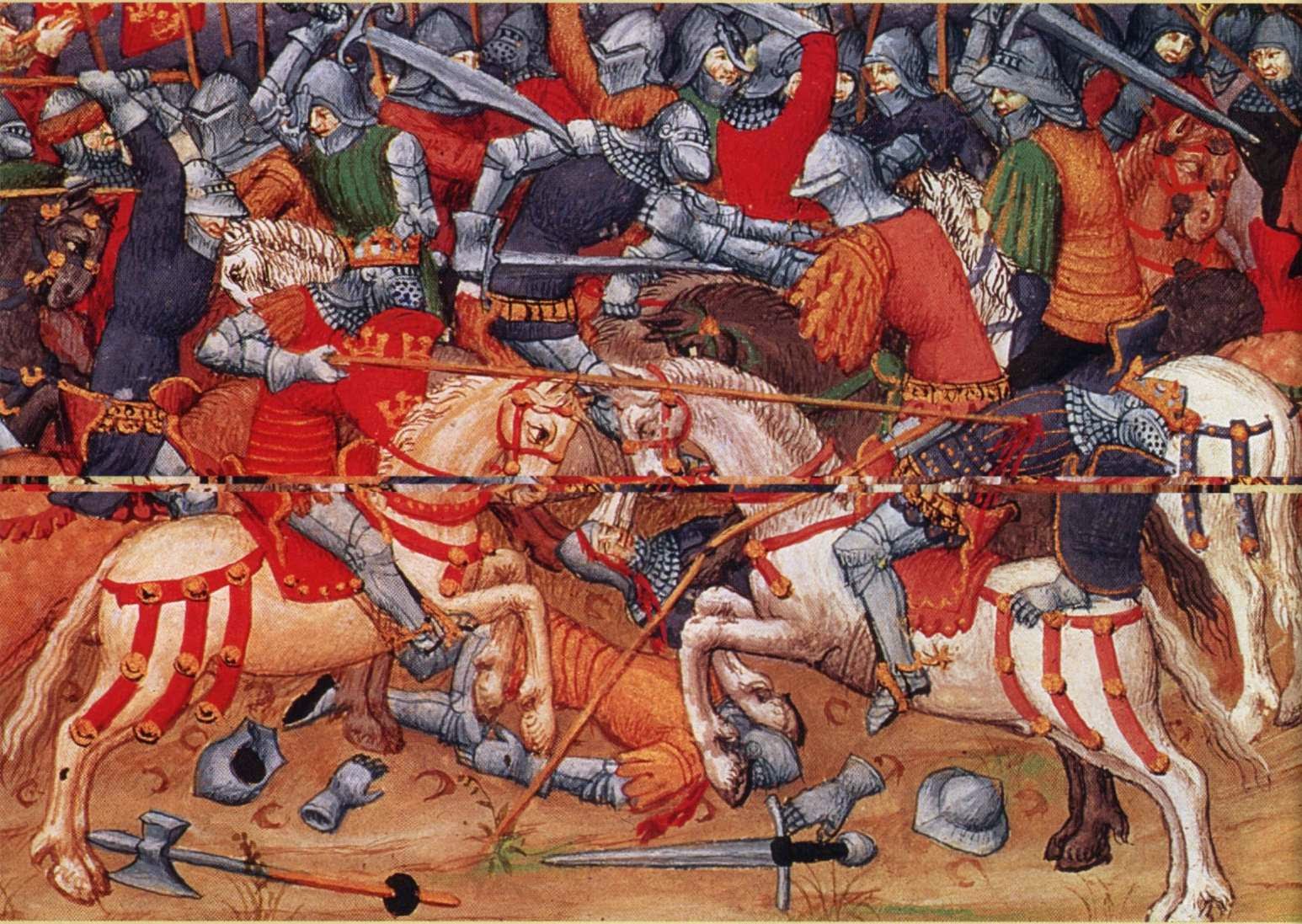 Every now and then we like to go large at the Devon Wargames Group, and our end of year Xmas game always seems to be a good excuse for the club to come together in one game and get all the toys out on the table.

These kind of games are played in a very light hearted spirit, especially at this time of year, and as your humble game reporter, I am often left to come up with a title and background to our clash of arms.

So to set the scene, following his victory at Bosworth, King Henry has only reigned for just over two years when he was killed in a hunting accident. All that inbreeding within Royalty finally took its toll as it is rumoured he tried to reload his crossbow the wrong way round with the bolt pointing towards him and well, you know!!

With the unexpected death of Henry Tudor, the whole country braced itself for another round of blood letting to decide who would be King and so it was that two new "wannabe's" emerged from the Houses of York and Lancaster the Duke of Exeter and the Earl of Torbay, cousins from different strands of the Plantagenet line, going back to a common ancestor, the love child of Edward III (1312-1377) and a certain barmaid who worked in the Rose & Crown in Honiton where Edward had his lodgings on a trip to Exeter to cut the ribbon on the new bridge liking the City to St Thomas's.

Fact is often stranger than fiction, but it turns out that these two families are still in Devon today and both Andy and Nathan were able to represent them in our game being distant relatives of the two nobles in question and Edward and the Inn keepers daughter. This also explains the unusual DNA discovered in King Richard III's bone analysis earlier this year. Andy and Nathan are involved in the search for Richard's relatives and have both had mouth swab cell samples taken last month.

So to the clash that nearly re-wrote the history books on the Wars of the Roses. A few notes first will help the reader get a sense of the dynamics at play in this titanic struggle in the Blackdown Hills on the Somerset/Devon border.

First, this battle involved a lot of cousins and close neighbours and the inevitable blood feuds had sprung up during the long years of war. In our re-fight any opposing nobles engaged in fighting units with blood feuds could issue personal combat challenges to decide the fates of the forces in their battle. This was a rule that got used a lot in our game and quite a few old scores were settled and several nobles ended their days as foot stools in their nemesis's campaign tent. In addition, any enemy nobles defeated gave personal honour in the form of points to the victorious noble along with any enemy units driven from the field of battle.

Second, given the nature of warfare in these troubled times, you could never be really sure who was on which side, rather like what goes on in modern politics today. Thus there were rumours circulating that at least one noble in the other camp was liable to change his colours when the opportunity presented.

With the commanders and their forces set up, the respective leaders constructed their orders of march with the van, centre and rear battles nominated. This would be the order that the various battles would arrive on table or be held off on potential flank ambushes.

With Andy (Baron Blackmore) leading the House of Lancaster and Nathan (Baron Goodyear) for York, the units started to arrive on table and it seemed to groan under the weight of all the metal and a few plastics.

The Yorkists made an aggressive thrust at the opposing van with a charge of massed mounted knights into the opposing billmen and archers. The fighting became confused and bloody and both sides struggled to gain an advantage.

As the struggle between the vans continued, more forces started to appear on either side of the fighting units as the opposing lines advanced to support their neighbours or grab important terrain. 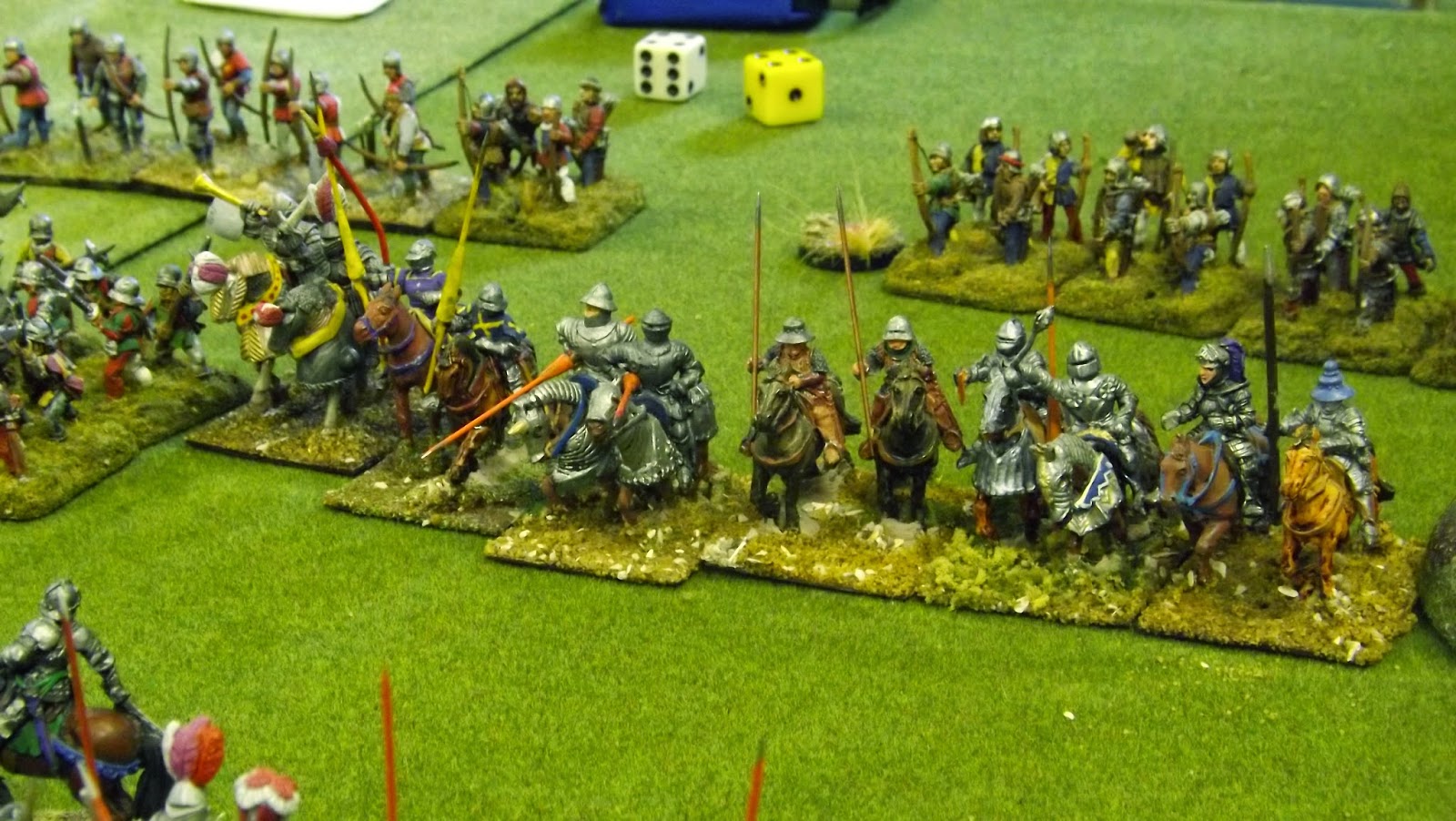 With the fighting close to the centre of the Lancastian line at full tilt, the left flank was surprised by a Yorkist flank march of mounted and foot troops.


With both armies deployed and battle royal joined in the Lancastian centre and left flank, the Yorkist forces had the upper hand. The fighting was fierce as the Lancastian left deployed their "Darken the skies with arrows" tactic. Yorkist archers were decimated in the arrow storm.

Calls of "Yield" were issued by Yorkist commanders as they sought to enforce their advantage.


Both commanders "girded their loin"s and sent heralds along their respective lines promising wealth and titles for one last push. 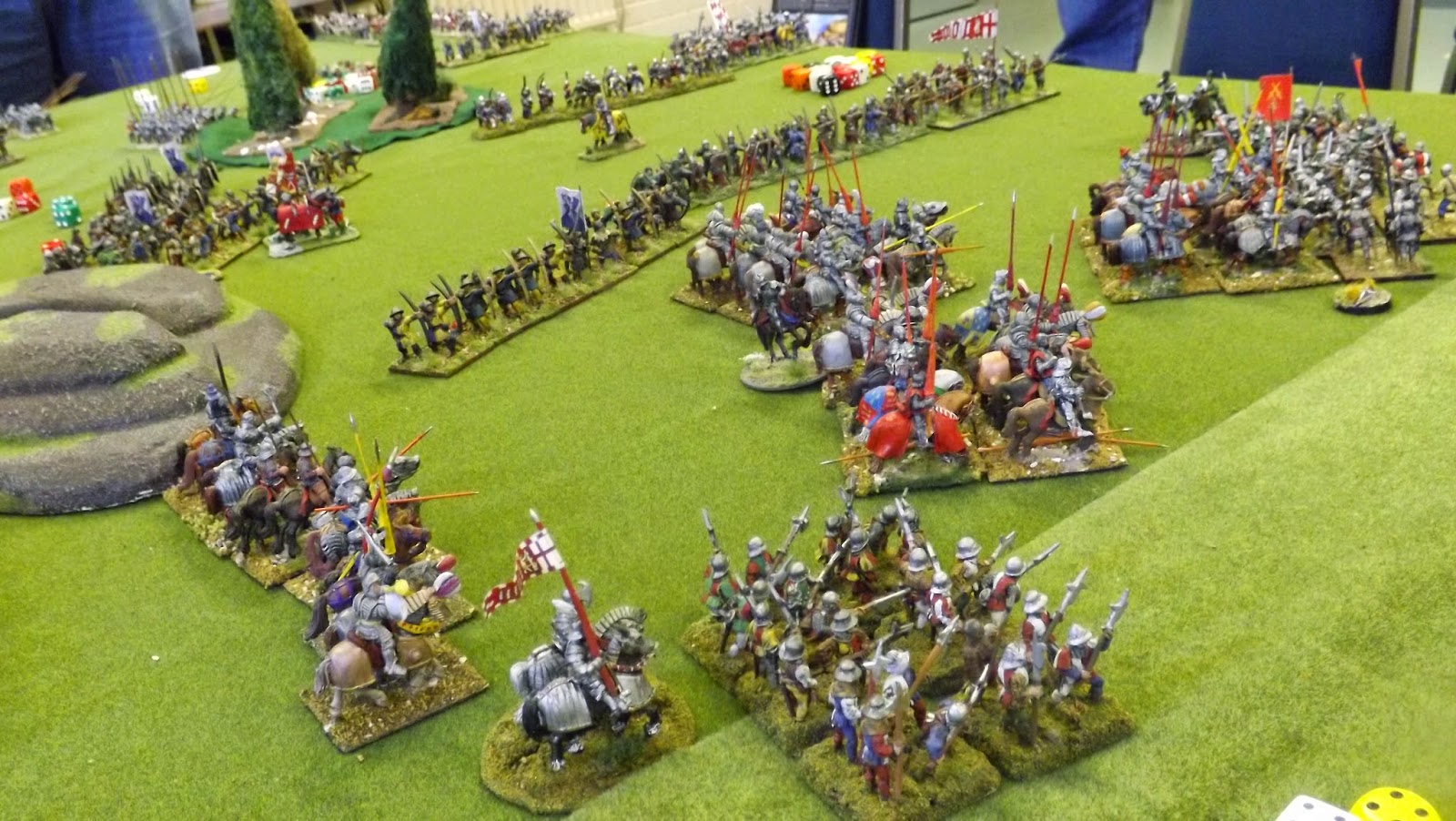 Desperate to swing the fight in favour of their respective camp, treachery started to reveal it's dark plan. Sir Stephen of Cardiff, a Devon noble banished to estates in South Wales for unnatural relations and concepts in animal husbandry, revealed his true Yorkist sentiments and added to the woes of the Lancastrian centre. In response, the Sir Lancelot of his Peers, Sir Stephen of Lympstone a man who preferred to do most things on the back of a horse suddenly announced, after gutting the Lancastrian centre with his "mounted joustabouts" that he really was for Lancaster and hoped for a spirit of forgive and forget to prevail.

The stress of the consequences of failure were starting to tell, or perhaps it was the desire to get down the pub for a Xmas tipple, either way, the personal challenges started to fly. It started with the most personal of blood feuds as Sir Jon, Baron of Exmouth, fuming with rage at the disloyalty of his son, The Honourable Sir Thomas, issued a personal challenge and, although chastising the errant lad with a breath taking display of swordsmanship, left the lad standing and returned to the cheers of his followers. This was to prove a mistake as Sir Thomas, boiling with rage led his men in a fanatical charge breaking two of his fathers units and capturing the old man. 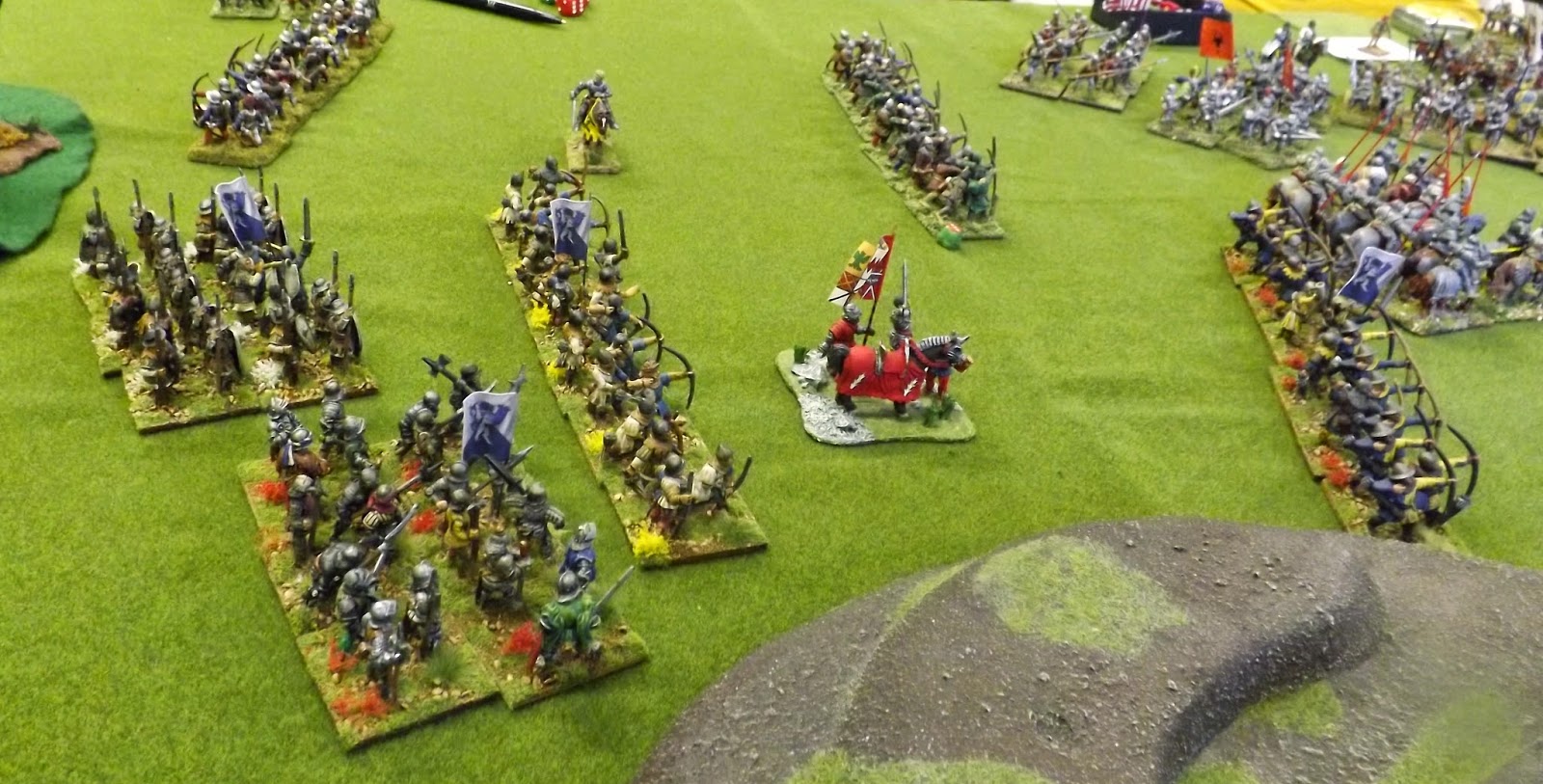 The day started to lose the light as the fighting broke down into personal little fights all along the line. No quarter was asked or given, noble footstools were being fashioned throughout the opposing camps as personal challenges were decided.

With the battle very much in the hands of the Yorkists, Baron Blackmore decided to make one last desperate roll of the dice. He issued a personal challenge to his opposing contender. Sir Nathan, Baron Goodyear, Lord of the Isles, Protector of the Faith and Lord High Commander of the King's Chamber Pot. The Baron Goodyear, never known to back down from a challenge to his honour, said "no thanks, not when I'm winning and about to get the job of being King". 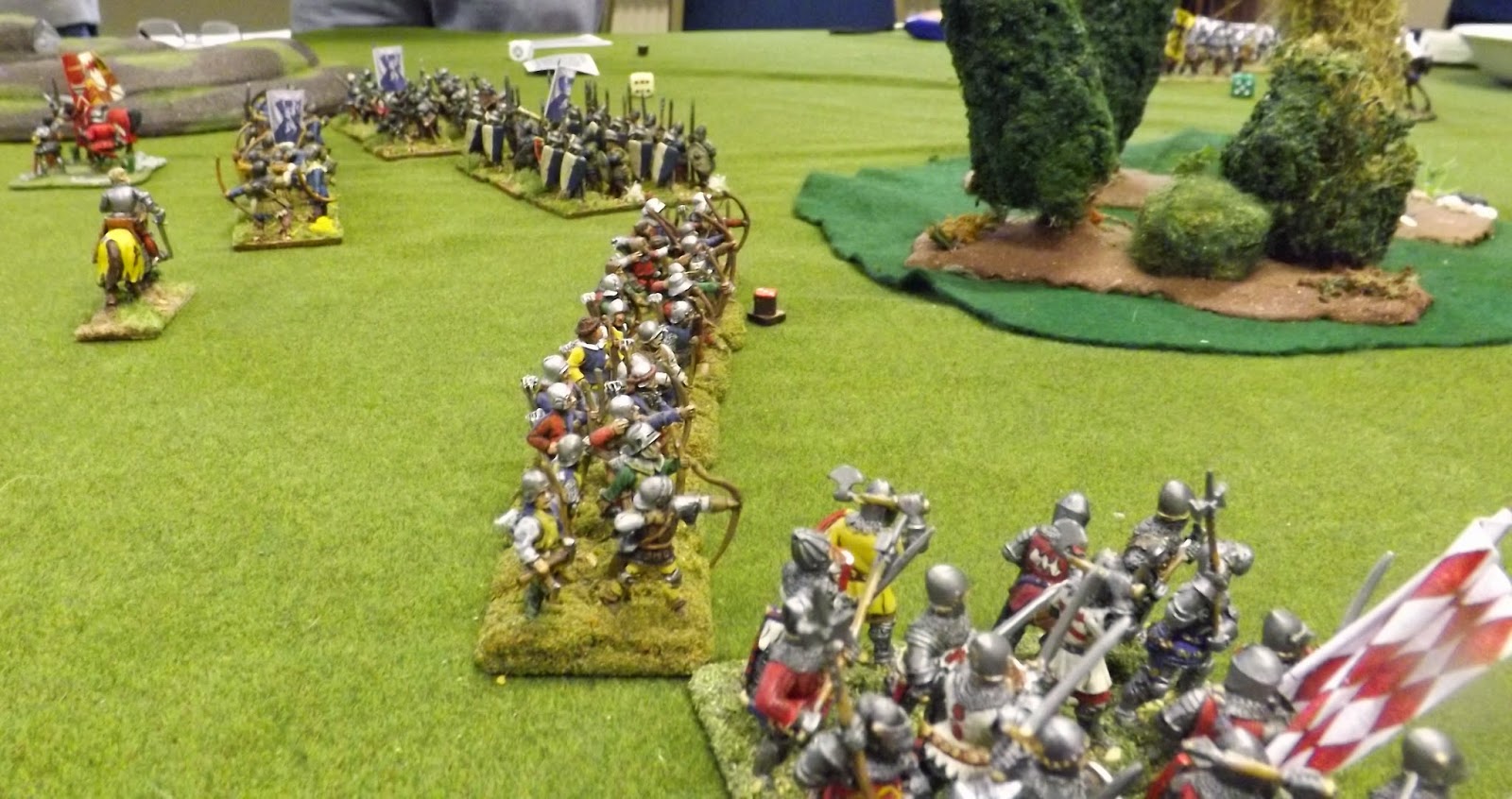 In the face of such implacable determination, the Lancastrian forces broke contact as darkness fell, quitting the field and headed off towards the rallying point at the Queen's Head.

The day was for York and the honour went to a young noble Sir Thomas of Exmouth who bagged double points for taking his Dad prisoner in a blood feud and breaking two of the enemy units. 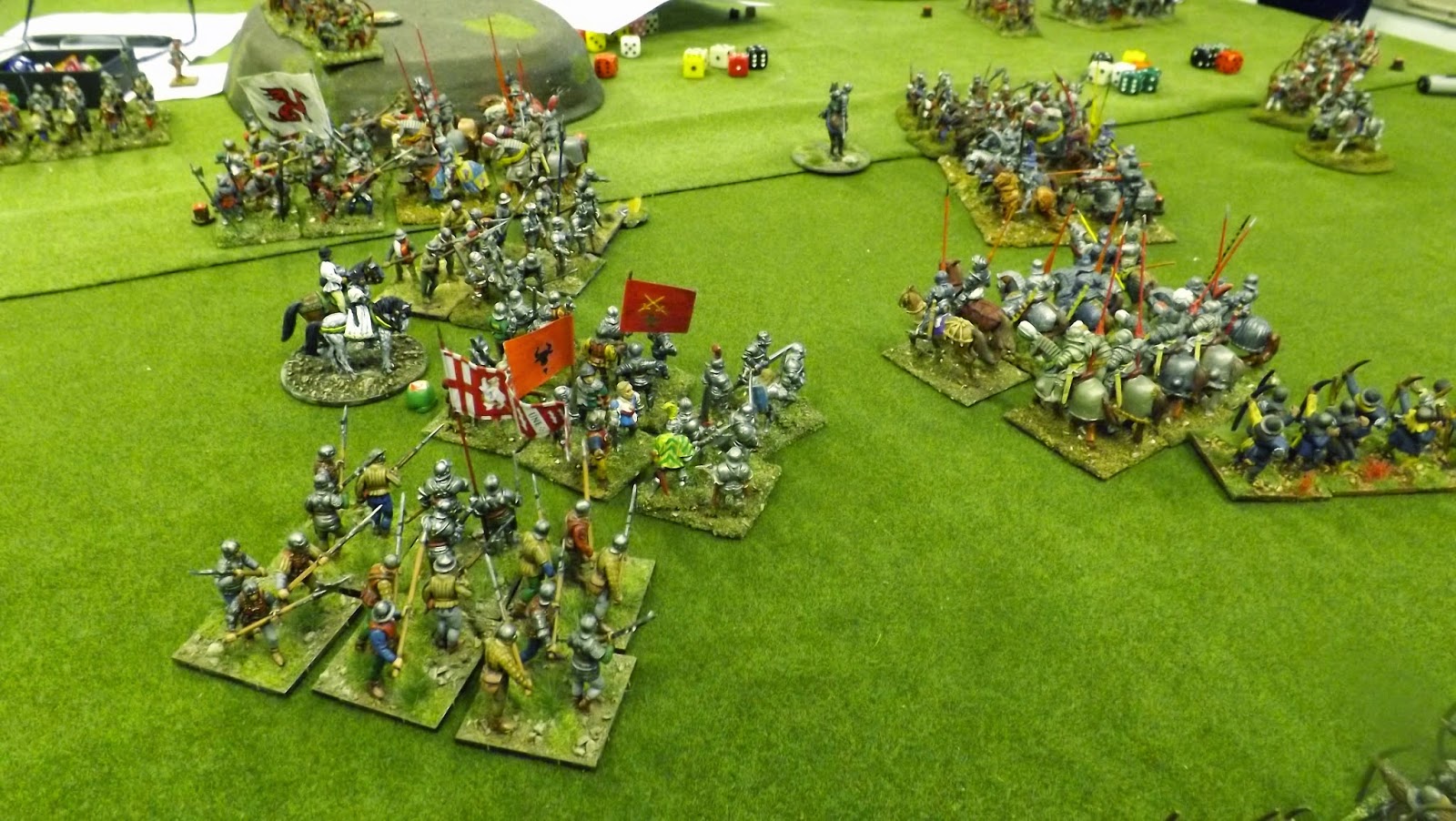 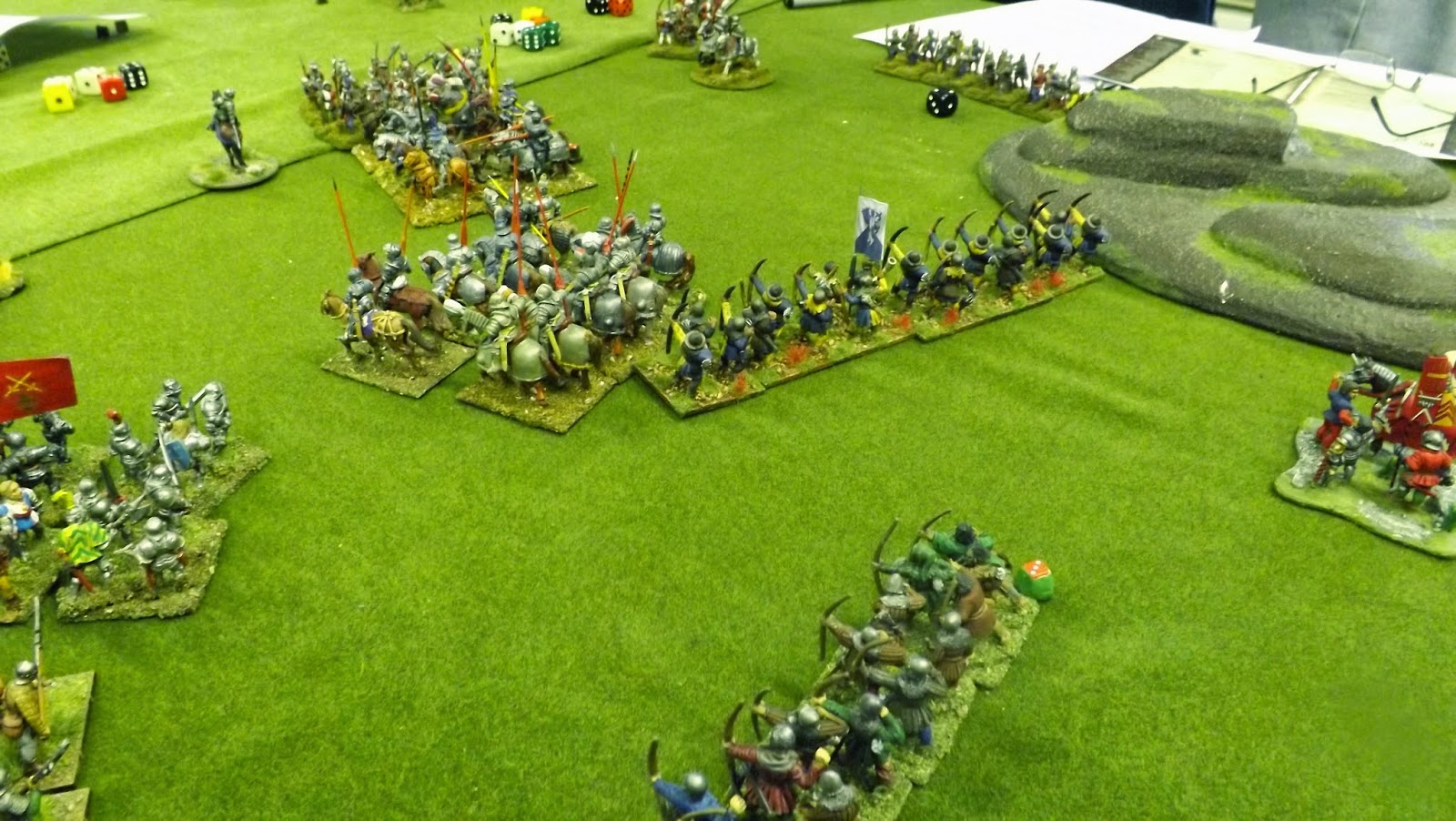 So as the dust settled and the armies returned to their camps, it was left to the camp followers to pick over the debris of battle. Their resources had been pillaged by the two opposing sides and their winter supplies entirely consumed as the two forces engaged in this mighty struggle to be known as the Battle of Dunkeswell Down.
And what became of the two pretenders to the crown? I hear you ask. Well Baron Blackmore fled to France dying two years later in poverty and madness after his defeat but instilling a burning fire for revenge in his young son who returned to the westcountry, but lost his titles in a game of dominoes, trying to raise funds for a new campaign.

The victor of this tale also suffered an ignoble end failing to get back to Westminster for his Coronation after picking up a dose of the pox after a night out in Exeter to celebrate his recent victory. The rest as they say, is history.

Let the ballads say that much fun was had at the DWG 2014 Xmas game, with much laughter and banter prevailing. Thanks to Gamemeister Chas for pulling the scenario together and managing to herd cats.