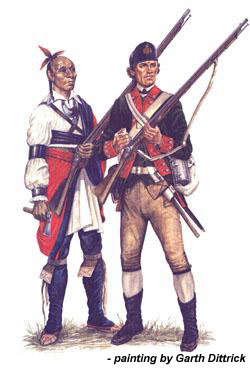 Background
In the fall of 1780 Lt. Col. Sir John Johnson, illegitimate son of the famous Sir William Johnson and commanding officer of the Kings Royal Yorkers, lead a raid into New York with the express purpose of razing the ripening crops in the valleys of the Schonharie and Mohawk rivers.  Joining him on this raid was his half-cousin Joseph Brant with his Mohawk followers, and Lt. Col. Walter Butler with his Rangers.  With the addition of some British regulars, Hessian jaegers and small independent companies, the total force numbered somewhere between almost 900 men.


New York Province was by no means universally in support of the rebellion.  In fact it is questionable if there were ever much more than half the population that could be counted as “patriots”.  Thus Johnson knew he could rely on Loyalist (a.k.a. Tory) sympathisers for information, supplies and even recruits.


Arrayed against the raiders were the various militia units of New York.  Training and uniforms were scarce for these men, but when they fought in a natural skirmishing style they performed better than their senior officers would have given them credit for.  They chased Johnson and his men up and down the valleys, in a deadly game of cat and mouse, gaining strength in numbers all the while.  This game came to a head at Klock’s farm late in the afternoon of October 19.


Van Rensselaer’s militia skirmished with Johnson’s force as it drew up behind a stream.  The better trained Loyalists stopped the Rebels in their tracks but were too distracted to detect a flanking movement through the wooded highland on their left.  The Tyron County militia, sneered at by Van Rensselaer, came pouring out of the bush and sent Johnson reeling back.  Darkness and exhaustion from constant marching prevented an effective pursuit and the Loyalists slipped back up the valley, their strategic mission of denying supplies to Washington’s army accomplished.

The Game Set Up
Rather than a standard deployment the nature of this battle was more of a chase.  The Loyalists aren’t interested in hanging about or advancing.  They need to be off with as much booty as they can carry, and burn what they can’t.  Accordingly, the game is played along the length of the table with the Rebels deploying within 12” of the eastern edge and Loyalists setting up anywhere within 2/3rds (48”) on from the western edge.  Just to ensure the Loyalists don’t just dash off the western edge, the victory points are determined by booty and destroyed foodstuffs.

Each barn burned (the large structures on the map) is worth 2 dice to the Loyalists.  Each razed house is worth 1D6.  The rebels get the same dice if the structures remain untouched.  To burn a house or a barn the Loyalists must commit a full unit and have them in contact for a full turn.  (Does it take unit to burn a house?  No, but it forces the Loyalist commander to make some hard strategic decisions.)

“Fort Nellis” is a stone house in which the local farm families have barricaded themselves.  They can’t shoot out but they can defend themselves.  Assume they are a Garrison.  (The Mohawks tried to storm a similarly fortified house down the valley and lost some men in the effort.)

Other structures cannot be occupied.  They provide wood protection to units behind them but otherwise don’t affect line of site.  (Unless you have very small models, these buildings will be way out of whack with the ground scale.)

This was our third game of Maurice and I wanted to try out the "Notables" section of the rules and see how flexible the game could be with a small scale scenario. Over the years I have collected various scenarios off the web and from other sources and so "dug out" one I had played previously with other rule sets and found gave an interesting game. The scenario by Mike Manning was originally designed for "Age of Reason", but I have rejigged the orbats to suit "Maurice".

To add some spice I decided to use some of the Notables to represent some of the junior commanders who led forces during the battle.

As you can see in the picture above the Americans massed their forces by the road intent on slowing the Loyalist Waggon train and hopefully turning the flank and cutting the Loyalist regulars off from their exit route back to Canada.

The Loyalist commanders were keen to amass points by destroying and capturing as much booty as they could before "bugging out". The way Maurice calculates the morale of a force based on the number of regular units it contains, the Loyalists could not afford to take many casualties, with only 4 morale points vs 8 for the Americans. In addition the card play only allows the commanders to carry out limited choices during their play and so the decision to rally units, move units or burn barns became critical as the game progressed. We played that a Loyalist unit had to declare it was burning a barn by remaining stationary during a march move next to the target building.

The American Commander found himself using up cards to close as quickly as possible on the Loyalists to stop their destruction and to slow their withdrawal down. Having to cross disordering terrain also caused occasional stops to re-dress the ranks.

Eventually the first decision point arrived as the militia closed in on the Indians and Artillery drawn up amongst the buildings near the road. The Loyalists had concentrated their card play on the regular infantry force and suddenly found their other group threatened. As they attempted to depart the militia let rip with couple of well aimed volleys wiping out the gunners and crippling the Indians under Brant before they could flee to the woods.


On the militia flank two units turned to line the fence facing Colonel Butler's units. The three Loyalist battalions moved immediately to deal with the threat and with Butler's ability to move his force in difficult terrain without the being disordered allowed his line to threaten to disrupt the militia advance.﻿

However the militia were not to be intimidated for long, and after finishing off Brant's Indians, they let off another punishing volley against Butler's Rangers causing three disrupts and forcing a rally move by the Loyalists. With the destruction of their gun crews and Indian allies the Loyalist forces morale was reduced to one point. They needed to leave quickly.

Colonel Butler ordered the withdrawal, but with his Rangers carrying a further three disrupts he arranged for them to lead off and sprinted for the table edge leaving the British combined battalion and the New Yorkers to bring up the rear. ﻿﻿

The race to get clear of the enveloping militias was on, and with both sides down to only a couple of cards in their hands, it was unclear who held the advantage. However as the first deck of cards was reshuffled and three new cards issued to the Loyalists who were forced to pass because of having used all their last hand, the Americans closed the retreat route off. The Brits would have to fight their way clear.

The Loyalist infantry were carrying disrupts from their struggle to break free from the fields previously so were in bad shape to face off the militia. The first two volleys from the Americans sealed the game and with the destruction of the British combined battalion, Johnson's force broke.


This proved to be an intensely interesting and fun game with two well matched adversaries. The destruction points were close at 12 to the Loyalists and 16 to the Americans. If the Artillery and Indians had evaded destruction the Infantry could have put up more of a fight, and had the Indians fallen back earlier they may well have had a chance to be more destructive to property. Everyone really enjoyed the rules, good game.

Thanks to Martin, Andy, Ian and Steve for a fun afternoons gaming