This year is the 200th anniversary of this famous action in which the Shannon captured the Chesapeake in just 15 minutes of bloody action.

The frigate battles of the War of 1812 were often one sided affairs when rash Royal Naval captains went up against the American super frigates only to find that they were heavily out gunned by these "pocket battleships" of their day. The Shannon vs Chesapeake action was, in those terms, a much more even affair with both ships carrying a similar broadside and crew compliment. 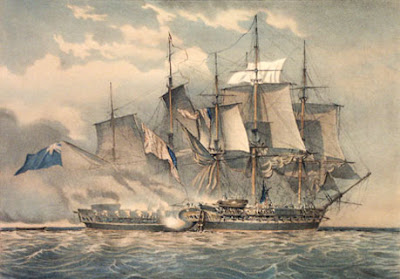 The action though quick was bloody. The Shannon lost 23 killed, and had 56 wounded. Chesapeake had about 60 killed, including her four lieutenants, the master and many other of her officers, and about as many wounded. Captain Lawrence was mortally wounded by fire from Shannon’s fore-top and was carried below before the Chesapeake was boarded. His last order upon being wounded was "Don't give up the ship!".

﻿
Our re fight turned out very similar to the historical encounter. The ships were set up as in the original fight with the Chesapeake up wind of the Shannon, both ships on topsails and mizzen sail sets. The breeze from the North. 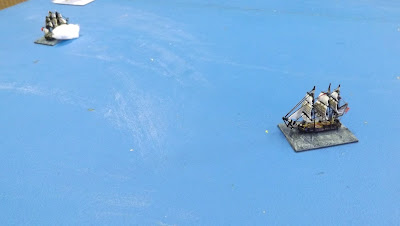 ﻿
The Shannon now had the advantage and increasing sail kept the range down and swung in behind the Chesapeake at close range giving her a triple shotted stern rake as she passed. The American ship staggered under the fire but amazingly suffered no critical hits or lost masts. As the British frigate swept past the American fired off a desperate reply with minimal effect except that one shot took away the Shannon's wheel, forcing the ship to maintain course whilst effecting repairs. 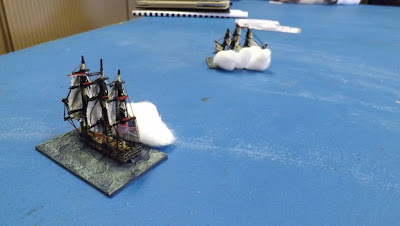 With the range increased due to the damage to Shannon's wheel and the Chesapeake having the wind, the Shannon, after effecting repairs, was forced to tack back towards her quarry to try and end the duel. However the Chesapeake wasn't finished yet and succeeded in causing further hull damage and knocking out the repaired wheel yet again.
﻿
Eventually the two ships closed and the Shannon was able, yet again, to swing in towards the stern of the American fouling her as she passed. The next boarding phase would decide which ship grappled first.
﻿
With the two ships locked together the Shannon got the opportunity to board and requiring 4 on three d6 promptly rolled a 12 sealing the Americans fate and forcing a strike.
﻿﻿
Thus ended what was a very close run fight with both ships suffering over 50% hull damage and with the Chesapeake slightly better off at the end. The deciding blow was the stern rake from which the Chesapeake never recovered causing her a much reduced gunnery effect.

Thanks to Nathan, Ollie and Jack for a very entertaining game. 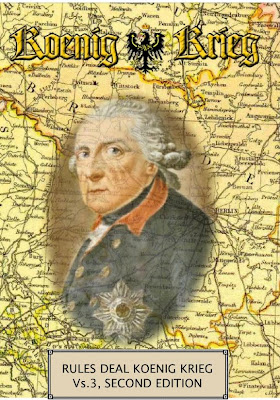 About 18 months ago I decided to have another crack at 15mm 7YW so I scoured the world for suitable rule sets, they needed to be base driven, not figure, To have command and control, give the right period feel to the game and suitable army lists . Now I like a good army list me but can I say in my defence that I don't hold with super maxed out armies so for every Maison Du Roi there has to be some appropriate low life as well. The final choice was Koenig Krieg, so I bought the PDF from Siegeworks and went to check under the bed for the remnants of the armies I had from 20 years ago.
I found some Austrians, quite a few Prussians and a goodly amount of Russians, Obviously the thing to do was to immediately buy Allies and French from Old Glory and get under way. With the figures painted and based up I gave the rules another thorough read through and then started the " how do I" questions to make sure I had a good grasp. Confident that I could bluff my way through a game I found suitable volunteers and organised one of the September games at the Devon Wargames Club.

The armies were 1000 points a side and each had 6 brigades as any more makes using Sub Generals compulsory and for the life of me I cannot see what their purpose is apart from annoying you.
Each had 4 Infantry brigades of various strengths and class, 2 horse brigades and some Light guns .

First is the Command and Control Phase; Any retreating unit automatically rally's, replace leaders, mark any unit which is out of command, move Generals and place Activation markers on each Brigade leader.

To be in command you have to stay within 4" of your Brigadier, if not then you have to throw 1-2 or 1-4 depending on how many combined legs you have.

﻿
Second: March and Volley Phase. Each Brigade gets to activate, Infantry have 1 action and Cavalry 2, so you can either March or Volley, double if away from the enemy, change formation or stand still. Now to decide the order you roll off against your opponent and then choose to move or force the other side to move, this is key to the game. Let me explain why I like this, in most Horse and Musket games there is a great unwillingness to be the first person who moves into firing range and therefore gets shot. This way if the opposing brigade has already activated then you can close in and see what happens next turn.

Perform any morale as it happens and repeat until all brigades have moved.

Third Close Combat Phase. All units with 1" or 2 " ( depending again on accumulated legs)  get activation markers. Again you roll off and again the sequence is critical, defenders can shoot as you charge if they have a marker, so do you wait and see if you can force them to spend it before getting stabby, if so then I can counter this by retiring out of combat range .

There is exploitation after winning a fight and army morale every four turns to check on but enough rules. ﻿﻿

Both sides advanced, the Allies put their poorer troops into a village and hoped that no one spotted this blatant ploy and the Dragoons on both sides headed towards each other. Eventually both lines were just outside firing range and as usual no one was too keen to close in especially against the three British Foot Battalions .

The dragoons clashed and the Allies forced the first French unit back and then exploited, Throwing 5 or 6 makes cavalry go uncontrolled and off they went in pursuit . However in KK retreats are either 8" or 12" ( Leg qty again ) and as movement is only 4" for everyone you don't get to ride down routers, however the French had taken a bashing and lost again the next melee and retreated off the board followed by the Hanoverians in hot pursuit.

Strangely the exact opposite happened with the second dragoon squadrons but fate had something planned for these two units . The infantry had realised that you can move in if the opposing brigades had already activated, so firing was imminent. The British machined gunned down the poor French in front of them (16 man units as opposed to 12 , 1 dice per 2 men , British kill on 4+ as opposed to 5+) but the French chipped away and this  brigade, although badly damaged, still held ground all be it a lot further away and in less numbers (50% of a brigade lost counts on Army Morale even if you are still fighting on). I was worried about the British power before the game as in theory they could, with lucky enough throws, destroy a conscript class unit in 1 shot.

The other two brigades either volleyed each other or marched pointlessly around, however the second French dragoon unit defeated its opponent again and, being well controlled chaps, were poised to charge into the back of the British. The climax had arrived. In the close combat phase the Allies moved first, faced with French infantry in front and dragoons behind, the British foot formed square (yes it did happen in 7YW, just not as often),

The Allies moved again and the remnants of the Dachenhausen dragoons charged the French dragoons (any morale fail at any time for the Allied dragoons  would take them off as they were down to one base) throwing the required 1, then in they went, the French of course, on taking their 'being charged' roll, throw a 6, break and being trapped were destroyed.

Now with two brigades wrecked to one Allied the French were on a 3 or less to keep going (Army Morale every four turns). Skipping to the end, some more people got shot, posh boys on big horses got scratched and the Swiss went home without getting their Muskets dirty.  Allied Victory.

The rules played well, gave the right period feel and there is a lot of strategy in the game not just rolling dice. Of course we must have got some rules wrong but we had a good game.

Last bit.You include your Army commanders in the points total and you can therefore buy, for most armies, anything from Level 0 to Level 3 which is then added to the dice rolls . The Allies had a level 2 General and the French quite rightly was a Level 1 so the Allies had for most of the game +1 on every dice roll. This turned out to be decisive and the Super British Infantry were starting to look very sorry towards the end. Once you have shot four to six of them then they are then going backwards just like everyone else (currently only three battalions out of fifteen with more "low life's" on the way).
﻿
Thanks to Ian, Chas. Vince, JJ and  Clive
Posted by carojon at 18:09 4 comments: