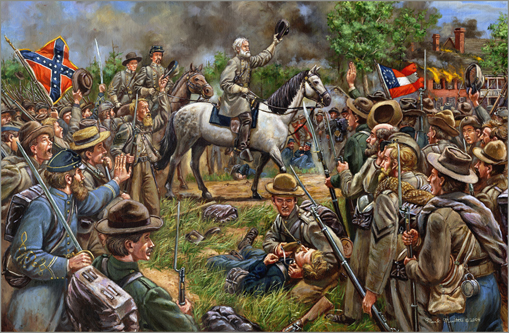 This month saw our traditional end of year big game at the Devon Wargames Group where all members present take part in a single game. The club wheeled out its large collection of 28mm American Civil War figures with three members fielding their collections on the table amounting to just over two-thousand figures. 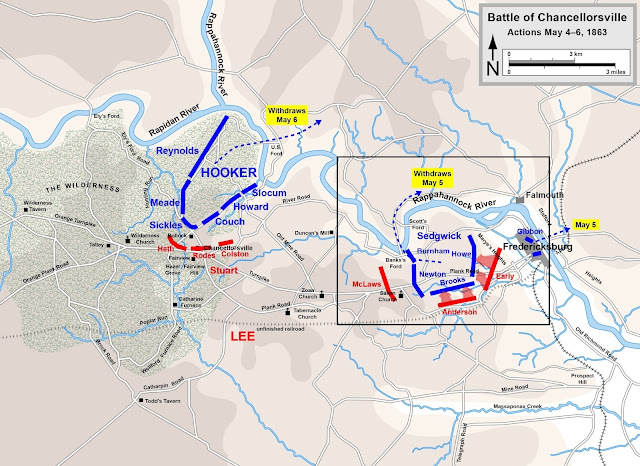 The scenario selected modelled the fighting towards the end of the Battle of Chancellorsville just outside Fredericksburg in May of 1863 as General Lee moved his Confederate forces to attack and destroy General Sedgwick's VI Union Corps astride Marye's Heights. Our battle was constructed around twelve generic Confederate brigades and eight Union brigades each of three, eight base regiments with an attached two gun battery (Confederate) or three gun battery (Union). All troops for convenience were classed as Trained, all guns were treated as "light rifled". Each Division had an eight base cavalry regiment attached.

The rules used for the game were Regimental Fire & Fury which always give a fun game with, some might say, the occasional extreme swing of fortune, but are easily picked up and allow a large game like this to played fairly seamlessly. As you can see, we adopted a generic approach to the scenario that allowed the rules to perform even better with minimal complexity, with the simple mechanism of standardising all regiments at eight stands making the process of identifying "Fresh", "Worn" and "Spent" troops a quick process for noting the condition of the various units. 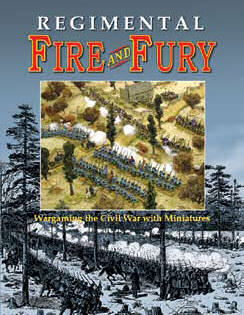 The picture below shows the parameters of our battlefield, with the Union escape route off table, centre top. The blue lines mark the set up positions of the various Union divisions with a corresponding Confederate force set to enter the table from the three approach directions.

As your roving reporter I took on the role of commanding two of General Early's brigades, ably supported by Nathan taking the other brigade of infantry and the attached divisional cavalry. Our Union opponents for the day were the two Steve's, Steve M and Steve H, commanding the brigades of Howe's 2nd Division.

Playing in a game of this size whilst stopping occasionally to do circuits of the table, snatching conversation with commanders on other parts of the battlefield and catching pictures of the action makes reporting on a game like this an interesting exercise in memory management. It makes you appreciate the job of the senior commander in any sizeable action of the period having to write a report home to his political masters attempting to do the same thing, pretty much, only on a much larger and even more complicated scale with often greater consequences for not capturing the essential details.

With the briefing concluded the Union team was invited to set up it troop dispositions, followed by the advance on to table by the lead Confederate brigades.

Nathan and myself were commanding General Early's division attacking the Union left flank, and our plan was simple; drive the blue bellies from the field, capture and hold the road to Scott's Ford and let the the other chaps round up the prisoners. I like a simple plan, it makes it so much easier to explain it to the men.

I therefore boldly lead on General Gordon's brigade and awarded my command figure his special attribute ticket that announced, when the time was right, that my character was known as a "Flamboyant" Southern Gentleman, well turned out in a magnificent uniform and feathered hat, which made me a rather obvious target in the heat of battle and gained me a +1 on the "Fallen Leader" table, but given the inspirational impact I had on the men also implied a +1 to any "Manoeuvre" Test my chaps were required to take.

These attributes allowed my General Gordon to pull off some nifty marches across the table resulting in some well timed charges but inevitably lead to my character taking a light flesh wound from some ill-directed Federal musketry. All the players had selected other such chits before play and added that little spicy piquant to our game during the day. A piquant that matched the Madras spicy peanuts that accompanied the early play.

The battle on Early's flank began with some initial exchanges of musketry between the opposing forward infantry groups with honours fairly even, but my artillery boys came up trumps early on with a bit of cool gunnery that knocked out one Union piece, disabled another and severely reduced their fire as my infantry advanced with great dash across the open ground.

On reflection I think our infantry had slightly less ground to cover than did our comrades in arms on the other fronts which enabled our men to close with the enemy before any of the other Confederate divisions.

That said the Union gunners managed to return the earlier compliment paid them by my gunners by rolling a ten and firing at full effect with their remaining pieces in their next fire phase, but thus putting them out of ammunition that allowed my infantry a little more breathing space amid the open ground between our respective lines.

It was then revealed that Steve M, my Union opponent for the day had the option as his special attribute to make the occasional re-roll of firing and combat die rolls. In the end he decided to stick with the damage inflicted on my ranks and hastily summoned an ammo wagon to replenish his stocks. He was less fortunate later in the day when cancelling a well hit shot with another ammo busting ten die roll, re-rolled a two!!

As I set off on my first patrol around the other battle fronts I could see that, like us, the Confederate forces were taking casualties in their early advances but closing on the Federal lines never the less.

With the Union guns in some disarray on our front, Gordon's men scrambled over the picket fence, adding their musketry to the artillery fire now brought to bear on the open order Union infantry closest to our intended advance. The gunners kept up their well aimed fire and its heat soon had the Union regiment falling back on its supports as out infantry drew ever nearer.

The first infantry clash was when the open order Union infantry held its ground for one move to long and was caught by my able commander's +1 manoeuvre ability raising the 7 rolled to 8 enabling a double quick rate and contact.

Not to be undone a second time the next attack had the opposite result, driving the Union line back to just in front of the Union held picket fence, as General Hoke moved his men up quick time in field columns before deploying into line close behind Gordon's men.


On the left flank of Early's attack Hay's brigade was caught up in some hot bayonet work as both sides struggled to gain the upper hand. A gap in the Union line allowed the Confederate cavalry to attack the gun battery supporting the Federal infantry and the gunners were clearly unsettled at being attacked with pistols and shotguns at close range.

With the two brigades of Hoke and Gordon up on the Union fence line, the struggle reached a higher intensity as Gordon's reserve regiment cleared the Union gun line and carried the position. Their left flank turned and the infantry occupying the wooden shack to their right succumbing to the attentions of the massed fire of the Confederate guns, the Union regiment in the centre fought like tigers managing to draw their struggle with the two shot up regiments from Gordon's brigade in the first combat and narrowly winning by one point the second fight to hold their position.

The writing was well and truly on the wall for Grant's brigade or rather what was left of it and deciding on discretion over valour made their escape back to the next fence line and the last before the Scott's Ford road.

The decision was taken to draw the Confederate attack closer together to enable better support to both wings and thus a rather unique event occurred that in all my years of wargaming and playing the odd ACW game I can't remember seeing, namely a successful charge in the saddle by cavalry.

The picture below caught the action just at the critical moment as Steve M can be seen measuring out his planned withdrawal back to his next stop line as the Confederate infantry can be seen taking the position on the fence line prior to the decision to bring Holk and Gordon's troops closer to the centre road via the cover of the wood to their front loosely held by a regiment of Union infantry and dismounted cavalry sniping from the edge of the tree line at Hay's advancing brigade.

Again the Confederate troops managed to manoeuvre with elan as the lead unit from Gordon's brigade charged into the back of the dismounted cavalry closely supported by the nearest fresh regiment from Hoke's brigade, whilst another regiment pinned the Union infantry to its front by advancing on it.

At the same time Early's divisional cavalry slammed into their dismounted enemy who were broken and swept from the position. In the subsequent breakthrough charge, they then slammed into the flank of the Union infantry behind sweeping them away also.

As if to rub salt in the wound, the Union troops in reserve attempted to fire on the victorious Confederate masses on the edge of the tree line but due to another well timed special attribute were persuaded not to when the Confederate commander revealed himself as the gentleman who had saved the Union brigade commander from a very embarrassing incident during their time at West Point.

The close proximity of Early's division to the Union escape route seemed to inspire even greater resistance from Union troops as Hay's brigade was subjected to an all out counter-attack by Neil's brigade. This assault forced the Confederates back from the fence line they had fought hard to occupy.

On both the other fronts progress was slow and difficult and although Sedgewick's Corps was battered and had given ground it was decided that they would be able to pull out over night and so honours were even. Just as it should be.

As always, the end of year game was great fun with lots of banter and played in a great spirit and a round of applause was given to Chas for pulling the whole thing together and herding the cats that make up our club membership. There were some significant absences from this year's line up and they were missed, so I hope this report makes fun reading.

Highlight of the day was surprisingly not the Confederate cavalry charge, but the discovery that Mr Steve does bake exceedingly good cakes as he turned up with a prize winning coffee sponge that went down very well with a mug of tea in the afternoon.

So that is it for another year at the Devon Wargames Group. We all wish everyone a very happy Xmas and lets pray, a more peaceful New Year and we will be back in January with a play-test game of Dr Phil Hendry's Ancient rule set "Augustus to Aurelian", "Chain of Command", Battle of Mirbat 19th July 1972 and "Black Powder" AWI.