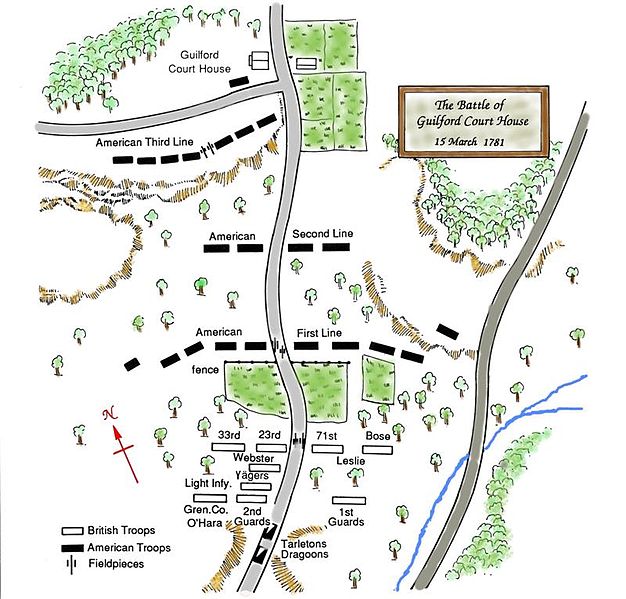 This month we rolled out the Computer Strategies rules "Iron Duke" to run an AWI scenario recreating the battle of Guilford Courthouse. I haven't played these rules for a few years now but had fond memories of a system that was quick to master and gave a fast fun game allowing the commanders to direct their troops without having to work the rules or run the admin of morale, fatigue, ammo expenditure etc. The system we were using is the updated version 6 and is the latest incarnation. The order of battle was obtained from the Computer Strategies Yahoo group and the table set up and objectives took its inspiration from the scenario in the Grenadier rules by Dave Brown.

We set up the troop deployments on a 6' x 4' table with the British facing the first line of American militia. We set the game to run limited ammunition supplies, as this was an all day battle and this was likely to take effect. Unknown to us was the fact that one of the British commanders, General Leslie was suffering from a re-occurring illness that gave him periodic attacks of fever. This and the ammunition would take effect during the game

The British began their assault on the first line taking fire from the American cannon and riflemen as they closed, but managing to drive off Washington's dragoons with a well delivered volley from the Guards, but losing the services from the British Legion dragoons as they got themselves ambushed by Colonel Lynch's Virginia Rifles. After delivering their two required volleys the two militia units fell back from the picket fence and their withdrawal turned into a rout. The British light infantry managed to shoot up the American gun crews and they in turn broke with the militia. However the volley fire from the militia caused casualties and disorder on the 23rd Fusiliers who fell back to dress the ranks.

Now as the battle fell back into the woods and approached the second American line the two Virginia Rifle units came into their own. The Guards, Grenadiers, Von Bose's Hessians and the 71st Highlanders were subjected to a merciless sniping as they strove to drive off their elusive foes by ill directed volleys and charges. The relentless sniping proved too much for the 71st and they broke into a rout. The 2nd Guards and the Grenadiers were also badly affected by the battle in the dense woods and they fell back to the picket fence to regroup and redress the ranks.

The British pressed on with the Hessians, First Guards and Light Infantry, and it was now that the British Light Bobs took control of the battle in the woods by driving off and breaking Lynch's riflemen and then breaking the resolve of  Lawson's Virgina Militia causing them to break soon after. The First Guards finally managed to drive off Campbell's Rifles only after the riflemen had run out of ammunition. It was left to the re arriving 2nd Guards and Grenadiers to deal with Stevens' Militia.

The second American line had been dealt with, but at what cost? Several British units were out of the fight, the 71st Highlanders, British Legion dragoons, Hessian Jagers, and the 23rd Fusiliers. In addition the British command was under pressure, with General Webster mortally wounded, and General Leslie incapacitated with the fever he had caught in this damnable Southern climate.
The British decided to regroup, resting several units to allow them to regain their composure, and reassigning the final assault units under one commander General O'Hara who would deal with the continentals third and final line.


The Americans also took the respite to pull back their only surviving unit from the fight in the woods Campbell's rifles, to support the final line
With both armies ready for the final clash the British stated to manoeuvre their forces to the edge of the tree line. The forces available to the British were the two Guards battalions, the Grenadiers, the Light Infantry, Von Bose's Hessians, the 33rd Foot and Capt McLeod's Royal Artillery section. A rather unsteady 23rd Fusilier battalion trailed along behind.
The British attack plan was to flank the America ridge by the courthouse with the 33rd Foot and Von Bose's Hessians. The Guns would start to shell the Americans from the road whilst the Guards, Grenadiers and Light Bobs would assault the front of the ridge.


The American commander was not prepared to rest solely on the defensive and launched a pre-emptive charge by the 4th Virgina Continentals on the 33rd Foot as they emerged from the tree line by the courthouse in column of march. The 33rd Foot were a solid veteran unit by this stage of the war and displayed that coolness of the tried veteran by forming line, turning to face and delivering a crashing point blank volley into the Virginians faces, who immediately turned tail and fled back to the hill.﻿

Meanwhile the Royal  and Continental Artillery had been peppering there opposite lines with the British guns having the best of it. The 33rd Foot followed up their initial success by proceeding up the slope and dealing with the 5th Virginia Continentals, with both sides swapping close range volleys, before the Americans had decided enough was enough. However the 33rd Foot were now worn, and it was down to the Guards and the Hessians to "seal the deal".﻿

The Guards pressed forward supported by the Grenadiers to exchange compliments with the remaining two Maryland battalions. The Marylanders blinked first and started to give ground but not without one final insult to the Crowns forces. In the last move of the game, turn 21, General Cornwallis himself was seen to fall from his horse killed in the last exchange of fire.

So who won the day? The British objective was to break all three American lines and for destroyed American units, including routers, to be double those lost by the Crown. They had clearly broken all three lines and had lost four units doing so. In return the Americans lost nine units.

So a British win, of sorts, but with the death of Cornwallis, certainly a Pyrrhic victory similar to the actual battle.

Great game, with plenty of highs and lows for both sides as units broke, or refused commands. With officers being killed or incapacitated, and riflemen taking it to the Gentlemens Sons in the Carolinan woods