Dark Age Delights at the DWG 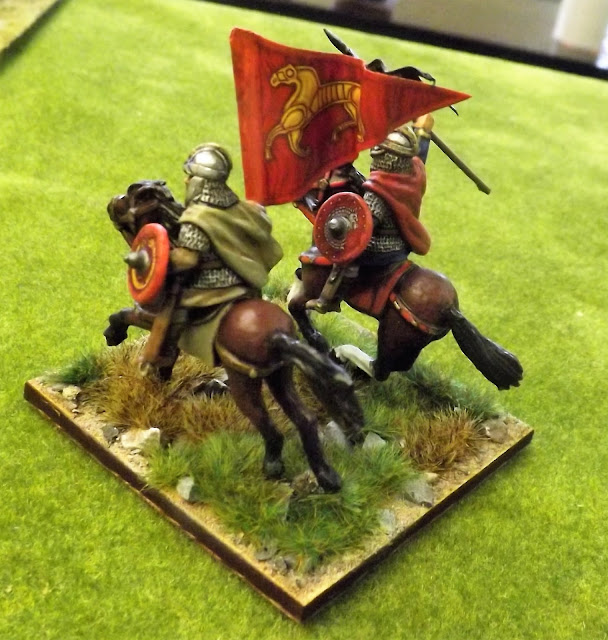 Regular followers of the club blog will know that with the size of club we have become in recent years we like to put on three or four historical period games at each month's meeting. 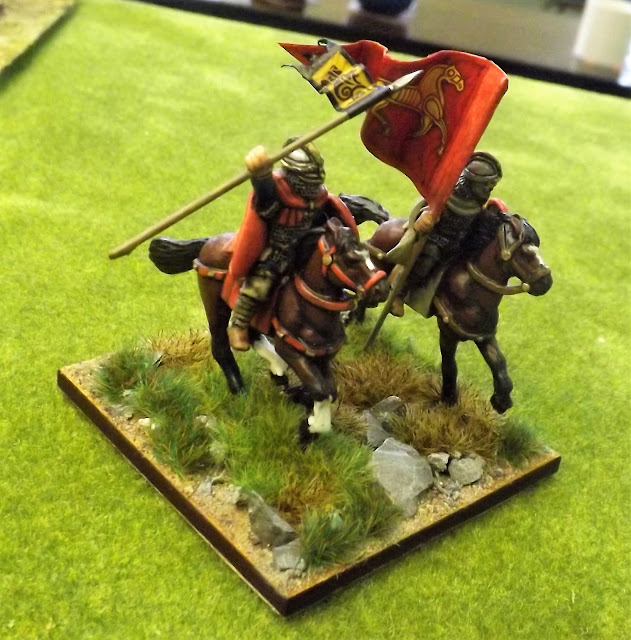 This month's meeting was a bit different as we traditionally have our end of year game, renamed this year in honour of Gus Murchie and so our normal sequence of posts covering our multiple games will not feature . 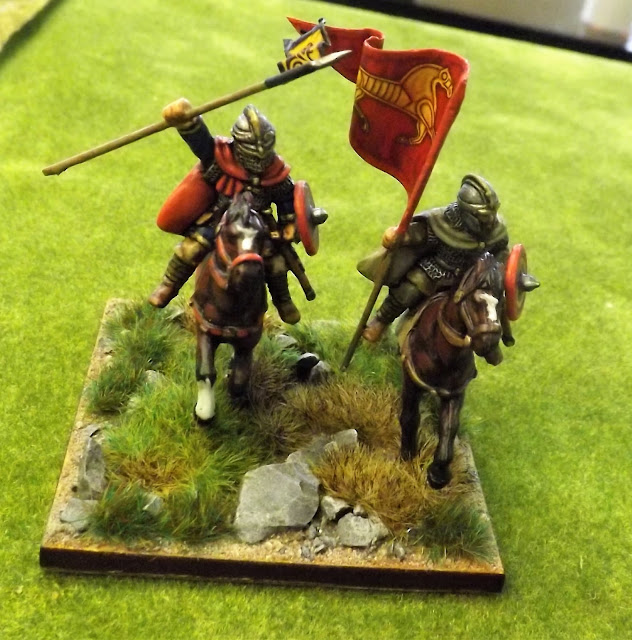 So to make up for what would have normally been another game post and to provide a little inspiration to keep painting over the Xmas break, I have put up some pictures of some of Nick's collection of 28mm Dark Ages figures that I photographed back in the summer of this year. 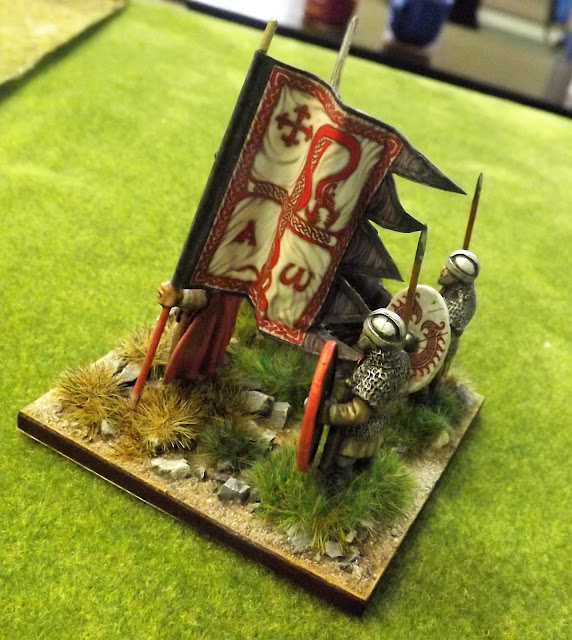 The club can boast of some lovely figure collections among the members and we have some very good painters and modellers among our number, Nick included. 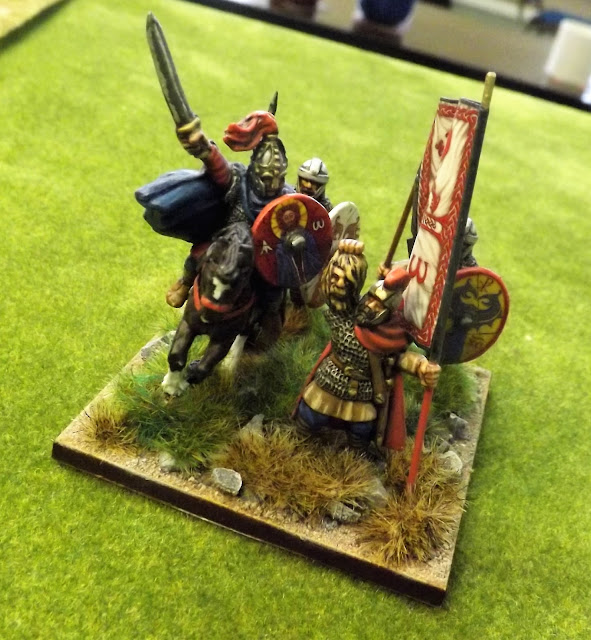 The really nice thing about joining a club like the DWG is that you can get to try out periods and rules you might not have played before, meet and make new friends who share a similar passion and get to share and learn from others when the time comes that you would like to build a collection of your own. 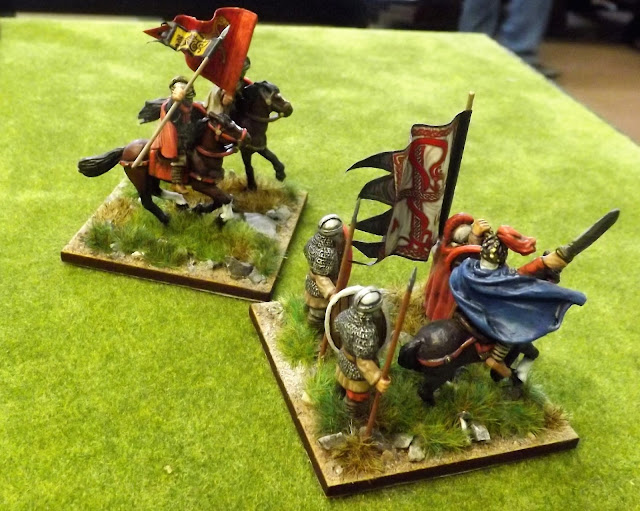 The other great aspect is that when you want to get your new collection of toys out on the table you have a ready made set of friends who are just as eager as you to start playing and having fun. 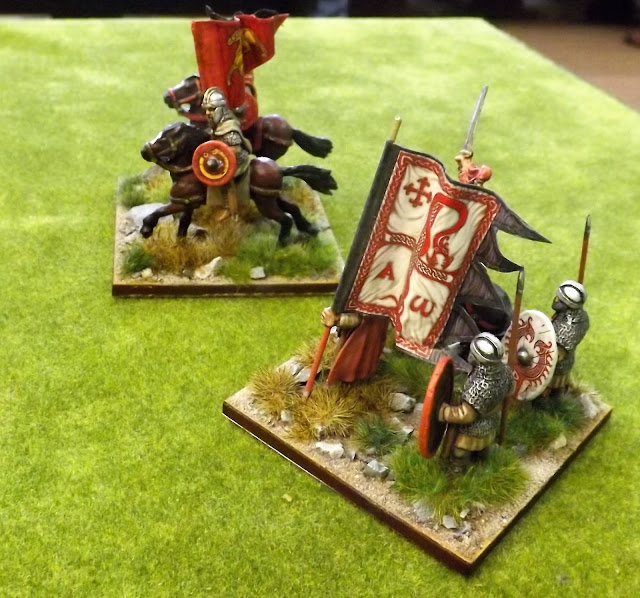 If you are an experienced gamer with established collections and rules that you would like to play on a regular basis or if you are new to the hobby but keen to get involved then you are welcome to check us out. 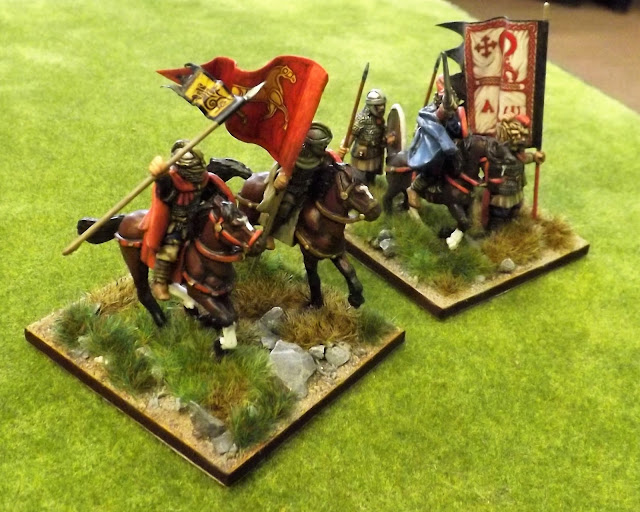 If you are looking to join a Wargames Club and think the Devon Wargames Group might be for you, why not come and join us on one of our club meetings on the second Saturday in the month and try it out for free to see if it is for you.

We look forward to welcoming you to our great hobby.

Traditionally at the Devon Wargames Group our December meeting has only one large game, instead of the three or four we would normally run, where all the club can come together to play in one game.

If you look back through our archive we have had some great club games covering the Dark Ages, Wars of the Roses, American Civil War and and the Glorious Revolution to name a few.

This year we decided to set our chosen game in the American War of Independence and loosely based on the Battle of Oriskany fought during the Saratoga Campaign of 1777.

The chosen rule set was our 'turn to' big game set of skirmish rules for black powder games, Musket & Tomahawks. 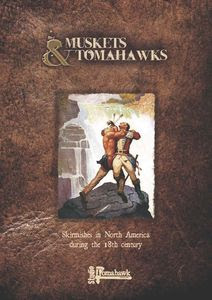 In addition our end of year game has now been re-titled, this year, the Gus Murchie Memorial Game in honour of a former member of the club who sadly passed away a few years ago and whose banter and passion for the hobby is a great loss to our club and is sadly missed by all of us who knew him. I know Gus would have thoroughly enjoyed getting stuck in with our big game yesterday.


Another tradition has been to place the organising of this kind of game, which requires the skill of a cat herder to get the figure lists drawn up and the terrain requirements, not to mention who might be appearing on the day to play, in the hands of an expert, but as we couldn't find one we relied on Chas to get things sorted out, and what a fine job he made of things.


On arrival in the morning the tables were rapidly arranged with cloths and terrain to replicate a section of road leading through the woods of up-state New York simulating the route our American supply column was following en route to relief the garrison at Fort Stanwix.


Nothing too complicated here with the American team simply trying to defend the road and get their supply wagons through with the forces of the Crown determined to prevent any such thing.


The mechanism of Muskets & Tomahawks lends itself perfectly to this type of multi-player game where we had about twenty players at the table each with a mixed force of the different types of units, regulars, irregulars, provincials etc, that meant that with the use of a single card deck, managed by our gamemeister Chas, the card revealed would enable all players with that troop type, either American or British, to activate the unit class simultaneously.

As units were activated according to the card draw the deck would be used up and then reshuffled signifying the start of a new turn.


With the method of play described, we happily rolled through the turns, blazing away at each other and in my sector of the table managing the American column rear-guard even exchanging sabre cuts as both sides cavalry got stuck in.


It can be great fun playing on one large table like this, never really quite knowing how the battle is progressing a few chairs down from your sector of the battlefield until someone starts putting musket rounds into your troops from a totally unexpected direction.


Speaking from an American perspective, those pesky Brits and their Indian allies made full use of their ambush position, softening up the column good and proper from the cover of the tree line before advancing out on to the road to chop things up and finish off the defenders.


At the rear of the column three continental units managed to string a firing line together only to see British light dragoons and Provincial light cavalry come stomping down the road backing up a unit of highlanders with Indians operating on their flank in the tree line.


Despite valiant resistance the American units started to get picked off one by one, leading to gaps appearing among the line defending the road.


The British cavalry closing on the rear of the American column looked likely to overwhelm the American line forming to protect it.


It's amazing how all the fun can create an appetite, but we like to have that covered at the DWG.


The British didn't have things all their own way as the American light cavalry made their mark with a dramatic charge that helped ease the pressure on the rear of the column.


Despite the odd success here and there along the route the British pressure just kept coming and one of the wagons was dragged off the road as property of his majesty the king.


With four o'clock showing and things getting 'dimpsey' outside (that's a Devon expression meaning fading light) well actually it was dark, the Americans reluctantly conceded the field of battle to the forces of the Crown with a few of us quickly marched off to spend Xmas aboard a hulk in New York harbour.

The DWG excelled itself with another great end of year game with lots of good natured banter and laughs together with plenty of drama on the table.

Many thanks to all those involved for making the day and particularly to Chas for organising and managing the game.

We hope everyone who has seen and commented on the games at the club this year has enjoyed this window on our activities and will continue to follow the fun next year and as always we extend a welcome to anyone in this part of the world who would like to get into the hobby by coming along and joining in.

We wish everyone a happy, peaceful Xmas and look forward to bringing you some new games in January 2018.
Posted by carojon at 14:05 2 comments:

WWI Air with Wings of Glory 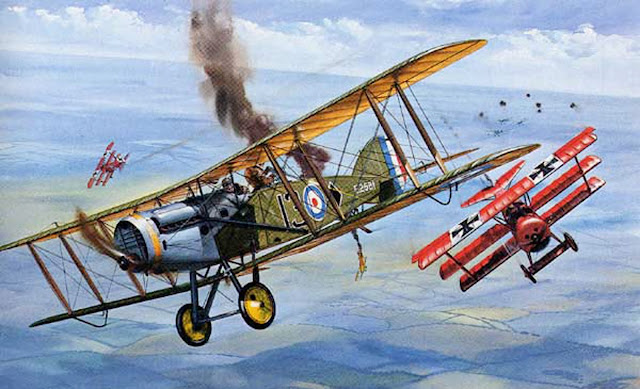 Our fourth game this month was hosted by Mike who as a regular member of the 'Drome' likes nothing better than "to climb into his kite and take it to heaven and back five times a day", to quote Lord Flashheart, and that's the family version of that quote!

Back in the day, WWI air was a regular feature of games played at the club and a large collection of 1/72nd, mainly Airfix, models were assembled using Blue Max as the game engine with our own hex mat of the Western Front. 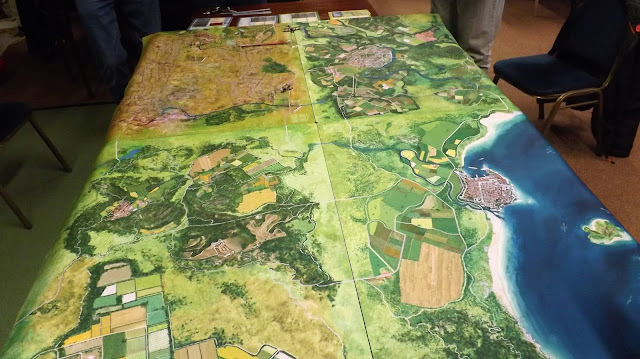 Of course things move on and today anyone wanting to get into this period of gloriously painted war-birds wheeling over the trenches of Flanders need look no further than Wings of Glory who produce the stunning models in Mike's collection seen in action at the club and there are as you can see beautifully created mats for the game. 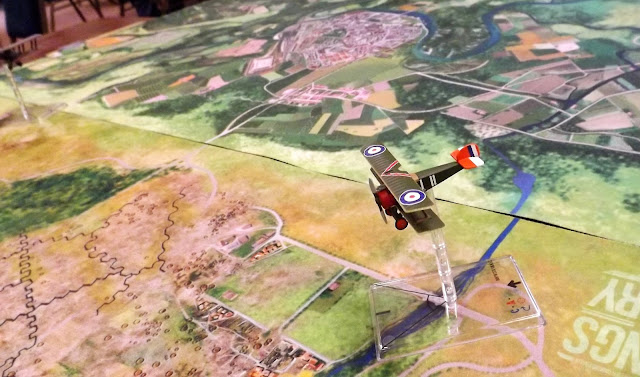 I love the passion that surrounds those into collecting the various squadron and jasta markings that characterised the aircraft of this period and Mike has a stunning collection with just a fraction of it here on show. 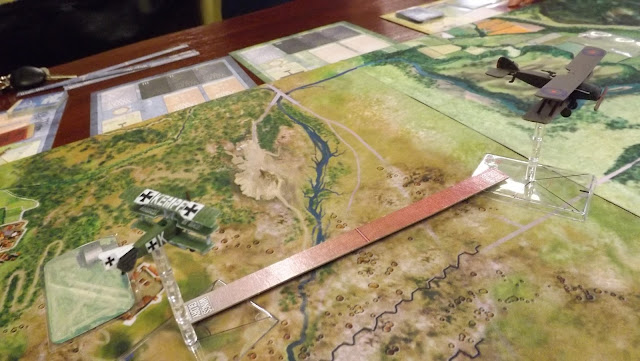 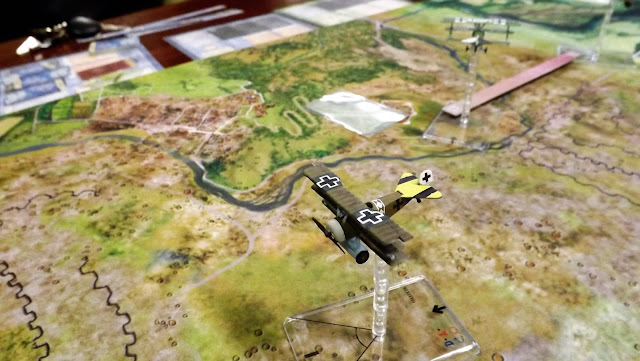 The rule system for the game is very slick and intuitive and makes for an easy play entertaining afternoon's gaming. 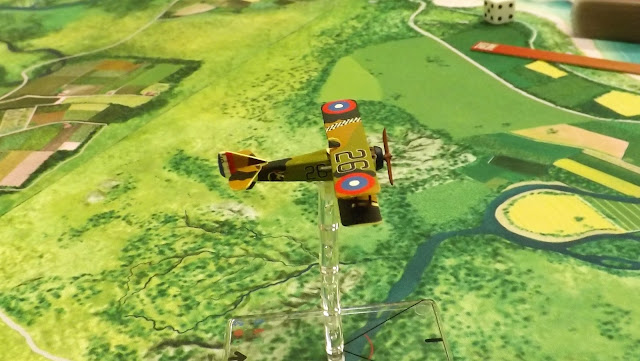 I was playing on the Dux Bellorum game but am lined up to have a play myself in the New Year and with a love of air-games in general might easily get a bit distracted with something like this. 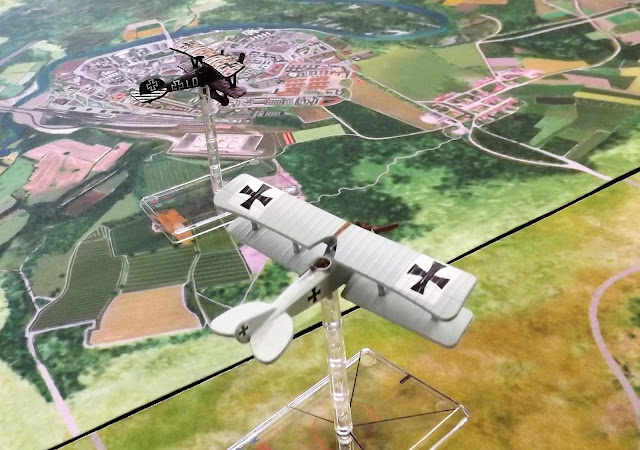