This month at our club meeting we had three games going covering WWII FOW version 3, an ACW game and our initial go at Napoleon at War, a new set of rules and a range of figures from the guys at Man at War.﻿

http://www.manatwar.es/
In addition to describing our game I thought I would include my impressions. I should add that I am not an expert player of Napoleon at War, only having played two games, but I have played a lot of Napoleonics in thirty nine years of wargaming.
I will also point out that I have based my figures to this rule set, a collection of mainly AB's and Fantassin figures, but the guys at Man at War are producing their own ranges all prepacked with the bases to build the required brigades, and there is soon to be the launch of their first campaign book covering Waterloo and the 100 days.
For our test game I ran the fictional battle of Los Alcazarez which is a "Rear Guard" mission. The mission essentially requires the defenders to hold their ground for 6 turns by controlling or disputing possession of two centrally placed objectives, I used a couple of waggon models, and gaining more victory points vs the attacker by exhausting enemy forces. The forces tend to be brigades of three to four infantry battalions, two or three cavalry regiments of artillery batteries and they can become "exhausted by losing 50% of their forces and failing a commanders "valeur "test, usually 4,5 or 6 to pass for an average commander.

The French had three brigades of four battalions of infantry, two batteries of foot guns, 6 & 8pdrs and a light cavalry brigade. The British had two brigades of line infantry each four battalions one being highlanders, a Guards brigade of two battalions, a foot battery of 9pdrs and a light cavalry brigade. We played around with the characteristics to bring both forces up to about 2000 points.
During the game both sides test to bring on reinforcements to bolster their lines, and the picture below gives an impression of the initial set up (apologies for the quality of the pictures, done on the "Blackberry" because the camera batteries were out). The French are attacking from the left with two infantry brigades of eight battalions beyond the road supported by a battery of 8pdrs on the road. Whilst closer to camera we have another brigade of four battalions supported by a battery of 6pdrs. The French had a brigade of Chasseur a cheval in reserve.

The British defenders deployed an infantry brigade of four battalions beyond the road to dispute a parked waggon just visible behind their infantry, and placed the Guards brigade of two battalions in the farm and gardens just visible in the foreground. They placed the second waggon right behind the farmhouse to force the French to fight for possession of the complex to control the objective.

They placed a 9pdr foot battery to their rear on high ground to provide support and had an infantry brigade of four battalions (one highland) and a light dragoon brigade in reserve
I was interested in playing this scenario as I have an idea to recreate the famous battle of the Light Division retiring across the plains of Fuentes de Onoro, and some of the mechanics in this mission would seem to work quite well.
With both sides set up the French closed up on the British line, with their mighty D'Erlon like phalanx edging forward but not charging. The French commander opting to use his numbers to engage in a firefight by having his lead units in line and using his skirmishers to help absorb the hits from the initial British volleys (a French characteristic built into the special rules for the individual national characteristics). The British seemed happy to let the enemy use the time up shooting whilst they held their ground awaiting support. This might have worked if the British commander was able to throw half decent saving rolls, but because not, the British units were getting the worst of things by turn three.

Meanwhile on the other flank the French were trying to work out how to prize the Guards out of their stronghold. The arrival of the French cavalry in turn 2 allowed them to consider removing the battery of British artillery behind the main lines to enable their infantry to envelope the position. In addition the French 6pdr battery with its single howitzer started to shell the buildings.

The French commander in the spirit of testing the rules launched his assault on the Guards in the farm gardens. We described this terrain as outskirts (rough, restricting movement) with protection from shooting. The initial assault was on the wall defended by the Guards. This was easily seen off by the cold blooded volleys of the elite infantry. However whilst dealing with this attack they quickly gad to re-face the line to deal with a French unit that got into the gardens from another side.

This time the combat was slightly less one sided as we allowed for both units being in the terrain, however after a short combat the other French unit was ejected from the farm. 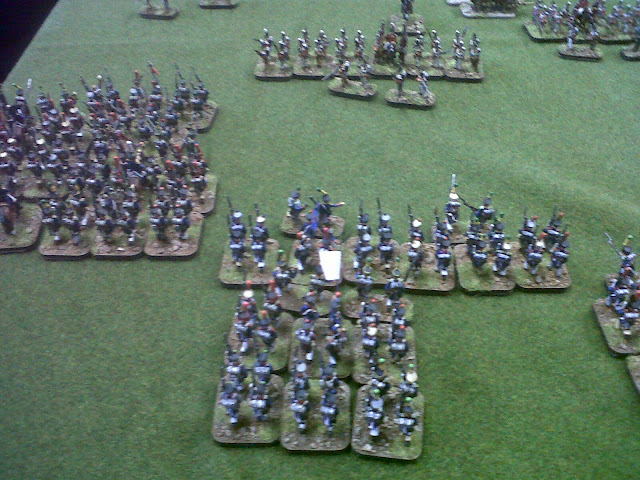 With the British line brigade getting mauled in the open by 8pdr artillery and French musket volleys, the French piled on the misery in turn four, and with the British continuing to have a bad day with the dice gods, we see a very satisfied French commander surveying the field of battle following the departure of the exhausted British troops who failed their Force morale test.

With the collapse of the British right flank and a battle royal going on for possession of the farm, the British reserves started to arrive in turns four and five. The British light dragoons immediately made their presence felt by charging in support of the Guards and mixing it with the French cavalry who had been attempting to get at the British gun line.
As with most light cavalry hacks the fighting was furious but not entirely conclusive with one regiment of each opposing brigade winning their first round of combat.

The arrival of the British reserves was not able to repair the damage done in turn four, and although the British Guards held their objective, the collapse of the Line brigade was enough to give victory to the French by close of play.

I suppose I am what is commonly described as a "Grognard", in that I am of "middling years" and have played Napoleonics since 1973 when I cut my teeth on WRG, Bruce Quarrie's and Peter Gilder's rules. My impressions of Napoleon at War is they are a set of rules that give a fast action, fun game that can be played to a conclusion in an afternoon at club or in an evening at home. The rules suffer slightly from being as I understand things, a translation from Spanish into English. The layout of the sections requires a bit of application, but I really like the subtle qualities of the rules with their national characteristics, I like the fact that although this is an I go, you go system the non phasing player still has things to do, like return fire on units that have fired at them. I also like the look of the game with units in two lines of figures and batteries of three or four guns.

The guys that played our game all said they would be happy to play the rules again, and I think we still have plenty to master with this game in applying the subtleties, and we will be playing more Napoleon at War.

Thanks to Ian, Nathan Steve H and Will for a fun afternoon