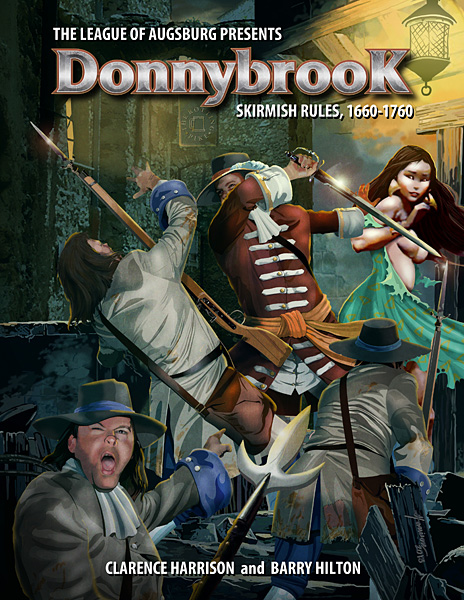 I had dabbled with this set of skirmish rules back in December last year with a scenario set up in Deepest Darkest Congo during our Xmas gathering at Chez Carter.
Deepest Darkest Africa with Donnybrook - JJ's Wargames

In that game Chas had made some adaptions, as the rules encourage you to do, to cater for a large number of players. This series of games, as we managed to play three scenarios during the day, was a smaller set up and thus allowed as to play the rules in their more purest form, ie as written using reload cards and special events, plus all the main types of characters.

During the day we played three fairly standard skirmish type game scenarios starting with an Escort mission, with a British escort accompanying a party of important ladies, an ammunition and pay wagon, attacked by a French raiding party with a potential British relief force on the way.

We then had a go at a British Rear Guard mission aiming to hold the French forces from leaving the table via the British base line for a fixed number of turns and then a straight up Meeting Engagement off the march with two equal forces looking to break the other sides army morale first.

The table you can see was used for the three missions with the different forces changing base edge for each of the missions that generated three very different fights, all of which I ended up playing various factions losing - Jack, I still say you are a bandit!! 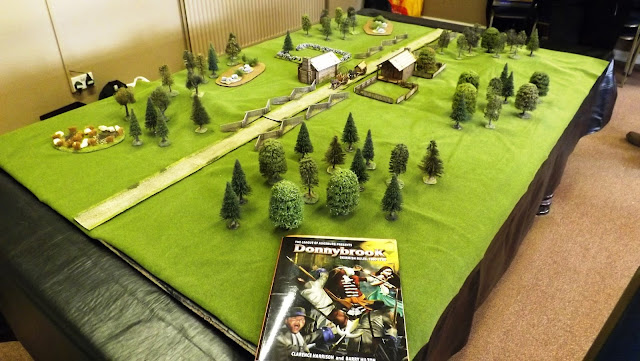 As we changed things around through the day I grabbed some pictures of the action, principally from the Escort and Rear Guard missions, for your amusement; and with a seemingly endless supply of skirmish level rule sets hitting the market and with myself just having ordered Sharp Practice 2 this week, thought I would share my impressions of how these rules play.

The Donnybrook rules use a card driven system with cards in the deck representing the various single figure characters (Officers, sergeants, drummers, heroes - these characters have special effects options to add a little spice to the game); in addition there are the unit cards and event cards including, special events and reload fired weapons.

All the game activities are driven by the draw of these cards and the deck is reshuffled on the drawing of the Turn end card. All very straight forward.

Units and characters test for their ability to successfully perform actions once activated by the use of various numbered dice (D6, D8, D10, D12) requiring a 6+ to pass and obviously with the better ability reflected in the higher dice used.

There is a point system in the rules to work out the number of units you can field and their quality determined by faction (army, outlaws, civilian mob etc) and table size (4' x 4', 6' x 4') which simply determines whether you get to field a 4, 6 or 8 unit force, with units ranging from 4 elite, 8 drilled or 12 recruit infantry figures. The cavalry units, which we were not using, range from 3 elite, 6 drilled and 9 recruit troopers.

Our forces generally had one elite, two or three drilled and a couple of recruits or variations on that theme, to include Indian and Irregular forces.

In addition we fielded characters such as drummers who for example would give +d3 inches on movement or sergeants who could order a unit to reload instead of waiting for the reload card and others.

Donnybrook are a well worked through set of rules and we found they give a fast and furious entertaining game without overtaxing the grey matter.

That said, the group of players at yesterday's game are all 'grognards' of the black powder, horse and musket era and inevitably we were wanting to have range bands and different reload rates for rifles over muskets, which the rules don't specify. However we were soon testing our own variations to cater for our own peculiar demands on the rules and I think here lies the strength in them, in that the basic structure seems very accommodating to individual tastes.

I know that might not be to everyone's taste, especially to those that have grown up with rules that 'chapter and verse' every possible situation and challenge their desire to find a way of breaking them. I am glad to say we don't have players like that in the DWG and thus we are able to model the games we want to play bringing to bear the vast amount of knowledge and gaming experience we have in the club. These rules are perfect for that approach.

Throughout the day we found ourselves comparing the play with "Muskets and Tomahawks" another skirmish set aimed specifically at the period we were playing. Of the two sets, I think I slightly prefer Donnybrook, but would happily play either.

As I said in the preamble, I have just ordered up the Sharp Practice bundle having been following the thread of posts put out by the Lardies over recent weeks and I look forward to play testing them in time, so it will be interesting to compare.

As a keen horse and musket player I am looking for a 'turn to' set of skirmish rules that allow for a good modelling of those lower level actions that characterised all of the campaigns of the era and also give a fun game easily picked up and played.

Donnybrook definitely falls into the list of options and if you haven't played them, then keep them on the list of possible options.

Thanks to Steve M, Jack and Vince for a very entertaining afternoon in the wilds of French Canada and three good games of Donnybrook, probably the most scenarios I have played with one rule set in an afternoon at club.
Posted by carojon at 10:36