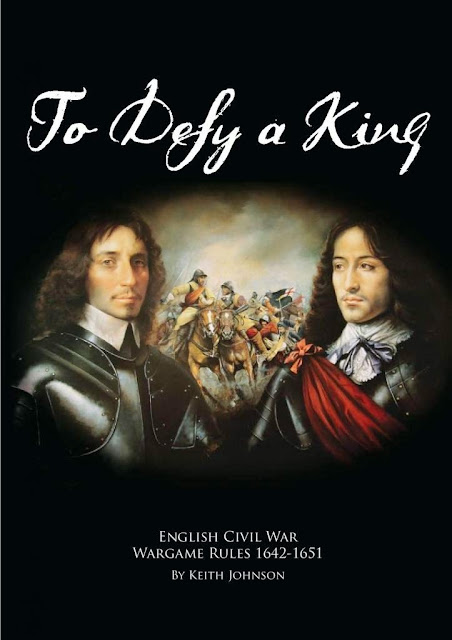 Previously on DWG.
(or was it on JJ’s blog, I don’t recall which)

and finally I was now ready to try them out but given that I hadn't actually read the rules I thought it best that this trial took place well away from public gaze and derision. We are big on derision.

So I borrowed both Mr. Land and his wargames room and then co-opted Nick into being my test Coypu’s (neither of them could now qualify as Guinea pigs) for an epic game of 15mm New Model Army v Scots.

First up, pick your forces:

Obviously you can just plonk down whatever you have but there is an option that comes with the rules and that is various small cards marked as Infantry, Cavalry, Artillery and Dragoons for both sides. On these cards are written various strengths such as:
6 stands consisting of, 4 Musket and 2 Pike or 5 Stands of Trotters.
The cards are numbered 1 to 11 and have different strengths, mixes or types on each one and there are different amounts of each card.

It is suggested that you choose ten cards per side for a typical game (again up to you) and there are Army Lists in the Rule Set organised by year and theatre.

As I said there are varied quantities of each card and if I take the above 1642 Parliamentary force as an example then you would be randomly picking from a total of 14 infantry cards.

The whole point of this is that early on you are more likely to get far more pistol armed cavalry as opposed to gallopers or bigger or smaller units with differing ratios of pikes to muskets.

Next you randomly pick out your quality ratings and allocate them face down to your units (again quantities of each vary with army or year). In our game the New Model Army (NMA) selected from 4 Raw, 7 Trained, 7 Veteran. (Scots were 7:7:2). Everyone finally gets an extra two free upgrades at the end.

Allocate Generals to your brigades (recommended is two regiments per) and off you go.

As this was trial of the rules we contrived to try out as much as possible whilst also enjoying a game that could later be flaunted in the face of the loser. Please disregard most of the markers shown in the pictures as we basically used whatever was at hand. We found that we needed to show, Quality levels, order status and Disruption level to assist in playing. 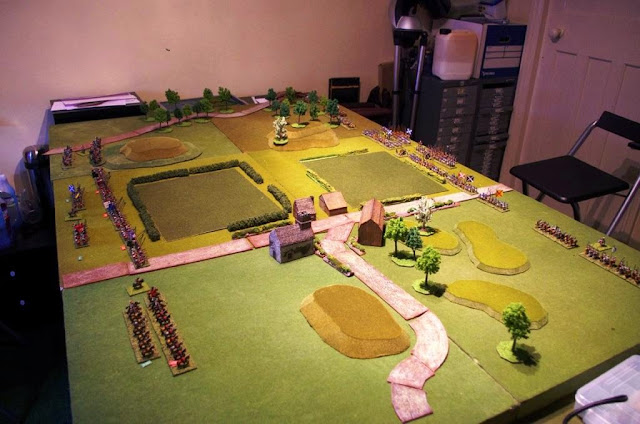 We started six inches on which seemed sensible at first but was actually a bit of a problem because field artillery cannot move after placement so we need to have a think about this for future. Turns are alternative and are decided by taking an initiative test at the start of each turn so you could move last in one turn and then first in the next. Movement is by brigades, winner’s choice on which player moves the first one and then the opponents move’s one of theirs and so on until all have moved.

Possible orders are: Defend ,Hold, Advance, Attack, Retire.
All brigades must have an order which can only be changed by their general passing a dice roll. 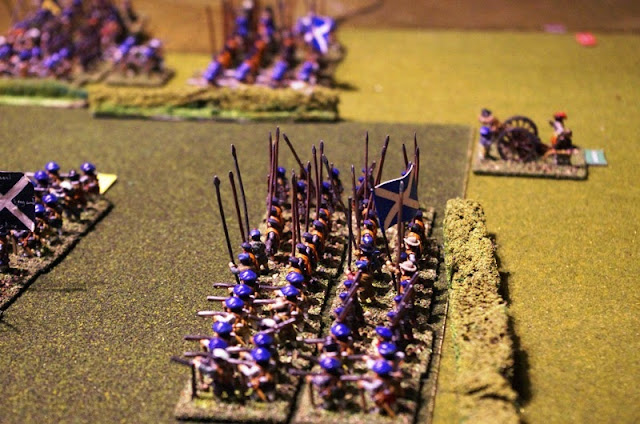 One occurrence we had in the game which confused us was;
Two units were side by side defending a hedge on "Defend" orders.
One unit is charged and engages in melee.
What does the other unit do next turn?

If defending it cannot join in so you need to change the brigade orders to attack therefore the original unit loses it’s defend bonus?

The answer is probably in the rules somewhere. 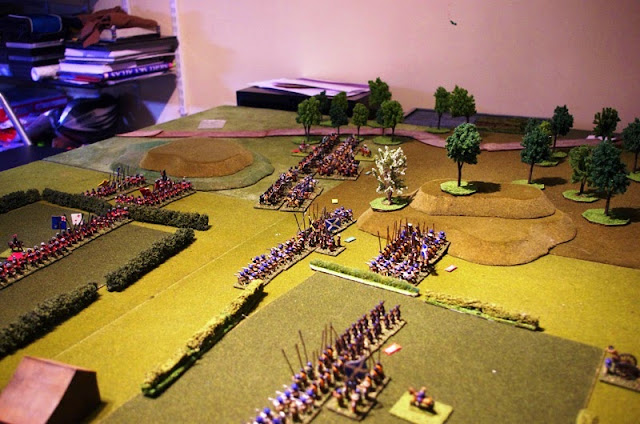 The orders force you to do certain things within its scope so you need to choose correctly, e.g. "Advance" means all the brigade must advance until it’s in firing range or alternatively to a set obstacle. You defend obstacles, you hold ground. 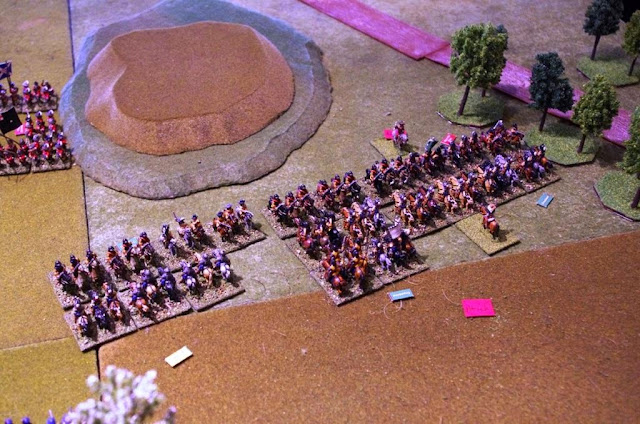 As usual in this era the cavalry got stuck in first. On the NMA right they had their best troops, consisting of gallopers, both were veteran and one was classed as "Ironsides" (all lists have some quirks ).

Let me run through melee combat:
Everyone needs 8+ on two dice to hit:

NMA: Veteran +1
Charging +1
Gallopers (first round) +1,
Cav v Cav, no change
So one pair of dice per base (5 bases = 10 dice) needing 5 or more
You need six hits to kill a base otherwise both sides dice roll against the number of actual hits (e.g. three hits then 1-3 kills)
Losers test against their discipline to avoid being pushed back the hits difference in inches.
Discipline and Morale are very similar but are not quite the same, sometimes you will need to roll against both.
Each unit can get pushed back only so many total pre-set inches before it then breaks (depending on its type and class).
If cavalry melees have two consecutive draws, then they both pull back. 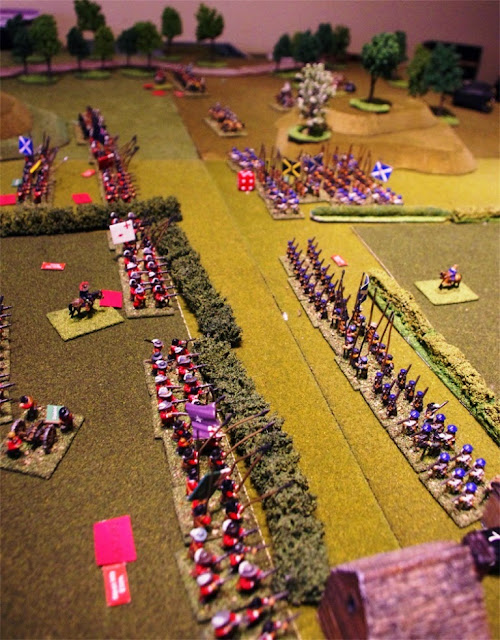 The NMA crushed the Scots Lancers and Trotters facing them, mainly through me not following the above correctly, pursued for a short while until they got pulled back under control. This would of course have been more difficult if the game was set earlier as the NMA cavalry had by now gained the Disciplined advantage. (Another quirk).

On the other flank the cavalry melee was a bit more even as neither had any of the better fighting Gallopers and so swung back and forth for a while until unlucky Scots saving throws lost them the combat.

In the centre there was surprisingly time for the Infantry to get to grips, The Scots had pulled some quite big units out of the hat (10 bases strong) and very co-operatively attacked the NMA infantry defending the hedges so that we could test firing and infantry melee.

Firing is very similar to melee:

Convert hits to kills as above and then we threw to see which stand had been hit, I am sure I read that in the rules somewhere but not sure if it is correct, if not then it should be.

Melee is the same as the cavalry but you need to see if a Pike stand is facing off against muskets. If so there is a +1/-1 on top 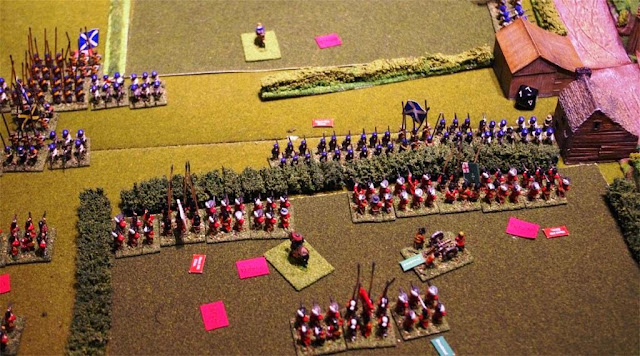 6, 7 or 8 required on two dice depending on class, add in support for rear and flanks, disorder, generals and each stand lost etc, Depending on how much you fail by will determine your retreat distance or rout.

Conclusion:
Overall it worked Ok and quite quickly considering the forces on table and our total incompetence. I would guess on average we could play a game of this size in anything from two to four hours.
I had already pre-bought nine sets of different coloured pairs of dice which is a must.
If playing with the cards then you do need to make sure you can cover all the possible variations, get more generals as you do really need to operate in two units per brigade due to the orders.

For anyone who wants to know how you recover from disorder then it is in the recover section of the book, do not expect it to be in the disorder section. There is at least one error between the QRF and the main rules, check before hand. 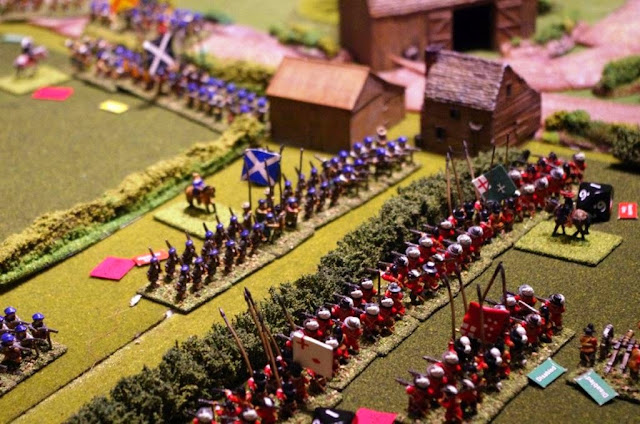 Finally, I definitely need more flags; having to be creative on forming the infantry due to my lack of figures I thought that the units which ended up with multiple flags looked far better than the ones with only one.