This month we played the second game in Gary Martin's linked campaign on the Epsom offensive. This campaign is available on the Battlefront website.


The first game in this campaign was played in March and resulted in the Scots gaining a narrow win and penetrating the 12 SS defences. This result affected the set up for our next game, the attack by 11th Armoured Division on Hill 112. Due to the rapid advance of the initial attack by the 15th Scottish troops the SS units defending atop the hill were caught deployed but not dug in.


The forces involved were


The map shows the terrain and initial set ups. Given the openness of the terrain, we set the SS troops as "stealthy" to reflect their excellent abilities at camouflage. This required them to be spotted even when in open terrain. Two objective were placed by each player, with the German objective placed just behind the wood on the left flank of the German set up zone and the British objective just to the left of the wood.


Once the Germans were set up on blinds the British armour deployed. Given the position of both objectives the British units would look to assault the German left flank. The cover of the hedge line on the British left flank was used to set up the Squadron HQ and both Firefly's to over watch the attack by the six remaining Sherman's. The Pak40s were a considerable threat as the British armour prepared to roll out across the fields and they got the first shot in, lightly damaging two Sherman's of the assault group and badly damaging the 21c Sherman in the command group. 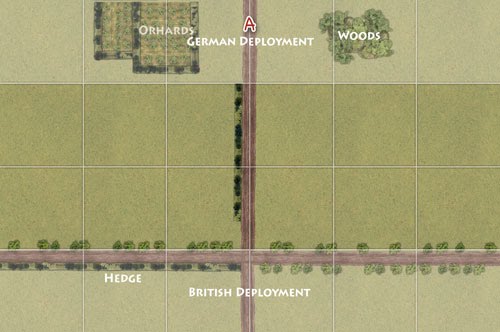 The picture below shows the initial attack going in. The two blinds next to the objective hex proved to be dummies. The real threat came from the wood on the right containing Panzergrenadiers and a PaK40. 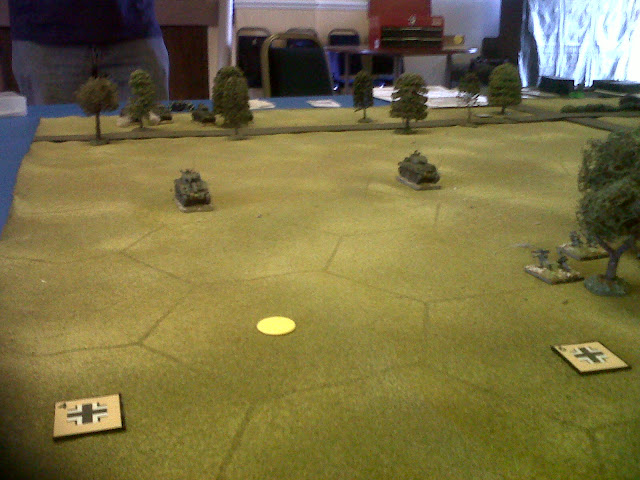 The only chance for the British armour was to get onto the objective quickly before the German armour showed up. The Germans guns had fired first, so now the British tanks concentrated their fire towards one gun in particular that protected the German left. It was a difficult shot which even after a successful hit gave the gun team a save throw of anything but a ONE on a d6. The German commander then managed to conjure up a ONE. However the gun team counted as a foot group and was intermingled with other Panzergrenadier foot groups, so a "My Choice" dice was required to see who, German or British commander, would determine that choice. The result went to the Brits. The picture below shows the knocked out gun with the German objective marker tucked in bend the wood. 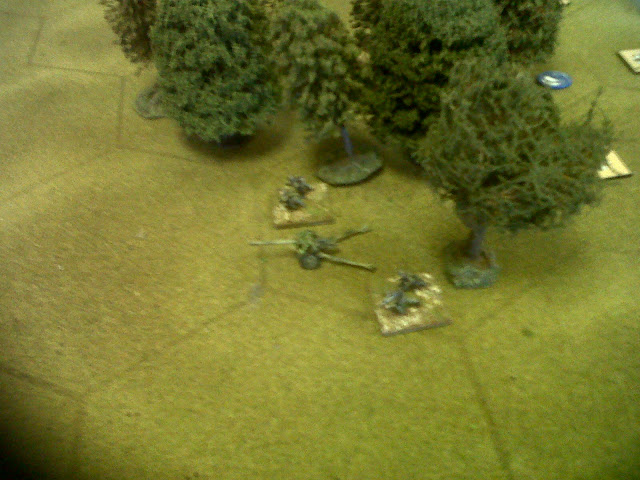 Below is the other side of the wood with other units that were unable to immediately stop the British attack. 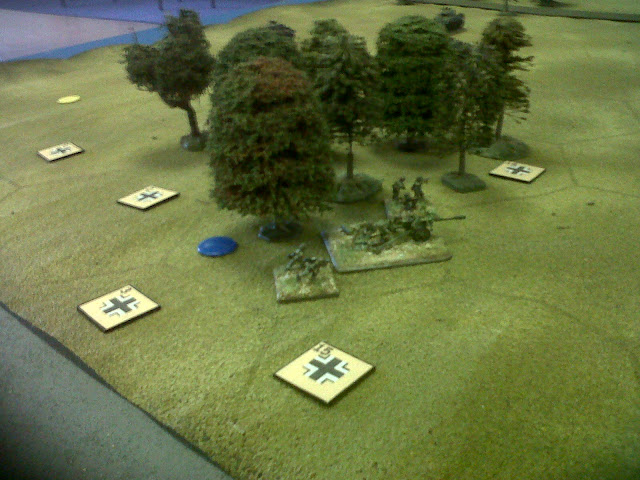 The only gun that could possibly stop the British tanks getting onto the objective in turn 2 was the third PaK on the corner of the orchard which could get a flank shot in on the next turn. The British Command tank took care of this threat by placing a well aimed smoke round adjacent to the gun thus masking off the British attack. 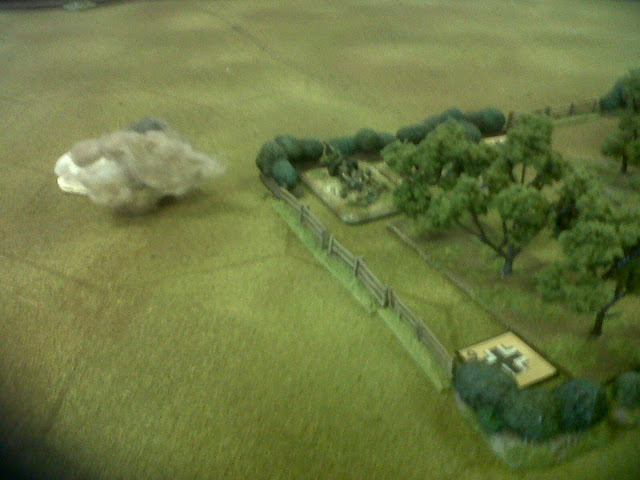 At the start of turn 2 the British armour were set up in the fields opposite the German left flank.


Would they be able to get onto the objective, and once there hold until the start of turn 3 to seal the win? 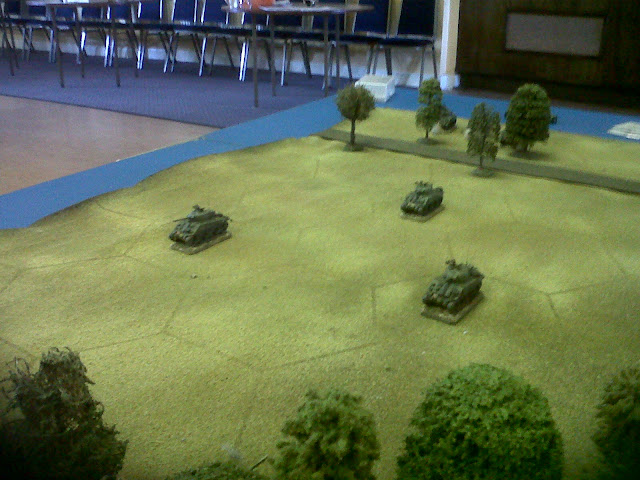 Both sides were busy rolling for reserves and taking mission resolve checks between turns, with both sides forced to wait another turn for reserve arrivals. 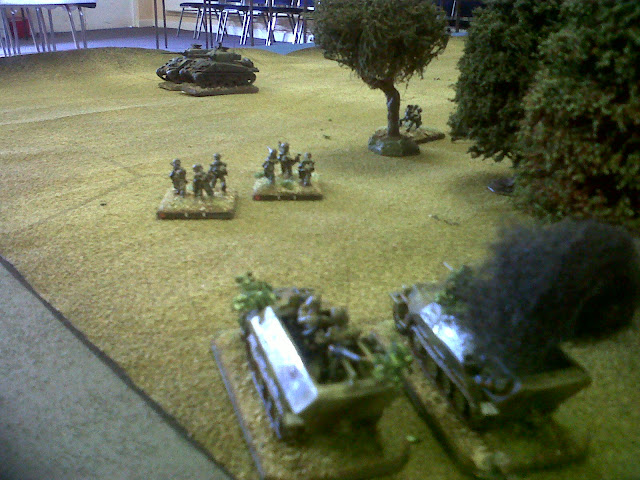 The British tanks moved onto the objective, forcing the German commander to consider counterattacking with his infantry in the open to clear the British tanks. However the Sherman's got the drop this time and badly damaged the Platoon Commanders halftrack that had tried a couple of potshots with its 3.7cm gun. 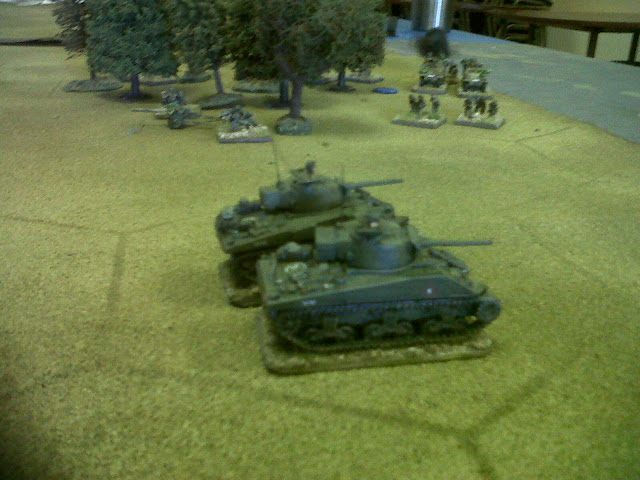 The start of turn 3 found the British tanks still firmly ensconced on the objective and able to claim a win, all be it a narrow one following the German fire placed on other British units on the table. This caused considerable damage and further failed mission resolve checks.

We decided to play the next three turns to see how things might have turned out, and look what turned up on turn 3, "gulp" 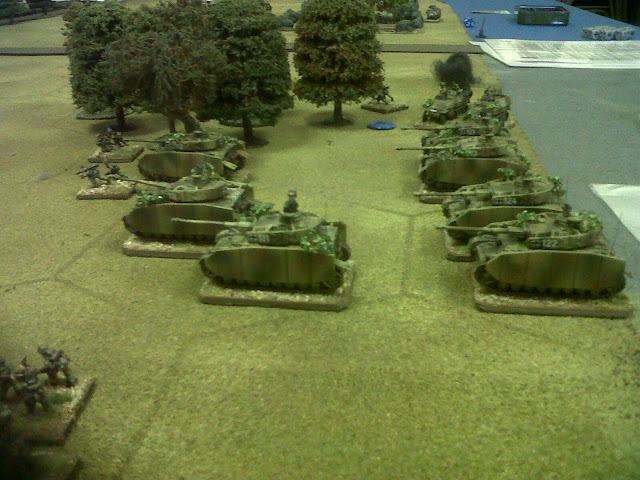 The German reserve die rolls proved more successful than the British with two Panzer IV platoons appearing for only one Sherman troop. The result being a lot of burning Sherman's at the end of turn 6, with a small conciliation of the PaK40 platoon failing its third and final mission resolve check and leaving the field. 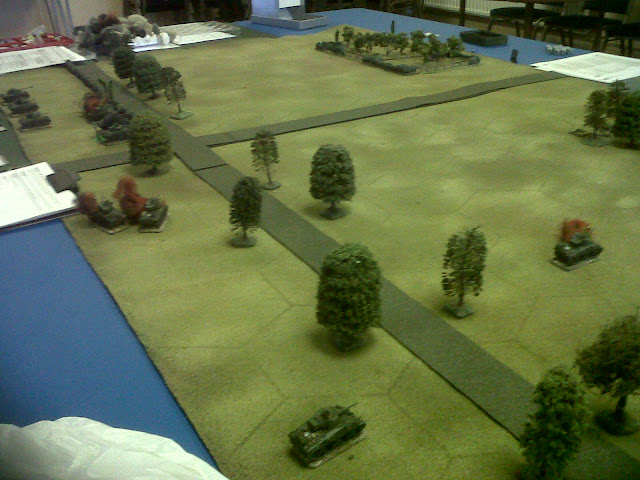 So the game ended in a British win, but only just. Wellington would have summed it up as a "close run thing". The score for the campaign is 8 vs 6 to the British after two games, so all to play for in the final game, the German counterattack by 9th and 10th SS Panzer Divisions.


Apologies for the quality of the pictures, I left the camera at home so we used Nathan's phone to capture the key events.


Thanks to Nathan for fun game