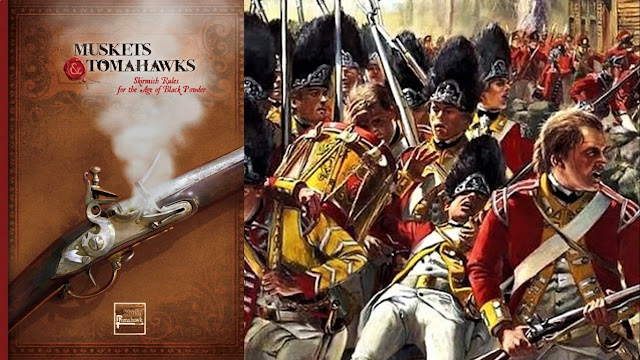 This weekend I got to play Muskets & Tomahawks (M&T) version two which was launched about June 2020 during the height of the pandemic which seemed to leave a lot of players with a new set of rules but unable to play them with anyone!
That said I like many were familiar with M&T Original which like all rules contained some interesting quirks, but gave a fun game with a strong French Indian War theme and have been played here a few times at the club so was not surprised to see the interest in the new incarnation.
I myself am in the process of building an AWI Mohawk collection of figures as illustrated on my own blog  JJ's Wargames and with the collection growing to completion have been thinking very much about an appropriate set of rules to model them around, with the three top offerings being Sharp Practice II, Rebels & Patriots and now M&T 2 in consideration, which having not played using the new version, left me really eager to take up Mike C's offer to run an AWI game using them.
Mike had prepared a table with the Rebel Americans holding a rather formidable looking entrenched line of gun redoubts and log protected emplacements behind a stream facing broken wooded terrain through which the King's redcoats, loyalists and Indians would make their assault. 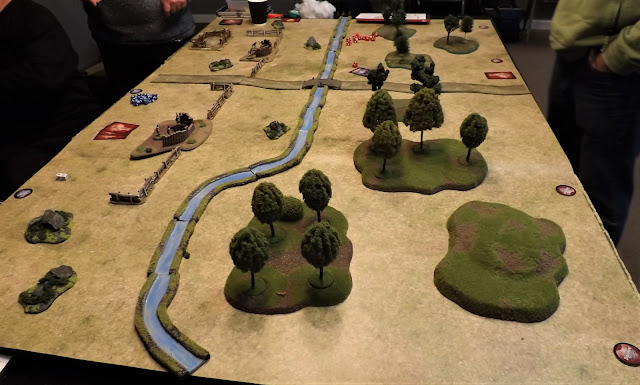 Si and myself would be leading the Crown forces whilst John and Mike R took the Rebels and we all started by getting a summary of the similarities and changes between the new look and old look M&T which primarily focussed on the card play which now sees the respective players holding three, occasionally four cards in their hand rather than the previous method of simply drawing a card from a common deck.
This means that opposing sides can be holding cards that would enable the opposition to activate on, giving them control over when those cards will be played, as each side takes turns to lay a card on the table to activate the given troop type, regulars, irregulars, artillery, Indians etc.
If forced to play an opposition card, which allows them to activate their troops, the playing side gets a command point to be added to a total than cannot exceed four points, which can be spent in later turns to replace laying a card and be used for additional activations and other useful command activities that enhance the combat potential of your own troops.
This makes for a very interesting game with lots of decision points for the players about when to lay a card and how to spend command points and the best time to do either. 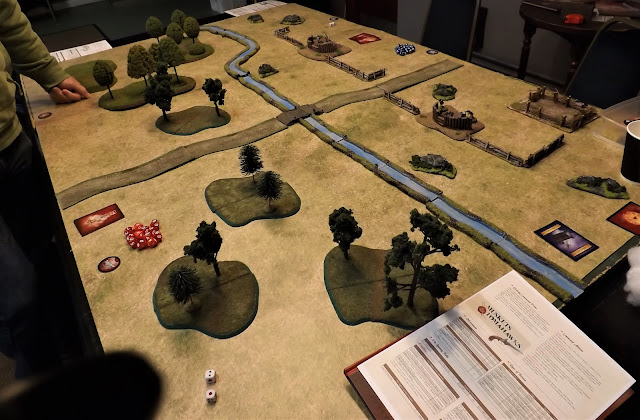 The other big change is the use of d10 instead of d6 for combat and morale check resolution with '0' representing zero not ten and the guidance that 0 is usually a fail and a straight nine a success with, for example, the range and tactical factors in a shooting calculation adding up to an 'impossible shot' being resolved by rolling a nine to hit and nine to convert to a kill, almost impossible, but we did get such a shot from a group of Rebel riflemen in our game.
Other than those very important differences M&T seemed to me to be very familiar as I started our game by deploying my Indians, Light Infantry and Queens Rangers off of the Deployment markers to make the trek through the trees towards the enemy lines. 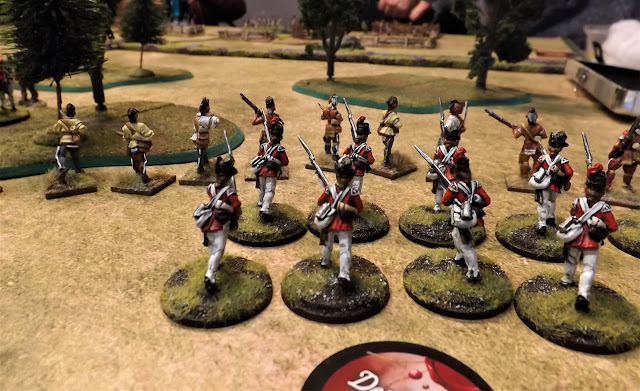 The Crown plan being to avoid the centre ground which was easily covered by interlocking fire from the Rebels two light guns, whilst pinning the Rebel left with fire from the light troops and the potential threat from the bayonet armed British light infantry which might help to draw in Continental troops in support.
As this threat was developed, Si would lead the Crown strike force against the other flank composed of British regulars, elite Grenadiers and Provincial Loyalists in support. 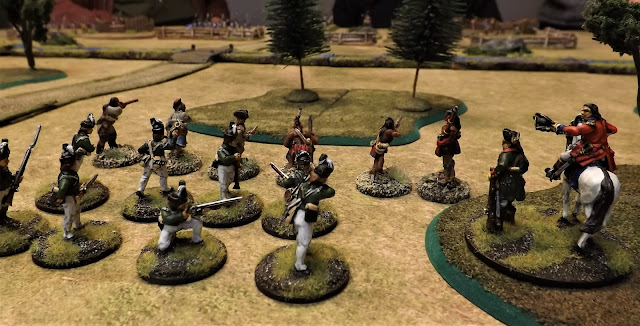 John and Mike had arranged their Rebel troops in a broadly symmetrical arrangement with an equal mix of regulars, militia, light troops and riflemen supporting the guns in their respective half of the line, prepared to thin the ranks of Crown troops as they struggled forward to engage their line. 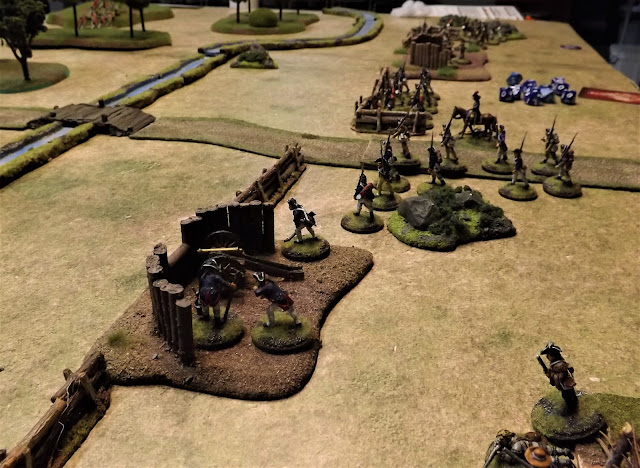 The first few moves were very revealing about the new card play set up as we started to identify the nuances of when to play opposition cards and command points, discovering how useful it was to spend our four points to retrieve the 'forward boys' activation card from the used cards deck before the final clock card ended the turn and caused the used cards to be reshuffled back into the draw deck. 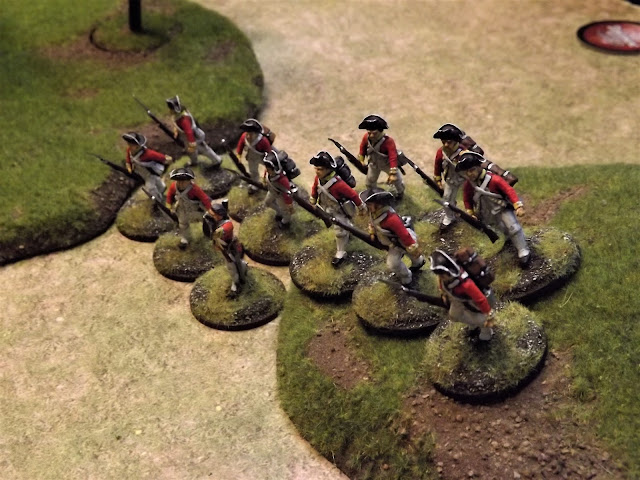 In addition the need to pay a healthy respect for the cannon able to fire along lines of sight that if not carefully anticipated would allow a bouncing roundshot to not only hit men targeted in the front, but likely take out those in direct line to the rear. This lesson cost me an Indian and two unfortunate Queens Rangers before my troops dispersed into nearby trees for better concealment and a harder target. 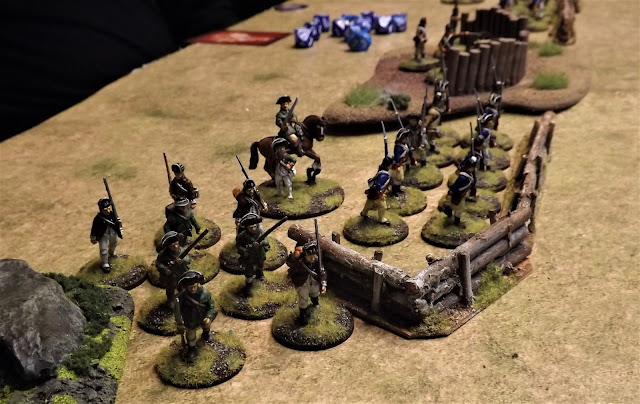 After the revelations about artillery lines of fire, the sighting table took precedence as we got familiar with the best ways of staying unobserved whilst being able to see the enemy and then finding out how effective or not small arm fire was at various ranges, which saw the odd figure dropped as the two sides closed the ranges. 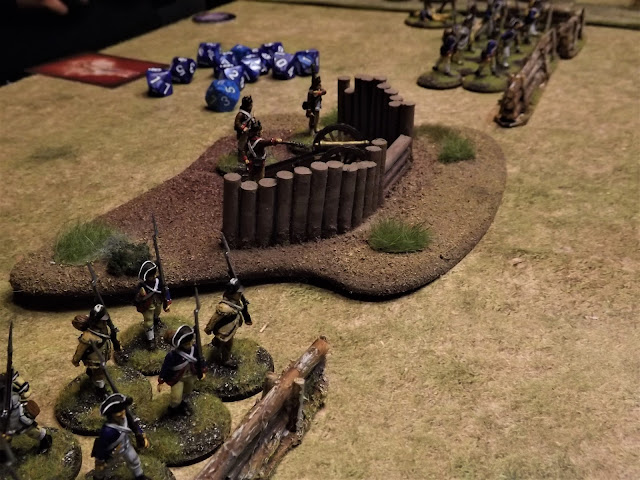 It was interesting to observe how the card play could impact on the advance or not of the various troop types with certain units like the Loyalist infantry seemingly static for large parts of the game as other priority units mopped up available command points to gain additional movement and activations to cards already played. 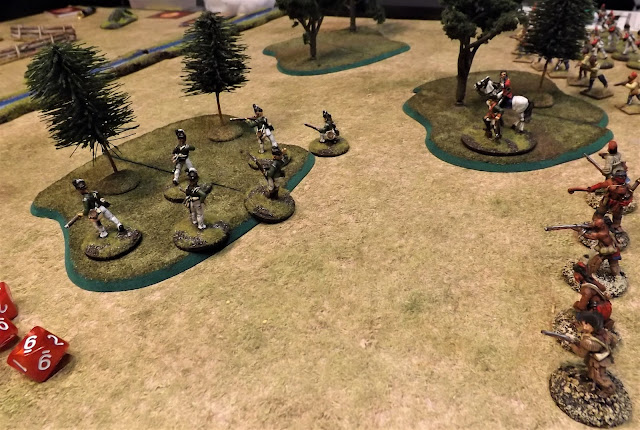 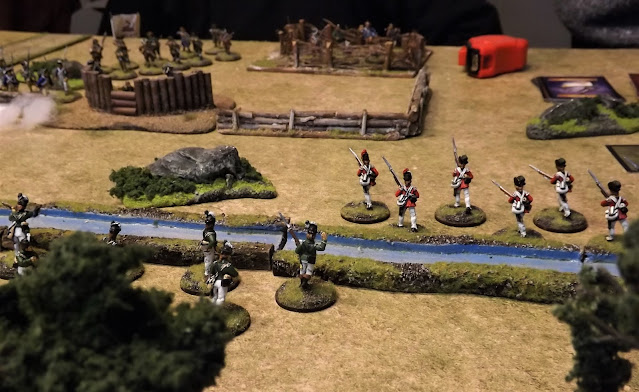 The card play and activation sequencing seemed to impact on the unfolding of the Crown plan as contact with the enemy inevitably forced changes and success demanded reinforcement with further activations before the enemy could react to try and shore up a threatened part of their line.
Thus my part of the Crown plan changed as my light troops got across the stream to threaten the Rebel left and turn their line with the Rebel riflemen, militia and gunners not seemingly relishing the thought of tangling close up with these bayonet armed aggressive troops, closely supported by Simcoe's Queens Rangers, as Indians provided sniping cover to their advance.
The demand on activation priority was soon illustrated as Mike's Rebel riflemen missed their opportunity to severely shoot up the British Light Bobs as they crossed the stream leaving them needing two activations to simply reload their very accurate but cumbersome bayonet-less rifles.
The race was then on for my Light Bobs and Queens Rangers to cover the ground and close with the enemy gunners and riflemen before they were at risk of further missile fire.
As Mike's troops demanded activations to prepare to meet the advancing British, I eagerly looked for cards and points of my own to beat him to the punch, whilst John and Si had demands on their own respective fronts to consider as both teams of players decided on priorities.
This situation revealed to me the best of the new version of M&T with the demand placed on activations and players not being able to do everything they would choose, mixed with the uncertainty of success even if they did. 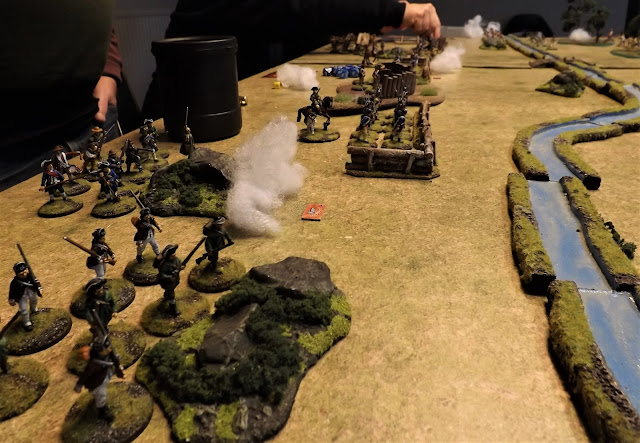 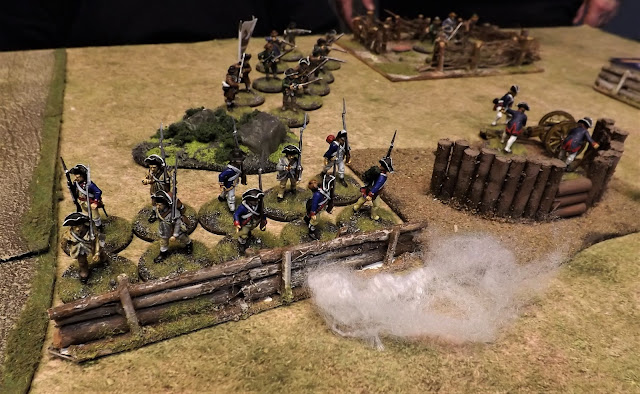 In the end it was Queens Rangers that took advantage of the situation with an audacious assault into the Rebel gun redoubt, braving the fire of a Continental company further along the line that tried to intercede as they clambered over the log emplacement and disposed of the enemy gunners. 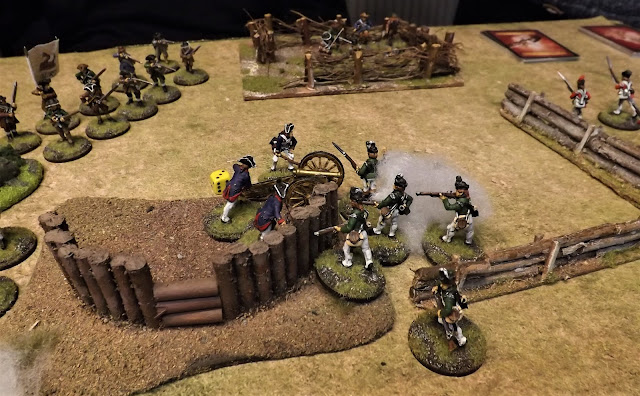 Looking to support the Rangers, the Light Bobs were in a race to deal with the riflemen to their front concealed in a fence lined paddock and receiving sporadic covering fire from a unit of militia as they desperately reloaded their rifles.
The Light Infantry subaltern, realising his men would not be able to reach the riflemen in the small enclosure, now having dropped back from the fence to reload ordered his men up to the fence and opened fire with a telling fusillade of musketry that felled four of the six enemy troops whilst the remainders failed a follow up morale test having recoiled from the fire and dispersed. 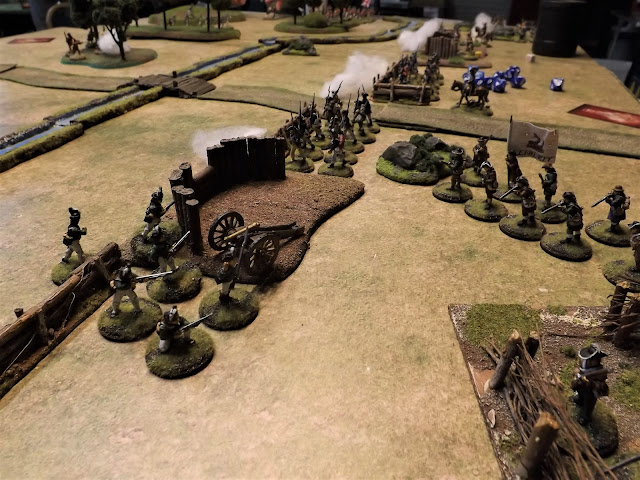 The attack of the Crown light troops proved to be the high water mark of the assault on the Rebel line as the British regulars on the other flank were decimated by fire from Continental and light troops facing them, and unable to get across the stream under such fire were forced back into the tree line as the 50% casualty threshold for the Crown force was passed, causing a general withdrawal. 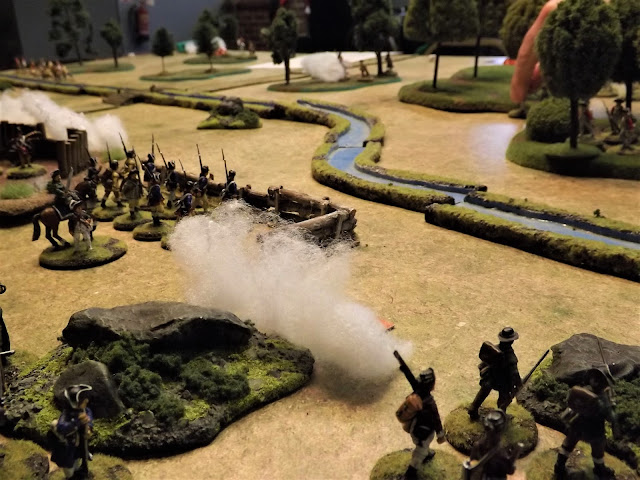 I have to say that I really enjoyed this game of the new M&T and much fun and laughs was had by all involved.
The rules have left a very favourable impression and I have a feeling no two games would ever be alike due to the variability produced by the card play and command points, so I am very pleased to have picked up a copy of the new version just after Xmas and would happily recommend to anyone that hasn't played them yet to have a go if you're interested, with the supplements now extended to cover Napoleonics and a future Colonial book planned.
Thank you to Mike C. for hosting a very fun game and to Mike R, John, and Si for the tabletop action that produced lots of thrills and spills on the American frontier.
Posted by carojon at 11:39