This week saw the sixty ninth anniversary of the attack on what became known as the Pegasus Bridge. The bridge over the Orne River/Canal system close to Caen, inland from Sword Beach, was a critical objective to secure the left flank of the Allied landings and provide an outlet for later Allied offensives. 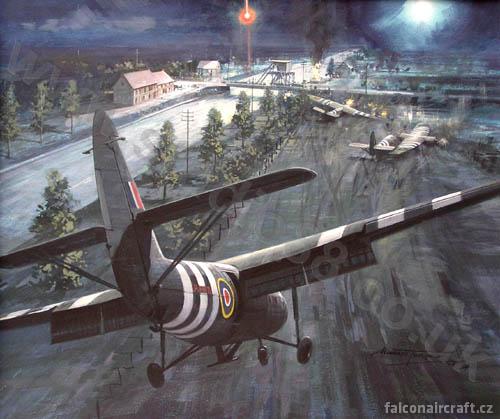 This scenario was based on an adaption of Richard Clarke's scenario published in the Too Fat Lardies 2006 Summer Special for "I Aint Been Shot Mum". We have started to play the Battlegroup Overlord rule set and so I adjusted Richard's set up to work with these rules together with a few additions of my own. If you are interested in my adaptions, I will post a description of the game plan on  JJ's Blog .


Our game began with the historical start point with Major Howard's lead glider crashed into the wire and the other platoons set to follow on turns two and three.

After the initial shock of crashing into the wire Howard's platoon made off towards the bridge with the engineers in the vanguard tasked with checking it for demolition charges.

As the lead groups closed in, the defences remained eerily silent. Would the night be suddenly lit up with enemy tracer fire?

Unknown to the Para's commander, the Germans would not open fire until the Paras came within four inches of them, simulating the lack of preparedness displayed by the German garrison.

The German sentries were on guard at either end of the bridge unaware of the enemy close at hand.

As Howard's lead platoon closed in on the bridge, two and three platoons were right behind them ready to consolidate the position.

Suddenly as the lead groups approached the bridge ramp, one of the German sentries opened fire killing the lead man.

Running back across the bridge for support from his comrade, he yelled "Alarm" as the other man loosed off two quick shots at the approaching figures looming out of the dark.

Suddenly, in response to the German fire, a fusillade of rifle and bren gun fire ripped through the air and both sentries dropped.

The firing had not gone unnoticed by the German HMG section manning the pillbox who sleepily peered out from their vision slit as their comrades grabbed helmets and rifles. They only had seconds to see British Falschirmjagers retreating back down the communication trench having just placed charges on the bunker entrance. The MG42 let rip, killing four men in the group, just as the charge exploded silencing the bunker in flame and smoke.

The explosion alerted the remainder of the garrison who, seeing the bunker eliminated and British troops swarming into their positions on the opposite bank, fell back on the Platoon HQ and the buildings outside of the perimeter.
﻿﻿
The German troops, having overcome their initial shock, opened up a furious volley of machine gun and rifle fire as the Paras attempted to cross the bridge. The first two sections that attempted to run this fire were shredded in it, with all the men killed or wounded.

Howard called a halt to these foolhardy rushes and concentrated his men to return the fire with interest, pinning and killing half the remaining Germans. As the German fire slackened the first British sections were able to gain the opposite bank and enter the empty positions.

With the Germans engaged at close range the end came quickly and those of the defenders still standing slipped away into the darkness.
﻿
Now that the bridge garrison was neutralised, Major Howard set about reorganising the perimeter defences and setting up his HQ to radio back the success of the mission to the fire support ships off shore.

As the 21st Panzer Division was known to be close at hand it was important to establish potential ambush sites with the PIATs.

Suddenly the clanking and squeaking of tracks could be heard in the darkness as German armoured recon units cautiously approached the bridge intent on linking up with the defenders.

As the lead tank closed on the first house it fired its main gun to ward off any potential attackers. The Paras held their fire and their nerve.

Then the order to fire was given and a volley of six PIAT bombs was launched at close range.
At these ranges the PIAT crews, on spotting their targets, could fire two shots each, requiring two or more on a d6. It was then that the British commander rolled six ones, one after another!! What are the odds of that?

The lead German half track crew couldn't believe their luck as their SdKfz 250 mounted
the bridge and prepared to open fire with its machine gun. With something close to desperation, the Para commander ordered his men into close assault before the German Panzer men could take advantage of their good fortune.

The Gammon bombs proved much more effective than the PIATs and three of the four German vehicles were soon on fire with both tanks knocked out. One of the tanks falling victim to a flank shot from the one remaining round available to the Paras manning the German pedestal gun on the opposite bank.

As the remaining German half track reversed up the road back into the darkness, the first elements of Brigadier Pine Coffin's Parachute Brigade marched up to Major Howard's HQ, indicating the first of the reinforcements had arrived.


And so ended  our anniversary game of Pegasus Bridge, much like its historical predecessor with a win to the Ox and Bucks Light Infantry, Air Landing Brigade, but after a doughty fight by the German garrison.

Thanks to Ian, Jack and Charlie for a great game with some highly entertaining die rolling!
Thanks also to the Battlegroup Overlord rule set giving a very enjoyable flowing game that really helped capture the events of sixty nine years ago.
Posted by carojon at 00:17 No comments: