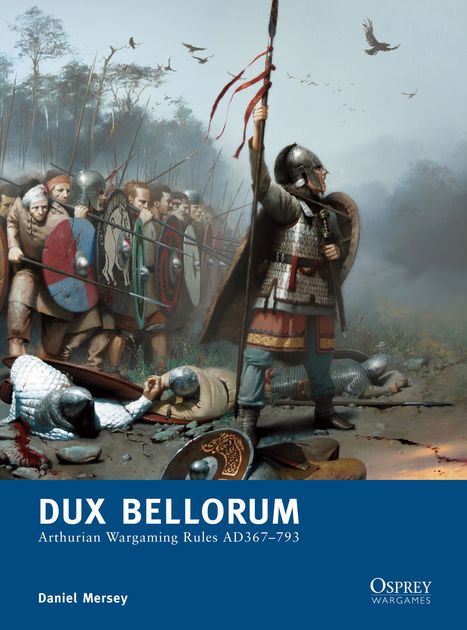 One of four games played this month was a very large game of Dux Bellorum fought using the lovely figure collection of Nick who offered to run the game following a conversation had about these rules for use in Dark Age battles.

Several of us in the club have collections of Dark Age figures and we have played various rule sets for this period including Dux Britanniarum and Hail Caesar amongst others, and with a few of us having these rules but not having played them it was a great opportunity to see how they translated to a game on the table. 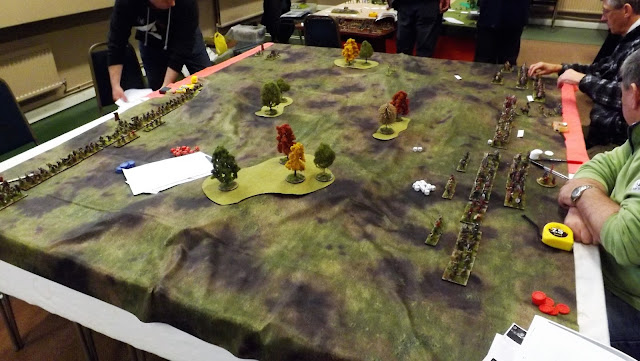 A standard game of Dux Bel. is based around an army design of thirty-two points with a number of units of figures from anywhere from half a dozen elite quality troops to about ten or twelve units in an average force of cavalry and infantry.

There are eight army lists in the rules that cover Late Roman, Romano-British, Welsh, Saxon, Pictish, Irish, Land Raiders and Sea Raiders with other options to be seen designed by players on the Dux Bel Forum.

As with many modern rule-sets, the units can be stylised around your own bases with any number of figures with the proviso that opposing armies are based the same and that units have the same width or as close as, with movement and ranges worked to the chosen base width. 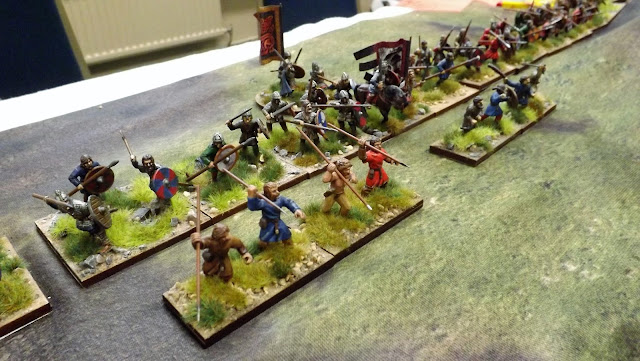 There are various troop types defined, based around how they fought, with both cavalry and infantry characterised as either formed troops (warriors and riders) or open order types (foot and mounted skirmishers). The warriors and riders are further defined as to quality and commitment, with the both either defined as ordinary, noble or companions. To the formed infantry types can be added a further classification identifying their preferred fighting style of fast moving, hard hitting warriors or more deliberate and stoic but no less fearsome shield-wall types. 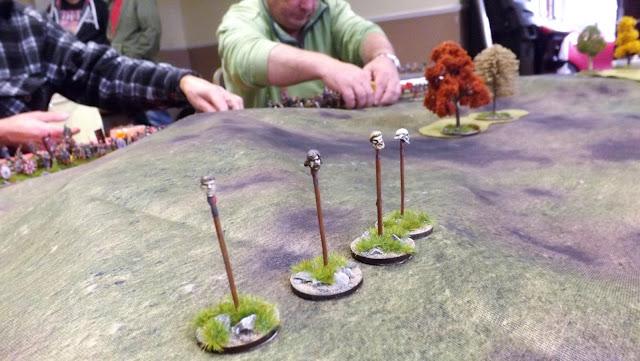 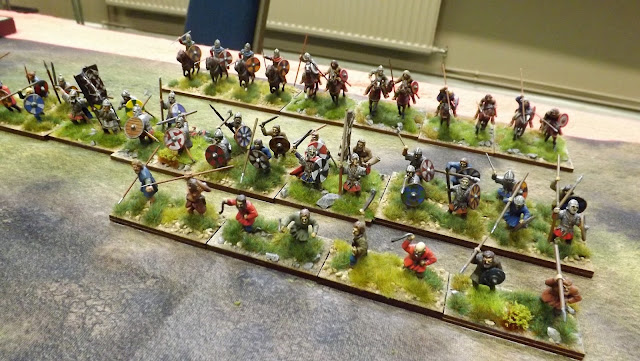 For yesterday's game we fielded four typical Dux Bel armies, two Saxon and two Romano-British which in 28mm presents a compelling spectacle of a game when both lines of figures face off across the table. 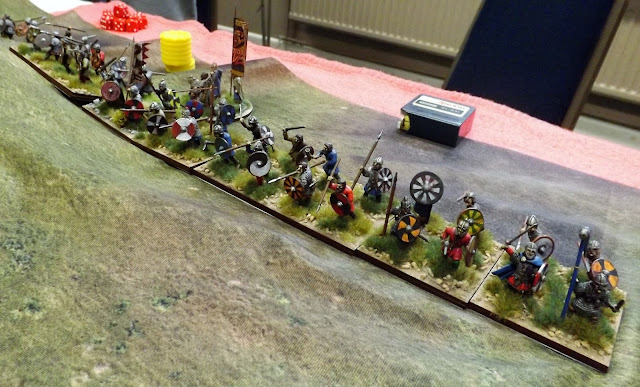 Each of the armies was commanded by a player with two of us on each side commanding our own groups looking to coordinate our activities against the common enemy and was fought as a simple line em up and fight scenario looking to break the other side first, just to see what the rules produced as a game. 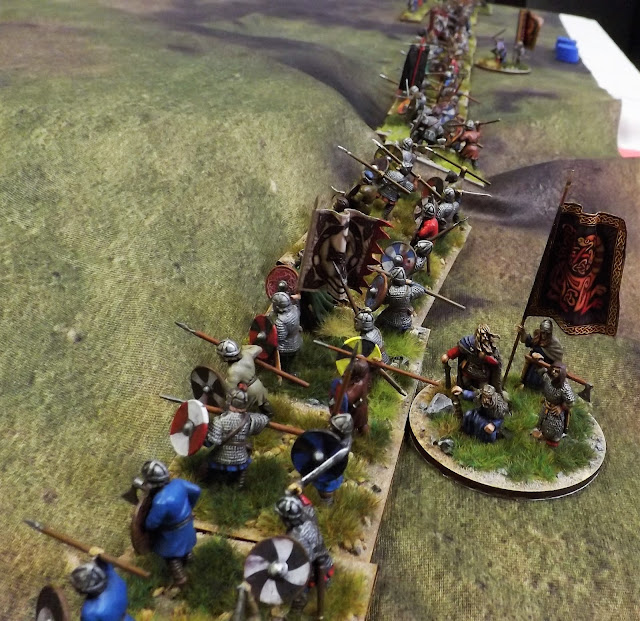 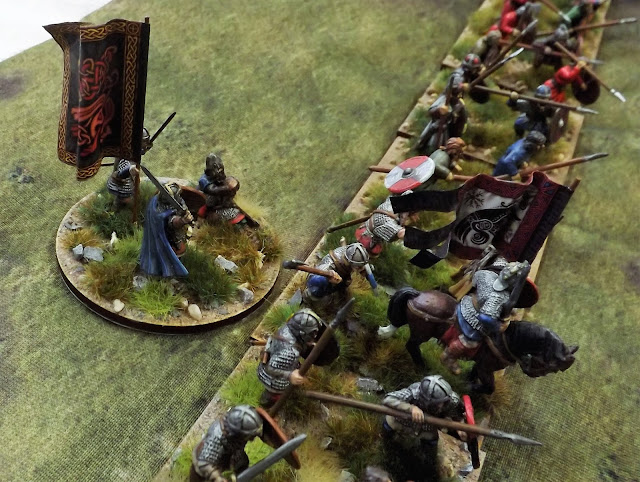 The structure of the game is based around identifying who is the 'Aggressor' and who is the 'Repeller', Attacker and Defender in English, either determined by a specific scenario outlined in the rule book or by adding an army specific 'aggressor' rating to a die roll to see which is which.

This determination directs the deployment stage of the game with the Aggressor starting the process of phases which sees the putting of troops on the table, first with foot skirmishers, then mounted skirmishers followed by the non-skirmish types, with each phase seeing the Aggressor place first followed by the Repeller, being placed as per the scenario or between three to five base-widths from the table centre line. 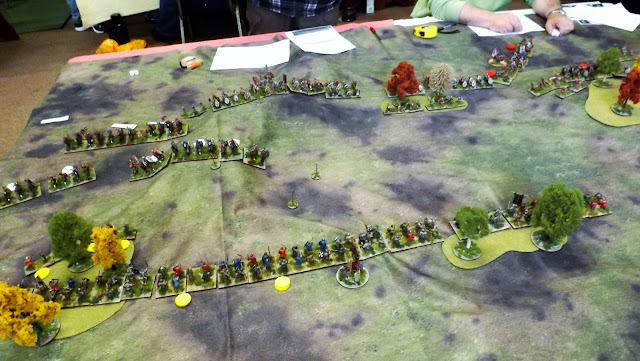 Units of the same type can be deployed and moved as individual units or together in groups, which enables a quick deployment  to positions bar terrain getting in the way, that can break up groups; but also facilitates mixing better quality units in with lower types to enable the formers willingness to advance on the enemy to influence the group as a whole to advance. 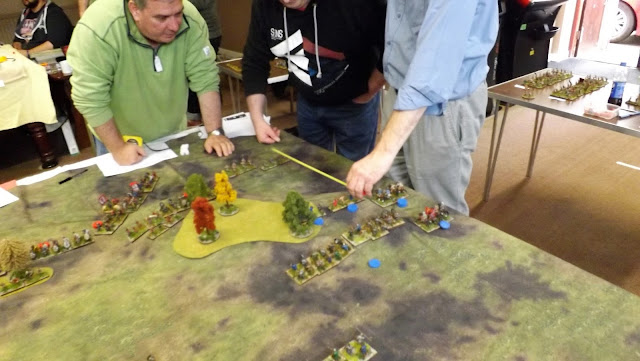 Perhaps the most interesting aspect of the design is the use of Leadership Points (LPs) that represent the ability of the Commanding General to impose his will on his army to move, fight and defend and is described as representing those sub-commanders within a given army who work to make the commanders plan a reality during the battle.

In the pictures of our game you will see white/red (Romano-British) and yellow/blue (Saxon) discs placed behind various units representing the deployment of these LPs with a maximum of three being able to be placed against one unit and with each of our player commanders having eight such LPs at the start of the game. 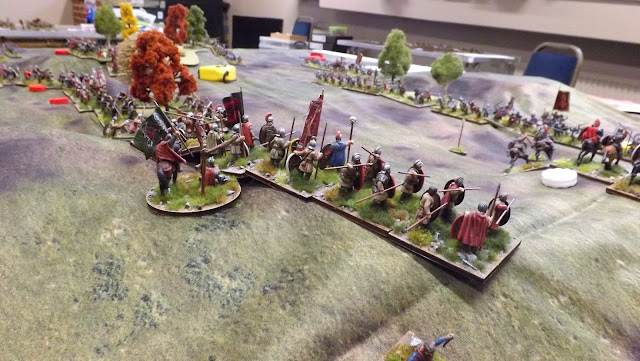 The LPs use was up to the player to announce at a given time but commonly were used to negate casualties inflicted in combat or to add dice when throwing to cause casualties, but could also be used to make it easier to move or grab the initiative in a phase of play. 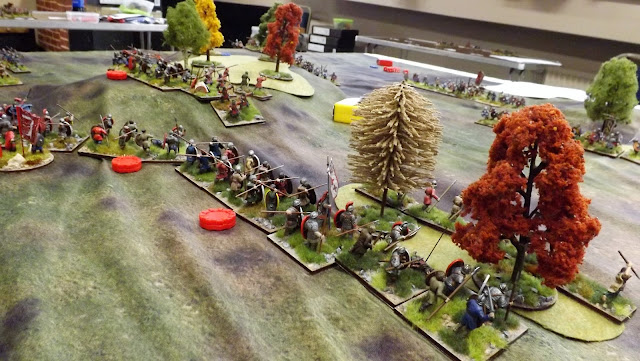 The LP's are however, the kernel to this set of rules, in that with each unit destroyed in play an LP would be removed from that armies pool and thus the difference in ability to fight the battle between forces with dramatically different LP pools became more and more obvious as the game progressed; giving the player with a lot more LP resource the ability to deploy them in numbers to affect particularly important areas of the battlefield.

In addition with games finished without a clear victory established, the difference in remaining LP serve as a ready indicator of the victor in any close run fight. 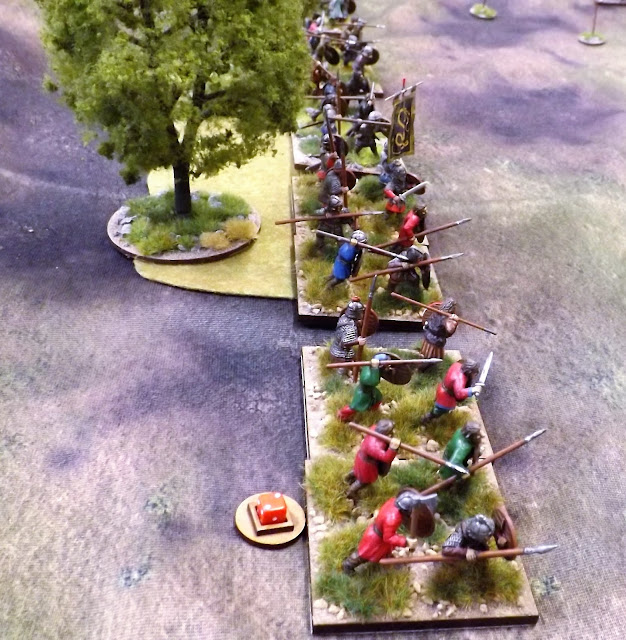 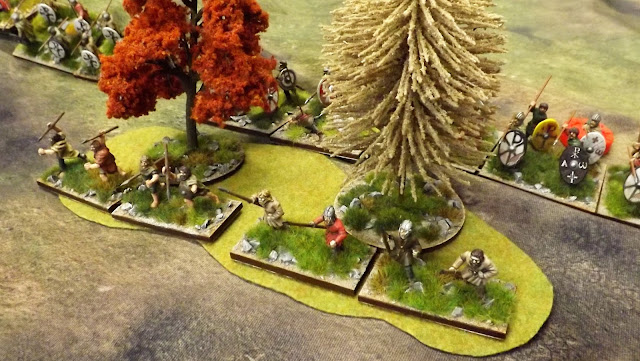 Thus as our game progressed the placement of LP became a game in itself as both sets of players tried to gain an advantage in a particular fight within the larger battle or to guess where a fight was likely to occur in the upcoming round and to make sure key units were suitably provisioned with added benefit. 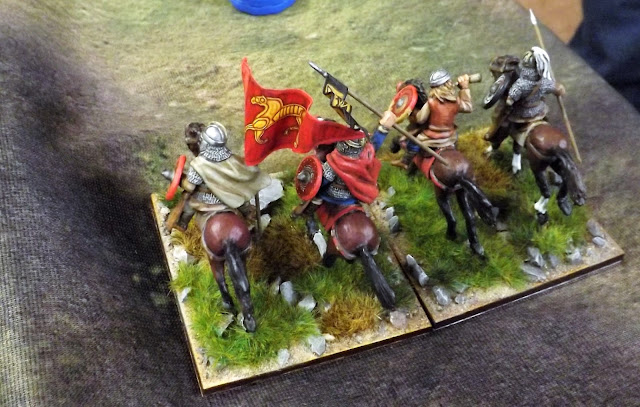 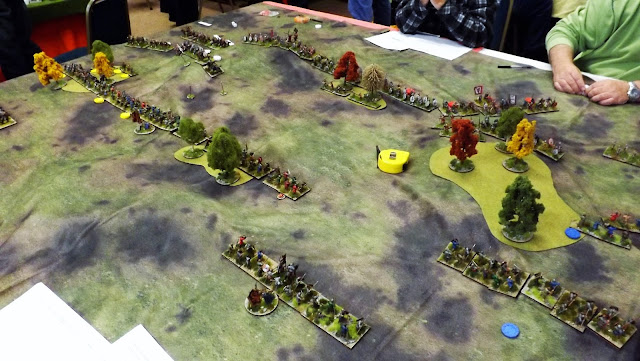 Th other aspect of Dux Bel that struck me, was the modelling of skirmish units, with some armies such as the Picts for example having large numbers of this troop type.

Skirmishers are quite fragile in their ability to take casualties, usually no more than two, leading to their removal. They do not find it that easy to get out of the way of formed troops and thus simply sticking them out forward of your line is a good way of getting them written off for very little payback.

Not only that but their loss contributes to loss of LP so choosing where and when to use your light troops becomes an art in itself. 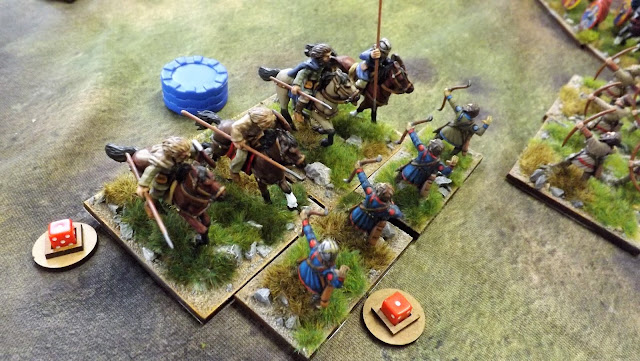 The strength of the skirmish elements are to support your formed chaps by getting them in behind the enemy once gaps have opened in the line. They can then support combats with attacks from the flank or rear and shoot up enemy formed troops busy facing off against their enemy opposites.

Not only that but a well placed skirmish base might cause an enemy formed unit to become uncontrolled seeing them barrel forward unsupported only to be taken out by your nearby multiple groups of formed troops supporting your skirmishers.

The other thing to mention is that although loss of skirmish elements reduces LP they do not count as units lost for the 'test army morale' thresholds of 50% and 75%, but the LP effects demand using them thoughtfully.

The turn sequence is pretty straight forward with the Repeller starting the process of laying LP followed by each side firing and moving, followed by close combat and morale checks.

The movement sequence is further segmented into the Aggressor moving first followed by the Repeller with the sequence of skirmishers, mounted and then foot troops.

I think, for me, this was perhaps the least satisfying aspect of the game in that movement became a bit gamey with a thought process of trying to assess the likely response to the various move options given that you knew that that would be the sequence. This was slightly  relieved by the fact that LP could be spent to alter that with a particular unit buying the right to move first always providing that the other side didn't out bid the bidder, with a simple die roll being the decider once both sides had thrown three LP's at the problem.

I think I would prefer a more random sequence of move activation similar to Augustus to Aurelian, with all the factors of better command ability built in and I think that would be something to look at. 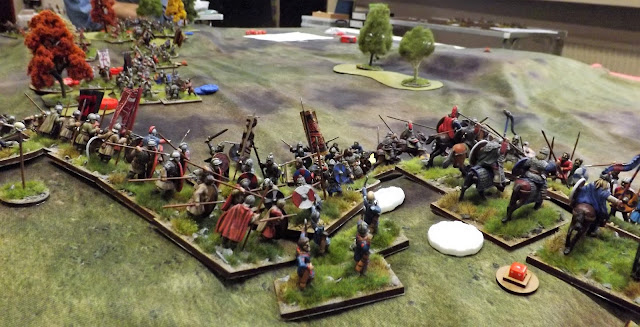 That said I really enjoyed my first outing with Dux Bel and we soon had the rules rocking along with LP play becoming a very interesting game within the game of bluff and counter-bluff. 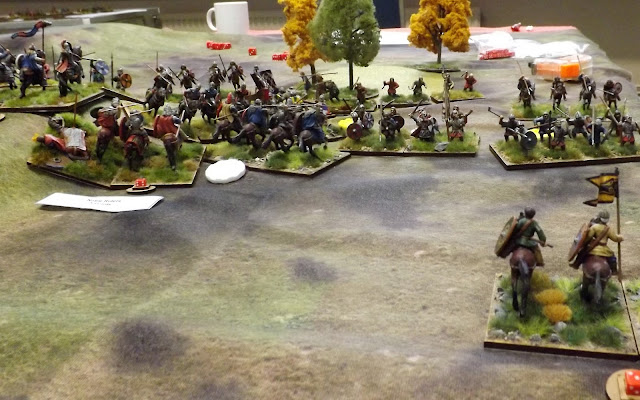 Our two lines went at it and after a lot of fighting, gaps started to appear among the units and between the amounts of LP held by each of the four commanders.

These gaps offered opportunities to exploit with sudden envelopments of key parts of the lines coupled with multiple LP used to add more combat dice rather than to defend against a weakened enemy. 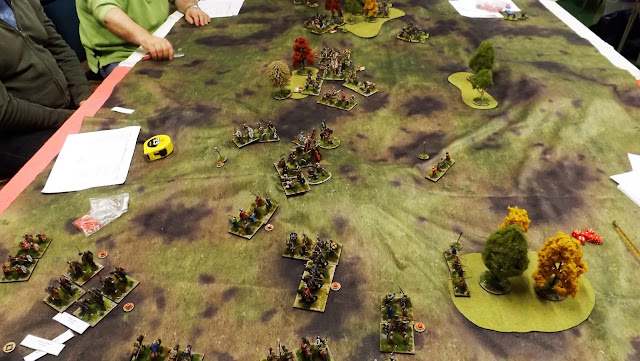 Eventually forces were reduced to 50% of the units they started with causing morale checks on those still on the field with failure causing their removal and with a 75% loss deeming the whole army breaking. 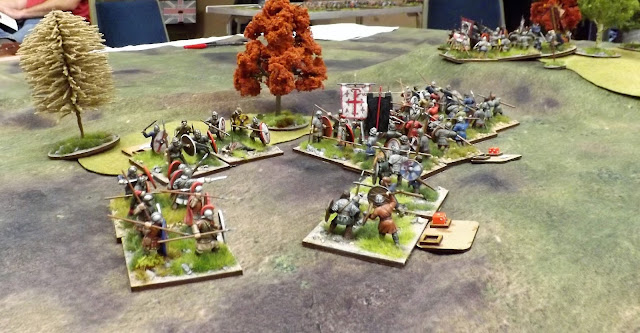 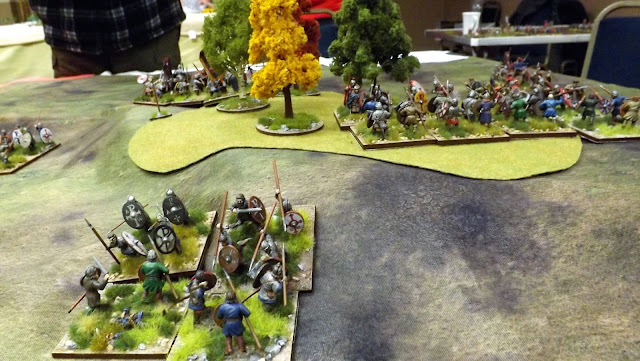 For those interested in who won, the Saxons grabbed the day but not without a major fight and many casualties going up against a lot of British cavalry and infantry shield-walls. 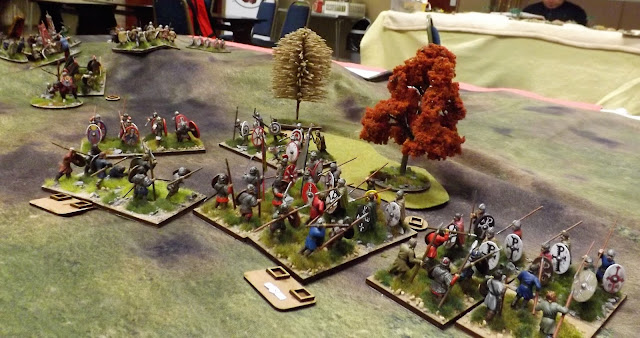 Dux Bellorum gives a good game with plenty of fun and characterful options that make a Saxon army quite different from a British, Irish or Pict force and also produces a big battle look on the tabletop.

Many thanks to Nick who set up the game and provided the two armies and to David, Jack and Mr Steve for a very entertaining game of Dux Bellorum.
Posted by carojon at 18:09