My wargaming projects normally run over a two year cycle and this year I was supposed to finish off my two new 15mm 7YW armies of Russians and Ottoman Turks and also get my 20mm Sikh wars stuff onto the table. Well one out of two isn’t bad, the Sikhs I am afraid suffered from that perennial military problem of project creep and has had to be rescheduled.
On the plus side at least I don’t have to draw up and present a recovery plan.

So first time on the table for the new boys and these armies have a few toys we haven’t seen before such as skirmishing light cavalry , light infantry and people with knobbly sticks and really not a lot else , didn't anyone tell them that its never wise to bring a knife to a gun fight .


Onto the game and so I set the scene:

As far as wars go this one hadn't been too bad thought Pasha By, the Governor of the small Bulgarian town of . True the overall war wasn’t going very well but there was no way that any blame could be attached to him and he had so far managed to avoid being in any real danger .
Fortunately the Russians had spent all of the winter across the other side of the Danube and by all accounts had been ravaged by the plague; with no signs of any movement in the near future then hopefully it would all slowly drift towards a peace treaty and he could go home and tell of his great exploits and maybe even a promotion.
Yes, things had turned out much better than he had hoped as he lazily reached for his sherbet and stretched out his legs onto Nathan, his favourite vibrating footstool.
Just then an aide disturbed his tranquillity accompanied by a man heavily covered in dust,
“A thousand pardons effendi but Imperial cavalry have just arrived and their leader Mustapha Leak insists on speaking to you”
“ My compliments Governor but I have orders from the Grand Vizier , the Russians are across the river , they have split into 3 columns and are attempting to encircle our forces , one of these columns is coming this way and you are instructed to hold them at all costs “
“But how? My forces are inadequate for such a task, they are only local units and militias, I cannot possibly hope to stop the Russians”
“ Don’t worry  Pasha , I have brought additional forces to assist you , along with my Siphais which I will leave you , there will shortly arrive some Janissary's and other regular infantry , the Grand Vizier has even spared you some artillery from the reserve , I suggest you start making preparations immediately , Good Luck”
“Oh, and Governor, I need not remind you how failure is rewarded “
Suddenly it didn’t look such a good day after all.

The Objective of the game was for the Russians to leave by one of the three roads and for the Ottomans to stop them. 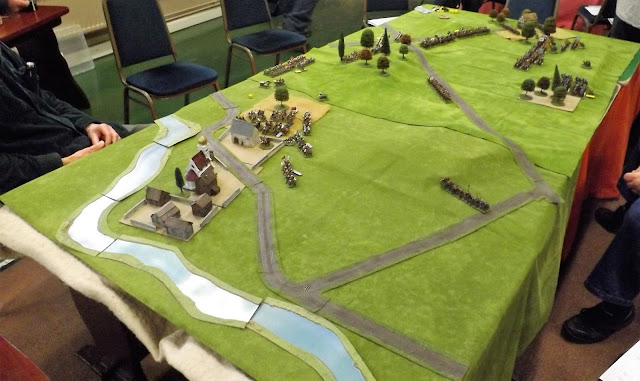 With the bulk of the Ottomans Tarter allies hurriedly returning to the to try and stop a second Russian army from annexing it, this left them completely out scouted so the Turks  had to set up all of their forces on the table first.  Azzars and Feudal troops garrisoned the Town and the cavalry were placed out on the left flank with Janissary's blocking the crossroads. The remaining Brigade of Sekhan infantry along with some guns were stationed in-between so as to be able to react quickly. The dice roll for the Grand Viziers artillery turned out to be another Light piece and so disappointingly I had to put all the siege guns back in the box. 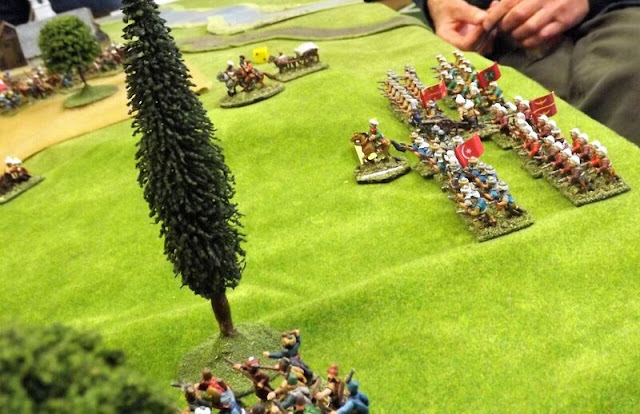 The Russians had to concentrate and so they chose to attack towards the crossroads, their infantry massed for a big push flanked on their left by Dragoons and by swarms of Cossacks to the right.

Seeing the Russian infantry block heading towards the crossroads, the Ottomans had to somehow slow them down enough so that reinforcements could be hurriedly sent across to help the Janissary's, this job was given to the Provincial and Imperial Siphais who bravely dashed out towards the advancing green and red masses.


Like most wargaming rules KK allows you to make double moves as long as you are a set distance away from the enemy and the advance of the Ottoman Cavalry soon reduced the Russians to their normal movement.  Over on the extreme Russian right, the Cossacks had rapidly moved around the farmstead and on though its woods and were trying to flank the Ottoman cavalry. This didn’t go that well , Koenig Krieg’s key point is initiative , you roll off each turn against your opponent to decide who moves a brigade until everyone has taken an action , the same applies for units in combat . The key is in deciding if you or your opponent should make a move when you win the roll , do you wait and see what they are doing or do you need to jump in.


Let me give you some examples : Your cavalry has a lovely open flank to charge , as you won the dice roll you send them in however your opponent hasn’t activated that brigade yet, when it’s their turn they could move away or turn around to face . If you pass the turn over then maybe he still doesn’t move this brigade and picks another or he might turn them around and charge you . Melee is a separate phase and after everyone has moved or fired then all those units still in close contact get new activation markers . Here the initiative is even more crucial , if for example you force your opponent to activate a unit then they must either pass , or charge . Infantry & guns can fire defensively if they have an activation marker so you can fire as they come in, if they decide to pass and so pick up their activation market then you can charge in without being shot at if you still have your marker.  Who has the initiative and when to use it is the main point you have to grasp when playing Koenig Krieg.

Back to our game, the Cossacks had the initiative and decided to try and sneak around the Ottoman cavalry, unfortunately they still their activation marker and in their turn they moved into close contact range. Things looked grim for the Cossacks, however they could still use their special ability of evading as long as they won the initiative and moved first. They didn’t, despite the Russians having a +1 advantage on all initiative rolls ( better General) and so the Imperial Sipahi charged in, it was a slaughter of biblical effect, not handicapped by the mounds of dead Cossacks the Sipahi risked exploiting ( passing the mandatory ‘‘cavalry go Loopy roll’ ) and hit the line behind with the same effect , risking again going un-controlled they used their 2nd exploitation to run down a unit of dismounted Cossack light infantry as well. 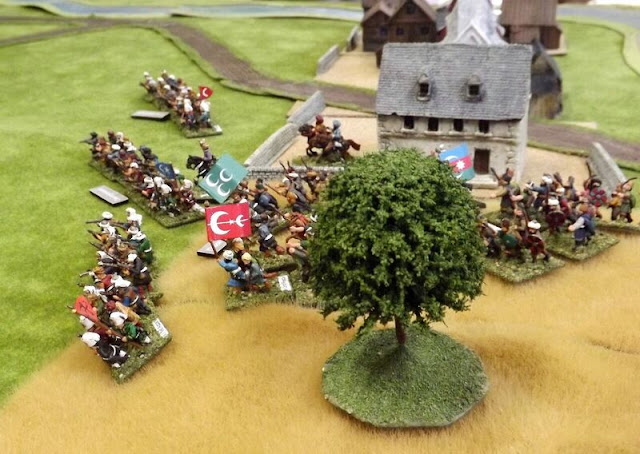 Elsewhere Ottoman Infantry poured out of the town and columns of dubious infantry rushed as quickly as possible towards the key crossroads. The Russian infantry plodded on with their battalion guns now starting to fire on the annoying cavalry to their front hoping to make them retreat . In this era infantry can face off cavalry as long as they are not too badly beaten up so they kept going ever forward. Eventually the Ottoman cavalry had no choice and they charged ; to the great shame of the Imperial Siphai they failed their morale (casualties had reduce an automatic pass down to 1-5) and stopped dead , next turn wasn’t a lot better as although they managed to pass the morale roll this time they now failed to break in past the bayonets ( with lance , 3-6 ) and fell back. The Russian infantry continued to blast away emptying more saddles but using up more time , Both Siphai squadrons did eventually get into melee but now reduced in strength and totally surrounded they went down fighting , the Provincial cavalry being somewhat less brave ( morale of 4 as opposed to 6 ) retired back onto the Ottoman left wing .

Reinforcements had now got to the crossroads and started to line up in support of the Janissary's plus the first units of Feudal troops were just appearing on the crest of a small hill and were looking down on the advancing Russian infantry.

The Russians moved on and the Bashi Bazooks charged down the hill to be met by a volley of defensive fire from the nearest Russian regiment, undeterred they pressed on and an inconclusive melee took place. Ottoman artillery now started to play on the Russian infantry with balls bouncing through multiple targets trying to weaken the imminent attack on the Ottoman troops holding the crossroads

The Russians were now finally in position to launch their infantry in a mass attack to sweep away the Ottomans blocking the crossroads, who would get the initiative?

It didn’t matter as we had run out of time, The AGM had gone on far longer than normal and we had lost almost an hour of play.

Who won? Well the Russians are still on the board so I guess it’s the Ottomans but I would have liked to seen what happened when all those infantry attacked .

This was a tricky game for the players as only one of them had played the rules before and we also had some new troop types on the table that we  didn’t really know the right way to use properly so didn’t get the full benefit.
You do however get a lot of Ottomans for your points so I can see them being a bit of a nuisance as long as their army morale holds up . Also if I had bigger armies then an extra Russian Brigade appearing on the far road leading to the village later in the game might have caused some mischief. 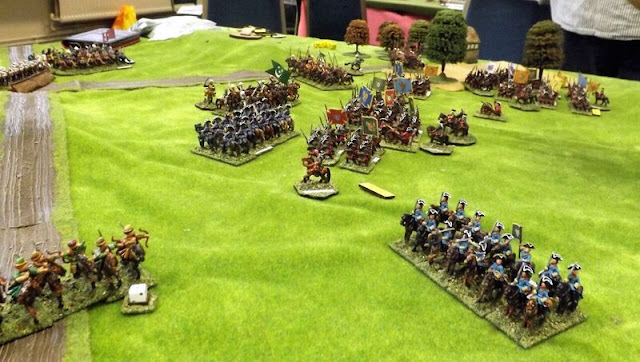 Thanks to all those who took part and allowed me to try out my new toys.

So whilst I am waiting for them to be released I better think about what do next, should I expand these armies by 250 or 500 points or do I instead get the British Household Cavalry for my allied army? Or maybe an Austrian army perhaps, they could fight the Ottomans. Hmm , what to do.

This has been a Mr Steve production