Yesterday was Armistice Day which coincided with our monthly club gathering so at the eleventh hour of the eleventh day the Devon Wargames Group observed a minute silence in memory of the fallen of two World Wars and since.

The day was also special in that the club has been growing quite rapidly in recent months and with new members has seen an increase in the games being run which saw four games put on yesterday which was really great and added to the 'hubble-bubble' of the banter and conversation of happy wargamers doing what we do best.

Finally there was a task set last year at the club's Annual General Meeting to produce a club banner to be displayed at the events we attend and put on games and this was a matter that was not completed in time for this year's review of last year's minutes. 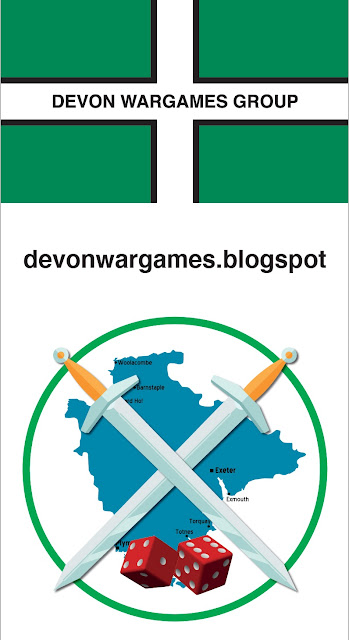 The situation was remedied within a month of this year's AGM and Devon Wargames Group can now present its new banner, which was on display at yesterday's meeting.
Posted by carojon at 09:19