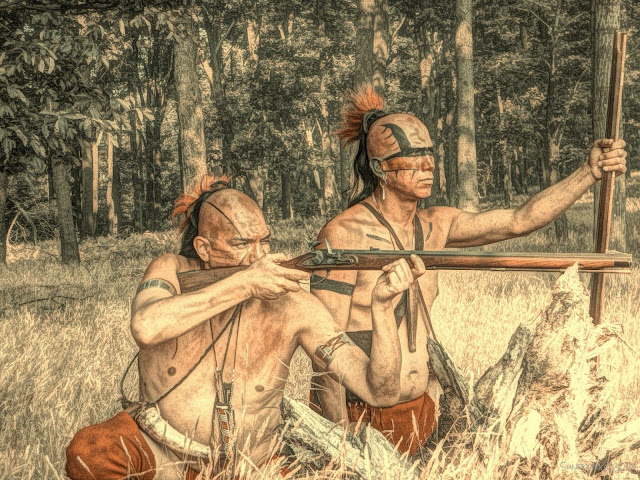 Steve M took us back to the French Indian War this month, using his fine collection of 28 mm figures. Black Powder II rules were used, together with appropriate amendments for the specific period. 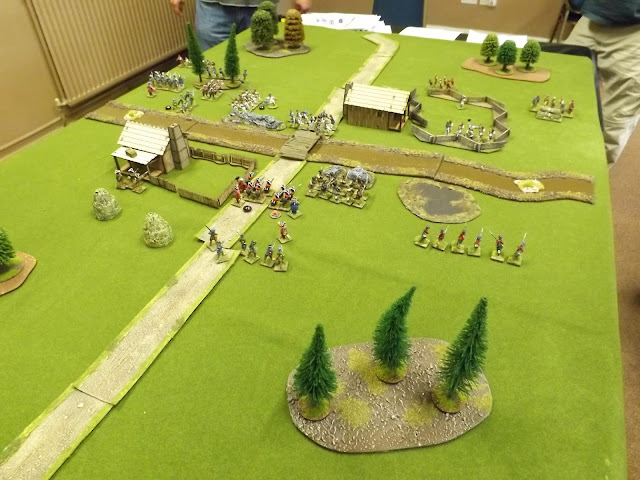 The game featured an encounter between a French & Allied force and a British & Allied contingent. Both sides were acting on intelligence and were converging on two farms near a river crossing.

We French had a mix of regulars, marines, militia and Indians and were facing a similar force on the British side. We were seeking concealed supplies and arms, that local gossip said were stored in the farm buildings and around the bridge. The British had heard of our raid and were trying to secure the
supplies and weapons too. 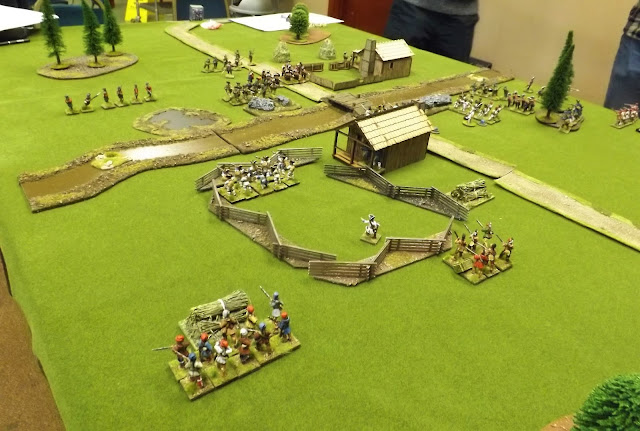 On winning the initiative, we decided to press strongly towards the nearest farm and bridge. We secured the farm by means of a brisk march and laid hands on the supplies. We also got in position behind some rocks near the bridge too. Naturally some units were slower to react and the tardy movement of some our militia and skirmishers, left a ford on the river open. 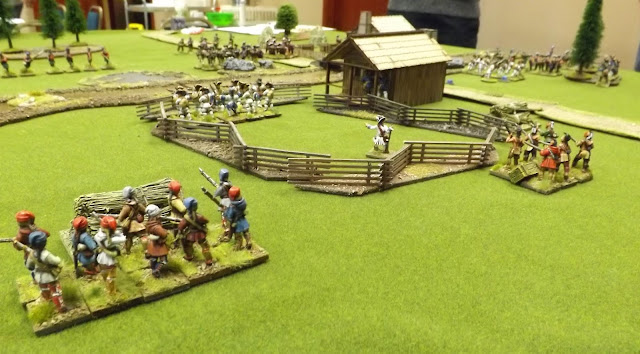 After a slow start, the British occupied the farm on their side of the river (making safe some supplies) and made to contest the bridge. Meanwhile some regulars and skirmishers pushed through the ford and came under fire from our marines and skirmishers from the nearby woods. 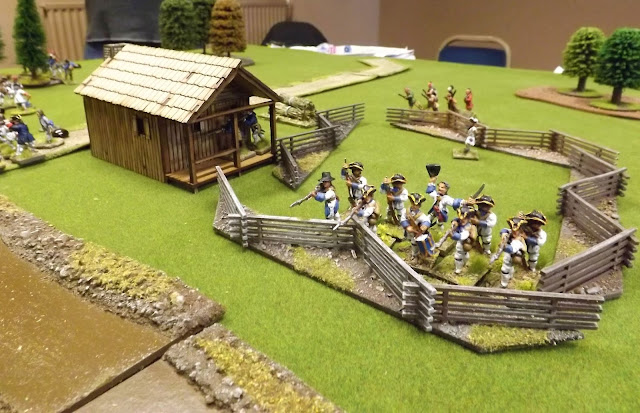 With fire being exchanged along the river, both sides advanced their commanders to steady their men. We needed not have worried, as neither side could shoot for toffee. This state of affairs continued for several turns and then both sides got their eye in. 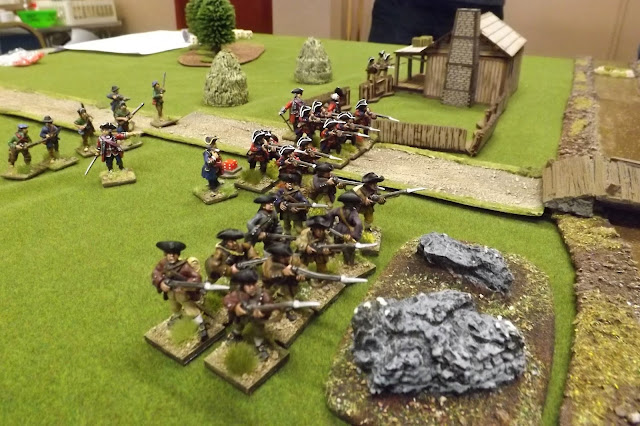 French regulars took this opportunity to push up to the bridge, where they located and retrieved the cache of guns concealed there. At the same time a unit of French Indian allies were sent to the rear with the supplies found in the farm.

With the woods by the ford being contested, the French marines and skirmishers were forced back. Meanwhile a British unit tried to force the bridge, with covering fire from militia units driving back the French regulars on the other side. 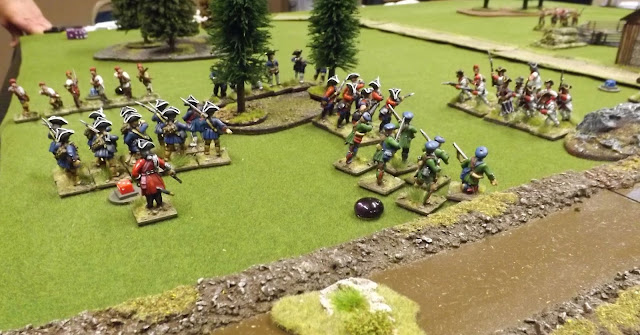 Seeing the threat, the French commander steadied his line and brought militia across to threaten the British on the bridge. At the ford, the British were across in strength and took the woods, only to be forced back by fire from the reinvigorated marines and skirmishers. 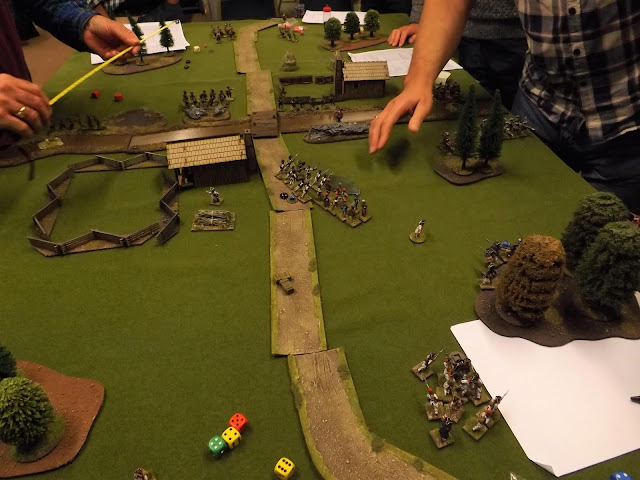 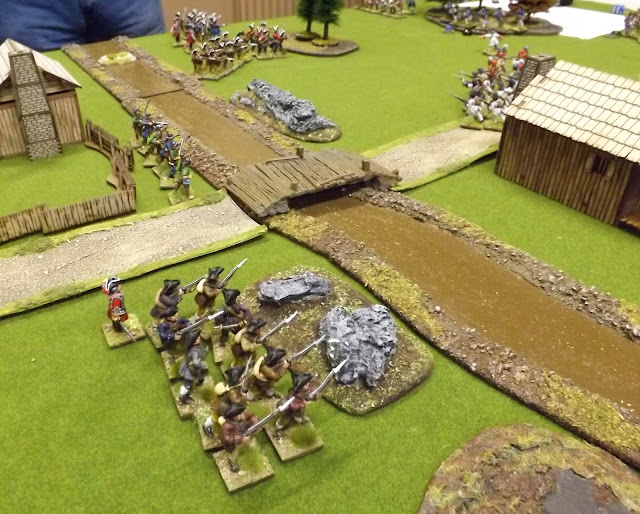 The French weren't having it all their own way though and a unit of sorely pressed regulars made for the rear. Fire near the ford thinned both sides and the two forces sought to disengage, as units of both flavours streamed past their remaining steady troops. 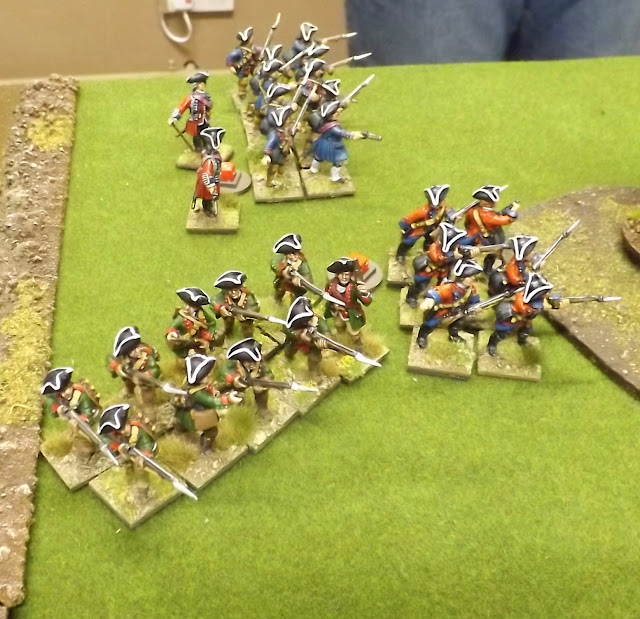 At this points we decided neither side had any fight left in them. The umpire called it a minor French victory, with two caches being in French hands, to one in British. 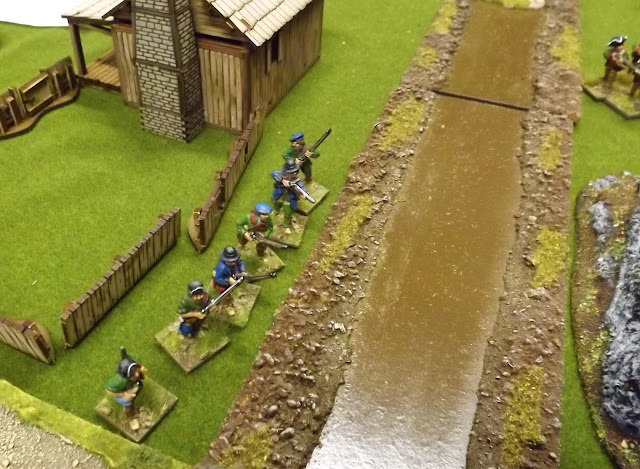 I understand the French Indian allies had a high time of it and moved to New York on the proceeds from selling the captured supplies!

Many thanks to Steve M for an entertaining game and to my fellow players for taking it all in good part.

Vince
Posted by carojon at 09:42 No comments: 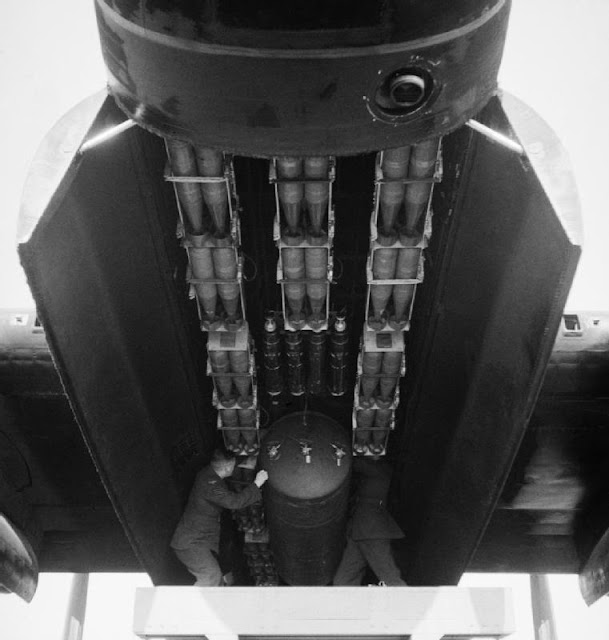 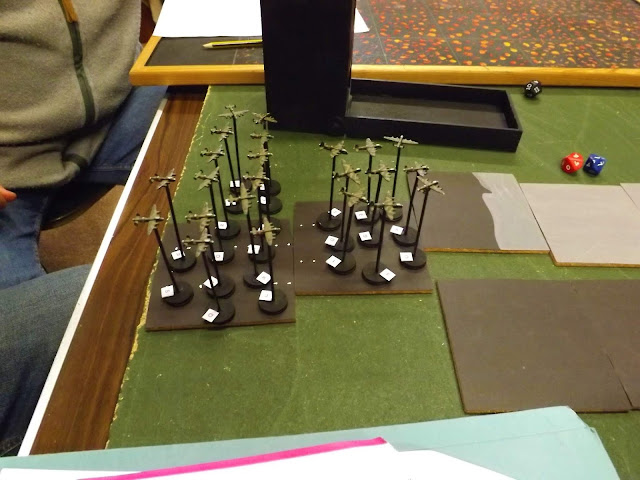 A well directed attack on the target saw the points scored for the multiple fires achieved cancelled out by the aircraft and crews lost. 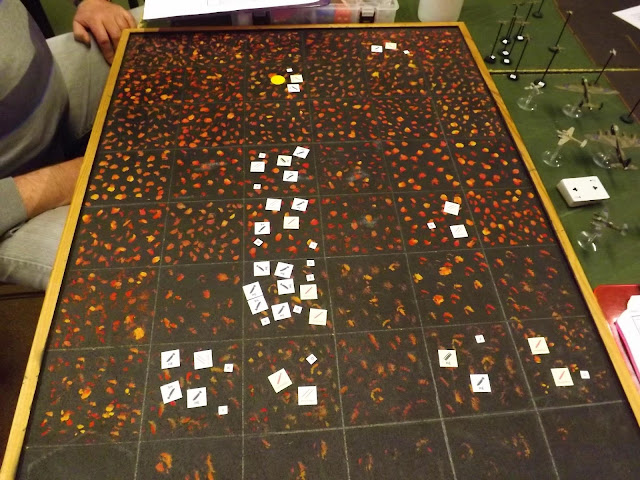 If you would like to find out more about how the game played and the position of the campaign now at its halfway stage, you can read an account of the days play on

Thank you to Steve L, Bob, Mike, Everett and David for braving the flak and nightfighters.