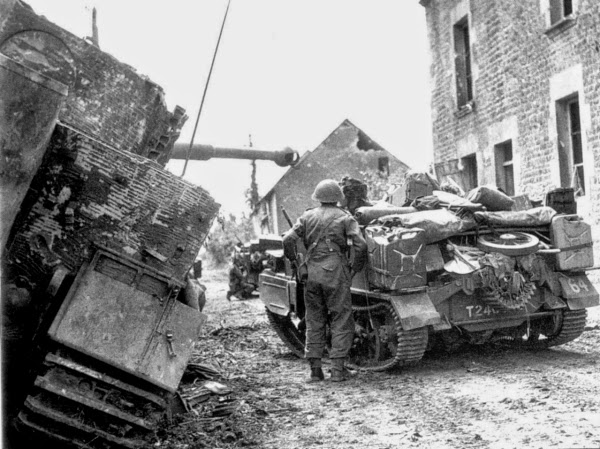 At this month's club meeting I got a chance to play Battlegroup Panzer Grenadier by Dave Brown. The scenario chosen from the collection "Battles for the West 1940-45" was Rauray. 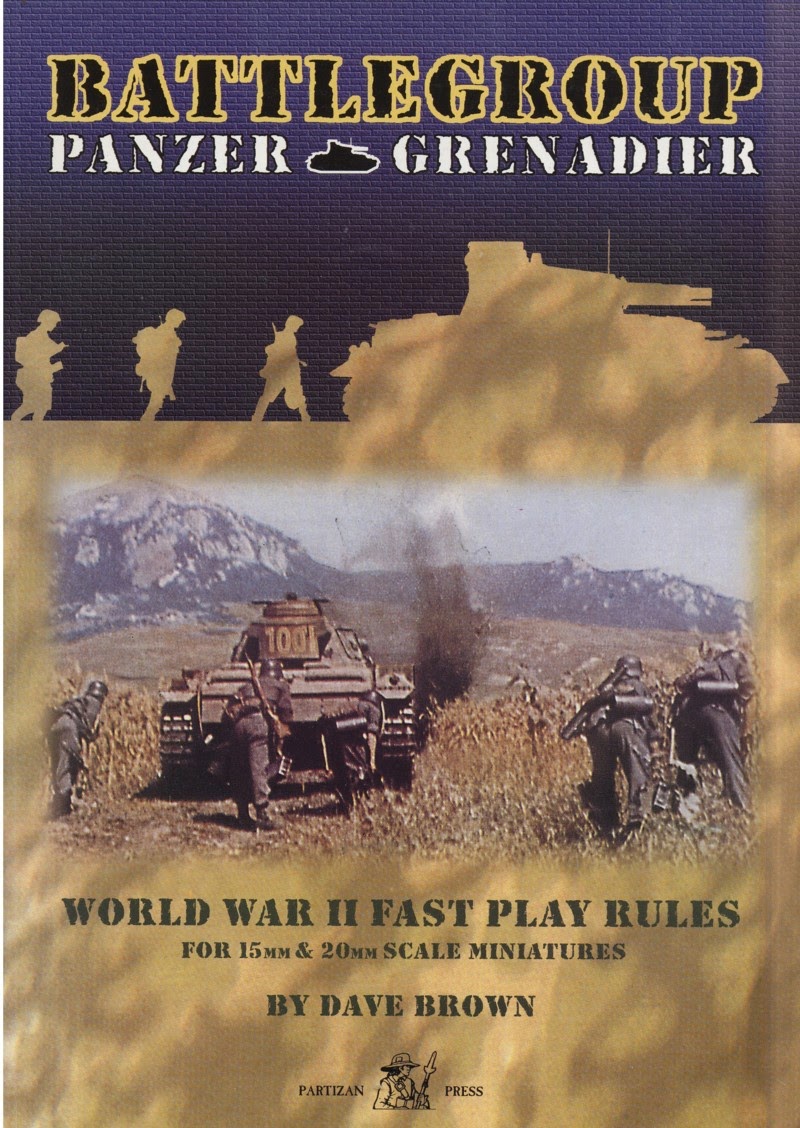 The Briefing for the game states
"In the aftermath of Operation Epsom, the German high command in the west ordered immediate counter-attacks against the newly created British salient, with the intention of driving the British Second Army back to the coast of France. Attacks by the 9th and 10th SS Panzer Divisions went in against the eastern shoulder of the Epsom salient. The opening German counter-attacks were led by 9th SS Hohenstaufen under SS Sturmbannfuher Weidinger and immediately came up against the forward positions of the depleted Tyneside Scottish, of the 49th West Riding Division dug in in front of Rauray". 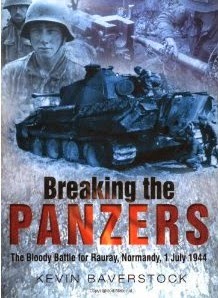 With hidden and dug in units marked on the map the scenario started with the lead German elements entering the table from the top right to the road in the picture below.

The Britsh "Battlegroup de Winton" consisted of an infantry company supported by six pounder antitank guns, field artillery, mortars and a support platoon with HMG, PIAT and 2" mortars. Armoured assets, of three troops of Shermans and a troop of M10's, were due to arrive about an hour into the battle. The secret weapons for the British were that, due to ULTRA intercepts, they were pre-warned of the coming attack and thus had units dug in and hidden; and they had APDS ammunition for their AT guns.

The first German units from KG Weidinger, 9th SS, were Panzergrenadiers supported by Panzer IVs, armoured recon and flamethrower half tracks. Their approach across the wheat fields was quickly spotted and the first 25lbr and 3" mortar shells started to drop amongst them, causing early casualties to the dismounted infantry.

In response the German troops quickly spotted what they thought was a British AT gun position and brought it under direct fire from their tanks. The British infantry, close by, was forced off the hill and suffered high casualties in its withdrawal. The gun, however, was a dummy position and continued to be targeted by the German tanks.

As the German advance closed, the British antitank guns revealed themselves one by one. and by the end of the first hour the Panzer IV kompanie was burning on the outskirts of Rauray.

However the British had lost two infantry platoons on either flank and their third, on the hill on the British left flank, was under heavy attack from Panzergrenadiers with flamethrower halftracks in support. The last remaining 6lbr AT guns and the mortars were desperately firing into the ranks of the oncoming Germans to add their support to the British infantry's small arms fire.

On the British right flank the German infantry and recon units had penetrated the wood driving off the British infantry and the anti tank guns, despite suffering casualties from British artillery fire.

It was at this time that the Germans fed in reinforcements with Panthers and further infantry support. The British artillery fire stopped, their support missions were over, and this left the 3" mortar platoon to carry on the fight. The British commander had now the option to deploy his armour assets to support the remains of his defending infantry units clinging to the village buildings and the hill.


At this point the record of the action stops!
Was the author killed by a sniper and his pocket book of notes taken by a passing Panzergrenadier?
Nothing quite so dramatic, I had to leave the game to join my son in Cornwall for his 21st birthday, and as I write this account I still don't know how the game ended.

However, as soon as I get an update on the final result I will add the detail to these pictures of yesterday's game.

My impressions of "Battlegroup Panzer Grenadier" is that they are a solid set of rules that seem to offer a reasonable simulation of a WWII battle. I think we all found the several tables in the game, needed to assess combat situations, a little bit cumbersome; but to be fair once we had played through a few situations the basic factors were quickly memorised and play started to speed up. These rules with, a figure scale of one model representing two to four men or two to three AFV's or guns, are scaled for bigger battles, that I would have previously used "Rapid Fire" or "Spearhead" for. In that respect I think they offer a very suitable alternative to those rule sets.

Thanks to Ian for setting up, this, his first game at the club, and to Steve H., Steve L, and Nick for an enjoyable game in the Rauray Salient.
Posted by carojon at 20:56 2 comments:

We had a WWII theme to games in the club yesterday and I managed to take a few pictures of the Finns vs Russians game on the next table.

As you will see the Finns were attacking a defended Russian line with tanks and armoured cars and when I came over to take the final pictures the first trenches had been entered and cleared of Russians. 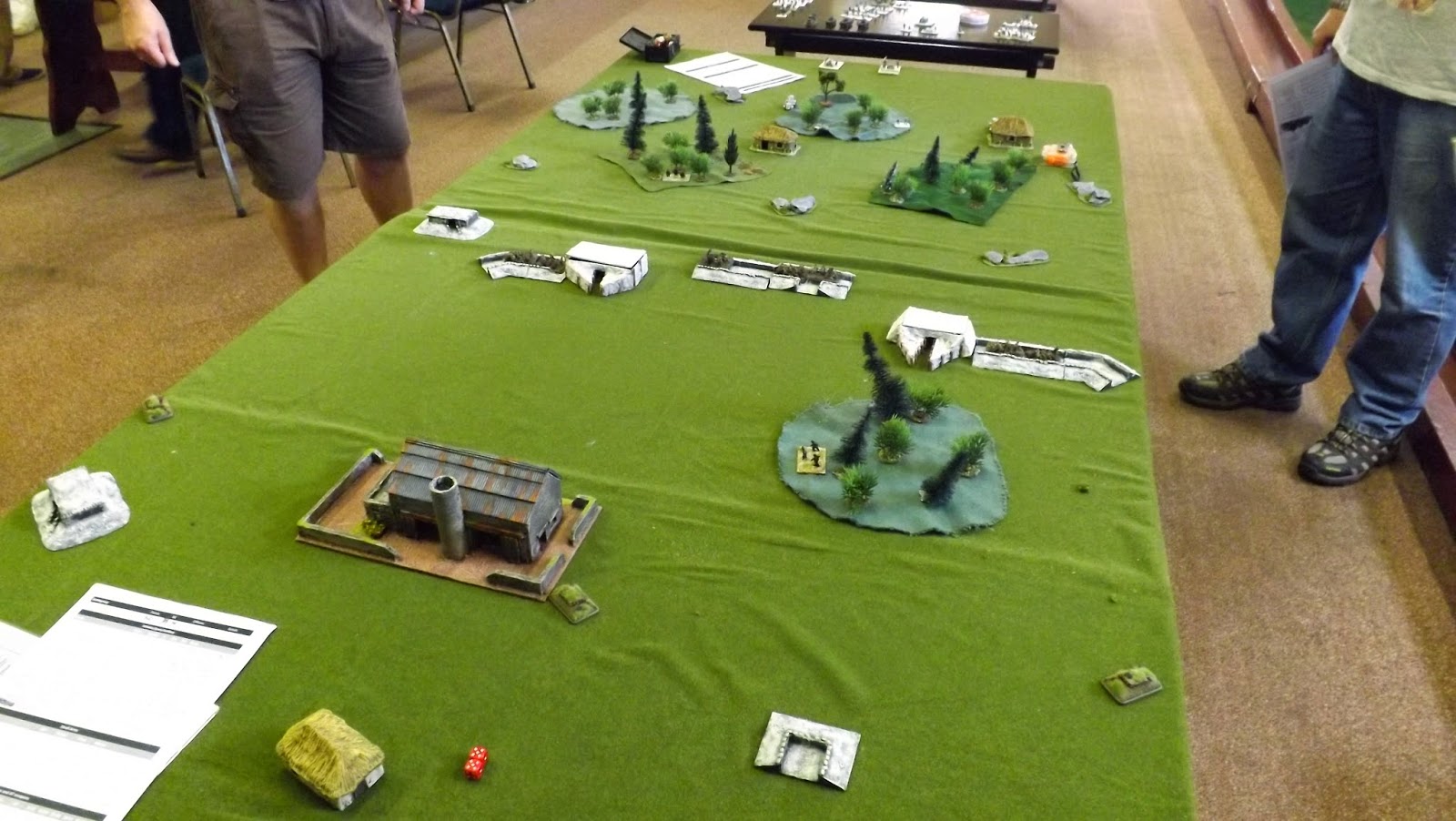 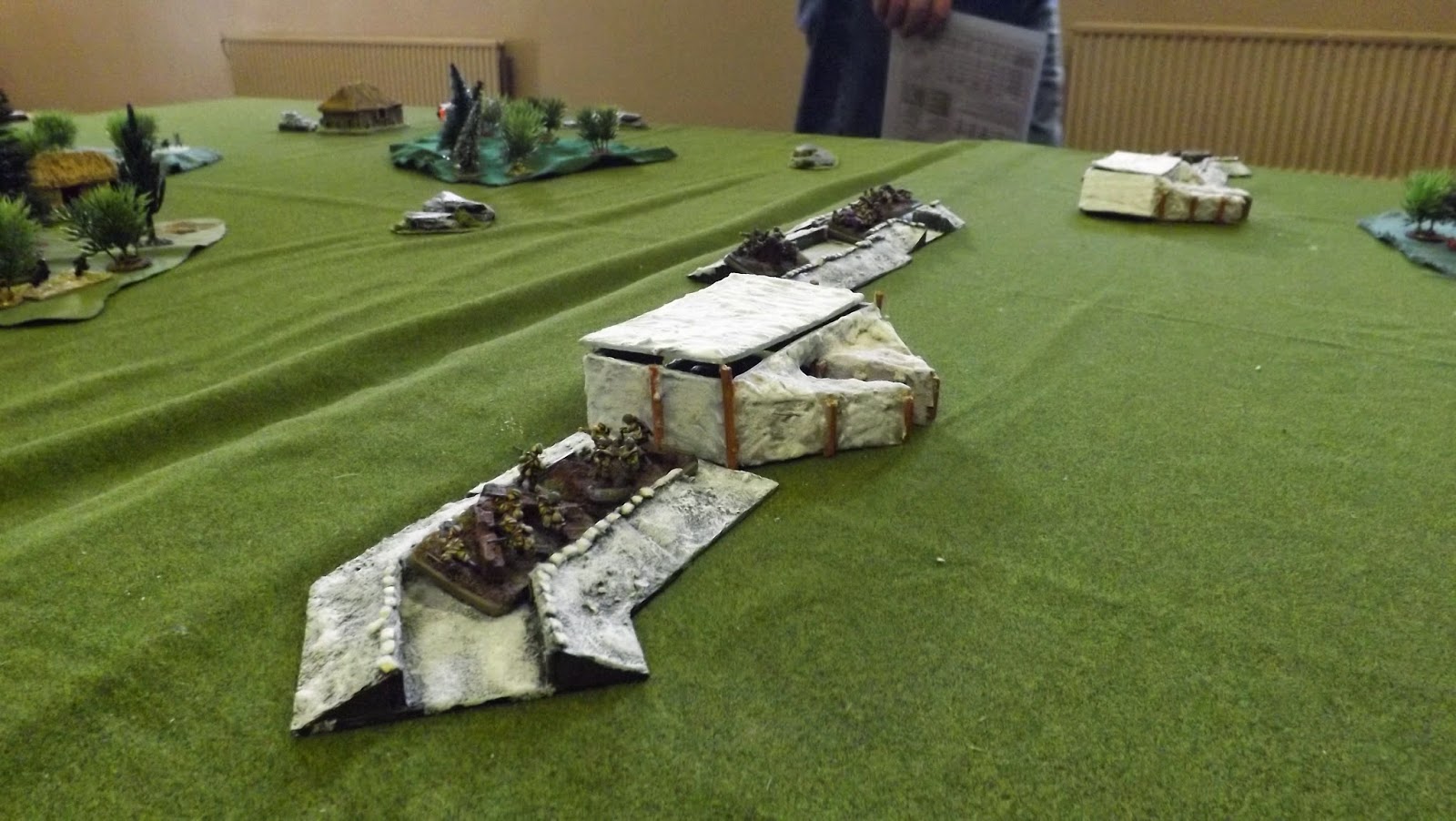 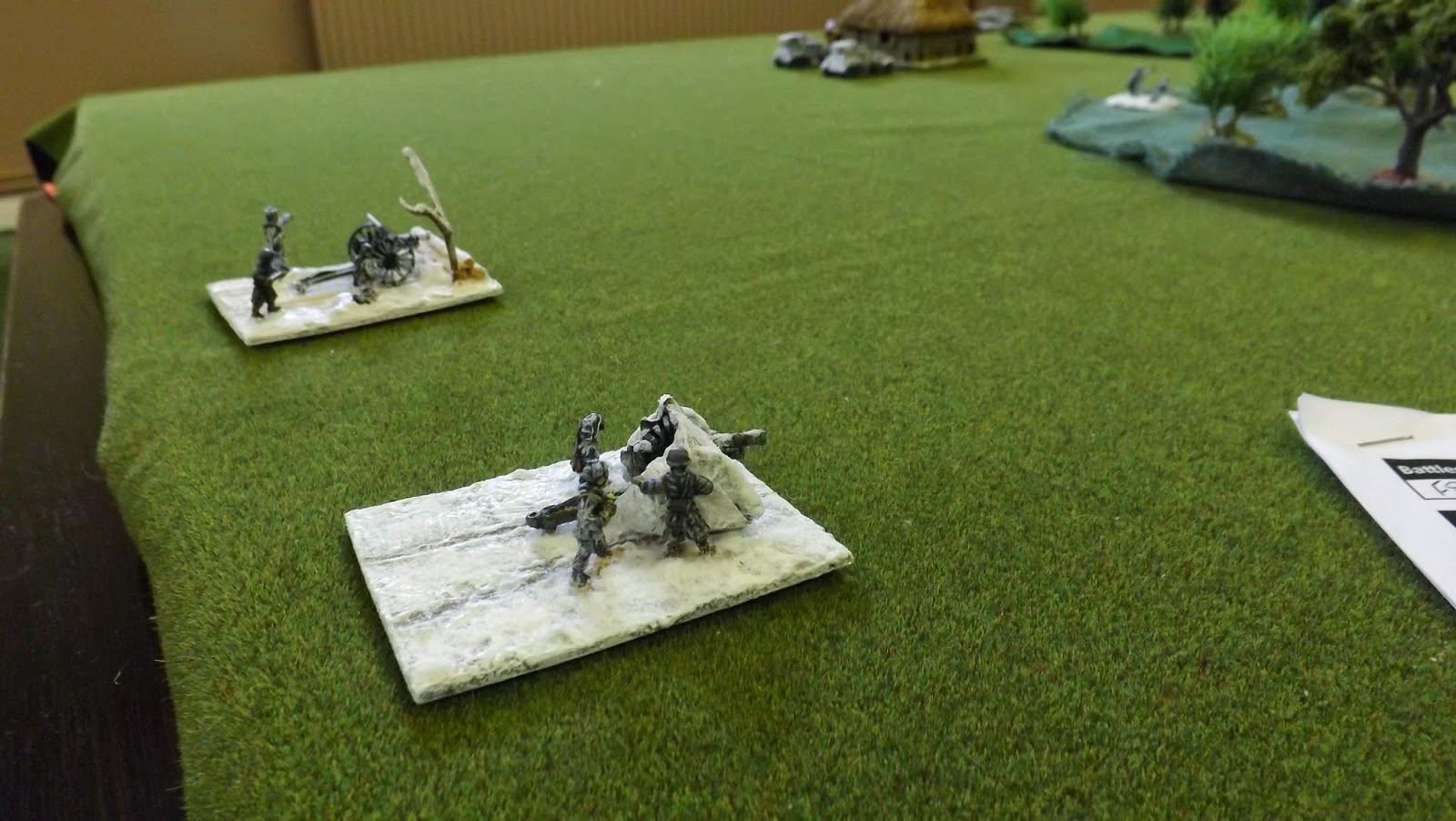 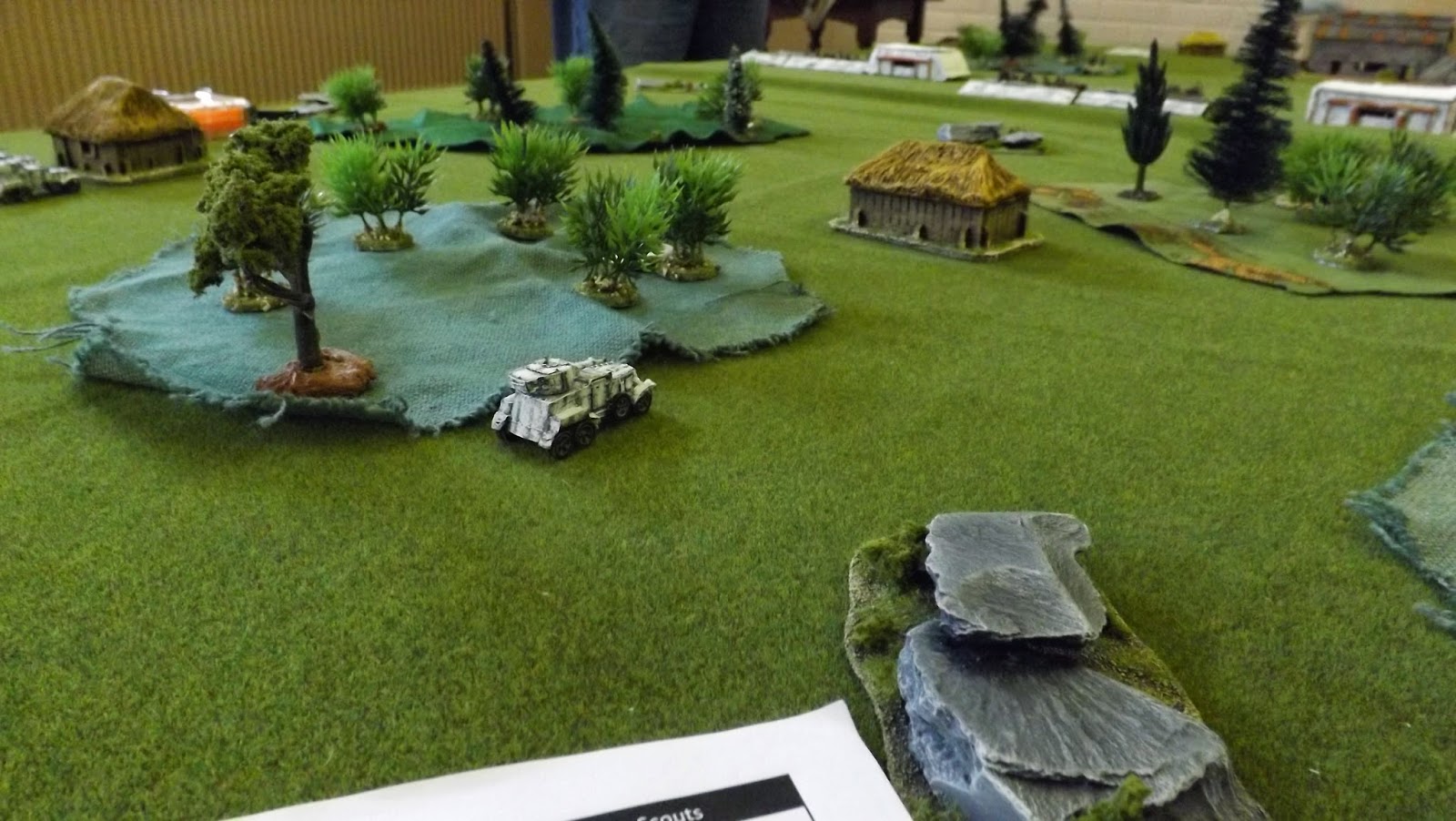 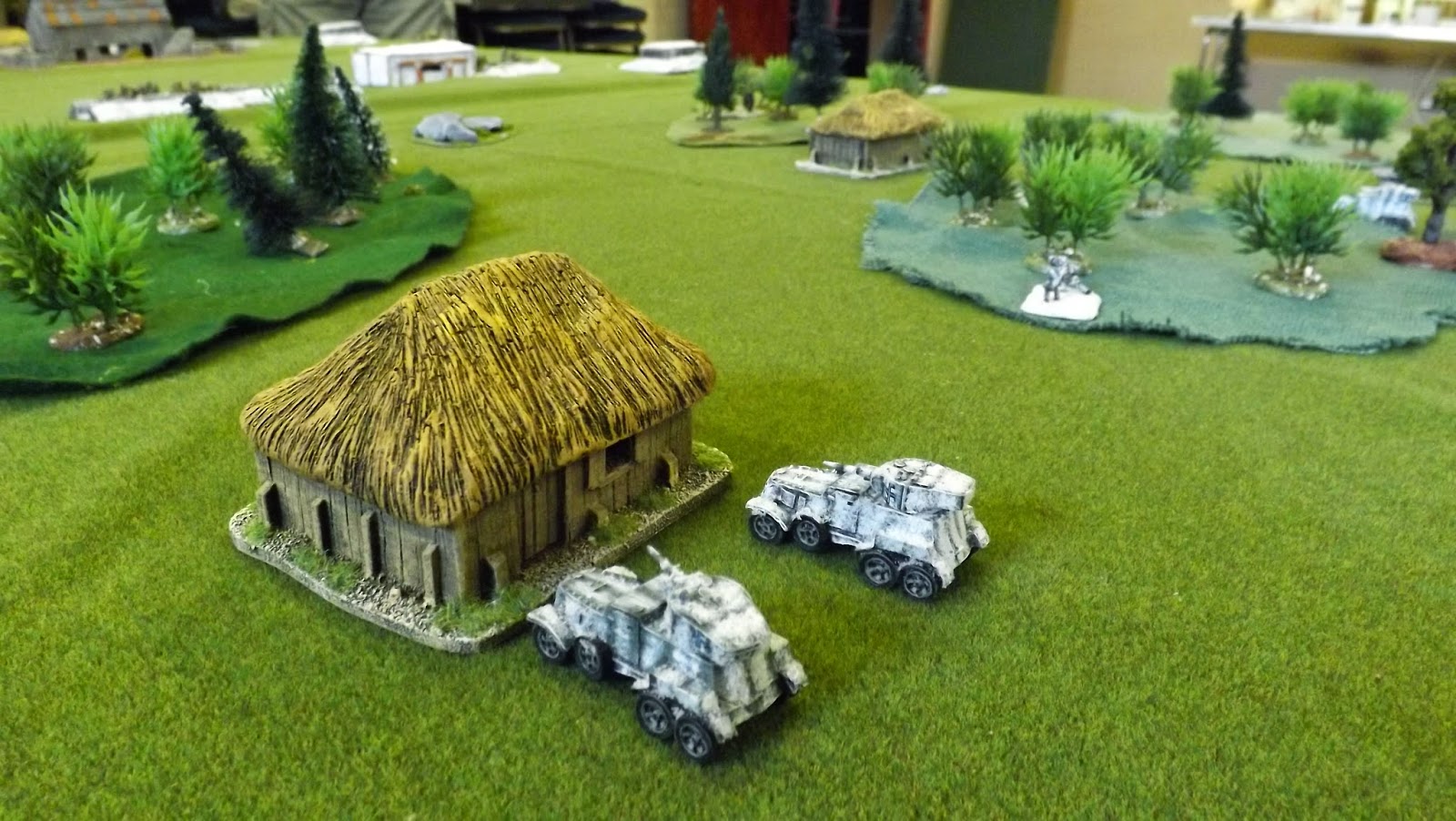 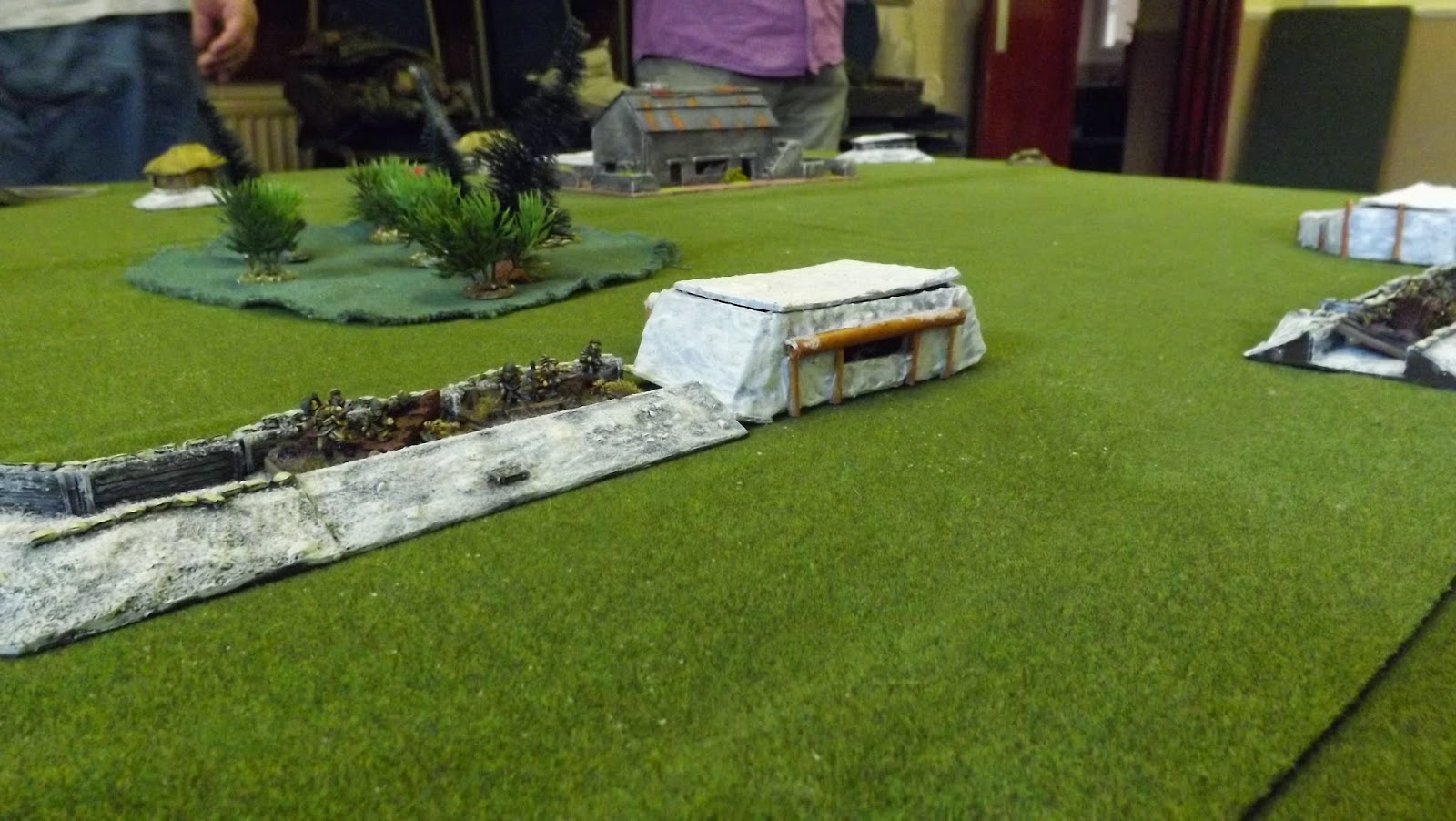 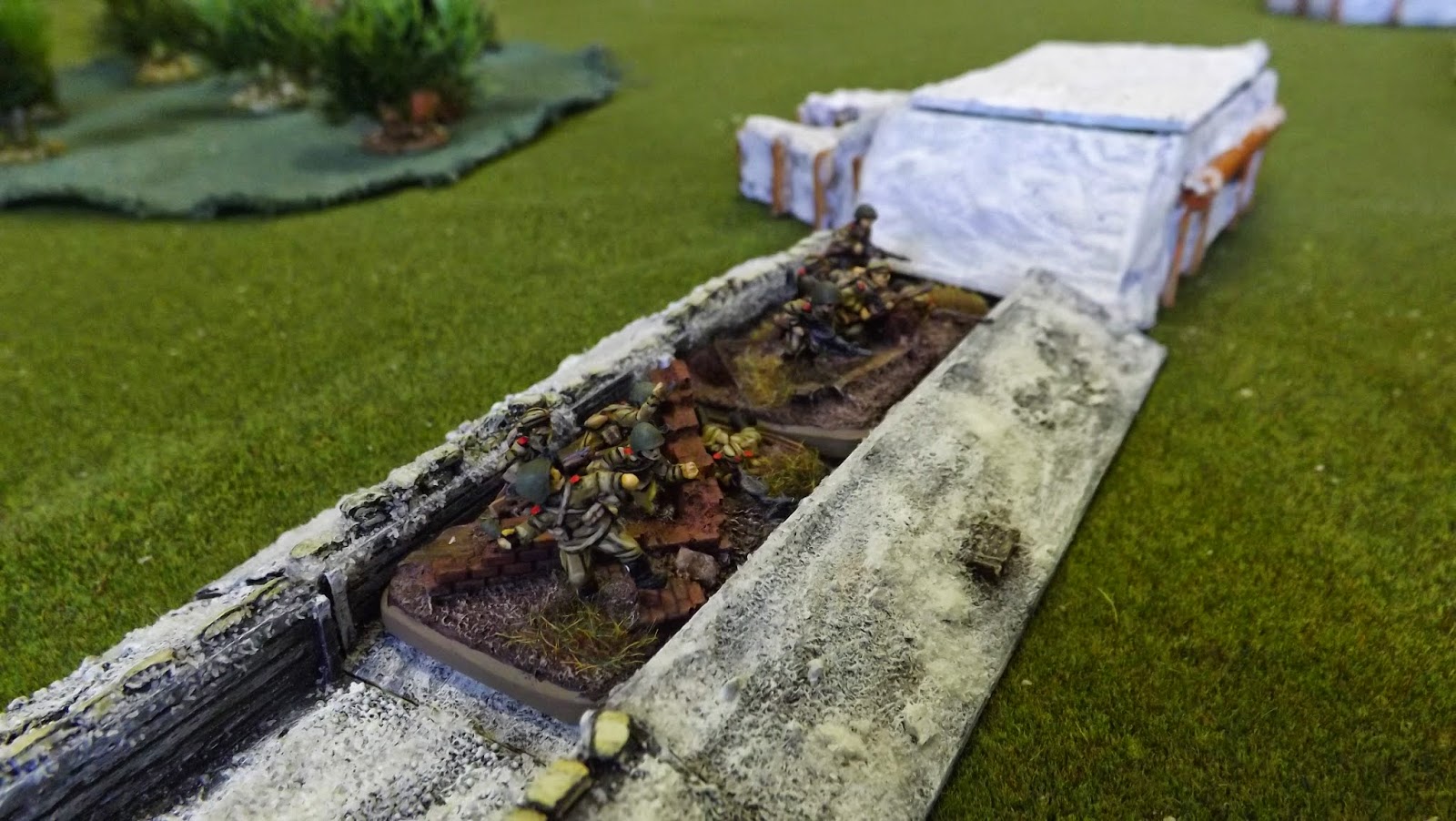 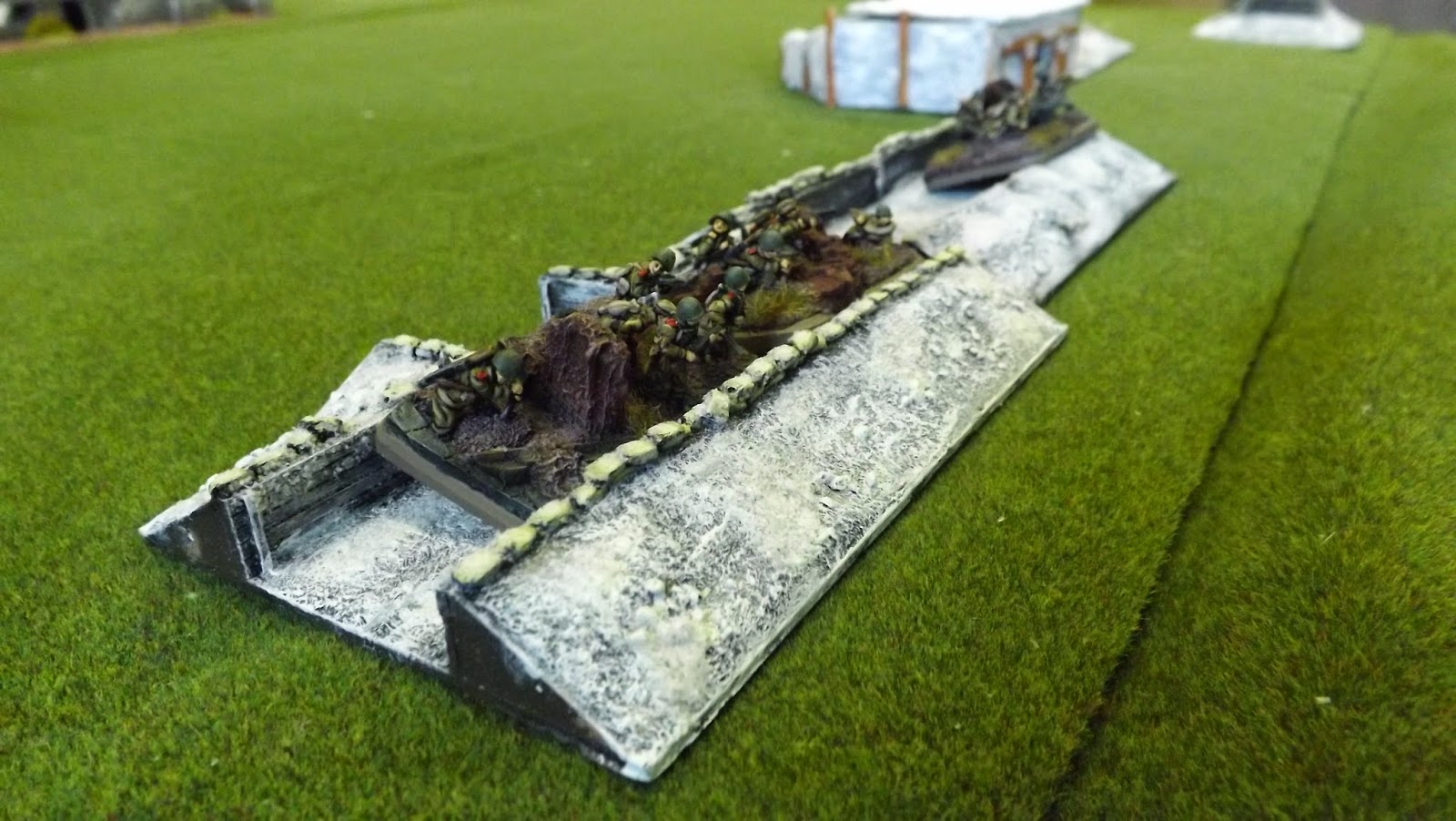 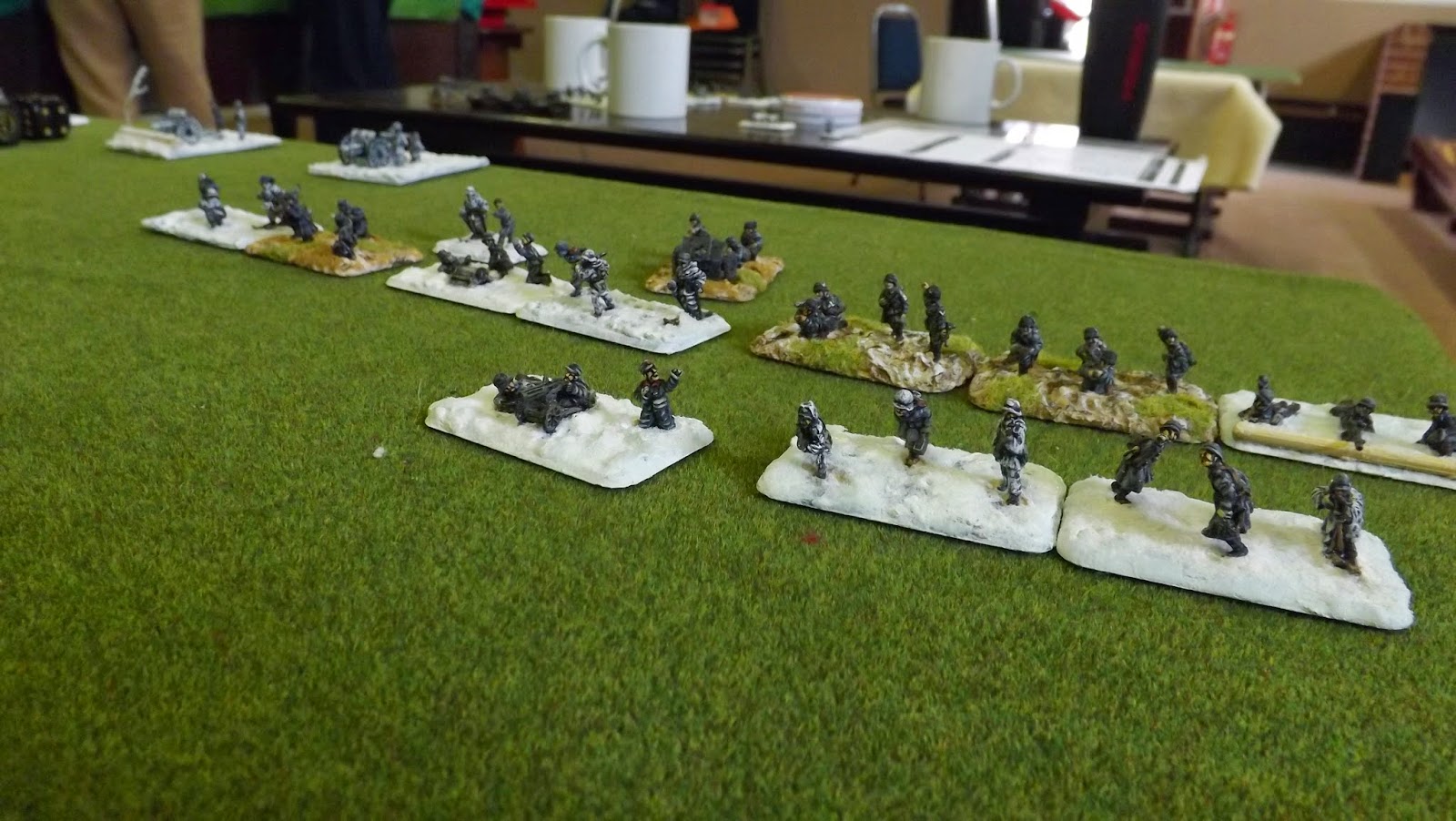 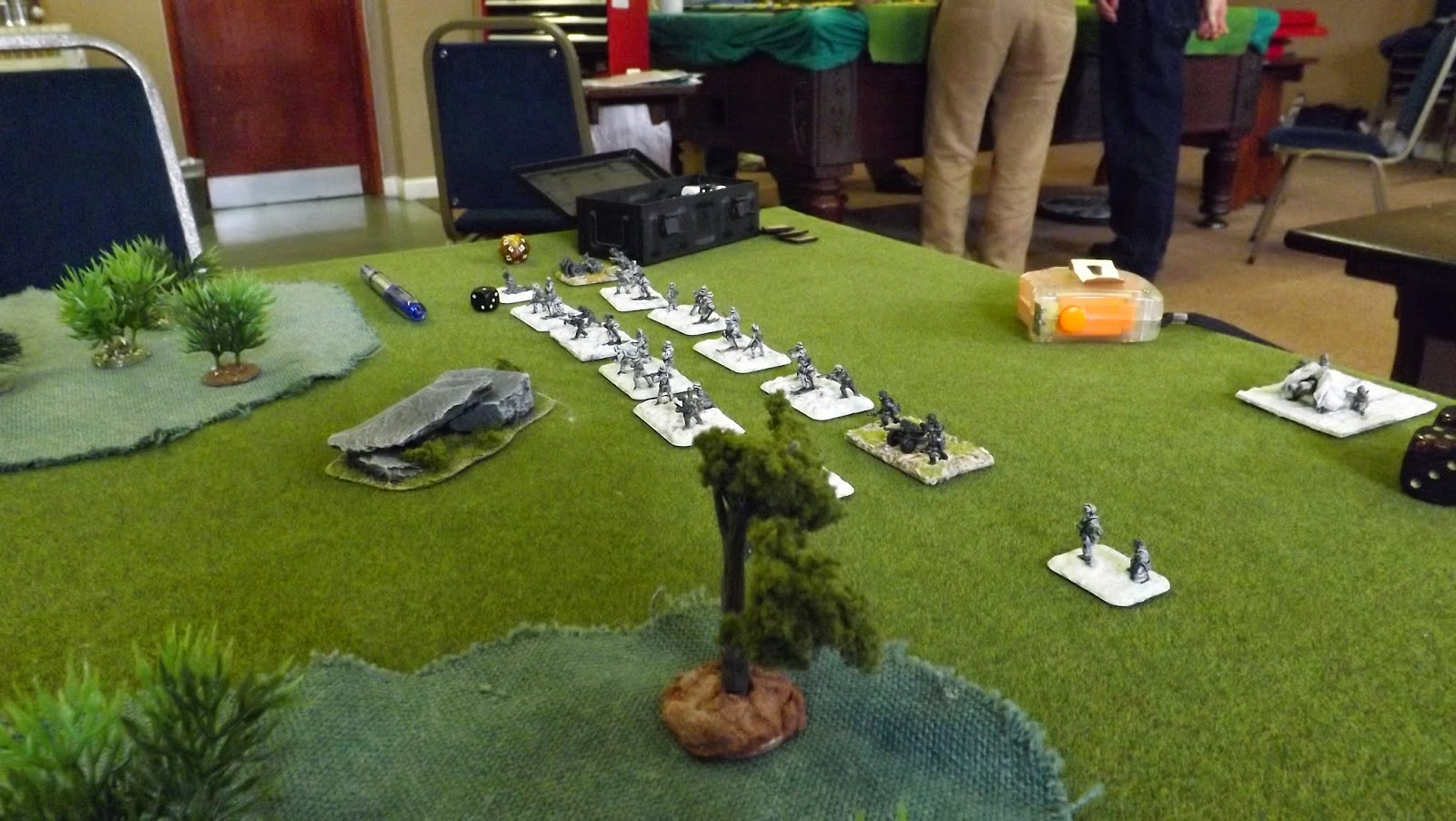 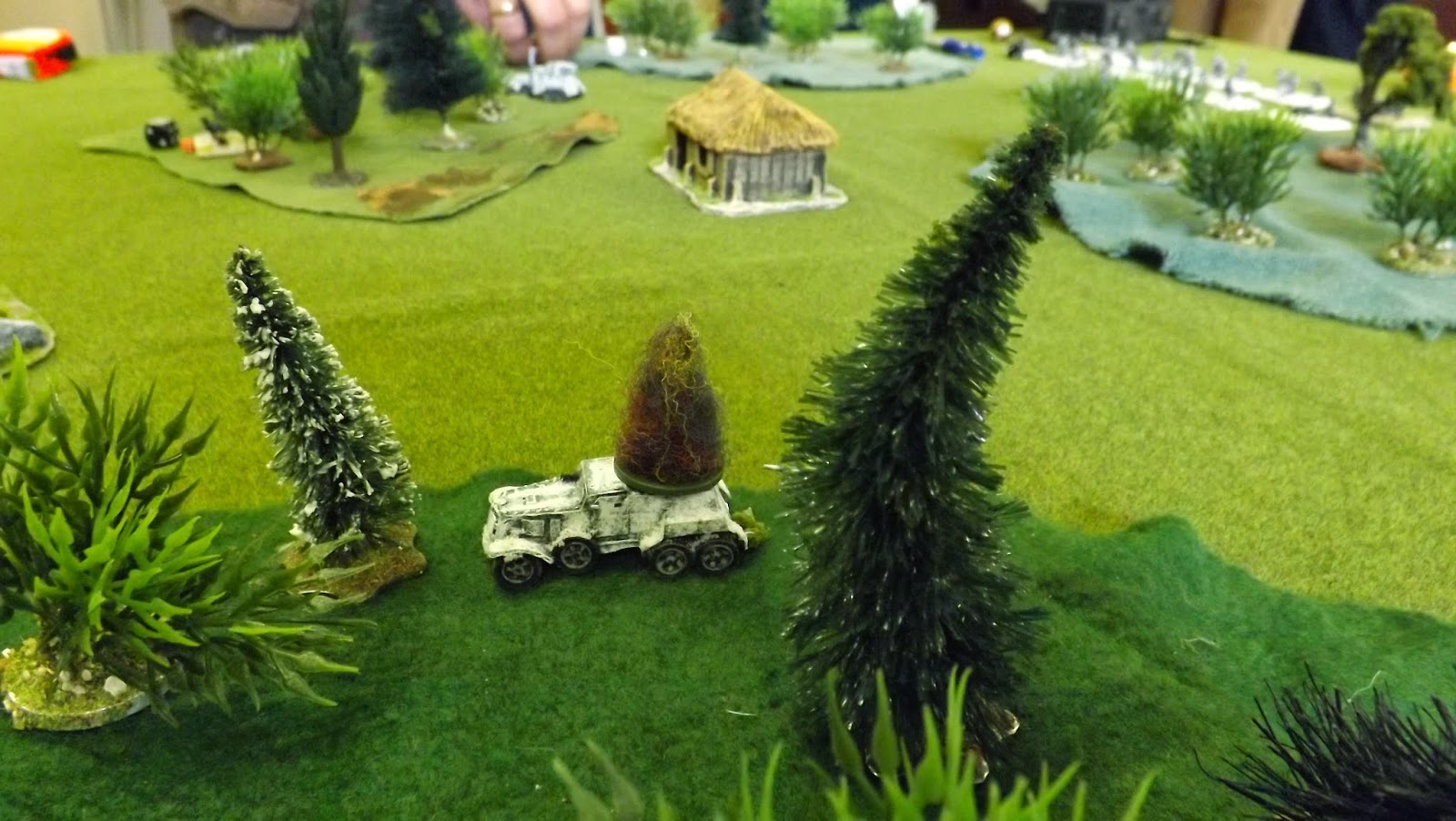 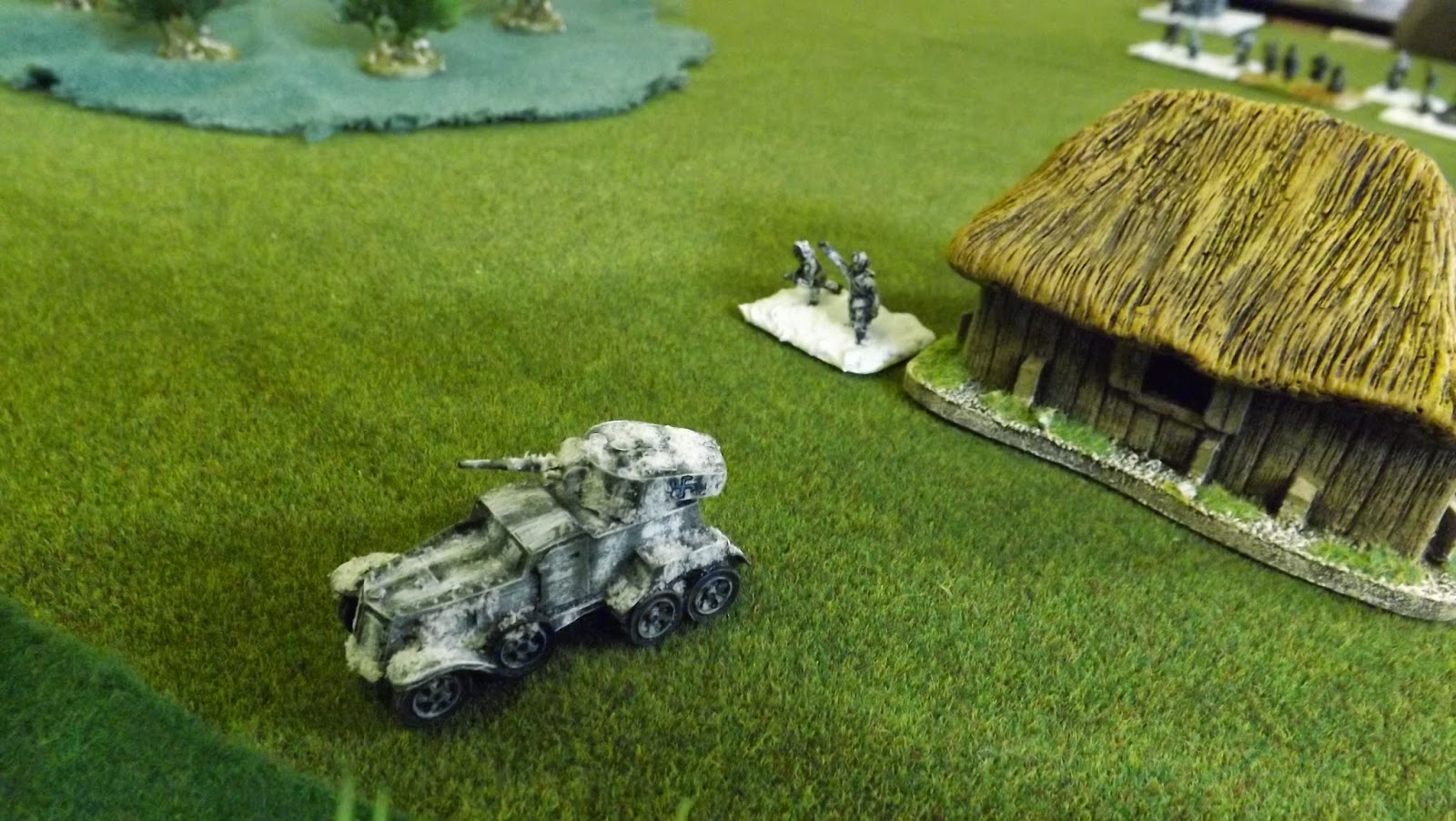 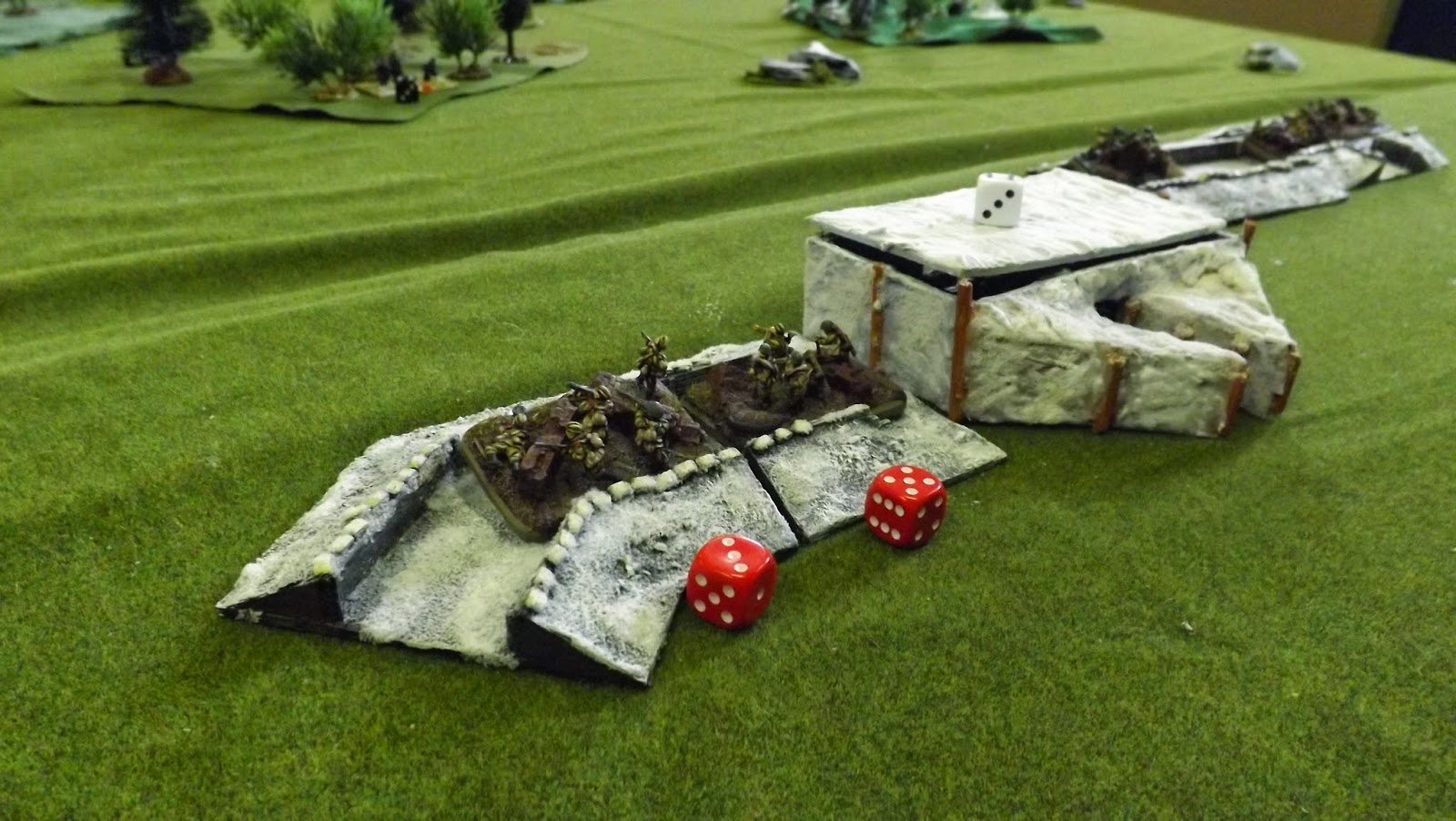 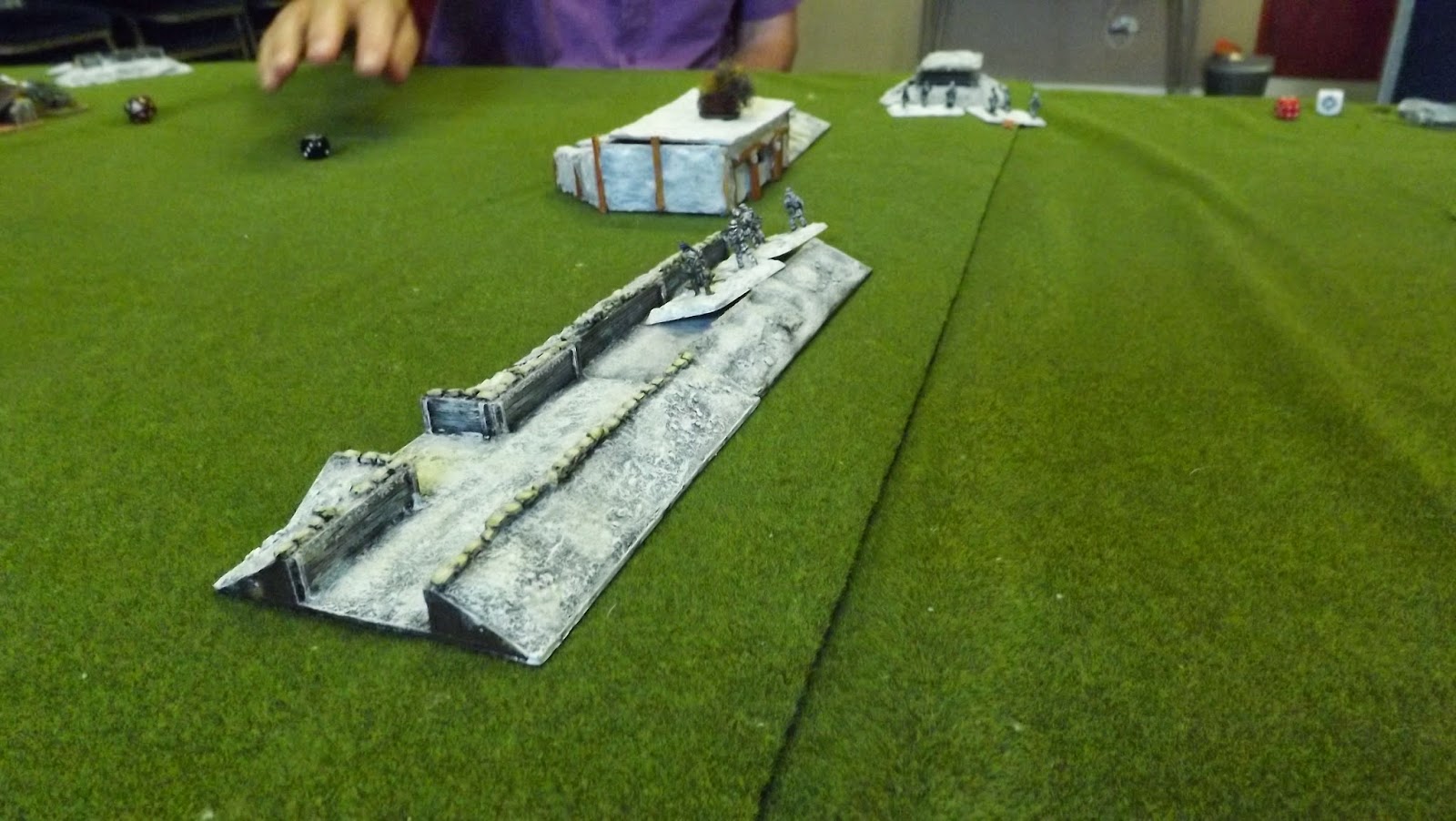 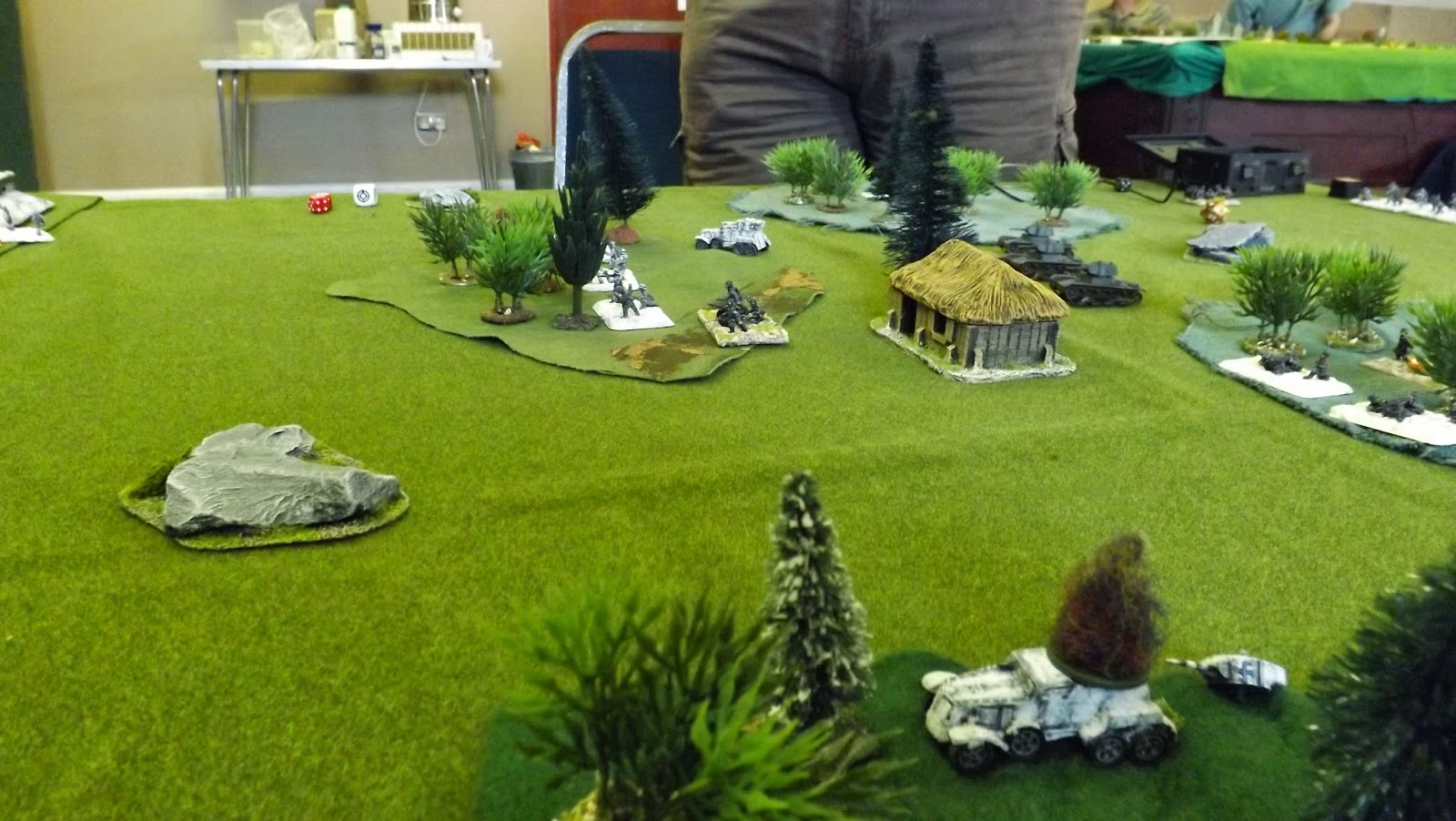 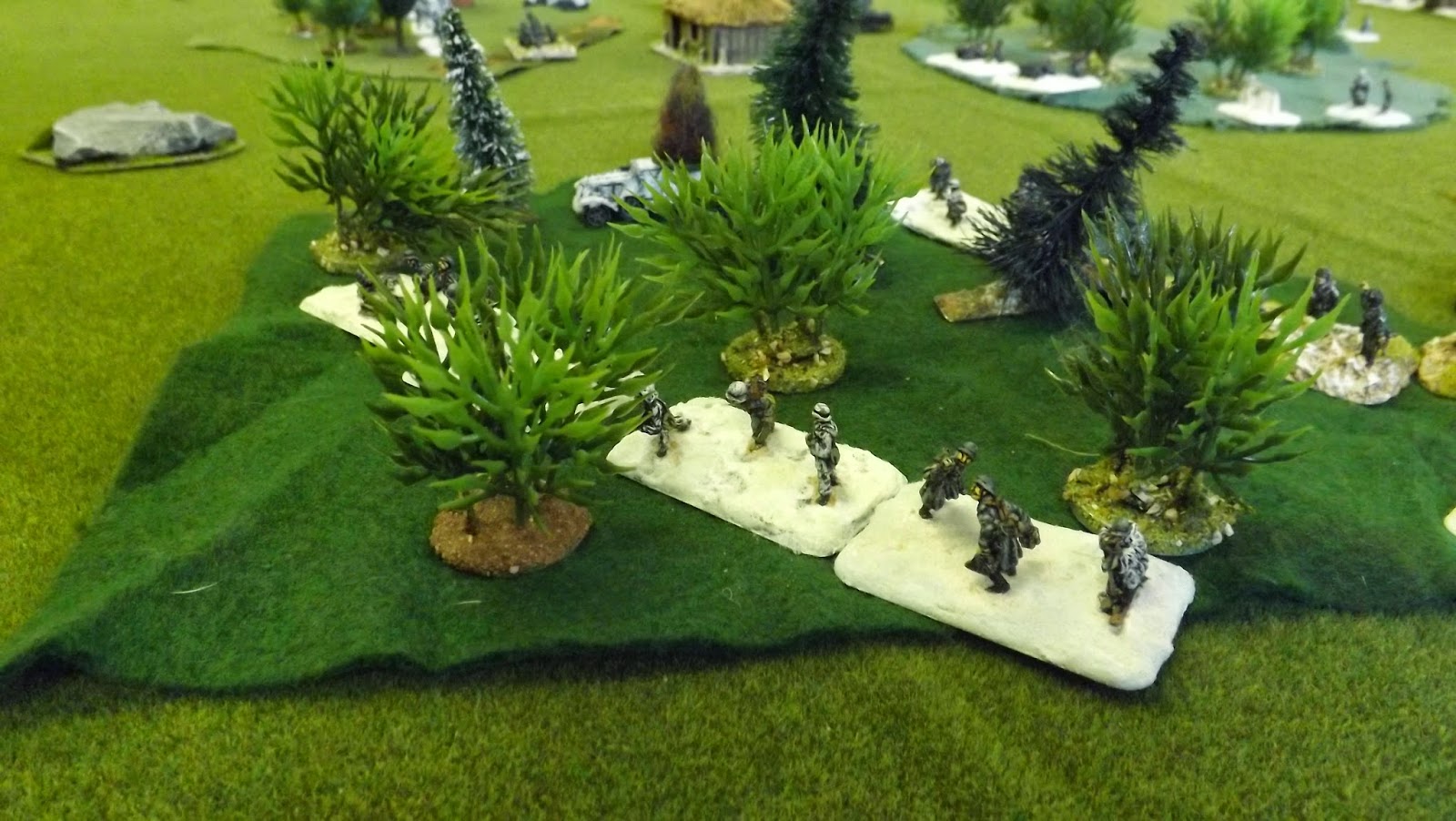 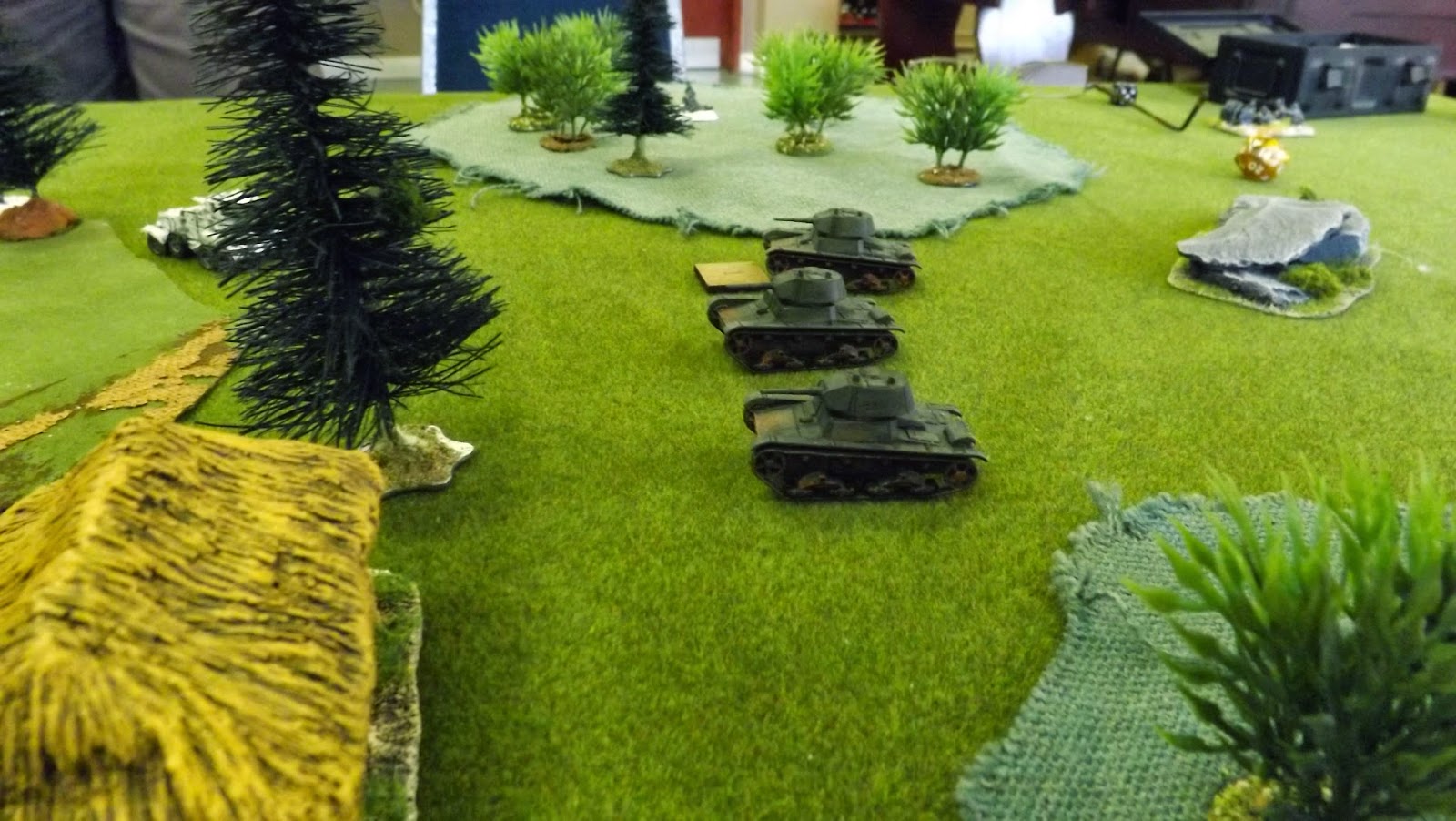 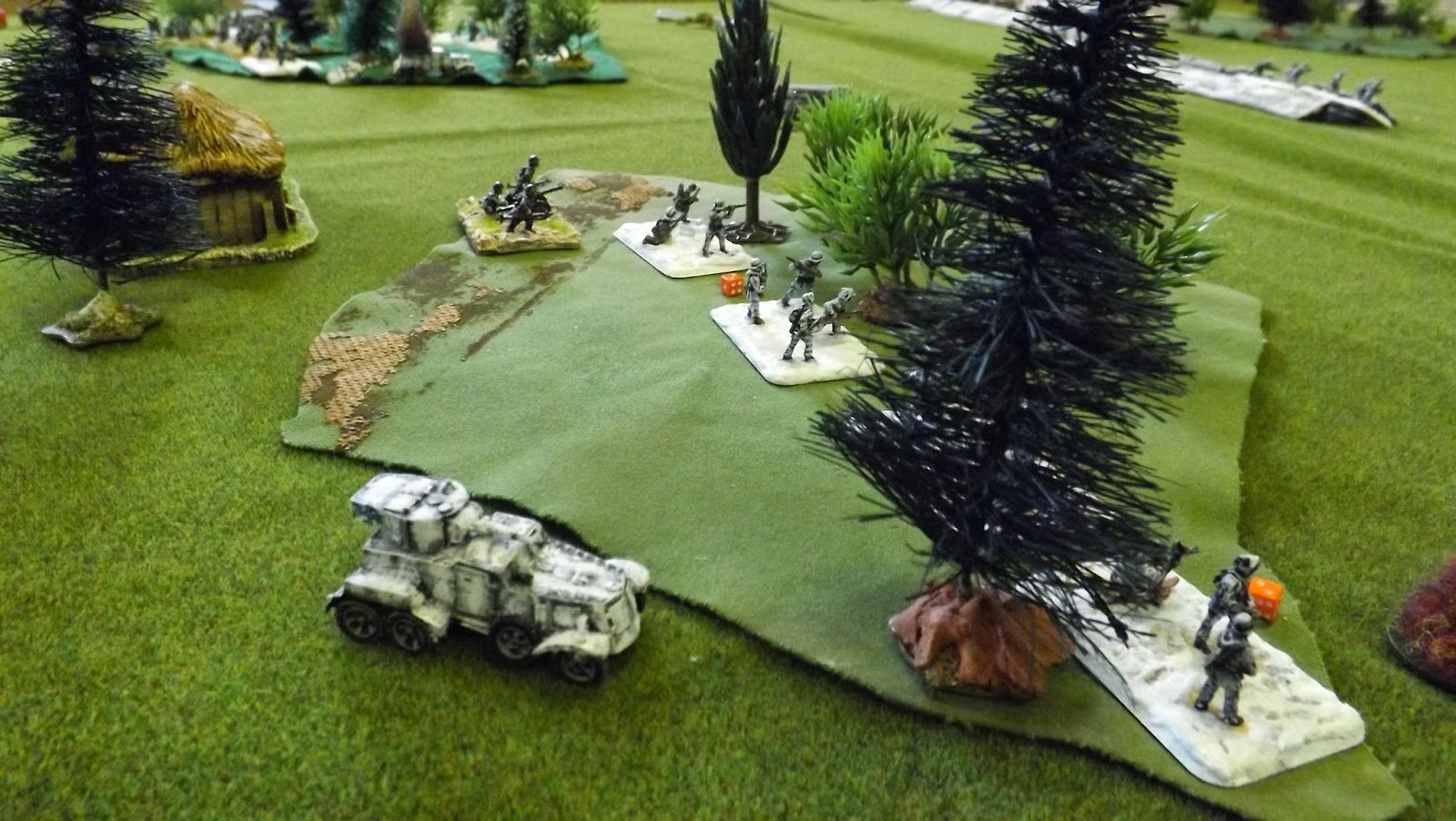 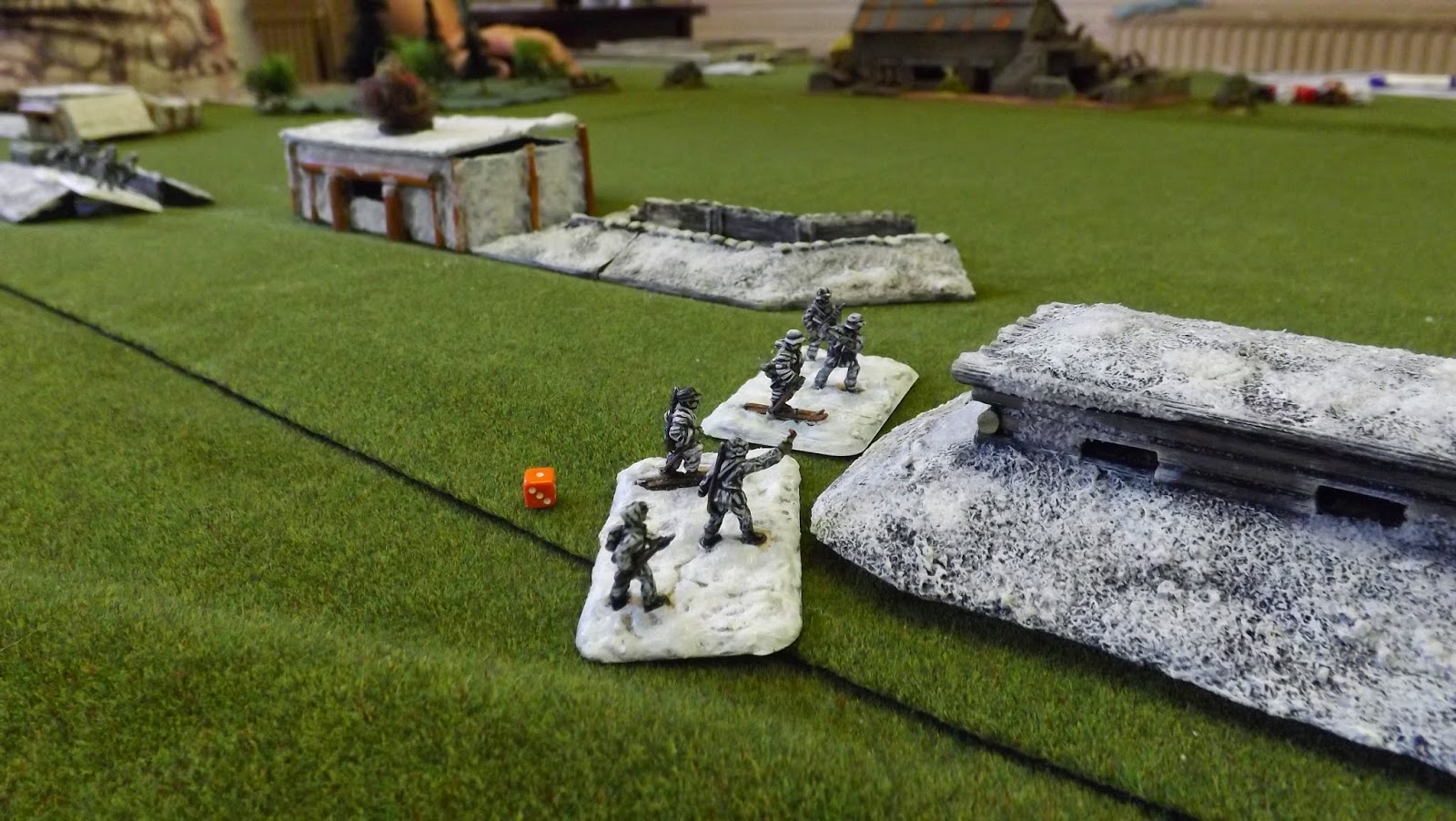 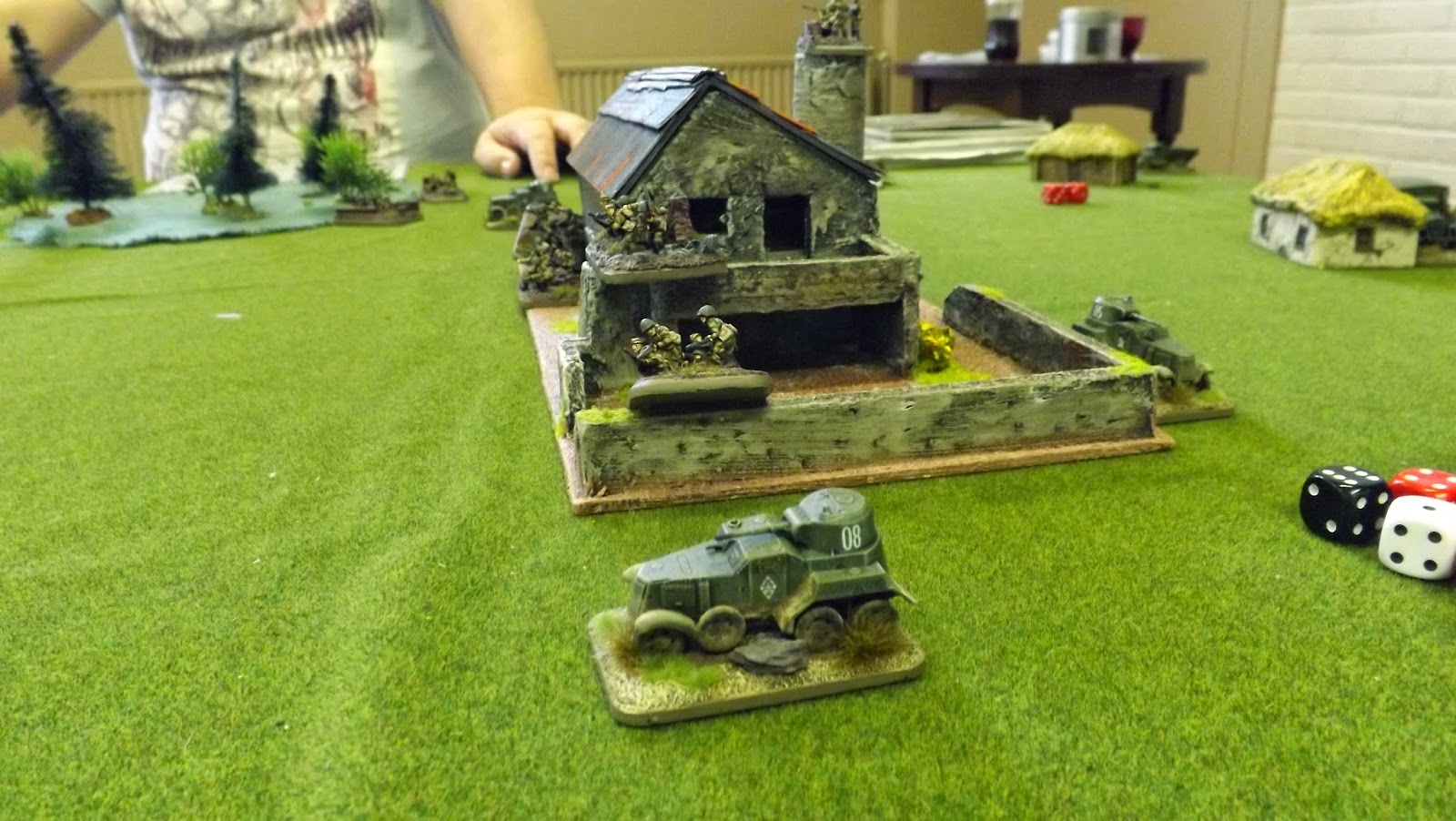