Hellfire and Back, "Dust Up" in North Africa

Last weekend Steve got his desert forces out to try out one of the new missions in FOW's "Hellfire and Back" early war in the Desert book.

The forces pitched British and German forces in a tank on tank shoot out.The force list as below with Steve taking the Panzers and me the Brits.﻿ 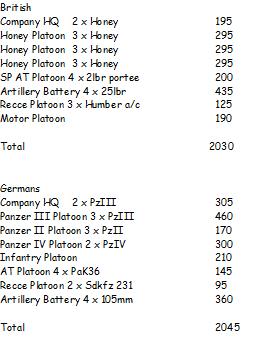 The map shows the terrain, set up of forces, the reinforcement deployment areas and the objective positions. The objectives are "hot" from turn one so are open to a rapid dash, provided they can be held uncontested. At least half the platoons are held as reinforcements entering the table after turn 3. 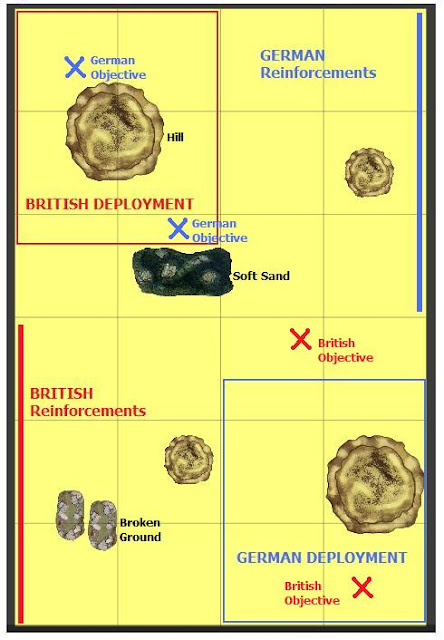 I Chose to lead with my artillery, 2lbr portees, Honey Company HQ and a troop of Honeys. Steve led off with his artillery, Panzer Kompanie HQ, Panzer II platoon and his PaK platoon. However I soon realised the error in my deployment choice when the Germans got their first reinforcements and the British drew a blank. Steve immediately placed his infantry platoon on my flank threatening my gun line as my Honey troop "swanned off " into the desert seeking death or glory, see below. 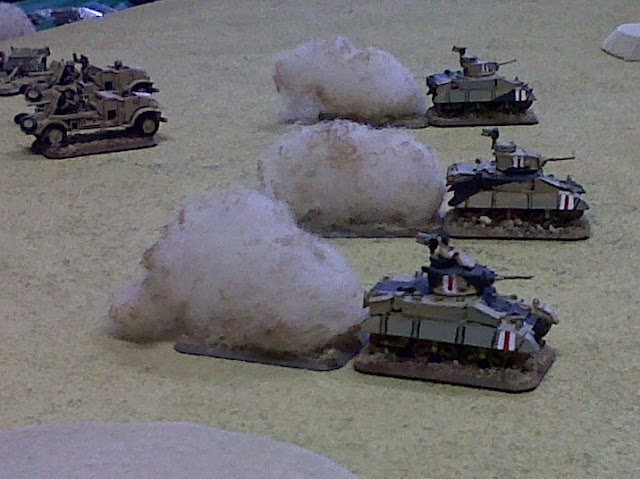 I had however taken the precaution of dismounting my AT guns and digging them in around my artillery position, so this provided them a modicum of cover from the German small arms fire that came their way. My company HQ with their two tanks also enabled some return fire with their machine guns.

In the centre a temporary standoff occurred as Panzer IIs and Honeys eyed each other looking for an opening with the Brits all to aware of the PaK front formed up behind the German armour. I took the unhistorical option of choosing discretion and not wading in. Perhaps Battlefront should have early/mid war British armour having to take a control test when in close proximity to the enemy, to see if they fail to resist charging in, rather akin to British cavalry in the Napoleonic period. 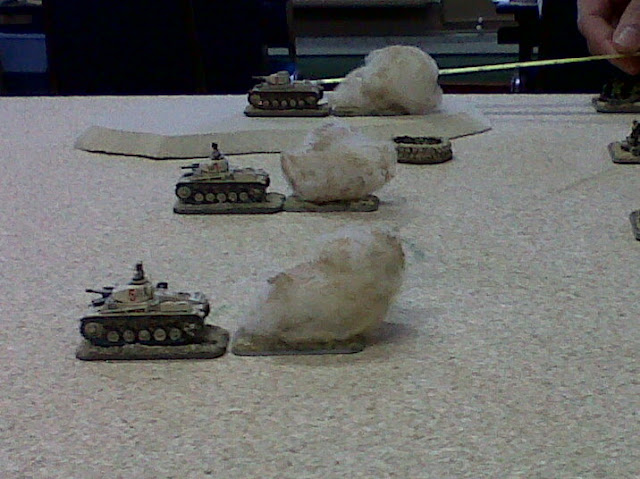 However on turn 5 events took another twist with the reinforcing British armour turning up on the German flank. Now it was Steve's turn to have his gun line threatened. So putting the pedal to the metal, my Honey platoon charged in on the 105's knocking out a gun and forcing another to leave the table in retreat. In addition I was in behind the PaKs and Panzers causing a temporary halt to their advance on the objectives. 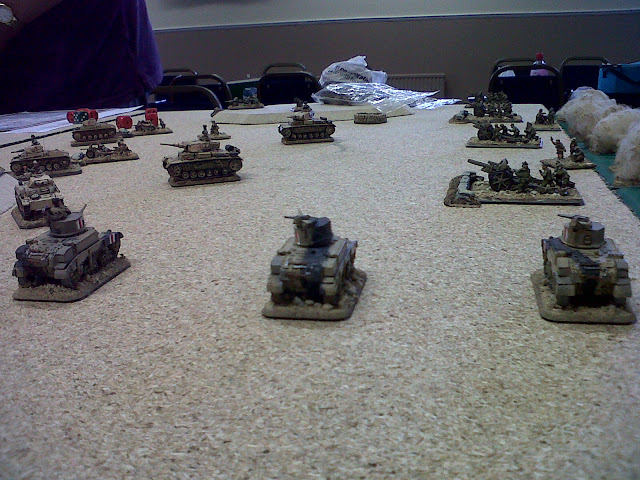 The appearance of the British armour led to a classic tank on tank pell-mell battle with flaming wrecks appearing on both sides. I chose to reinforce this fight with the third Honey troop, ignoring the German armour that was building on my own flank, consisting of the Panzer IIIs and IVs who were jousting with my Company HQ and 2lbr/25lbr gun line. 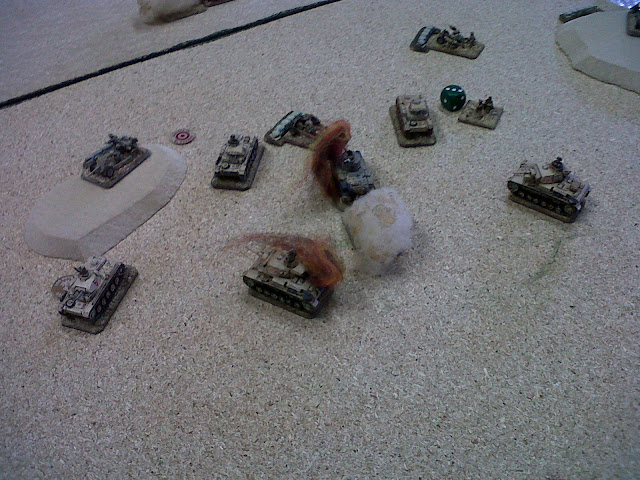 With the game moving into turn seven, events took another twist. The Brits had a remarkable stroke of luck with the 2lbr AT guns knocking out two Panzer IIIs causing the platoon to fail its morale check. This changed the balance in the middle of the table as the other German armour was primarily engaged in dealing with the two Honey troops in their lines. I made a dash in the centre to grab the middle objective with the remaining Honey troop, looking to smoke them off with my artillery to enable them to stay on uncontested.

However it was not to be, the fickle dice gods enabled me to fail to call the guns in on three rolls and with my AT guns failing a morale check and bugging out in turn eight we called it a day. 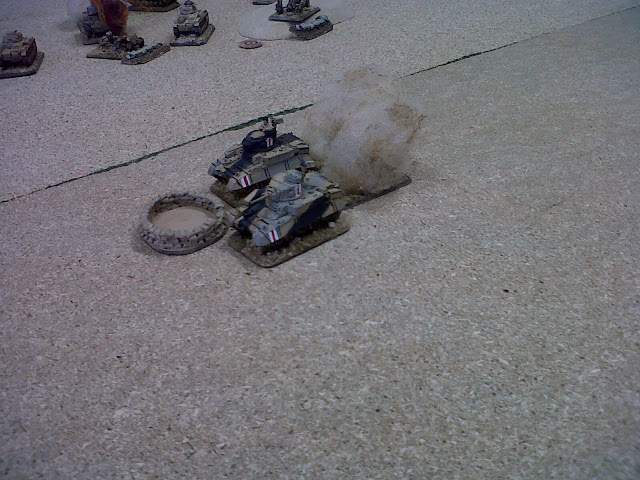 In FOW the mission uses the Fair Fight rule comparing lost platoon counts on the losers column of the Victory Points table, which gave Steve a 2:1 win. The VP points system in FOW is very simple and probably fails to give a good indication of how clear a win was, so I have included an alternative approach which I saw on another blog and have adopted (apologies, I cannot recall where). This looks at the value of units damaged and destroyed to calculate an advantage, which called the game a draw. Either way both Steve and I agreed that this was a very enjoyable mission, and gave us plenty to talk about re set ups and initial troop placement. 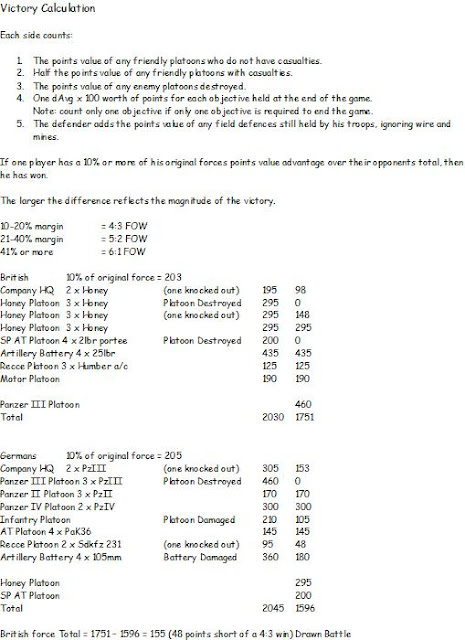 Thanks to Steve for a great game.
Posted by carojon at 11:15 No comments: