The final meeting of the Devon Wargames Group for 2021 took place this weekend with our annual one club big game in memory of a stalwart of the club and a very fine chap Gus Murchie, with last year's game sadly cancelled due to Covid restrictions, and so it was great to get back to our usual club business.
This year's theme was to be WWII and set in Normandy recreating one of the big set piece British breakout offensives that came to characterise much of the campaign as the Allies fought hard to drive the Germans back from the Normandy beachheads.
With plans finalised in October following our Club AGM, our planning team, Chas and Jason, issued an alert order with the the briefing that follows and the club geared itself up for the big show!

This years game will simulate a British attempt to breakout from Normandy.
The game will cover several days of fighting, the initial British attack and the German counter attack.
British objective is to capture game table 4, German HQ, after fighting their way across Tables 1,2 and 3. German objective is of course to prevent the Brits achieving objective but to also take back tables 1,2 and 3.
In addition to the table top gaming, this game will introduce the the concept of resources. Resource Points enable players to move and do things, they should be considered to be fuel, ammo, organisation, communications etc. As in real life there will not be enough resources to do everything so it is up to the commander to work out priorities.

The game is split into two phases, Day and Night.
The Day Phase consists of six turns, Night Phase only one turn.
The Day Turns are made up as follows:-
End of Turn
The Night Phase is used to reorganise forces for next days fighting.
The following is undertaken:- 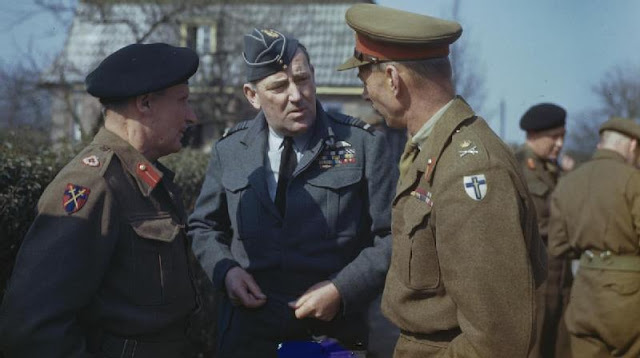 Each player is allocated a command:-
HQ Commander. In charge of everything, they allocate “Resource Points”, allocate support units, tell other commander what they are to do, remove commanders who don't come up to mark.
ADC. He is the HQ Commanders eye's and ears he can also be sent in to take over command of tables or units.
Artillery Commander. Allocated tables for batteries to fire at. Will move to table during combats to throw dice etc.
Air force Commander. Allocated tables and operation for each aircraft. Will take aircraft to table and conduct attacks.
Battalion/Regimental Commanders. These are on the sharp end of the fighting. They are allocated a force and table. They are given orders and told to get on with it, while the HQ sit back drink coffee and eat goodies. 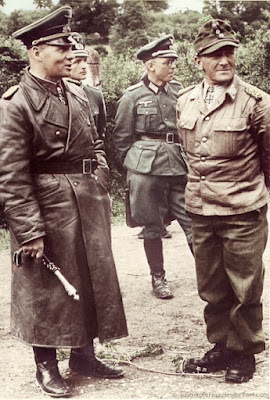 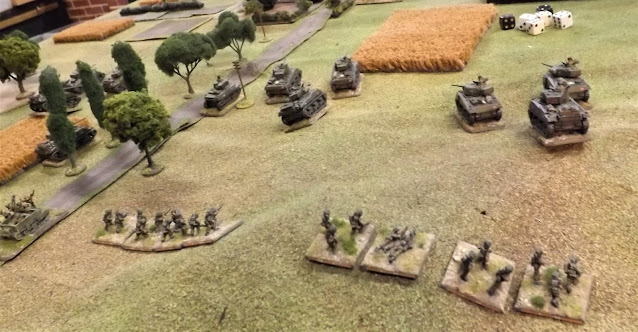 As one of the cogs in the Allied war machine taking the roll of a forward British infantry battalion commanding officer I was very much involved in the little battle that formed our small part of the big picture out on the extreme Allied left with Jack joining me to command the British Armoured Regiment that was in support and Oberst Paul, hunkering down amid hedgerows and orchards as his Grenadier Regiment prepared to resist our assault.

Our table was a length way affair with more of the open terrain around Caen covered in ripe cornfields and the occasional orchard, perfect 'tank country' as dad would have called it, and so Jack took the lead with his sabre squadrons forward ready to shoot my infantry lads on to the target, namely the village which was our Phase One objective, before pressing on with Phase Two to break out off the far end in support of the final push into the German rear area.

As our little battle developed, I donned my other cap as the I Corps official frontline photographer and jumping in the handy little Auster Army Co-Op light plane made available to me to whisk me swiftly to all sectors of the front I made my way around the other tables to give the folks back home an idea of how their boys were doing in France. 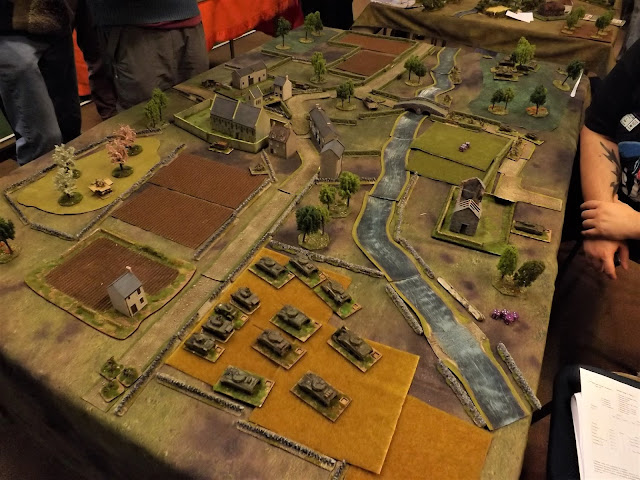 The table next to ours being fought width-wise was more of a  'knife fight' affair with both opposing sides close up and personal from the get-go with a German minefield blocking the river bridge on the road leading to the village ahead, guarded by a knocked out panther tank from a previous attempt to take this sector.

My pilot was happy to take a detour behind our lines and land close by Corps HQ where I was warmly greeted by the general's staff officer and invited to stay for lunch before seeing the general (Steve M.) at work fighting his battle and meeting the Air Officer Commanding (Si) in charge of the liberal amounts of Allied air support backing this particular offensive. 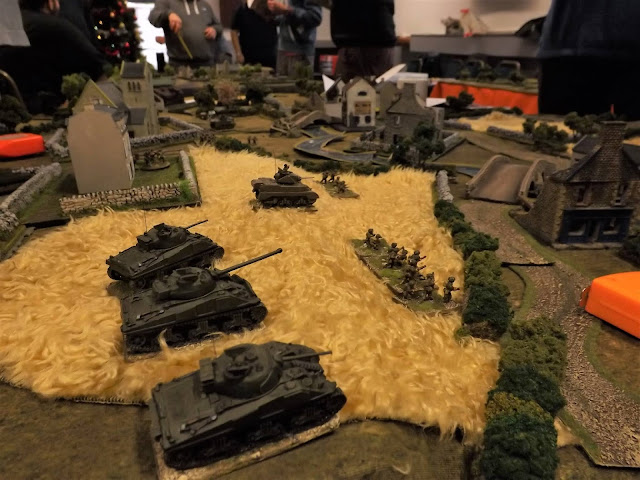 After lunch in the rear we were back in the air heading further into the middle sector and the German rear areas, the objective for the attack, deceptively quiet as the enemy below were careful not to reveal their positions to our view and any foolhardy attempts to take a pot shot at our inspection likely to be warmly met with a response from our Typhoon escort followed by some Royal Artillery medium and heavy howitzer support.

The right flank of the battle proved to be a real treat, going over ground very familiar to anyone who had the pleasure of playing Gus at perhaps his favourite period, Normandy WWII, and here with Nathan setting up Gus's old prepared boards and with models very familiar to me having painted and played with them before selling them on to Nathan. It's really great when collections stay with the club and we are lucky in that fact.
As on the left flank the right flank was a lengthways German defence in depth table but obviously closer to the American sector with more hedgerows lining the fields in this part of the French countryside likely to be lined with well dug in German defenders as seemed to be the case when we arrived. 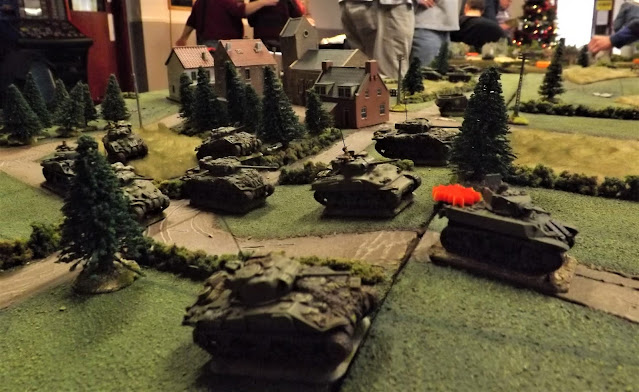 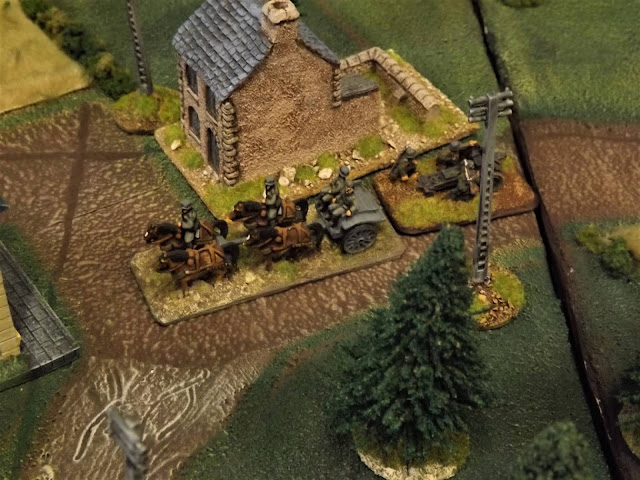 It was the afternoon of day one as I returned to my comrades on the British left with our armour hotly engaged with German infantry in and around the village, dropping the occasional mortar 'stonk' among our tanks as Allied close air support zoomed in overhead to bomb and strafe the village.

On all the tables the pressure appeared to be taking a toll on the dogged German defences and the inevitable closely conserved assets started to appear to shore the situation up with the odd Tiger tank being spotted and warnings called out over the radio net - of course every enemy tank is a Tiger! 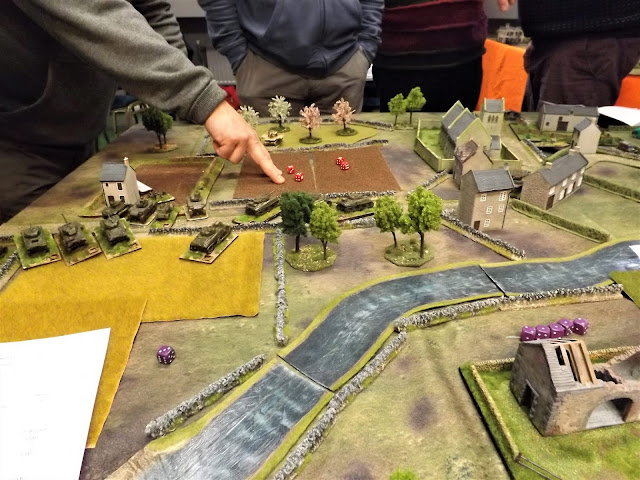 When heavy armoured assets weren't available German commanders had to eke out their situation by resorting to close defence from their panzerfaust and panzerschreck teams backed up with the regimental Pak 40's. 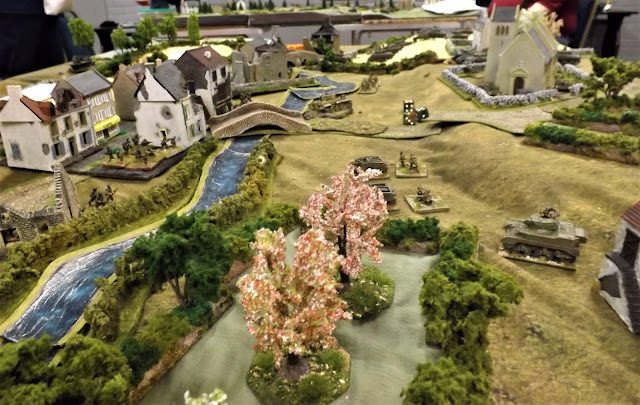 Any stiff resistance was met with calls back to Corps with a visit from the AOC and Corps RA in the form of Si who was having a great time wheeling out his big guns and fighter bombers eagerly checking back with the sector commanders whom he had lavished with his largess to establish the results which seemed to be having the desired effect, as German defences started to buckle. 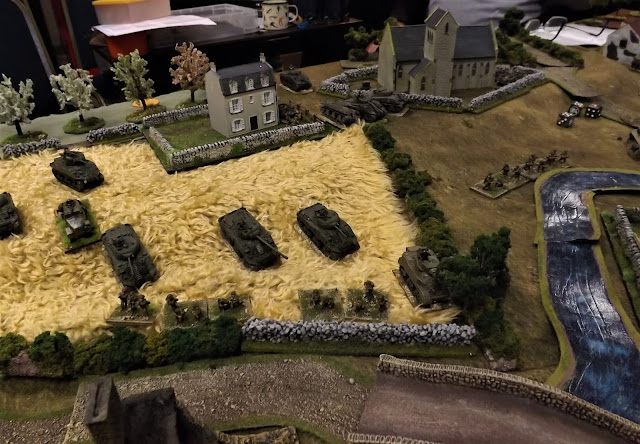 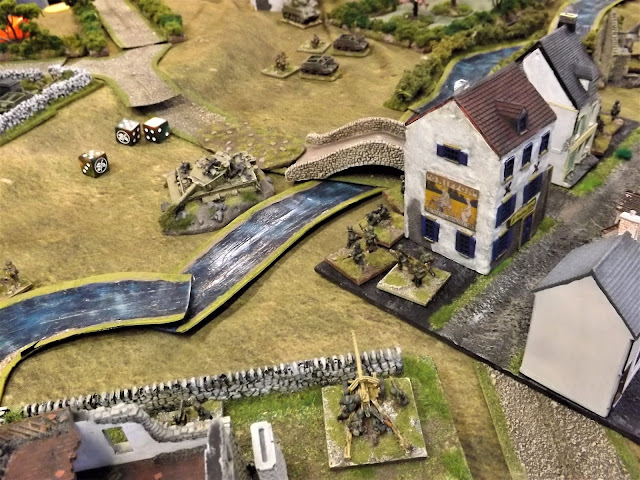 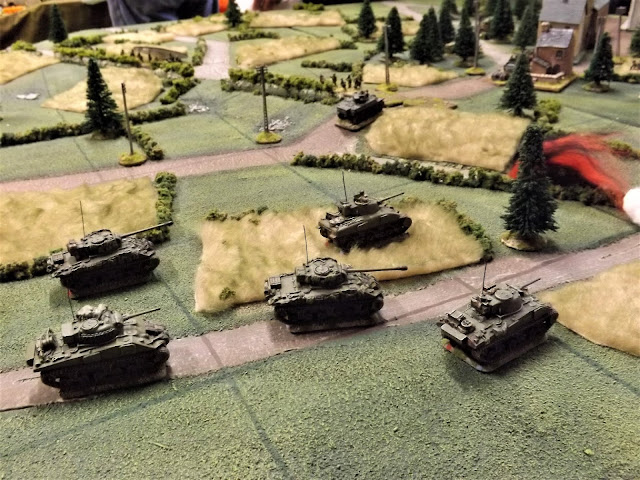 Our game turns were under strict timing and the pressure was on for all field commanders, German and British to get on with their selected moves before the dreaded air raid warning siren announced the end of the turn and to stop what you were doing as the turn was handed to the opponents.
Needless to say Turn Six was reached in good time and both sides had a chance to regroup in preparation for the return of day light and battle. This took the form of withdrawing damaged tanks into reserve and following an announcement of a successful opportunity die roll the chance to bring back knocked out and damaged tanks and lost infantry bases. 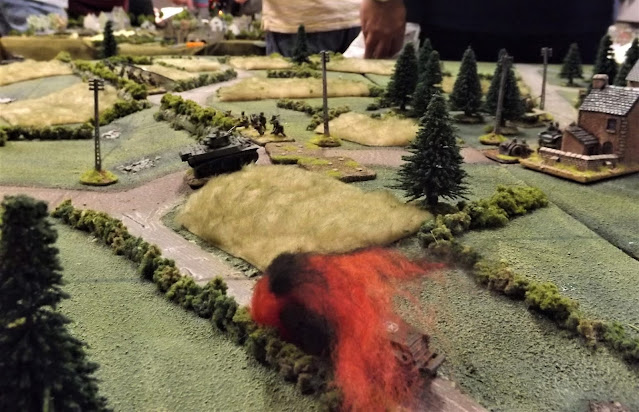 Sadly on our sector we only got the chance to resurrect our three tank losses, only managing to reclaim one of the damaged tanks, but with our two destroyed tanks, one infantry base and the carrier platoon base lost to us for the resumption. 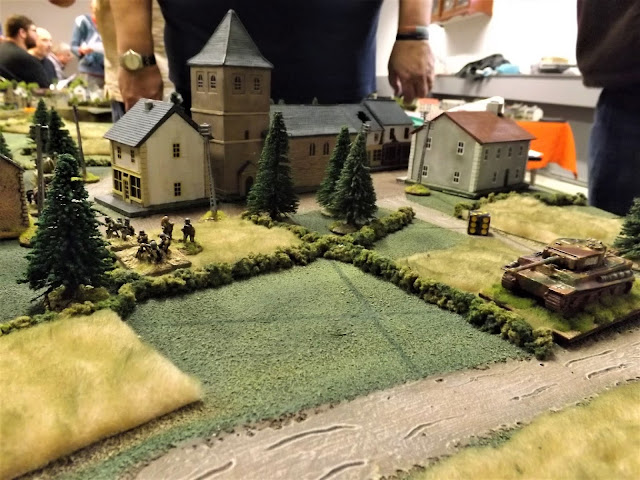 Paul managed to secure the support of a Panzer IV battalion on our sector just as his rear area infantry support units were fending off the irresistible approach of our tanks.
Our advance was now up on the village and so the battle was being fought to stop our breakout beyond and the troops Fireflies came into their own, deftly sniping at hull down Panzer IVs with their long 17-pounders on the slope beyond, only to see the German tank line devastated by a Typhoon attack that left the road into the German rear wide open. 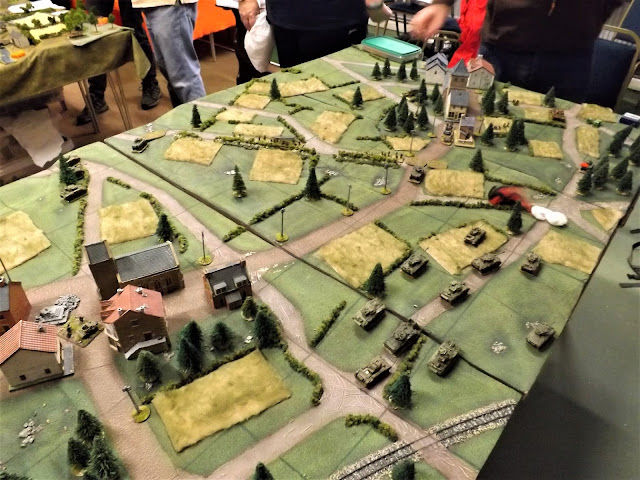 However things had progressed more quickly in the centre and the British spearhead was ahead of our flank with their lead elements composed of an Armoured Reconnaissance Squadron of Cromwell tanks probing forward on the German rear table as our game came to a close. 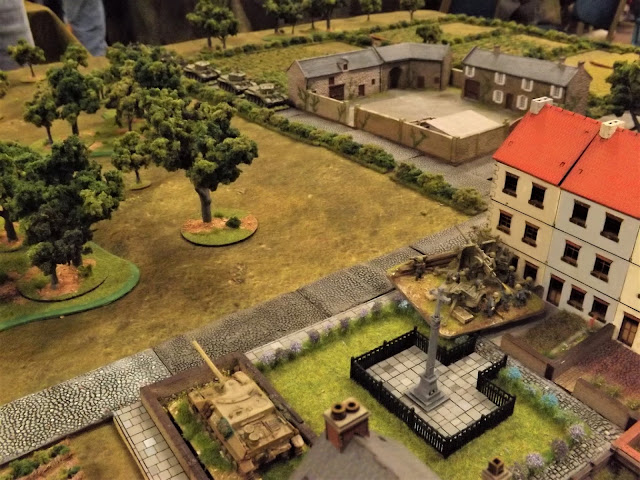 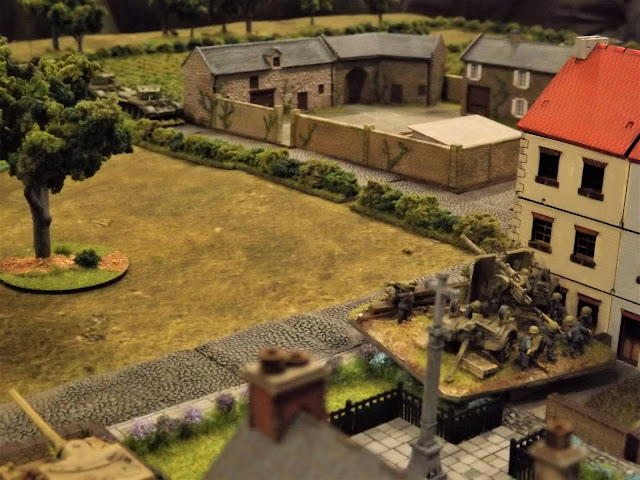 As you can see the club pulled out all the stops on this game with multiple collections of 15mm WWII being brought together to create our end of year celebration.
As always the game was played in a great spirit with everyone determined to make the occasion fun for all involved and with the outcome very much not the focus of all the effort. 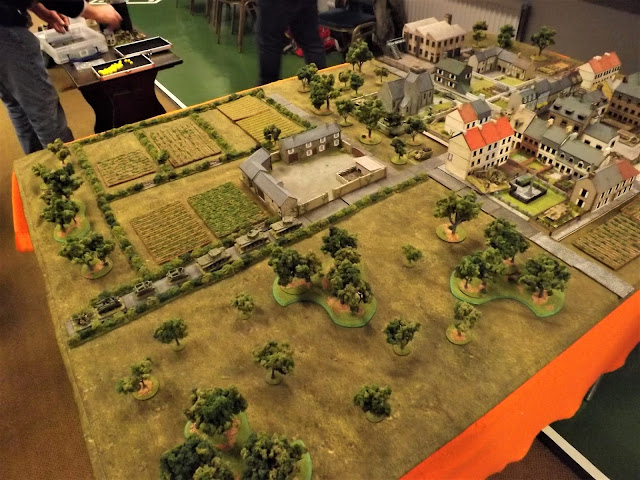 I hope those who have followed the club's reduced calendar of games this year have enjoyed the output as much as we have playing the games presented.
Devon Wargames Group, like the wider hobby, has shown it's resilience in the face of the pandemic and there is a feeling of a gradual return to normality with members feeling encouraged to plan bigger and better games in the New Year and to welcome new members who are interested in playing historical wargames and enjoying the social side of gaming with a club.
On behalf of the DWG I would like to wish everyone a very happy and peaceful Christmas and a great 2022.
Cheers
JJ
Posted by carojon at 17:45