Hi all,
Steve and I fought the third game in this six game linked campaign, adapted from the Skirmish Campaign book, "Heroes of Omaha and Panzer Lehr". The first three games are fought over the same table simulating the fighting that went up and down the road from Les Hauts Vents (see the google map, bottom right, on the campaign summary sheet)on 10th & 11th of July.
This third game simulates the counter attack by US 3rd Armoured Division to take Hill 91 and Les Hauts Vents and roll back the advance of Panzer Lehr's right thrust. The map below shows the US and German front lines prior to this action, with the hill top shown on the southern edge. 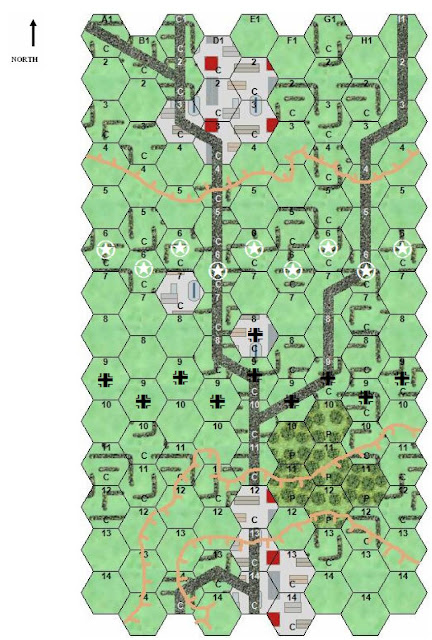 The picture of the table shows the set up after the troops were deployed, the variable set up being that because Steve's Panzers won the last encounter, his defences could include the house in the centre of his front line. As can be seen the Panzergrenadiers occupied the front line backed up by the Panzer platoon and Company HQ with the HMG section.
The terrain in this action was not conducive to armoured attacks, with plenty of bocage, limited roads and rain sodden fields which would cause wheeled vehicles to check for bogging. This together with occasional minefields left blocking gateways from the previous two battles severely limited my US troop deployment. Thus the tanks went into the fields, with the armoured infantry moving on my right where unimpeded gateways allowed access to the half tracks, with some tanks, the HMGs and recon advancing down the road.
I was also hoping the US artillery would lend a hand so had my Sherman OP and Company commander on the hill to my rear able to spot for my guns. The only hazard with this plan was that historically the artillery was inaccurate on the day, and to reflect this problem Steve got to place two alternate positions for the strike, which would fall on my positions should I roll a 1 or 2 on a d6!!!! 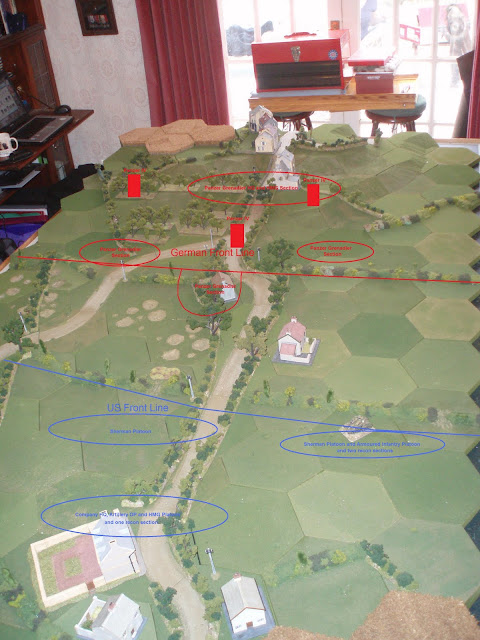 The US force looked well balanced with all arms capability and plenty of recon. 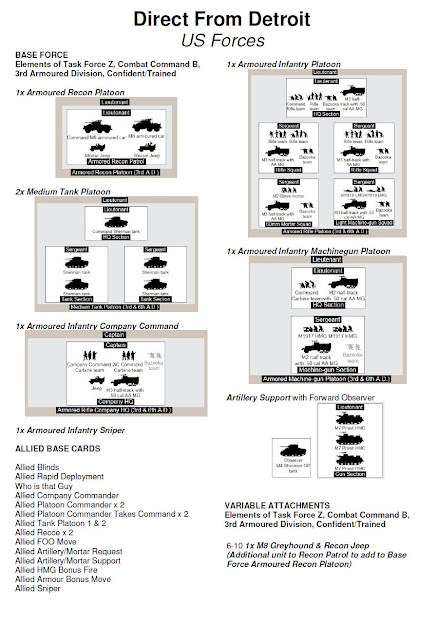 The German force although small in comparison to the Americans was formidable with Veteran morale, dug in, plenty of Panzerschecks and Panzer IVs sitting still on the defence able to blaze away at my advancing armour. Also they could rely on a PaK40 taking pot shots at any US vehicle in fields on the US left flank with an open edge. This simulated 352nd Infantry Division on Panzer Lehr's right flank. 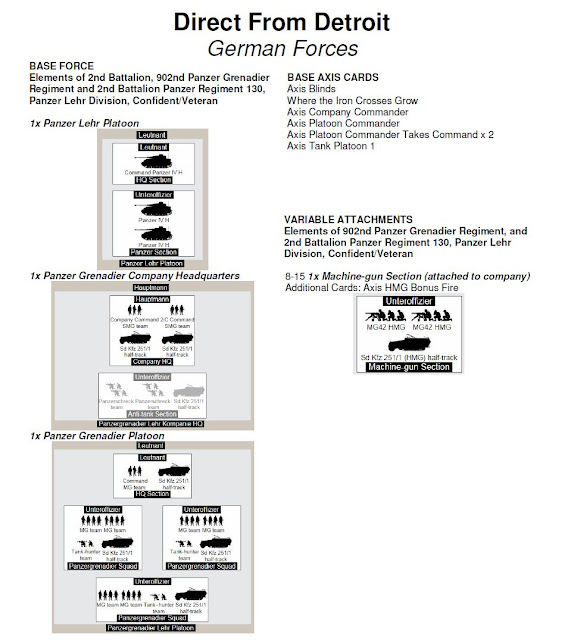 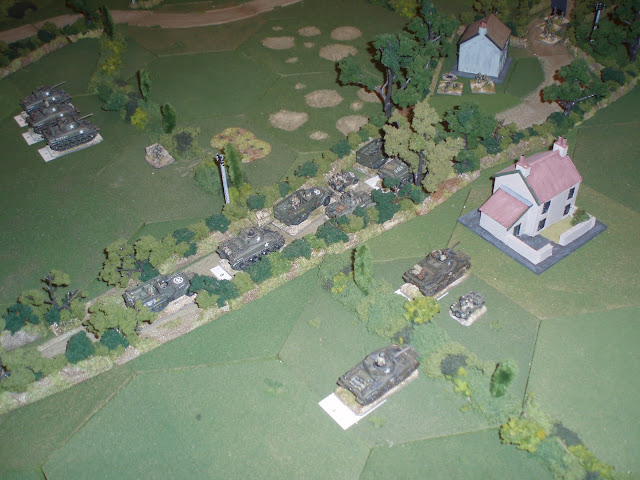 The recon boys did an excellent job revealing two Panzergrenadier sections and allowing me to quickly bring HE and HMG fire to bear, causing a few casualties and pinning their positions. 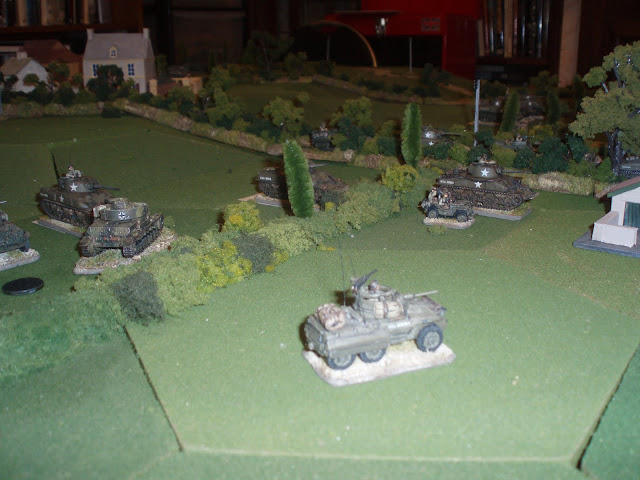 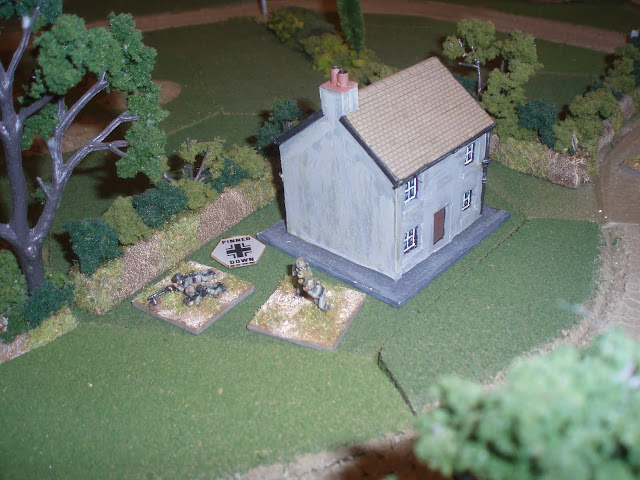 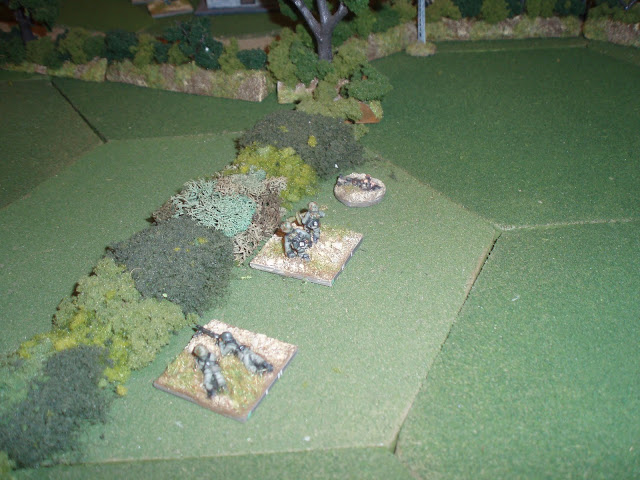 This initial combat was successful beyond the American expectations as the mission checks this caused the Lehr grenadier platoon to take saw Steve throw two ones and a two on a d10 in the first couple of moves (low being not good). The grenadiers panicked and left the position. The road looked open for the taking. That's when the wheels started to come off the US attack!
The picture below helps illustrate the point. My Shermans looking to take advantage of the Lehr collapse advance on the hedgerows. At this stage in the campaign US Sherman's didn't have Cullin forks and therefore they have to crash over the boccage, forcing them to bog check. 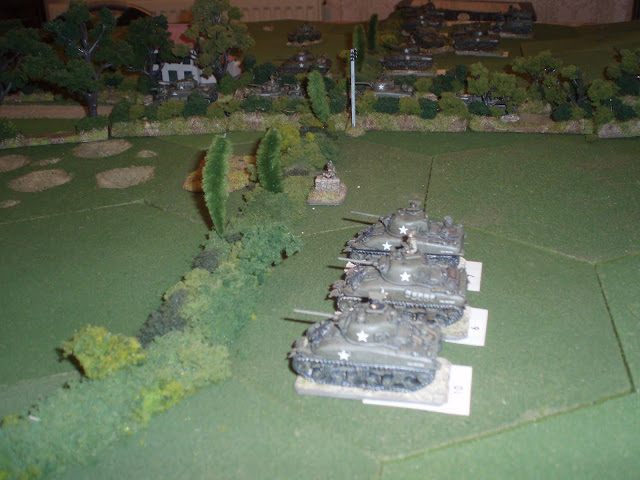 Steve's response to was to rely on the Panzer IVs overlooking the valley to start to thin the US armour. 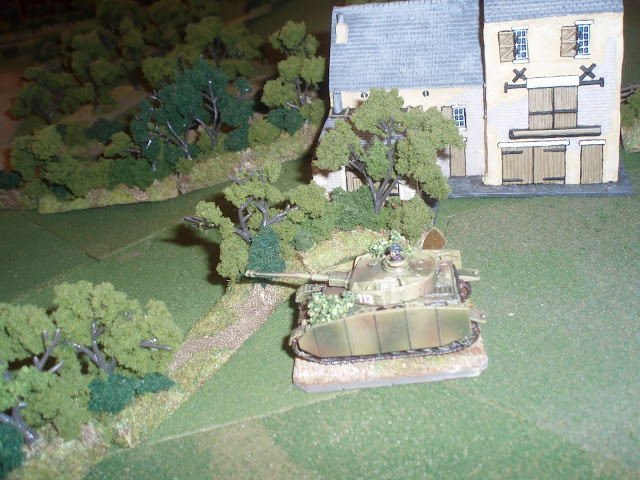 The result was that across my front the Shermans started to burn. 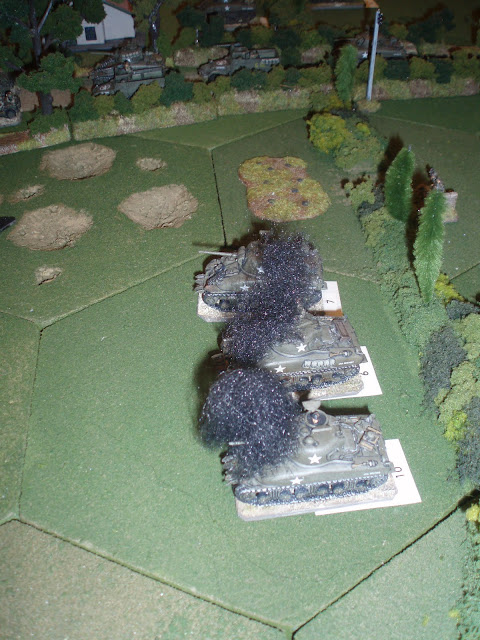 Not only that but my armoured infantry started to take hits as they tried to stalk the panzers with bazookas. 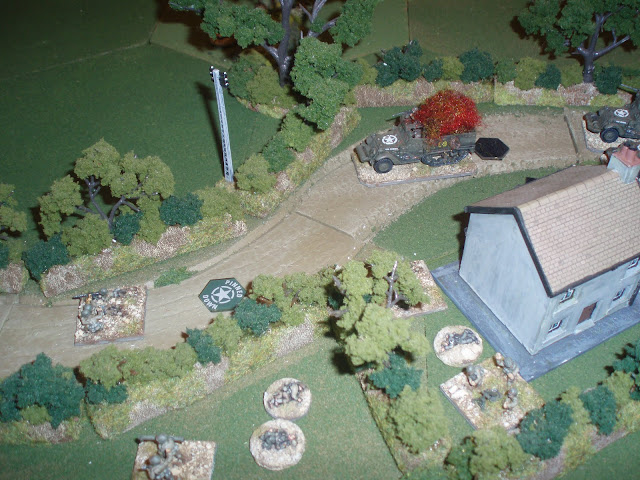 Eventually the US artillery started to get involved, not without bombarding my own positions twice, but it was not enough to stop the Panzer attack which caused my armoured infantry to flee and a Sherman platoon to quit with them. 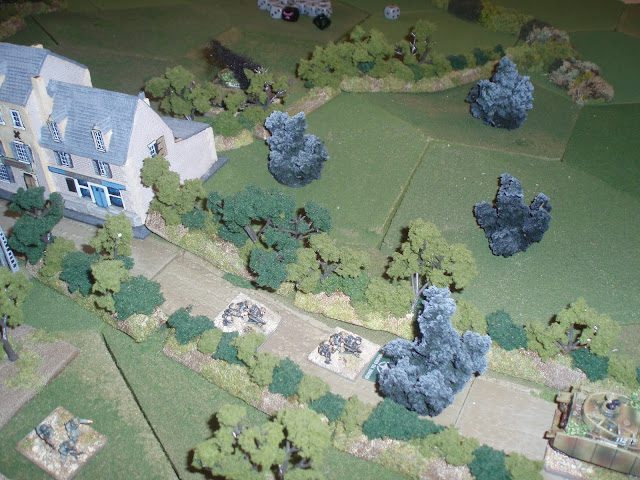 However at turn seven the game was still in the balance and with a roll of a 6 on a d6 the game continued for another two turns, with US shells falling on the German ridge. With both sides teetering on Company morale checks, the shelling managed to kill the German company commander and his 2IC failed to take over when he fled the field. 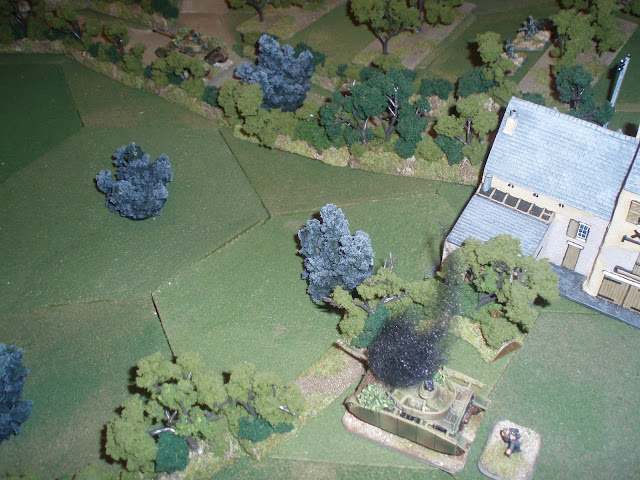 It was too little too late for the Americans and the panzers managed to hold firm to the game end, with the remaining US armour not daring to engage in any further long range tank duels. 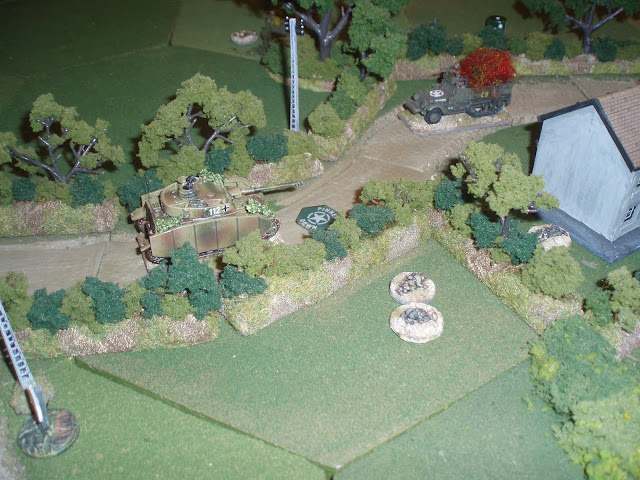 The result was one Sherman and one M8 armoured car totally destroyed and four foot groups killed or wounded giving the Germans 6VP for casualties inflicted (The damaged Shermans and routed groups do not give casualty VPs). In addition the US failure to take the hill gave them a further 5VP plus 4 attachment credits to be used in future games (gulp). The US gained 3VP for the German casualties (two foot groups and the company CO). 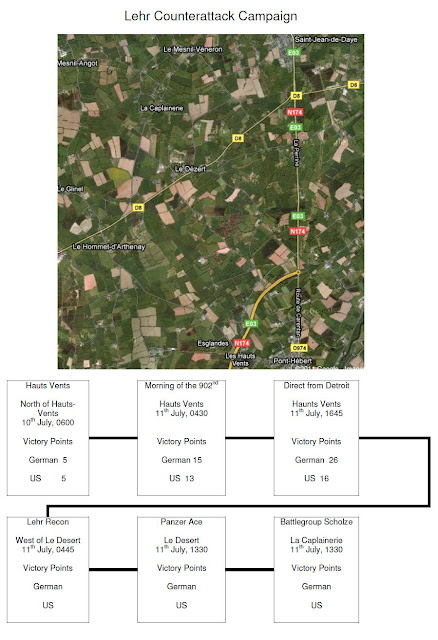 The position at the halfway stage has Panzer Lehr sitting on a commanding lead of 10 victory points with all to play for for the US forces against the second Lehr attack which was aimed at Le Dezert (see map). The next three games are scenarios looking at the battles along this route.
Thanks to Steve for a very fun game that had lots of swings of fortune throughout the day.
Jon
Posted by carojon at 18:32