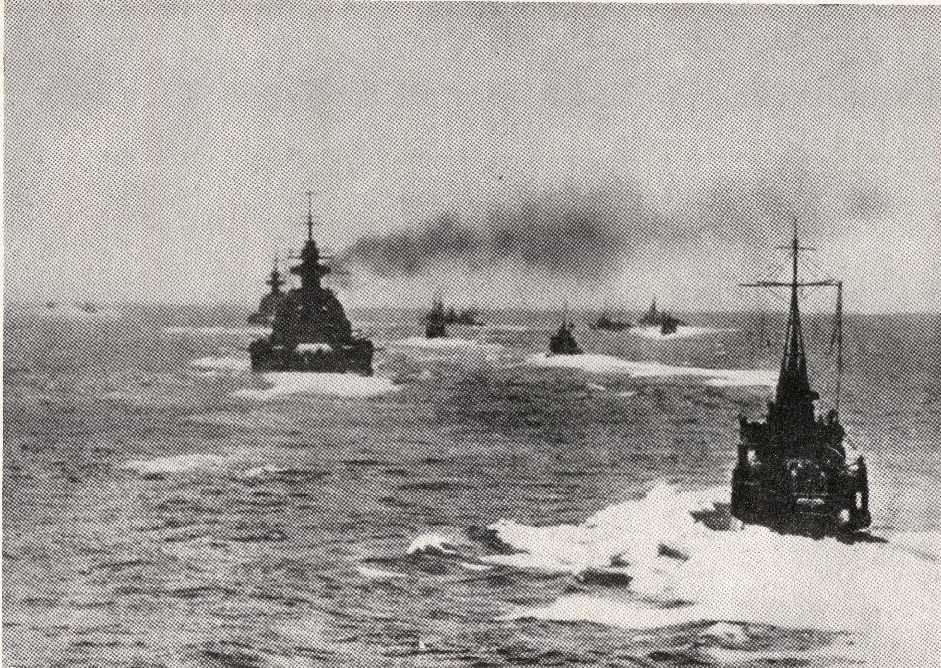 This month at the club I got to try out a mini-campaign that I had always wanted to try and replicate, namely the famous German Naval operation, code named Cerberus, to move its heavy surface fleet of ships from Brest on the French Atlantic coast to Wilhelmshaven in Germany via the English Channel. This daring plan challenged the historical record in that no enemy fleet had successfully navigated the English Channel since the Anglo Dutch Wars.

Originally I had planned to just replay the scenario where the German ships were attacked by five WWI vintage British destroyers, but then I came across this very interesting little game recreating the whole operation as a simple board game and thought about using it on Cyberboard as a basis for fighting the whole thing using my trusty old copy of ShipBase III computer rules to determine the combat.

So having deployed the various combat units on the map, it was determined that the British were on a low state of alert as Admiral Ciliax prepared his fleet to break cover from the protection of the Brest harbour and move out into the Western Approaches.

The first command decision for the German admiral was whether to press on at a full 27 knots and take advantage of the British unpreparedness and cover two areas in a move instead of one but run an increased risk of taking hits from British mines in the Approaches.

(The way we handled the various areas with a minefield needing to be traversed, was based on the fact that in the board game there is a one in six chance of encountering mines. Thus on the table we simply divided the sea area into six zones and the British plotted their minefield in one of them, whilst the Germans pre-plotted their course by selecting a column to move along. If the course went through the mines we moved the action to the table as the various ships attempted to move unscathed until through them. If as happened the Germans chose to move at full tilt then they would not be able to plot a course change to reduce their time traversing the mined area, if they only moved cautiously to one area per turn they could. We used ShipBase III to determine potential mine strikes. This created quite a bit of tension as both sides attempted to bluff about where things would be and as you will see a lot of nail biting with each move among the mines.)

To keep the period feel of the game, I kept the pictures in black and white format interspersed with pictures of the real thing.

The map above shows Ciliax went for the bold move and sped out into the Channel charging through the mines. In response the MTB flotilla at Plymouth motored out to intercept south of Lyme Bay.
However the German Admiral guessed wrong about the location of the mines and soon found himself at full speed ahead in the middle of them in Area one.

Suddenly a massive explosion rocked the Scharnhorst and the mighty ship lost speed and the control of her rudder as a British mine found its mark. This would be another dilemma for the German admiral to deal  with, whether to slow to one area per move and escort the damaged Scharnhorst, taking longer to pass through the danger zone but offering better protection to all vessels or to leave her with a small escort and press on with the faster elements. The order was given to maintain formation.

As the fleet regained its composure and started to exit the minefield, the rear of the column was lit up as the Prinz Eugen kept its destiny with another British mine. The meeting between the two was devastating as the explosion penetrated amidships, detonating Y turret magazine and causing the mighty cruiser to disappear in a pall of black smoke.

As the German fleet pressed on with no time to mourn the loss of their comrades in the Prinz Eugen, lookouts on the Z31 leading the column spotted small craft ahead at 20,000 yards on heading 030'. Alarm sounded over the ship as signal lamps flashed out their warnings to their neighbours. Eight small vessels were counted as the guns were brought round to bear on to the new threat.


Soon the initial salvos from the destroyers were joined in by the secondary and tertiary mounts on the big ships and amidst the shell spashes could be seen the occasional flash as a shell found its mark. In a matter of about 40 minutes of firing the small on rushing craft were destroyed but not before eight 21" torpedoes had been sent on their course of interception.

ShipBase is known for having too high a rate of fire for each class of ship, the original stats being based on best conditions range firing. In combat the rate of fire would be much different and so I reduce all my ship direct fire rates by 50%. 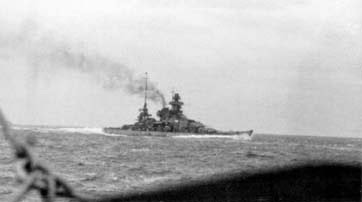 Just as with mines, the passage of a torpedo spread can be just as nerve racking as each vessel that crosses the tracks tests for impact. As the Germans had ordered full speed ahead and "damn the torpedoes" they were not at liberty to make a course change.

The beauty of ShipBase is that you set up the torpedo attack by selecting the speed and thus the range of the launch together with the bearing as indicated by the two markers each carrying an identifying letter; spread A, spread B etc. Once the markers are on the table, the software monitors the time the "fish" have been in the water letting you know when they have sunk or, in a test for contact, letting you know if there was a bang or a dud. Simples!! 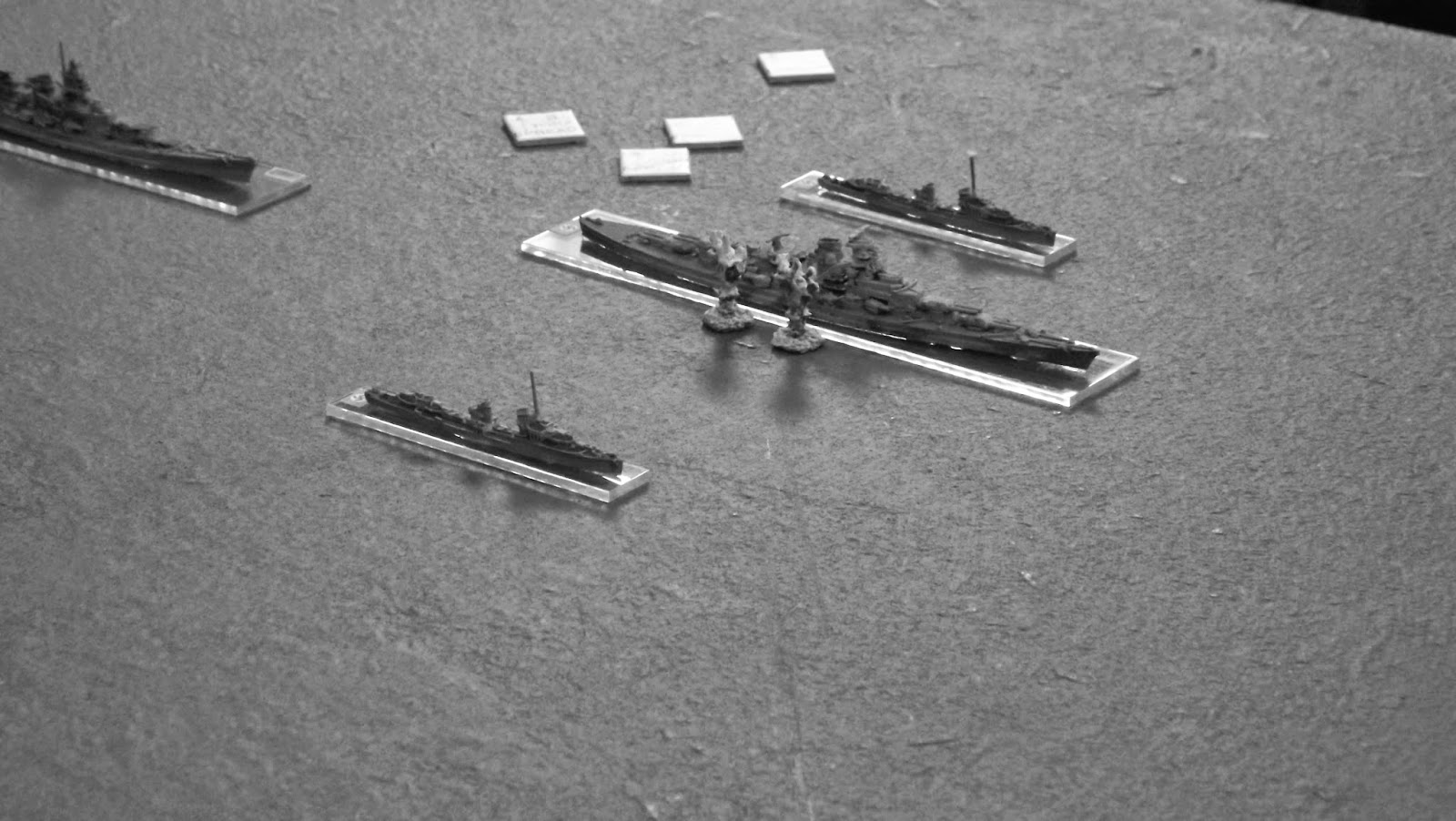 With only eight fish in the water fired on a low speed setting at maximum range, The British were not expecting much action, but as luck would have it and with six tests all missed the Scharnhorst was suddenly shrouded by a massive plume of water as she was struck amidships. The blast caused 25% flooding reducing the speed of the great ship still further.

Needless to say, the remaining torpedoes missed and the German fleet limped on further up the Channel. 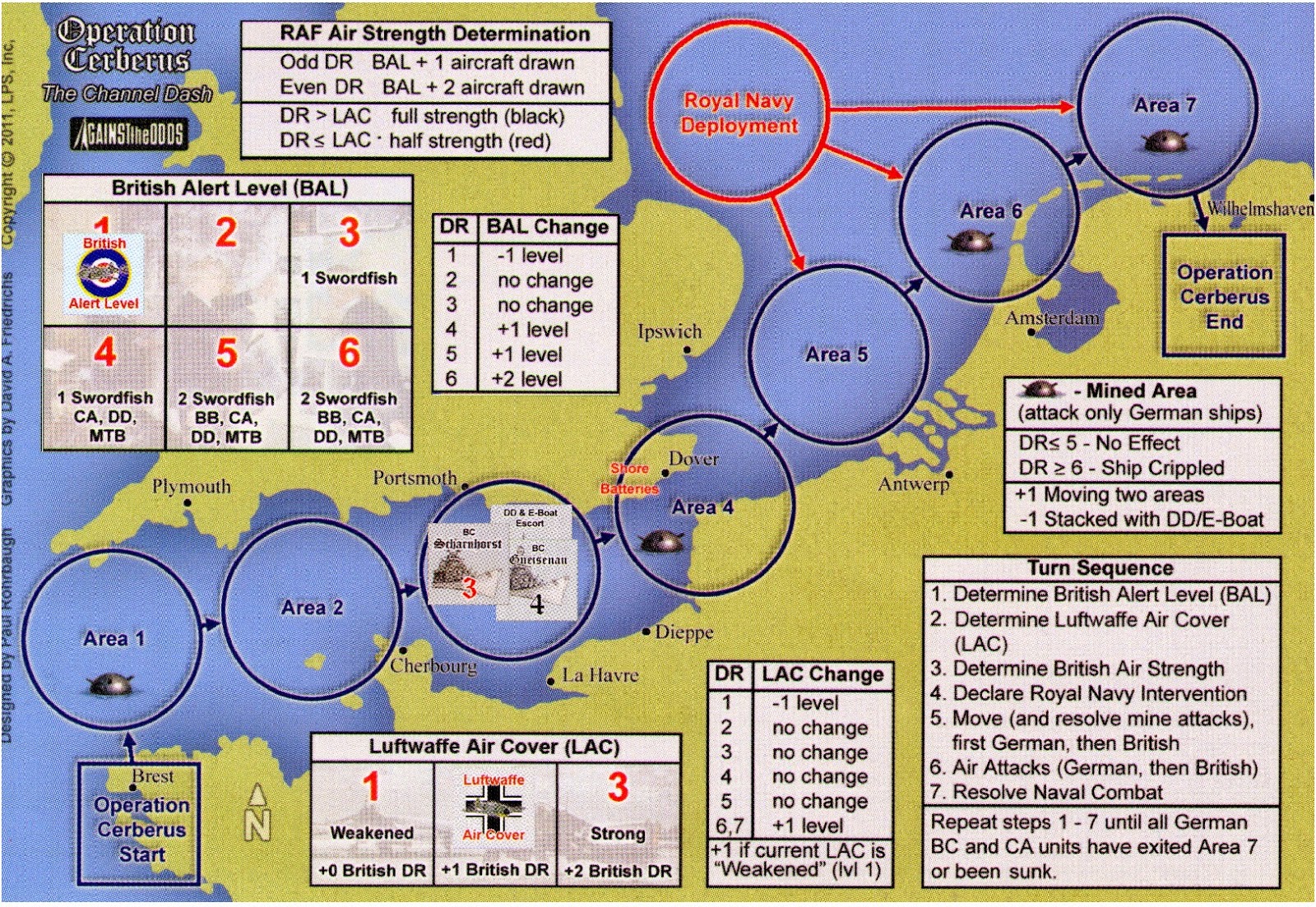 The map above shows the situation mid-channel with Scharnhorst's counter flipped to its red side to indicate the damage and Prinz Eugen's counter removed. With five more areas to cover before slipping into Wilhelmshaven it was looking pretty serious for the remaining German ships, if the British became aware of exactly what was going on. Had those pesky MTB's given a full report before being destroyed? Had the Luftwaffe done their job in keeping away RAF reconnaissance aircraft?

Well apparently the answer to those questions was a resounding No and Yes, as try as they might the British command testing as each area was entered could not get a d6 to roll any higher than a 4. The table on the map shows the scores required to raise or lower British Alert Levels and only one 4 was rolled which only moved the response up one level. It is only when the BAL reaches level 3 or above that a response kicks in and as the Germans moved clear of the Dover straits the British were hoping to at least get in a Swordfish strike at the end of play. But it was not to be.

Admiral Ciliax breathed a sigh of relief as his reduced force traversed the mines in Area 6 and plotted a course for Area 7 and then the sanctuary of Wilhelshaven. This was literally the last chance for the British to really spoil the party as the minefield off the German port was deemed to be of moderate concentration rather than a light field as all the others had been.

One more strike on the Scharnhorst could be very serious and so avoiding this field would be quite important to avoiding further loss. The game of bluff started up again and the British commander having noted that in each previous course plot the German admiral had attempted to move his ships along each board edge decided that he was more likely to break the pattern and try to move up the centre. 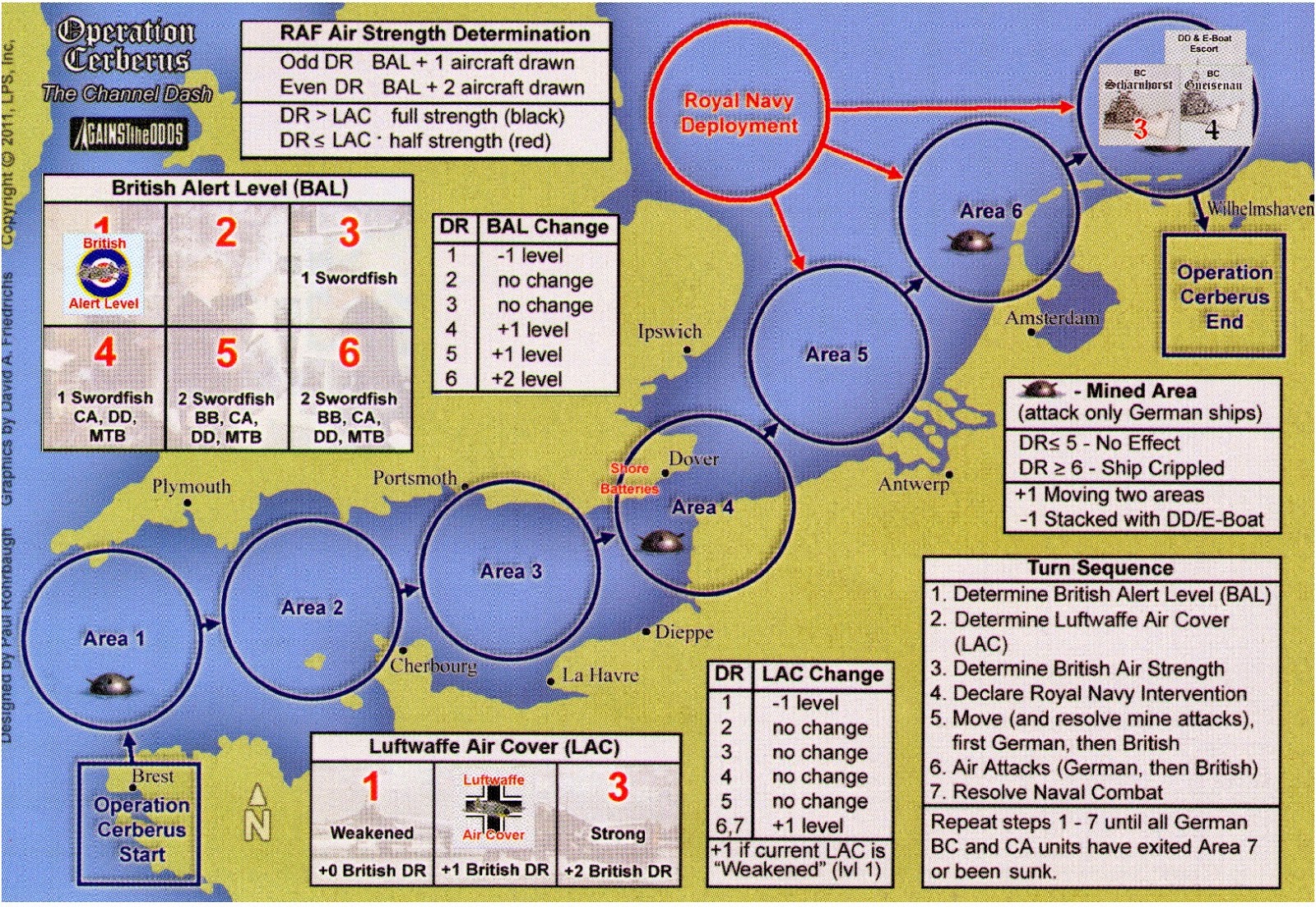 Wrong! Admiral Ciliax kept to his plan and stayed on course along one table edge, skirting the edge of the British mines and entering port without further loss.

So our game ended with a tactical victory for the British having destroyed one of the German big ships, Prinz Eugen, and badly damaging the Scharnhorst. If the God of Dice had not been supporting the Germans it could have possibly been a lot worse.

Thanks to Ian for a very entertaining afternoon in the English Channel.