Introducing two members of the Devon Wargames Group, Colin & Chris, who had only very limited experience of Wings of Glory. So we began with a one on one scout duel by way of firming up on the rules for manoeuvre and firing. On the one side was an Albatros DIII and this was opposed by a Hanriot HD1. An even fight until Chris drew a boom card. OK enough said:) By which time both players were more than competent with this part of the game. 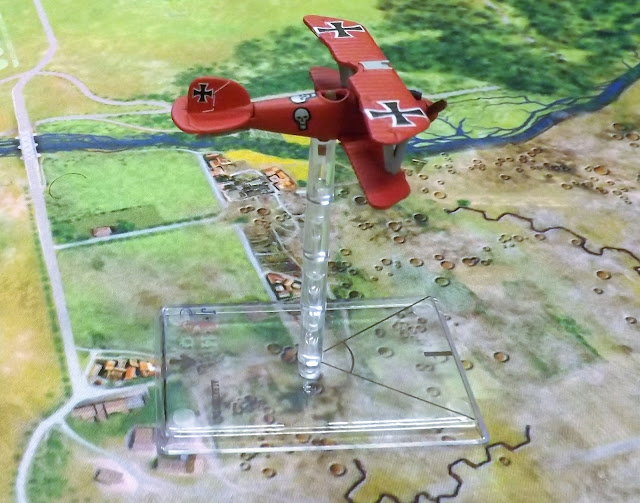 Next up – A scout to escort a two seater on a photo recon mission. Pretty straightforward – the two-seaters had to get within long range distance of a marker, pick it up, then run for home.

On one side a Breguet 14, escorted by a Hanriot HD1; on the other side an Albatros DIII escorting an Albatros CIII. Both players were very quick to learn the two seater rules, but having succeeded in the race to the photo recon mark, Chris again picked up a boom card, this time for the CIII. Well done Colin.

OK so a quick run through the bombing rules and training over. Down to the real business of the
day.

The Battle of Istrana
Borrowed from Andrea Angiolino who kindly permitted the use of his scenario (at least, I think it is his). The details can be found via the following link:
Wings of War Forum 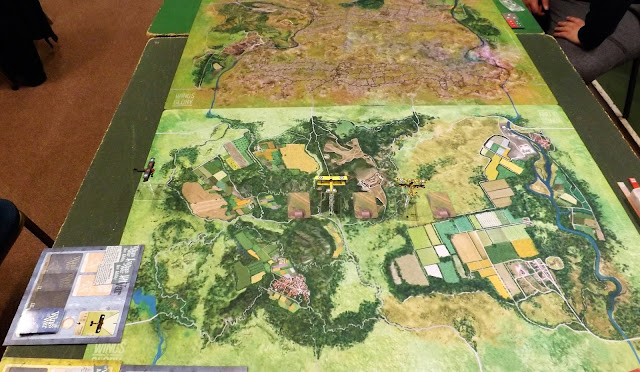 The set up was pretty much as Andrea outlined, except this game was played over three mats instead of two. Two Hanriot HD1s flanked by three targets on the local Italian aerodrome. Plus a supporting Sopwith Camel that happened to be in the area when along came some Austrians & Germans, seeking to bomb the airfield in revenge for an outrageous Christmas Day attack by a certain William George Barker! 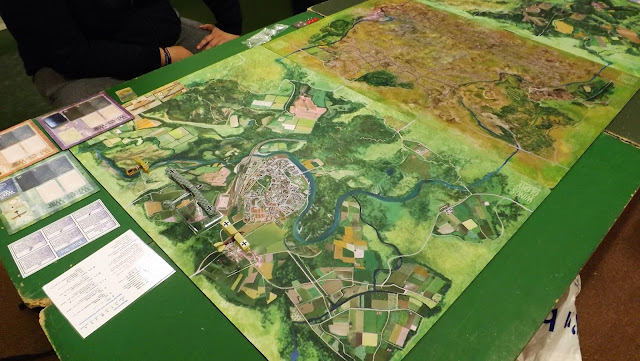 The Austrians/Germans force consisted of one Gotha V bomber carrying two bomb loads; an Albatros CIII carrying a single bomb load; both escorted by an Albatros DIII. (Note: Historically not accurate but see the link for the explanation). 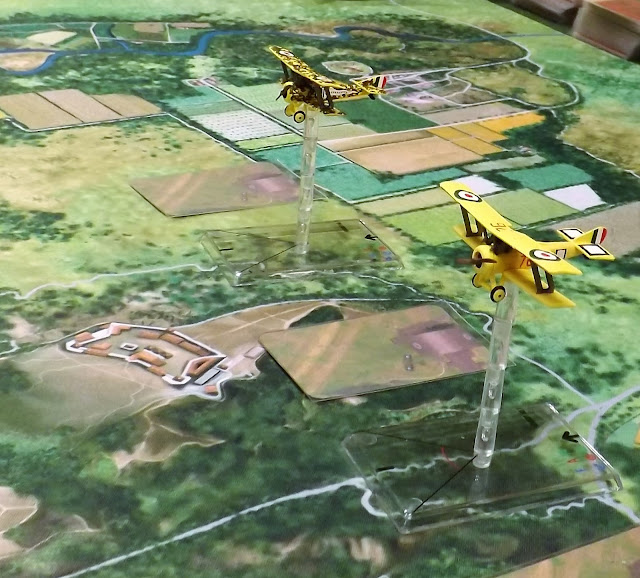 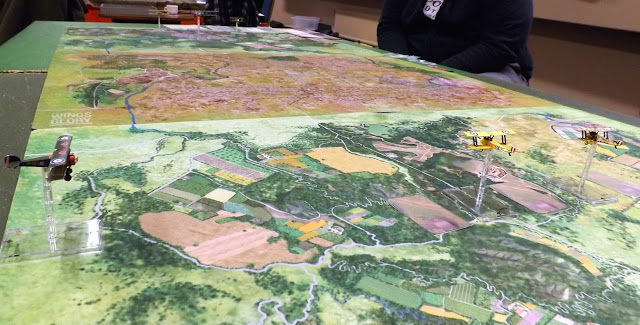 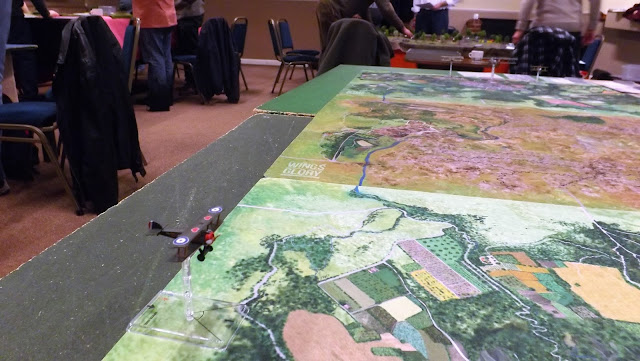 The moment the Austro German force began their attack, directly towards the target area, the Italians attempted a flanking manoeuvre, whilst the Camel was more direct. 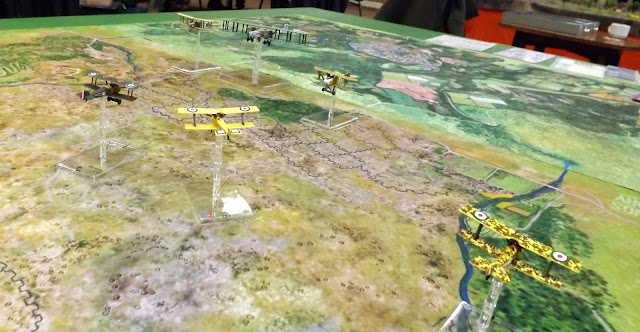 The attack was strong enough to force the Gotha and the CIII to break right and one of the Hanrios and the Camel quickly got onto their tails. 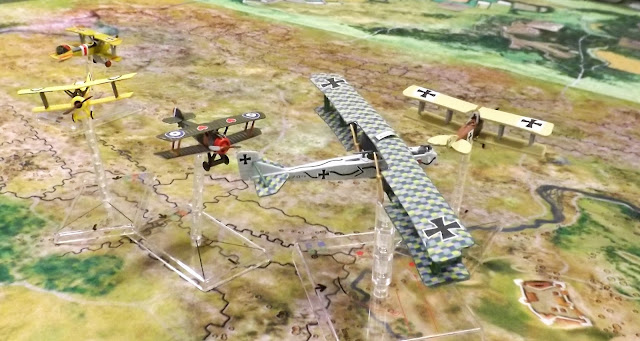 The fighting at this point was very fierce with the Gotha, in particular, having to soak up a lot of fire
power. However, the rear gunner proved very effective, so that, when the DIII scout came to assist, the result was to force their two enemies to break off. The Hanriot was exposed to some lethal gunnery and was shot down! 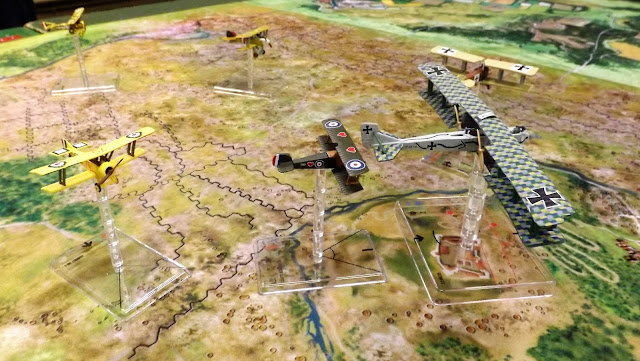 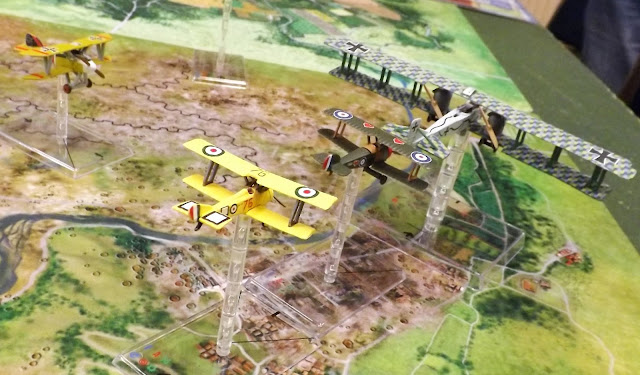 Meanwhile the Albatros CIII flew on and successfully bombed the first airfield target, destroying a
number of aircraft on the ground. It then returned to help its comrades, attacking the Camel that had
continued to harass the Gotha. The combined fire from the two Austro/German bombers was enough to overwhelm the hapless Sopwith. Revenge was exacted and the Camel spiraled to the earth. 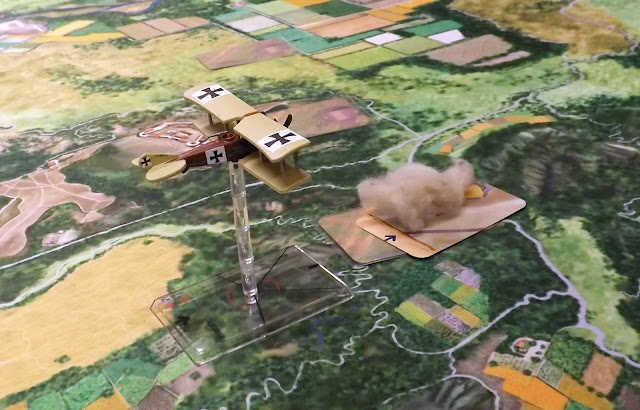 At this point, one would be forgiven for thinking that the Austro German flight had done enough to end the fight. But not at all. Although the Gotha went on to successfully bomb one more target (the third and last being missed when it over-ran the target) the plucky surviving Hanriot HD1 pilot would not give up. Oh yes! The Gotha went down, when the unfortunate owner drew his third boom card of the day – OK Chris, so we have all had days like this :) Congratulations to Colin!

But hold it one second. The Austro German mission was pretty much a success. So despite the bloodbath, it was decided that on this occasion the Austro German force had won a marginal victory.

Congratulations to both players. 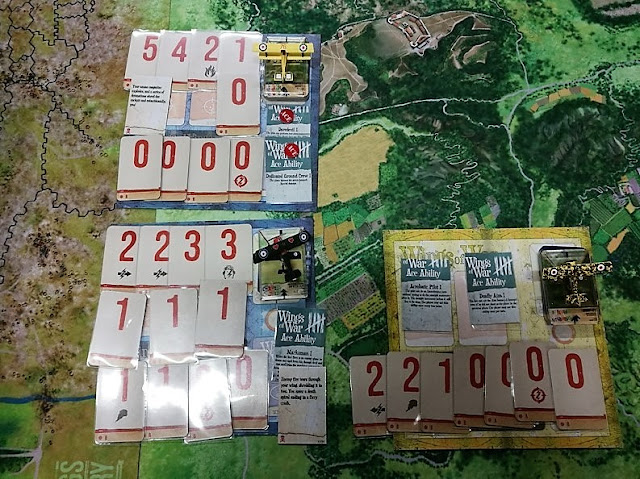 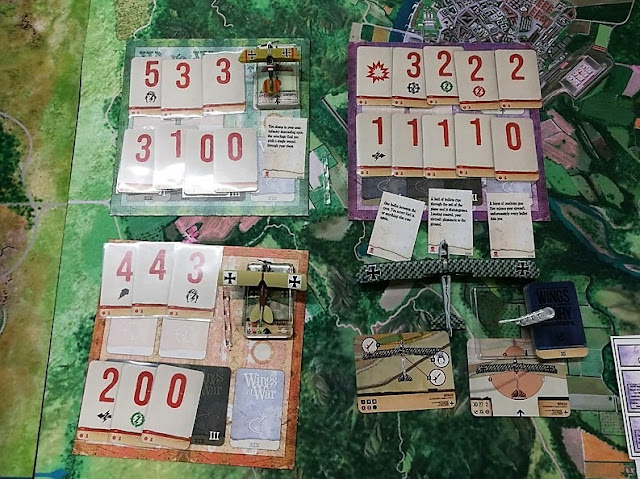 My thanks to Jonathan Jones for the splendid pics.