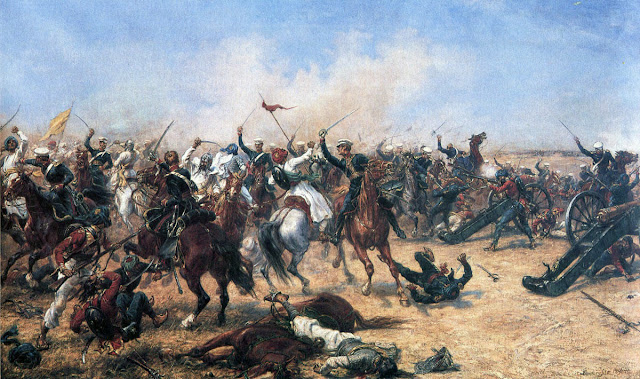 Another of the games at the February meeting of the Devon Wargames Club was one I put on using my new 1/72nd Newline Sikh wars collection and was very loosely based on the Battle of Mudki 1845 (so loose that the best that could be said for the accuracy is that Sikhs and British were involved). 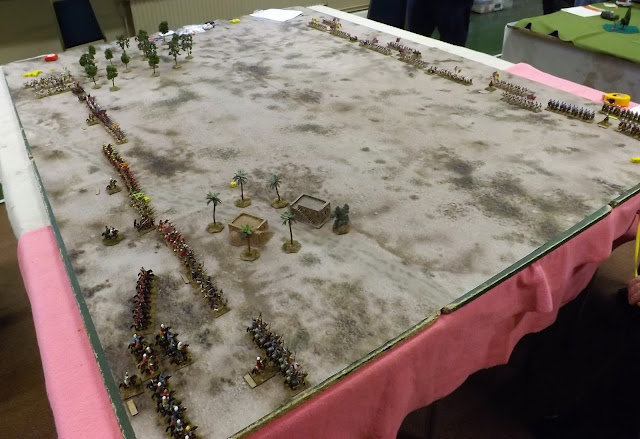 I have been looking for some time to try and find suitable rules that have the magic mix of gameplay and period character but without success , the nearest I have come is with ‘Flames in the Punjab’, a spin off from The Sword and the Flame skirmish rules by Larry Brom. This supplement was written for battalion level games especially for the Sikh wars but still uses many of the original rules from TSATF (both sets are needed). I bought my copy from Sergeants 3 but forgot to buy the original set. 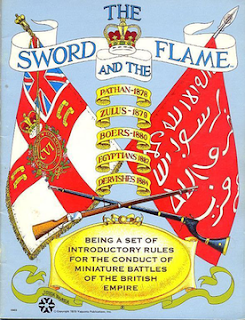 I liked many of the concepts from the rules but decided to re-write a set from scratch using what I liked and inventing the rest, the result was five pages of A4 and I tested them safely away from club just to make sure that they worked, which I was pleased to see that they did. Some tinkering resulted in version 2 which was used in this game (Version 3 has replaced them, still on five pages but the font is getting smaller)

The British had been informed that a small force of Sikhs were approaching from the Mudki area and so quickly deployed onto the plain in front of their camp, the main Imperial army was still assembling from all the corners of India therefore this advance force were under orders to not stray to far forward however only an absolute bounder would refuse an opportunity to fight and so upper lips were made suitably stiff. 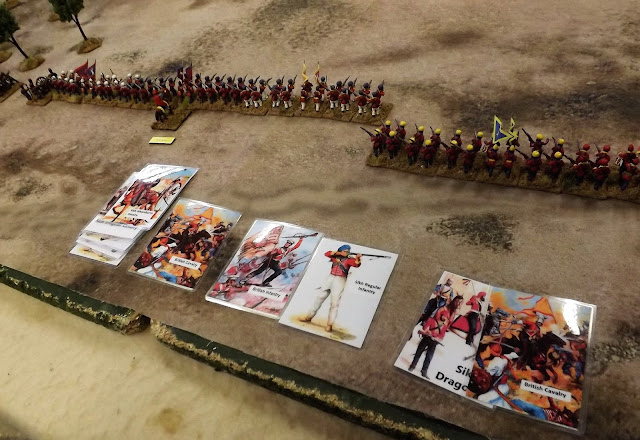 The British consisted of three infantry brigades, one HM battalion and two Sepoys per brigade with artillery attached to each accordingly. The cavalry consisted of the 3rd Light Dragoons, Governor Generals Bodyguard and the 5th Bengal LC.

The Sikh force was a bit more mixed, there were six battalions of Sikh infantry split into two brigades, a three mob brigade of irregular infantry, a unit of Akali fanatics and a unit of Jagirdari feudal infantry. The cavalry was made up of a single unit of Sikh dragoons, one lance armed Ghorchurra (this term is also applied frequently to the everyday cavalry) and two irregular units .

Both sides being both unfamiliar with the rules and the forces involved just sat there for a long time using only their artillery to relieve the tedium until I eventually found the correct voltage on the encouragement wand to make them advance.

As the Sikh artillery had by now gotten the worst of the exchange their whole force advanced all along the line, sending the cavalry rapidly forward on their right wing and the irregular infantry pushed through the jungle (a 19th century description for what we call woods, shrubs and bad going). 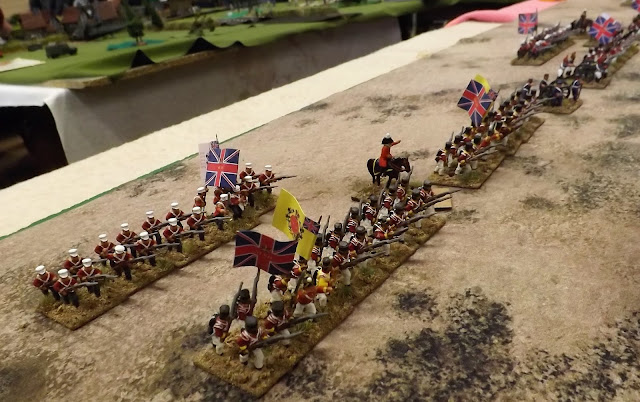 First into action were the light dragoons and the Ghorchurra who both strived tirelessly to not win the melee, the Sikh dragoons advancing next to them got badly mauled by the Sepoys holding that end of the line and who had obviously been paying attention at firing practice because they handed out more of the same to the Jagirdari infantry, eventually the Ghorchuras failed their morale and threw high enough that any remaining figures were taken straight off the table however by that time the irregular Sikh cavalry had joined in pinning the British dragoons. The remaining cavalry had all started their own melees with weight of Sikh numbers holding the better Sepoy cavalry. (version 3 now has a three turn melee limit) . 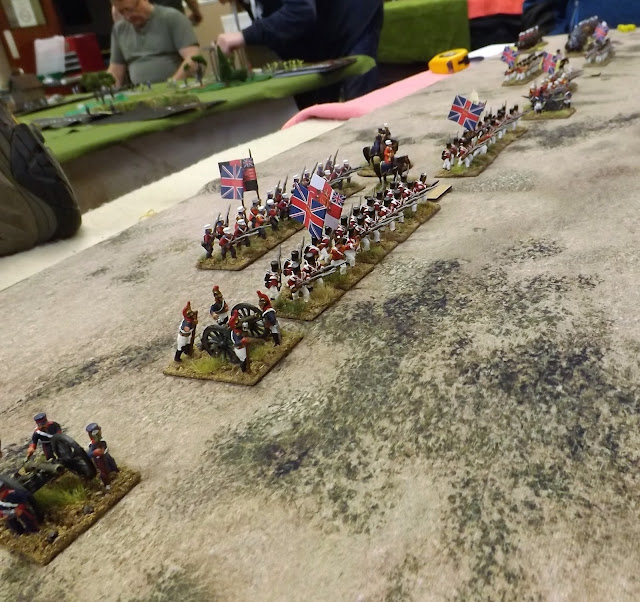 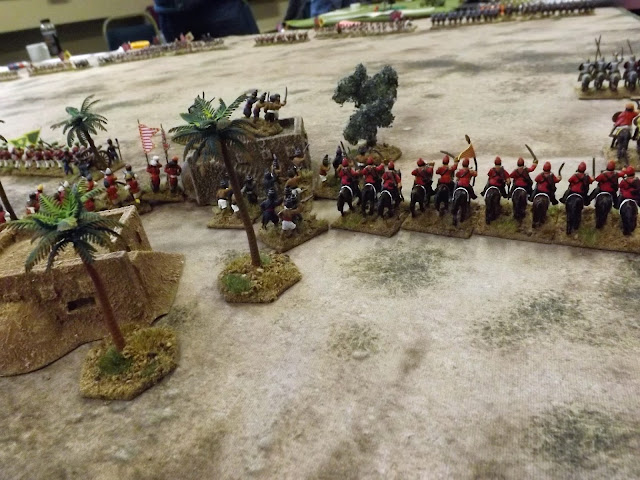 Ignoring the irregulars pushing through the jungle the British right wing hurried across to help their friends who had been getting the worst of the fire fight, the Sikhs had skilfully arranged their forces so that they would all throw very lucky dice when shooting and the British line was starting to look shaky especially the Sepoys. 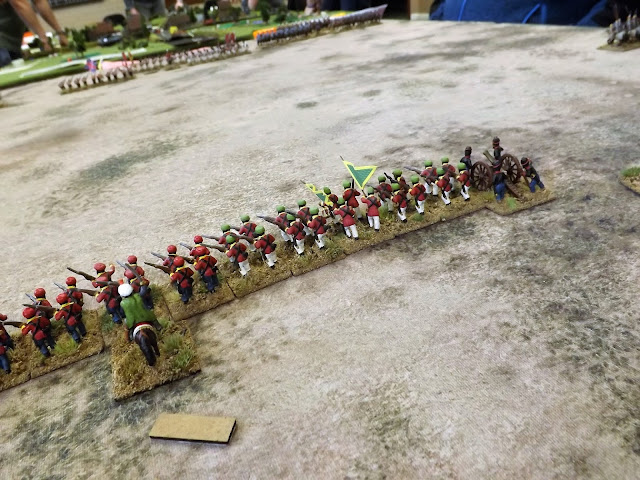 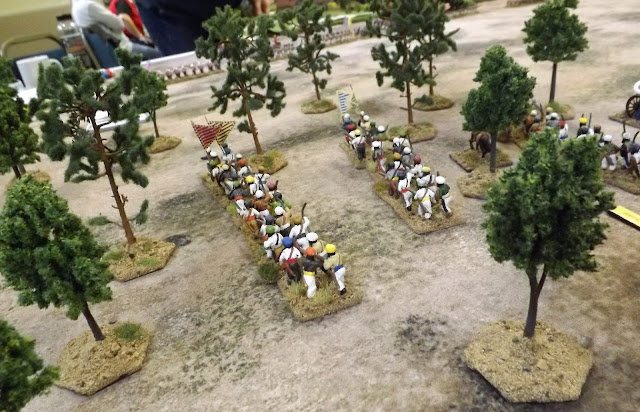 The far left Sepoy battalion had now obviously forgotten what they had learnt at target practice or were distracted by the shiny metal quoits whizzing towards then as they only managed to hit one of the charging Akalis even at short range . 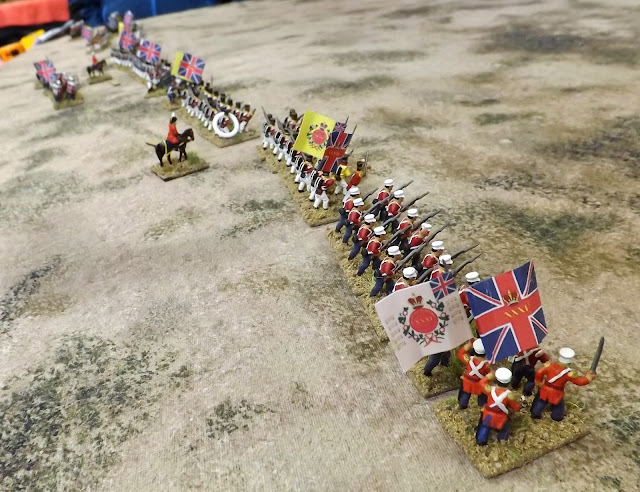 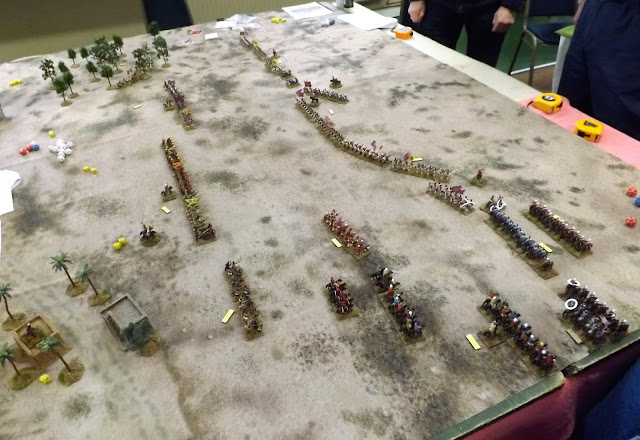 The hard pressed British centre looking to their left were dismayed to see their potential saviours had now stopped and were trying to shoot to a halt the charging Sikh irregulars who had finally traversed the jungle . Despite their poor starting morale only one unit was sent packing and the others raced into melees that forced a Sepoy battalion to retreat. 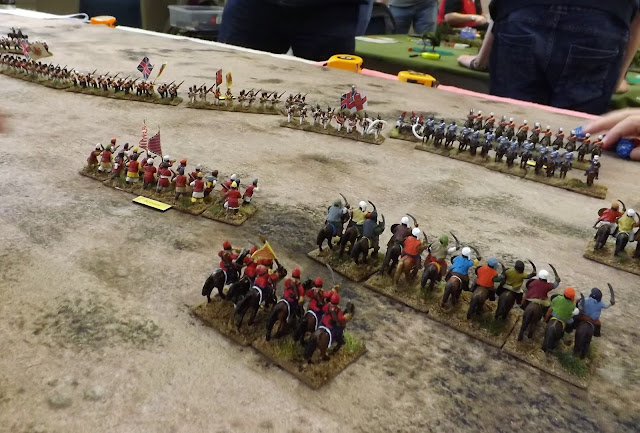 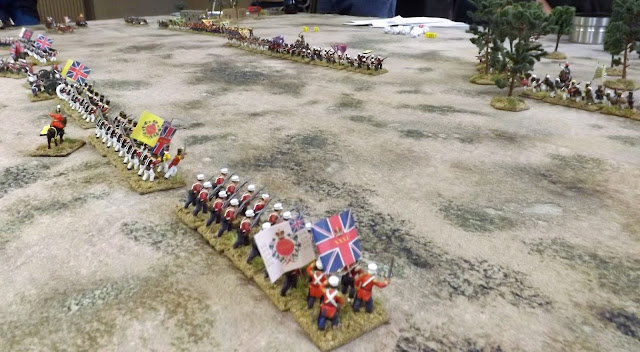 By now the other two British brigades were badly damaged with two units already taken off the table and the rest were down to a level where you don’t want to hear the word morale throw. The Sikh regulars, although showing signs of wear, clearly had the upper hand and could still maintain an unbroken line. 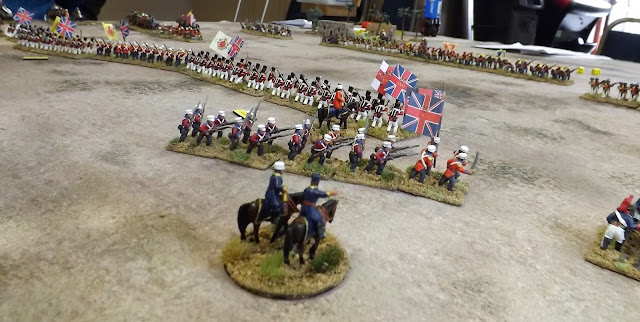 The final turn saw the British artillery that had been trying to desperately plug huge gaps in the line get shot to bits and with another battalion destroyed it was time for flags to be hurriedly taken of poles and given to a horseman to ride rapidly away with.

I wrote the rules written to encourage forward movement and I think the players involved would do things a bit different next time. The sides are quite even and although the HM infantry are good it isn't by a lot so they cannot sweep away colonial forces as in most games.

The game also raised a few possible improvements and some things that I hadn't even considered and have now been added into the rules or clarified a bit better and I suspect there may well be a version 4 at some time after a few more games however they did hold up for our game, which was nice. 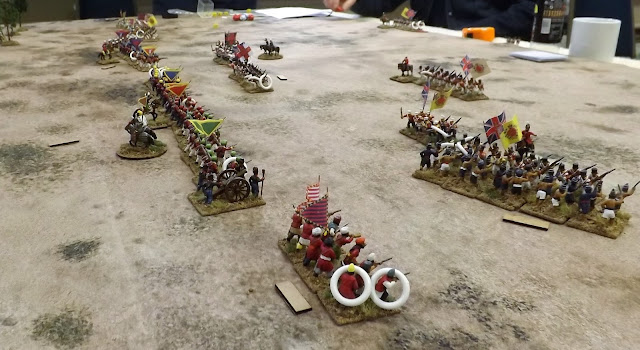 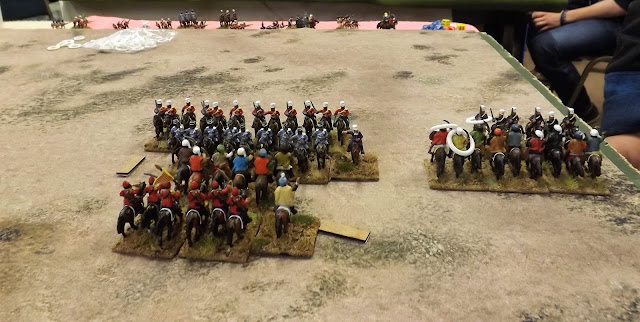 My thanks to Nick, Steve H and Mike and it was nice to see a returnee to the club from long, long ago, who frankly we all thought was dead, fortunately he is also called Steve so that’s all right. 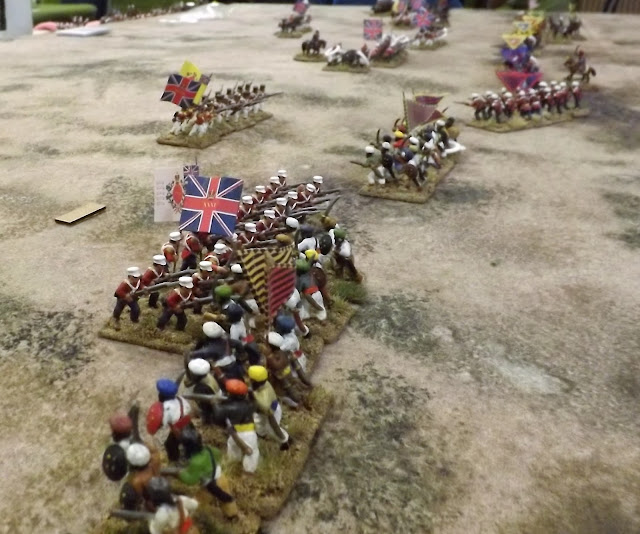 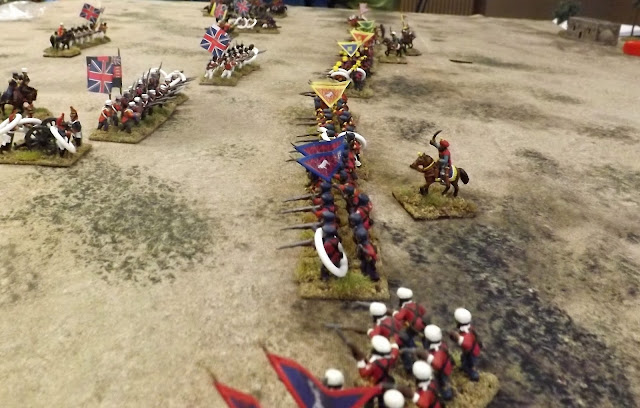 This has been a Mr Steve production.
Posted by carojon at 08:31