Over the Hill - I Aint Been Shot Mum (IABSM)

Ian brought along his 15mm collection of WWII Normandy troops and Bob and myself took command of the British and German forces respectively.

The scenario along with others is available to download from the Lardies Yahoo Group, which is well worth joining if you are interested in what I and many of the chaps in the DWG would consider one of the best WWII Company level rule sets available.

The map below lays out the terrain for the game which sees a British infantry company of three platoons supported with a Vickers HMG section and a troop of Shermans tasked with taking Hill 203 at Belle Vue Farm. Their attack is preceded by a good old "stonk" (pre-bombardment) provided by the Royal Artillery.

The German troops defending this sector are a two platoon Panzer Grenadier company from the Hitlerjugend 12th SS Panzer Division supported with a machine gun section, anti-tank platoon and some off table on call 105mm howitzers

The German defenders are able to set up in the hedges in front of the British deployment line marked on the map all the way back to Hill 203. 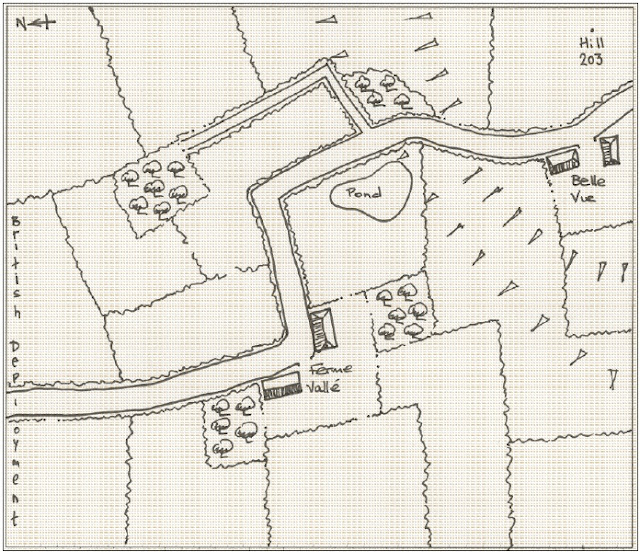 HISTORICAL BACKGROUND
On June 6th, 1944, as part of the largest amphibious operation the world had ever witnessed, the
British 50th Infantry Division - the Northumbrian - was given the task of assaulting Gold Beach. A
seasoned unit and veteran of the North African campaign, the 50th stormed ashore, and by day’s end
had achieved nearly all of their initial objectives.

But that was two weeks ago, and Allied forces have suffered one setback after another since then.
The Germans have successfully contained the invaders within the beachhead area, having repulsed
every attempt to break out.

But the dawn of a new day brings with it another attempt to break the entrapment. The next big
push - Operation Epsom - is about to begin, but before it can commence, the Allies need to be able
to see “Over the Hill.”


BRITISH BRIEFING
It is June 20th, 1944, and you are Captain Roger Roughshaft of the Cheshires, fighting your way through the dense bocage and orchards of Normandy in the face of stiff Jerry resistance.

Ahead of you lies Hill 203, a mere pimple on the face of the French “campagne”, but now of some import. Ferme Belle Vue apparently commands striking views across into the enemy rear, so you and your men must risk life and limb to capture it.

Hill 203 is only accessible by one road, and the bocage means that your supporting armour will be restricted to it. From what your chums have told you, the hill is defended by enemy infantry and AT guns – and they should know, most of ‘em got shot up trying to capture it afore you!

You have persuaded HQ to give you a bit of preliminary bombardment before the show starts. You may allocate three stonks to the table before starting off.


GERMAN BRIEFING
It is June 1944, and the Allies have invaded Normandy, set on destroying the great dream of a united Europe. In the Reich all energies are being trained on throwing this enemy back into the Channel in order that the great liberating crusade against bolshevism can continue in the east.

You are Hauptsturmfuhrer Wim van Hemker, commanding a company of the newly raised 12th SS Panzer Division, Hitlerjugend. Two years fighting in the east with Nordland has made you a tough soldier, and you worry for the young volunteers that surround you. Two weeks fighting around Caen has seen you slow down the Allied advance to a snail’s pace, and cause losses that you are sure they cannot endure for long.

Now your Company, reduced to two platoons, is responsible for holding the critical Hill 203. Little more than a ridge, this formerly  insignificant piece of French farmland is now of strategic importance and must be held at all costs. Thus far you have repelled three Tommy attacks. The bocage country in which you are operating limits Tommy armour to a single track that runs up the hill, you will hold firm against any fresh attacks.

Your men are in good spirits, the fresh influx of volunteers have found their feet thanks to the experienced cadre within the group. You may call upon a battery of four 105mm artillery pieces if you require support; Hauptmann von Englers of the 328th Artillery Regiment has been allocated to you to act as a spotter if needed. All artillery will be called in through him. You have no vehicles, all have been withdrawn due to allied air activity.

With the German positions marked up a amid plenty of dummy positions, the British artillery stonk announced the start of the British attack and needless to say the bulk of fire was directed to the commanding heights of Hill 203 where the German anti-tank gun platoon with its Pak 40 and Panzershreck teams set up in the nearby hedgerows took early shocks and a casualty from the British fire.

The game started with the usual 'cat and mouse' manoeuvring as the opposing blinds attempted to get to the best positions whilst doing their best to spot any likely opposition and get their fire in first.


The British advance quickly developed and the blinds movement soon indicated a successful infiltration down the left flank of the German positions, using the cover offered by the thick bocage hedgerows that allowed them to build up a strong position to base an attack from once the enemy were spotted.

It was now a question of who would get the drop on who by being able to open up from an advantageous position.


As the ranges between opposing blinds dropped rapidly the first dummies were identified and removed from the table, but inevitably others revealed opposing troops and the first units on to the table started to appear.


One such are that revealed a Panzergrenadier platoon in occupation was the forward farm at Ferme Valle where the flanking infiltration ha rapidly unhinged the German position but unable to relocate in time the German commander soon realised he had Sherman tanks knocking at the front gate only to find his position suddenly raked from a different direction as Vickers heavy machine-guns opened up from his left flank devastating his command in one fell swoop.


It is a tribute to the determination of the SS soldiers that the defence didn't collapse in the first fusillade of British fire, but their return fire when it came was feeble due to the shock and casualties sustained with the only real success being a solid Panzerfaust strike to the lead Sherman which began to burn fiercely with no survivors as its ammunition started to 'cook off'.

The tankers revenge was soon in coming as their 75mm HE shells ripped the farm house to pieces killing SS men at the windows and setting the farm house alight with the SS Commander dead among it shattered rafters and smashed walls.

The battle for Ferme Valle was over as soon as it started and the surviving SS soldiers attempted to fall back across the field and nearby dried up pond to its rear, but they were not to get very far as British troops and tanks moved in to mop up cutting down any of the SS who showed the slightest resistance.

As the battle lower down the valley erupted, another one commenced soon after as the defenders on the top of Hill 203 started to identify British troops movements to their left with a request sent of to the supporting guns for a mission among the hedgerows to their front.

Despite successive calls for support, the guns were unforthcoming and so the German defenders were forced to resort to other options.


The decision to open up with the weapons close at hand was made more easy with the sight of British troops pushing out across the large open field to the their left, supported by carriers.


As the British troops made a dash for the cover of the next bocage hedge line the carriers were struck by Pak and Panzerschreck shells rapidly reducing two of them to burning wrecks as the troops on foot were subjected to raking fire from the infantry and MG42's set up close to Belle Vue Farm.


The German attack was damaging, effectively knocking out two sections of British infantry, but leaving the other two able to close in on the hedges lining the left flank of the German position, now threatened by the other unopposed British platoon, supporting heavy machine guns and tanks advance to their right front along the road.


We stopped the game there, but as the German commander, I rather felt the position was becoming untenable leaving the remaining German troops with two options, to either sell themselves dearly atop their hill or to try and cause casualties whilst relinquishing control. Either way was not a good German result.

Any counterattack on the weakened British platoon at best supported by the German artillery when or if it came would likely leave the rest in such a parlous state as to be in a poor condition to resist the follow up British troops with tanks. 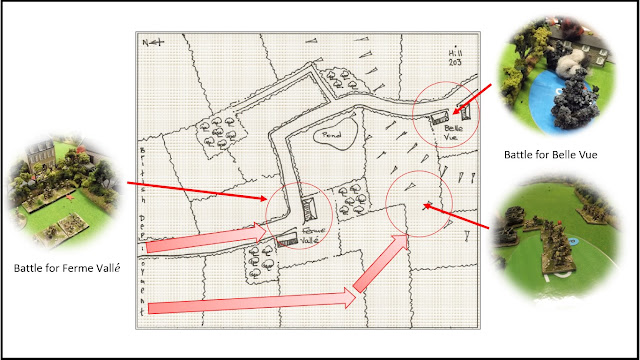 This is the first time I had played this particular scenario and I have to say it gave a very good game, posing questions for both sides.

On reflection I might have put my AT assets further forward to try and ambush the tanks early and to have kept my infantry platoons in closer support of one another rather than the spread out in defence in depth as I used in this game. The first fire coming off of a blind on spotted enemy troops can, as we see, be battle turning and the German troops, very often not moving, are at an advantage to getting the drop on their British counterparts.

Bob made very good use of his blinds to rapidly advance through weakly held German areas and thus set up his troops in very advantageous positions when the inevitable spots allowed both sides to open fire.

Thanks to Ian for pulling the game together and to Bob for a very fun fight among the hedgerows.
Posted by carojon at 10:31