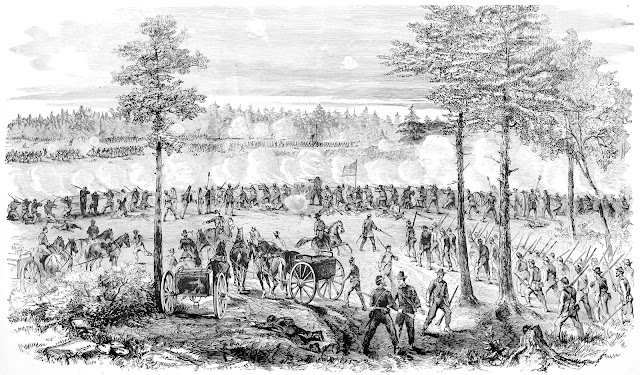 ACW is a popular era to play at the DWG so when a new version of Brigade Fire & Fury came out, we all looked around to see which person in the club would be the first to weaken. 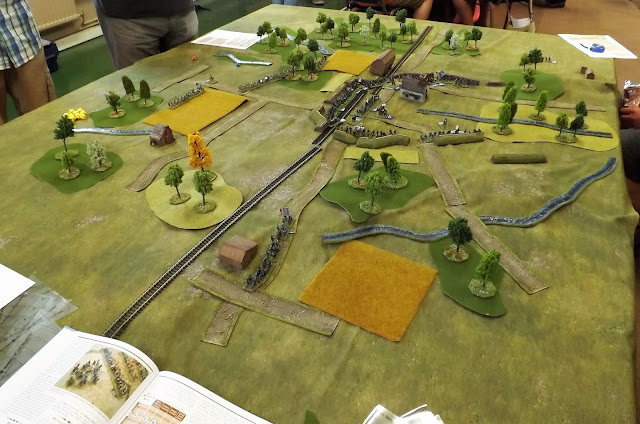 Steve Land was that person and so we agreed to put on a game in 15mm to see what had changed and if was for the better. 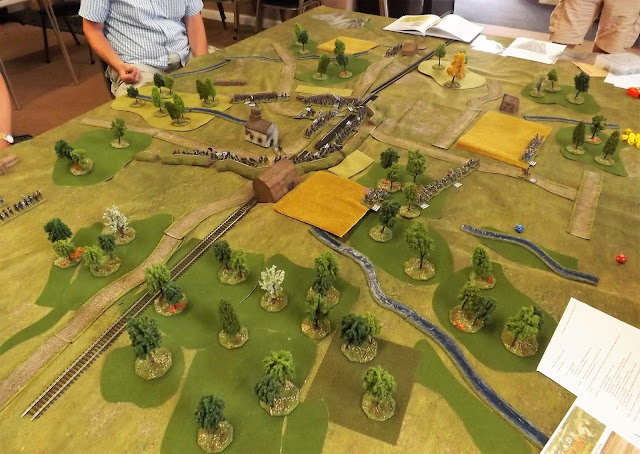 There are three scenarios included in the book and we chose the smallest one to make sure that we actually finished it during club hours. Steve has also done a rough précis of the differences between the three sets, BFF, RFF and BFF2 which I will include at the end. 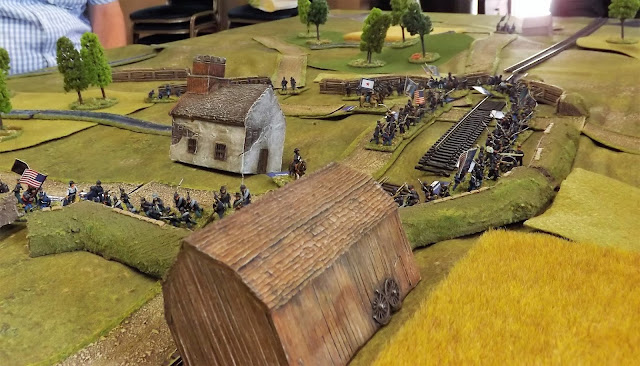 The table was set out as per the book as best as we could make it and the scenario set a twelve turn limit with the last two turns being twilight, we also made sure to play all the special rules. I have included a map which outlines the actual battle and can be used to follow our game.


Onto our Game:
Wilcox’s division was the only Confederate formation on the table and it headed straight towards the Union entrenchments, Smyth’s Union Brigade coming on table, marched quickly up the road towards the rest of its division. 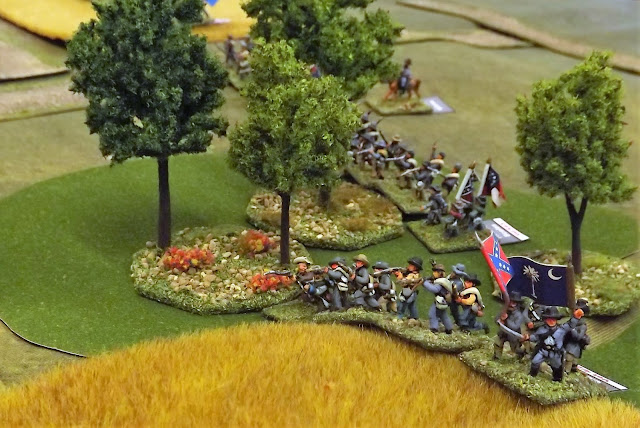 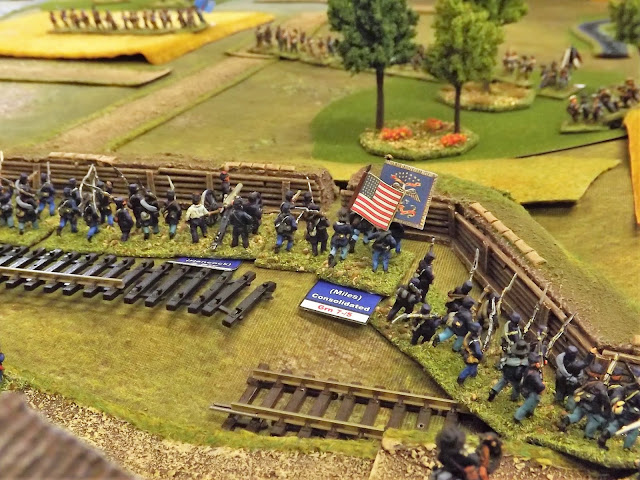 In their first assault Wilcox’s four brigades had varying degrees of success, McGowan and Anderson faltered due to losses and disruptions on the approach, Scales managed to charge in but bounced back however Connor’s Brigade carried the defensive position forcing the Consolidated Brigade back and overrunning a battery but seeing the blue hordes waiting for them they sensibly decided to withdraw back over the defences to rejoin the rest of the division. 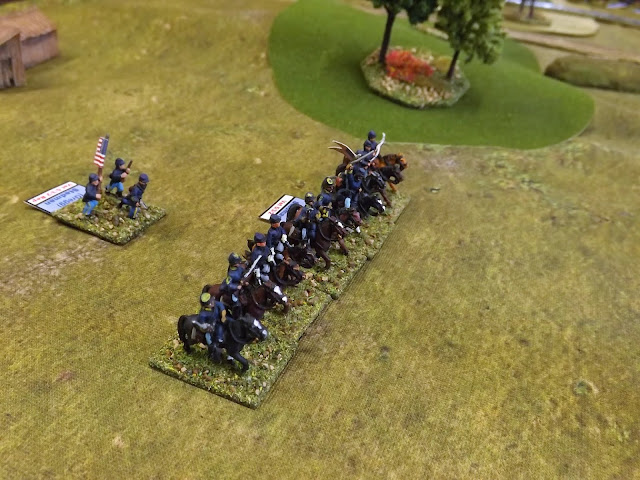 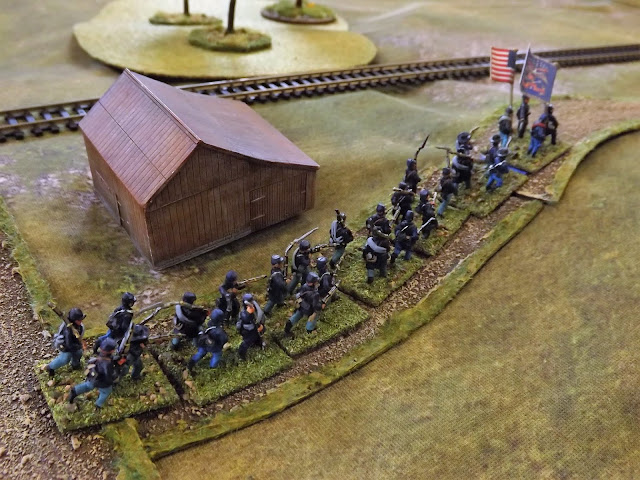 By turn 3 Heth had arrived and his Division started to take up position on the right of the Confederate line with the artillery forming up in the centre. Smyth’s Brigade seeing these developments stopped their march and turned to defend woods on the Union left, two cavalry units in the rear mounted up to assist. 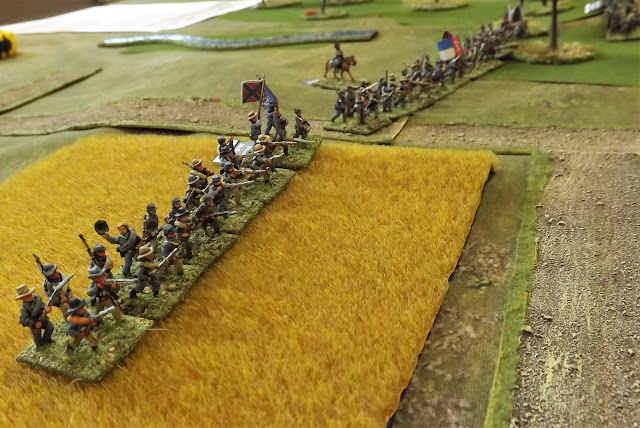 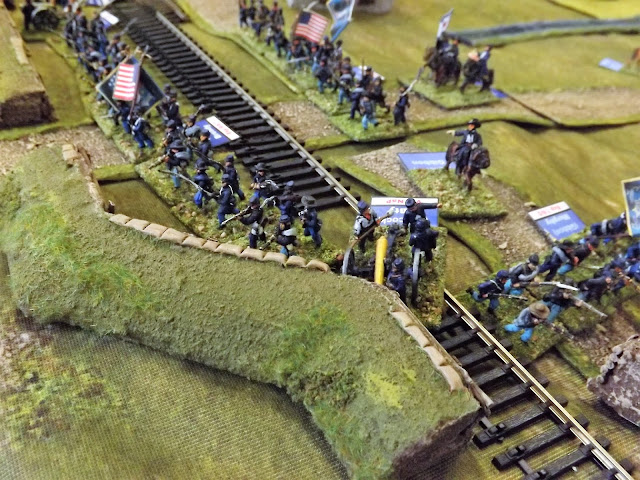 Turn 4 saw Hampton's dismounted cavalry arrive down the road from the extreme right which drew the attention of Smyth and the two cavalry brigades on that flank. These units fought it out until the end of the game with the Union cavalry repeaters making a telling difference. 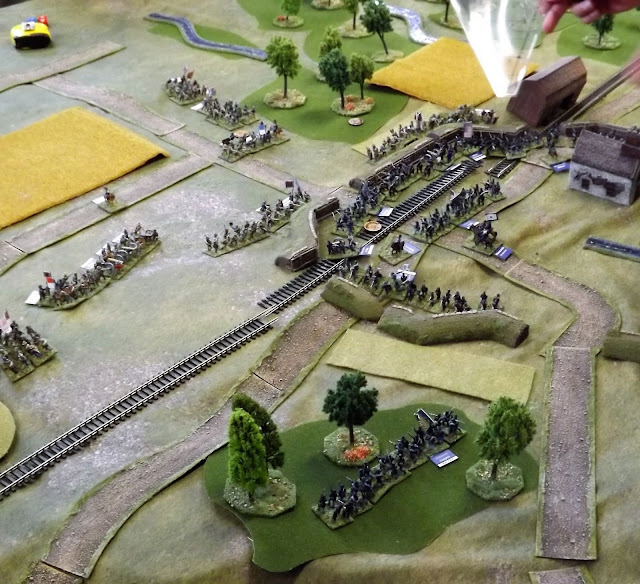 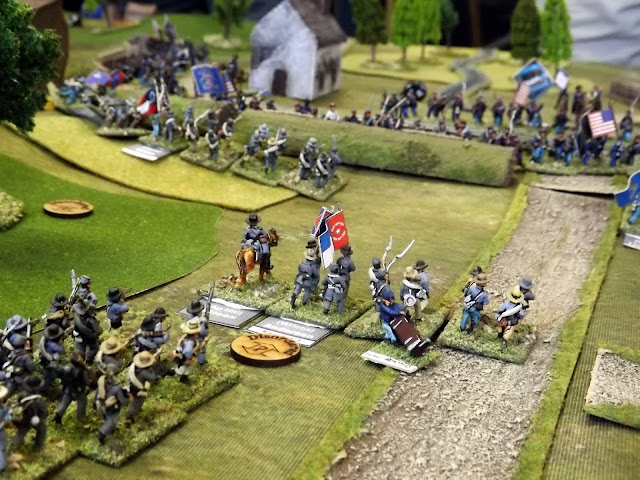 By turn 6 the Confederates were ready to try again with Heth assaulting from the right and Wilcox again attacking head on. With so many targets the Union forces couldn’t stop them all especially Heth’s fresh division who smashed over the walls breaking through Murphy’s Brigade, Wilcox’s battered division with help from Weisiger's on loan Brigade finished off Broady’s stout defence and had a breakthrough charge into Rugg’s fresh unit. Despite being Green against Crack they stopped the weakened Confederates and pushed them back. 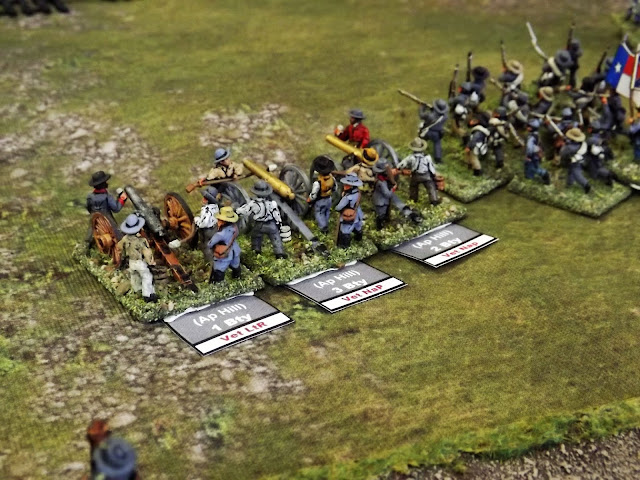 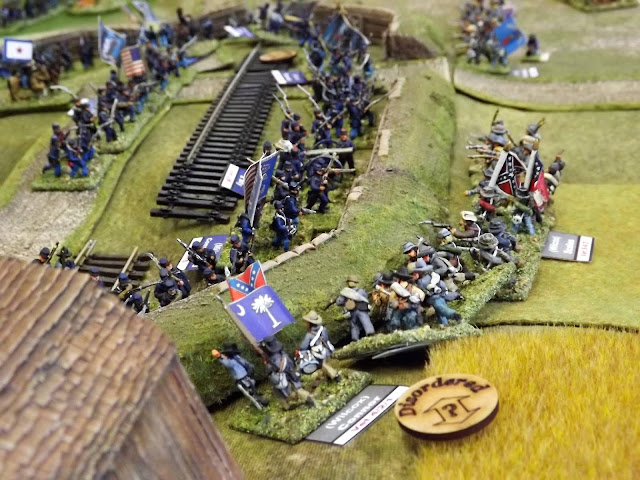 Steadman’s cavalry who had been held on picket duty out on the Union right had been released by Wilcox’s first assault crossing the railway line and quickly moved around to join the action, their repeaters could crumble the Confederate left and combined with Lynch’s fresh brigade which was advancing alongside them, looked like they could be a serious threat. Fortunately the only repeating they did was repeatedly missing everything in sight. 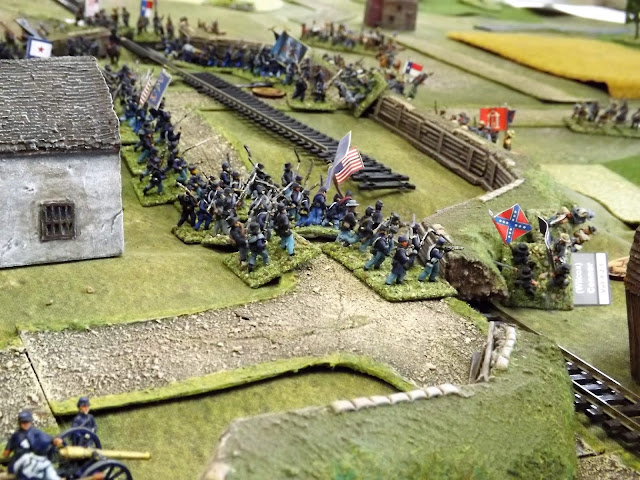 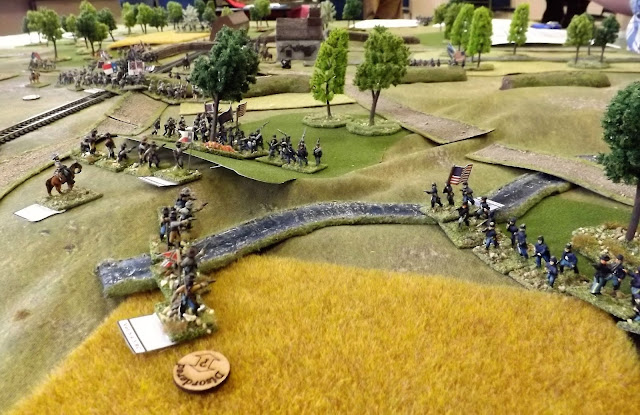 By now both sides had lost sufficient stands to reach the Heavy Casualties condition (Union 13 stands 20%, Rebs 19 stands 30%) and the Union having lost slightly more became the side with Greater Losses, both of these events had an effect on all future manoeuvre dice rolls (-1 for Heavy and -2 for Greater). 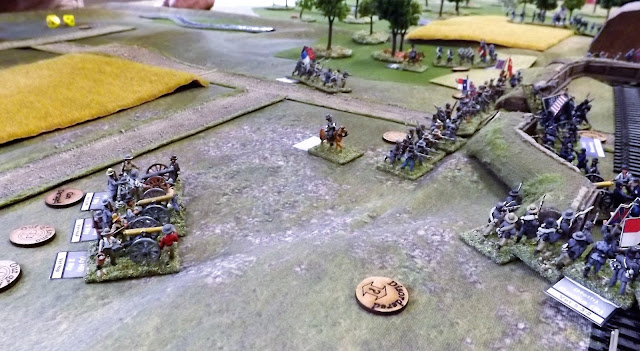 Smyth’s Brigade still fighting out in the woods got caught between Hampton’s cavalry and one of Heth’s brigades and were broken as well. 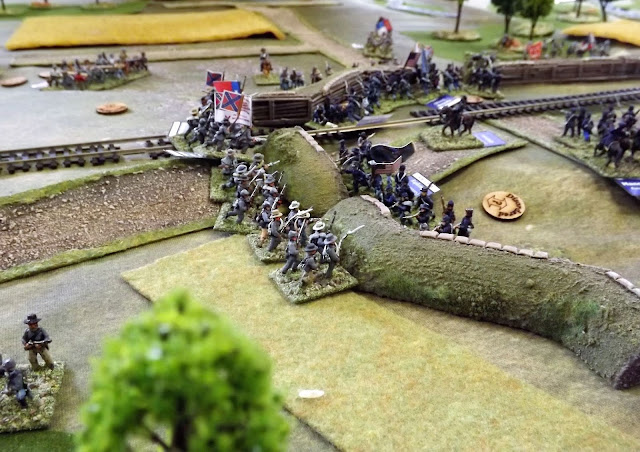 With the Confederates over the walls in strength, Greater losses and only two fresh brigades, the Union forces retreated as per real life. 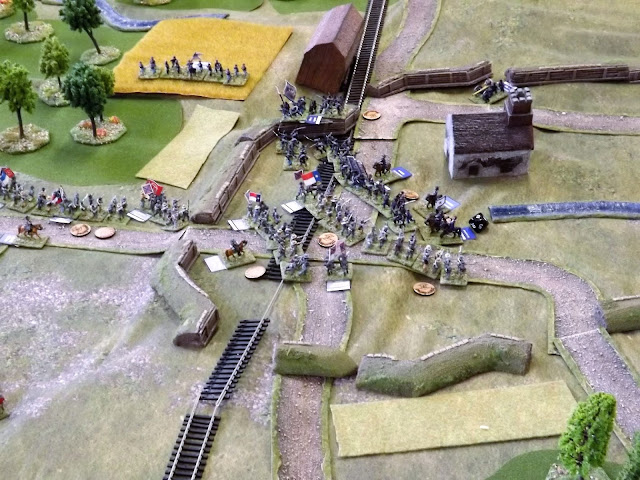 The scenario is quite well done and I would recommend it to be played. 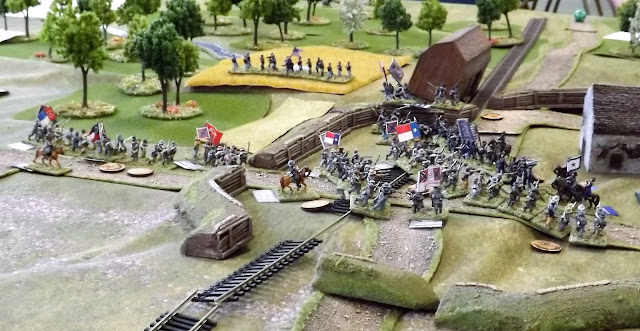 As for the rules, I think when I briefly flicked through them on an earlier visit I labelled them Regimental Brigade and Fury, now after playing them I think that’s unfair. I am not a fan of Regimental (i.e. will play them but never buying a set) and v2 Brigade has improved on the original by taking the best out of Regimental and weaving them into Brigade, the rules are noticeably still very much Brigade Fire and Fury and have been improved sufficiently to make buying a set worth while (if you can find any). 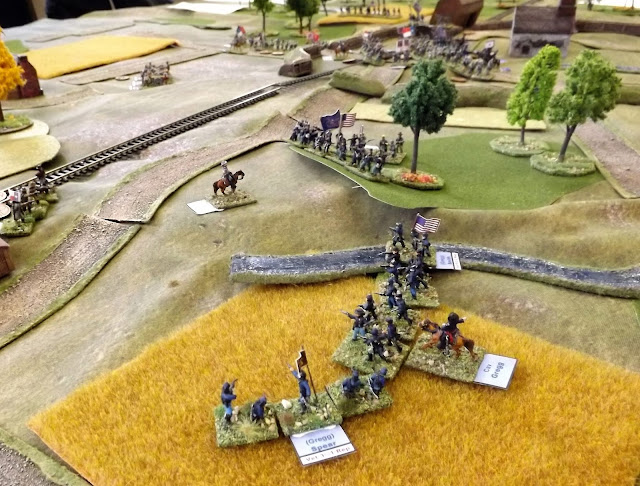 As I mentioned above, Steve did a rough outline of the differences for the players and which I have copied below: 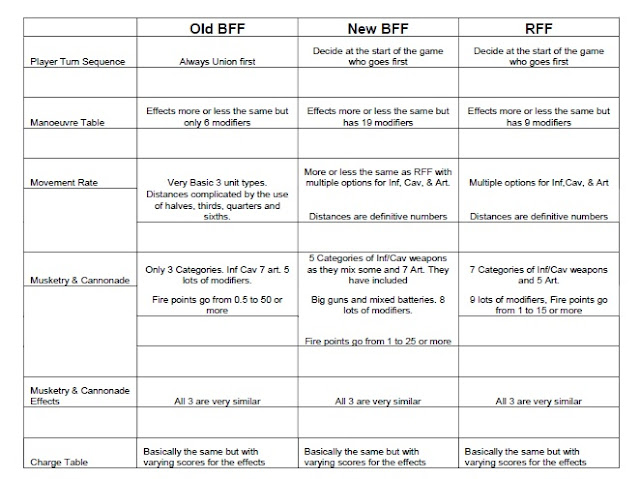 From my memory only, the charge /shooting table is different in that it follows Regimental more than the old set as it depends on the target troop types for the effects (Green, Vets etc), which is OK, and I did like the more visible ability to adjust your brigade effectiveness when setting up so that not all similar sized Veterans automatically get the same three scores, This can be used to reflect tiredness or temporary poor morale/dissatisfaction etc. 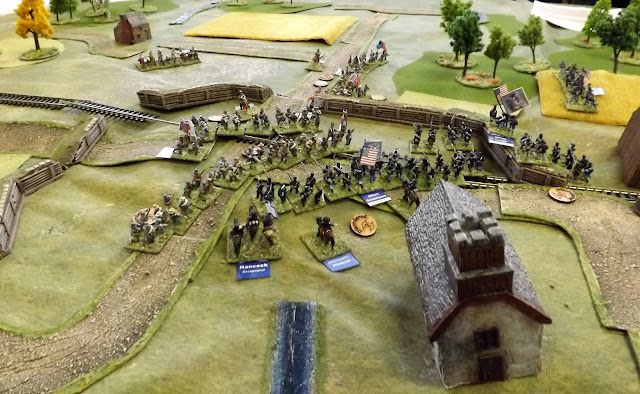 Overall, my impression was positive and will try and get a set once they become available again.

This has been a Mr Steve production.
Posted by carojon at 09:50