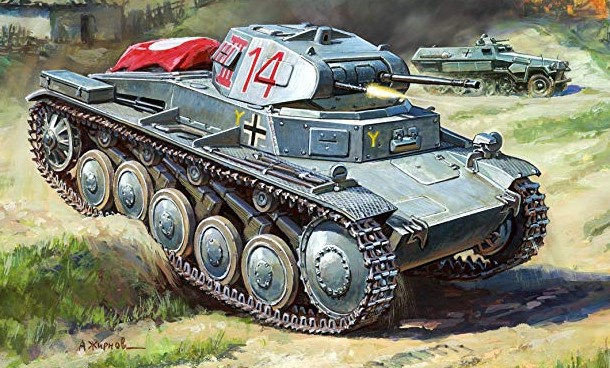 Leutnant Christoph von Rall looked up from his bowl of Erbswurst as shouts of alarm were heard. The Amis were attacking! He rushed over to his Panzer IIC and heard Oberleutnant Roth shouting to
advance and engage the enemy infantry. As the German infantry ran forward he ordered his driver to
advance. Gunfire came from the treeline ahead and German soldiers fell under a hail of machine gun
fire. 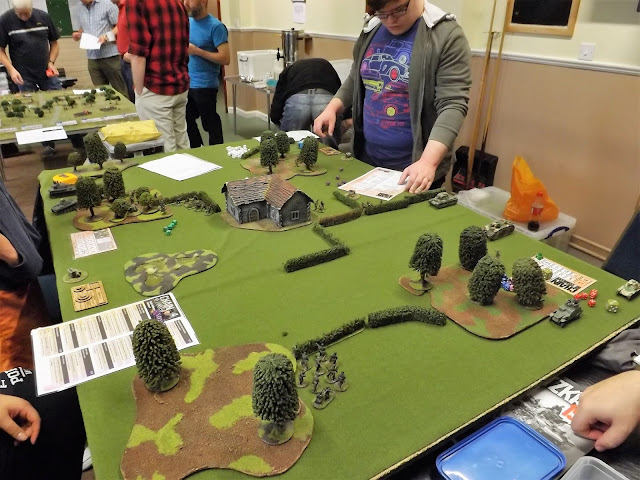 Following the release of the Chain of Command 1940 supplement I put on a game using the lists
from the book. The scenario was a meeting engagement. The Germans had a four squad platoon with a Pak 36 anti-tank gun in support, plus a mixed Panzer platoon of a Panzer 38t leading a Panzer IVC
and a Panzer IIC. To counter this the Allies had a French platoon of three squads with a Hotchkiss MG in support and a mixed Armoured platoon with a Char B1 in command, leading an R35 tank plus the British had sent along a Matilda II and a Morris CS9 armoured car. One major difference in the forces was that the German and British vehicles all had radios but the French did not, restricting the benefit of the French senior leader. I expected this to make a difference, but as things turned out it had little bearing on the game. 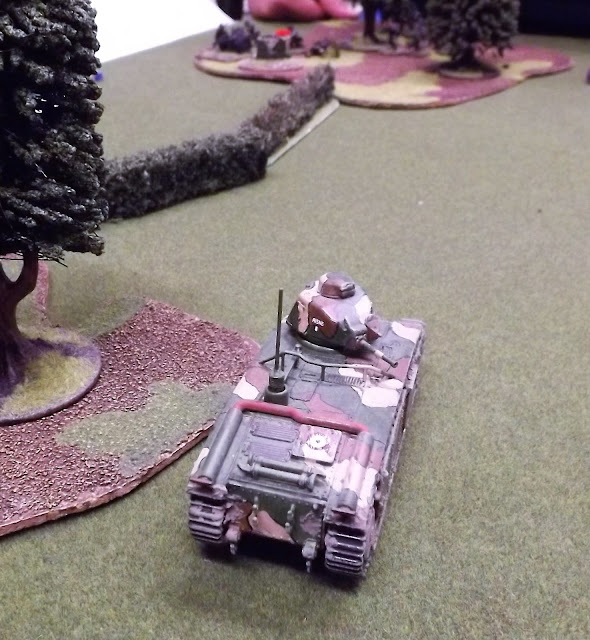 The French pushed all their infantry up on their right flank, relying on the armour to hold the left and
deal with any German tanks. The Germans deployed their forces evenly spread, with the Panzer IV
and Panzer II engaging the French infantry while the Pak gun and Panzer 38t engaged the tanks. 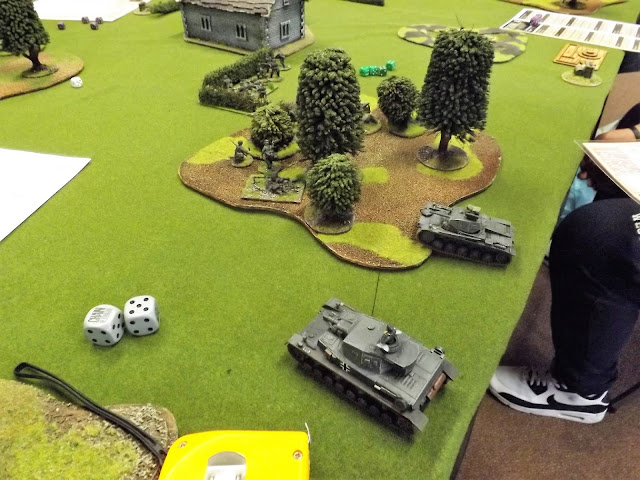 The Char B advanced in the middle of the table and was quickly engaged by the Panzer 38. The
German gunners aim was good, but the heavy armour of the Char deflected the shot. The French
tank commander then returned fire and the Czechoslovakian tank was no match for the French gun,
exploding in a ball of flame. First blood to the French and a significant loss of morale and command
for the German Panzer platoon. Meanwhile the Pak was firing at the R35 and Morris car on the
French left. The R35 shrugged off several hits but failed to return fire with any effect. The Morris was fired at once and promptly retreated behind a wood, where it stayed for the rest of the game. The
early loss of the German panzer senior leader completely wiped out their radio advantage. Oh well,
never mind. 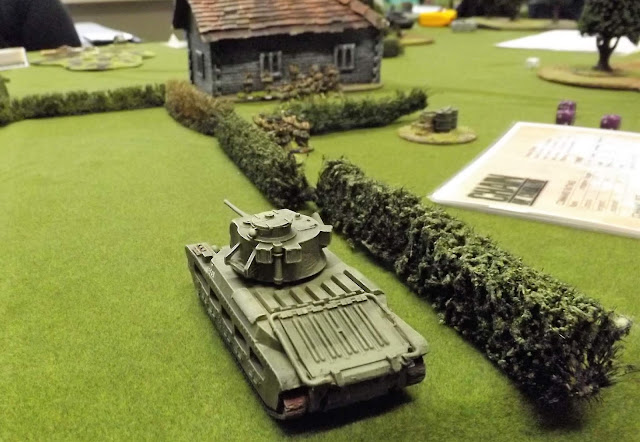 On the French right things went well for the French initially. Sustained fire from two squads and the
Hotchkiss MG were effective in pinning two German squads as well as inflicting some casualties. The German infantry were struggling to get an effective response, until the Panzer II and IV arrived and started laying in accurate and effective fire. The two Panzers were very cautious of the Matilda II
loitering nearby, but managed to cause a significant amount of shock on the French infantry. 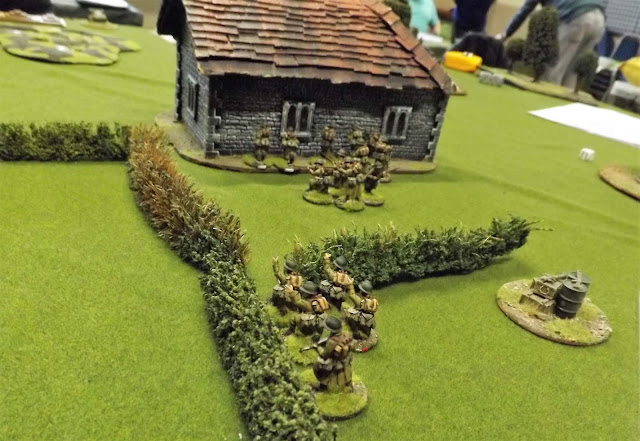 The fortune switched to the Germans when the Panzer commander decided to advance both his
tanks as fast as he could. The Matilda managed to hit the Panzer IV and kill its gunner, but the
Panzer II sped into the wood and drove straight over a French section. Despite only having three shock they failed to get out of the way and three men were crushed under its tracks. The Matilda II advanced and fired at the Panzer II, missing wildly. Then the Panzer drove off again, hitting another section of French infantry. These only had two shock on them, so surely they would get out of the way! Not so, a roll of '1' saw the French soldiers stand in amazement as they Panzer bore down on them, crushing a further six men under its tracks as it drove past the Matilda. A double '6' roll gave the Panzer another roll and it barrelled on towards a very battered unit. With too much shock to get moving these were also overrun and another four men fell. 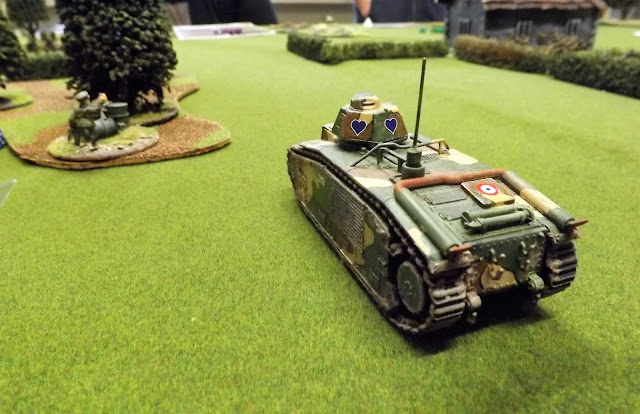 The Matilda turned its turret and finally reacquired the Panzer II as it drove away. A beautiful rear
shot would put paid to the impudent little tank. Or not. the British gunner was obviously shaken by
the blood strewn sides of the Panzer and his shot missed, not by much but by just enough. The
Panzer II turned and fired back and, despite only have an AP strike of '3' against the Matilda's armour
of '7', he shot it through a vital spot and destroyed the British heavy tank. 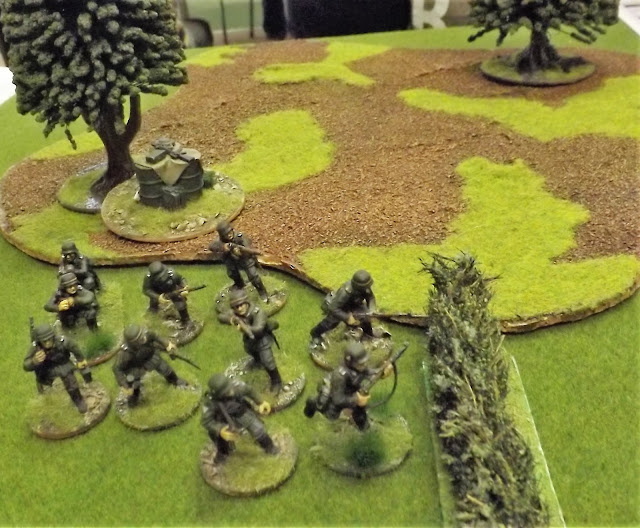 On the left flank things were stationary as the Pak and R35 fired at each other while the Char B tried
to kill off the German infantry in the wood. All the focus, and most of the command dice, went on
the right flank. 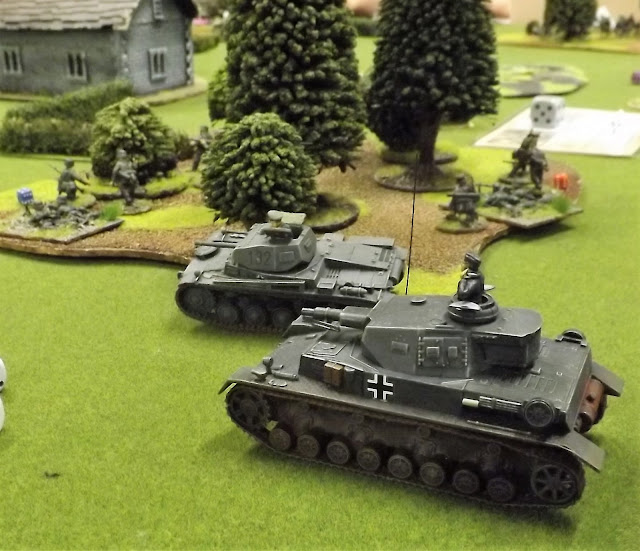 The loss of so many men, including two junior leaders, from the French infantry platoon was enough to break their morale, so the Germans held and drove the Allies back in disarray. The Germans were
not unscathed with both platoons having lost several morale points, but the French had lost too
many to hold. The Panzer II was the overall champion of the battle with a Matilda II and seventeen Frenchmen falling to its mighty 2cm gun. 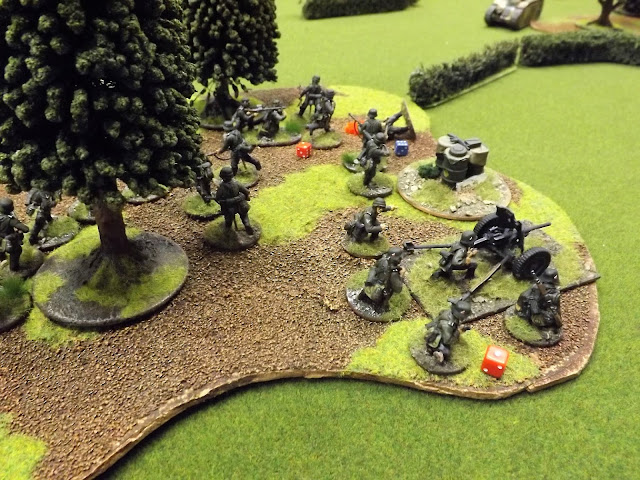 Thanks to Charlie, Chris, Colin and Ollie for playing in the spirit of the rules. Hopefully they enjoyed
it, I know I enjoyed umpiring and watching. 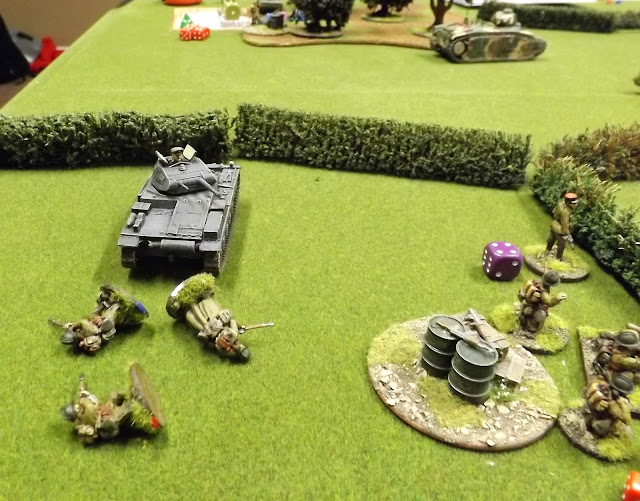 Christoph climbed out of his turret amazed that he had survived. As the infantry gathered around his
tank cheering he looked back along the path of his tank and saw the dead infantry next to the
smouldering British tank. Beyond that he could see his commanders shattered and burning Panzer
38. Who knows, maybe he would get promoted.
Posted by carojon at 13:37