The Battle of Pelennor Fields - War of the Ring 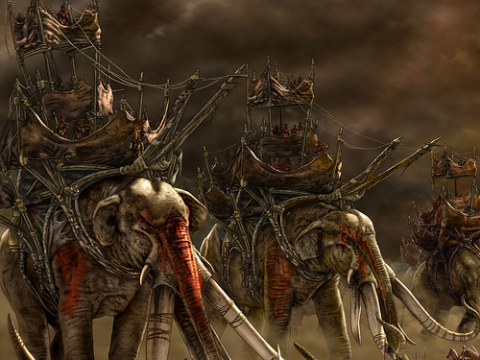 The Year is 3019 and the date is March 15th in the Third Age of Middle Earth and the War of the Ring is reaching a climax as Sauron, Lord or Mordor launches the full might of his forces against Gondor, before the walls of the great city of Minas Tirith that would become known as the Battle of Pelennor Fields.

The Devon Wargames Group tends to focus its gaming activities very much in the historical gaming section of the hobby, but every now and then, it's fun to broaden the diet into the fictional, fantasy, science fiction area and so we have featured other fantasy and science fiction genre games before; but yesterday thanks to Mel, Lee and Jamie who travelled to the club all the way from Trowbridge in Wiltshire, bringing their amazing collection of Lord of the Rings models and terrain, a few of us were able to enjoy a really spectacular rendition of this very special part of the fantasy gaming part of the hobby as seen below.

Additionally it is worth remembering that Professor J.R.R. Tolkien, the author of Lord of the Rings and an expert philologist, steeped in the knowledge of the languages and stories of Anglo Saxon, Norse, Finnish and other major language groups and their traditions, from which he created many of his fictional themes, also indulged in a bit of wargaming in his time, no doubt encouraged by another legendary name in the hobby, Brigadier Peter Young, see the link below.
https://vintagewargaming.blogspot.com/search/label/J.R.R%20Tolkien 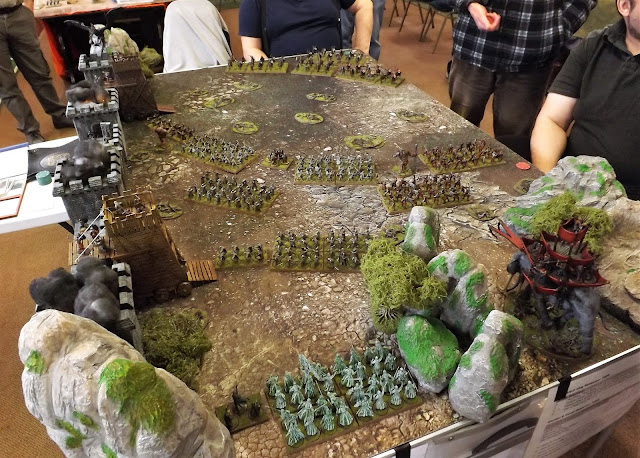 Our table for the day was a real feast for the eye, with the walls of Minas Tirith under heavy assault, with siege towers in place and the defenders struggling to repel breaching parties of orcs and trolls as the Witch King swooped over head casting spells of despondency and terror among the defenders.

Just as the Witch King was preparing his exclamation that 'the time was his', with an impudent cock, crowing in the background, to announce the break of day, the forces of Mordor became aware of the sounding of many battle horns as the 6,000 strong Riders of Rohan rode on to the battlefield lead by Theodan King, extolling his men to ride forth and crush the foul creatures of Mordor that lay before them.


The rules we were using for our game was the initial rule set launched by Games Workshop back in the day which I bought for my two lads Tom and Will when they first got interested, following the films.

I remember at the time thinking what a good set of fantasy/wargaming rules they were and was surprised to find many years later, when I looked at the GW offerings again that the whole concept of massed battles, which is what Tolkien is all about, had gone and the focus shifted almost to a skirmish level of playing the battles, which I and I think many other traditional gamers find very unsatisfying


So when I saw we were going to use this rule set for our game, together with a few added home rules for better group play-ability, I jumped at the chance of reacquainting myself with them. Not only that, but the sight of lovely terrain and beautifully painted figures, done by Mel, in large multiple warbands of thirty two figures in the case of the orcs, really captured the film like appearance of our smaller section of the battlefield and really added another level to the game as a whole.

My command for the day was a little known Ranger called Strider to many of his acquaintances, but Aragorn to those in the know, and his companions Legolas Greenleaf, a Sindarin wood elf and son of the Elven King Thranduil from Mirkwood and Gimli son of Gloin, a dwarf warrior from Ered Luin in the Blue Mountains.

Alongside them four companies from the Army of the Dead keen to make amends for their previous dishonour in a past life and sworn to support the returning King of Gondor.


Aragorn and his comrades would sit out the first turn of our game as Theodan led his Riders of Rohan onto the battlefield as the forces of Mordor turned to meet the new threat, all the while still fighting hard to cause the city to surrender. 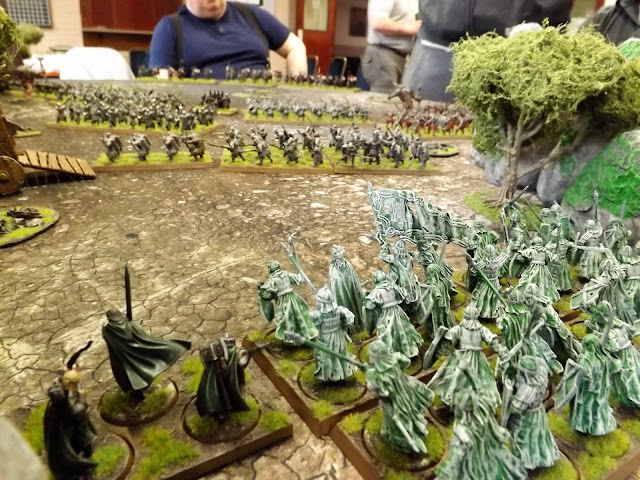 On another wing of the battlefield the forces of Sauron also had another force at hand timed to arrive soon after Aragorn's entry, in the rather large form of a Mumakil, quite capable of crushing friend and foe alike if not carefully directed to where its enormously powerful presence was needed.

Thus our table was set up to refight the climactic battle, in fact the largest battle of the War of the Ring that, with luck, if luck you call it, would see the return of the true King of Gondor.


Our battle began with the classic charge of the Rohirrim as multiple groups of armoured horsemen crashed into the serried ranks of orcs and supporting trolls, gradually gaining the upper hand, though without loss and driving the Mordor hoards away from the city wall as the flank was turned onto its supports.

As the Rohirrim pushed the orcs back a new threat entered from the left as Aragorn led Gimli, Legolas and the Army of the Dead up from the banks of the River Anduin to be met by more orcs supported by archers who did a steadfast job of holding back this new threat before Aragorn finally managed to overcome the archers, though suffering the disappointment of seeing the dead struggle to overcome their orc adversaries.

Overhead, the Witch King did his best to sow despondency and terror among the ranks of Rohirrim and Gondorian warriors, but it seems that rumours of women and hobbits among their ranks was causing him a little concern - fools, didn't they know that this was his time! 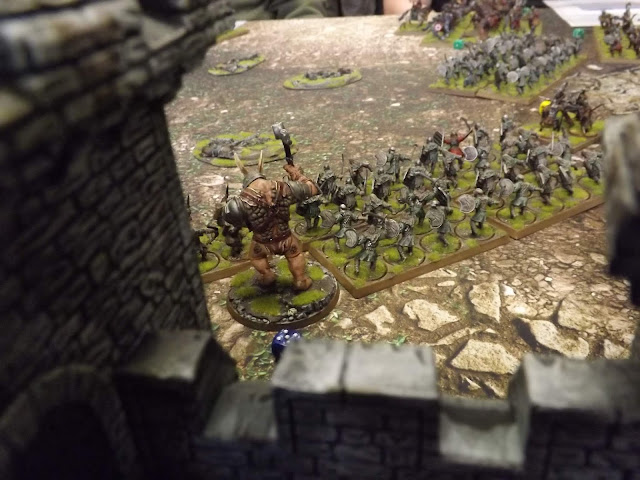 As the orc horde reeled under the attack of the Rohirrim, disaster struck as Theodan King went to join his father in the Great Meade Hall and command shifted to Eomer, just as their ranks were bolstered by a charge out of the gates of the city by Prince Imrahil leading forth the Knights of Dol Amroth in full battle panoply.

Surely the battle was lost to Sauron, but still his minions kept on fighting and the dead and wounded grew in numbers littering the battlefield in heaps of sorrow and misery.


Just when it seemed all resistance from Mordor was hopeless on rolled the lumbering Mumakil crashing towards the Knights of Dol Amroth in an unstoppable charge, just as Aragorn cleared the group of orc archers before him leaving his path clear to launch a charge of his own with Gimli and Legolas in support of the Swan Knights.

Aragorn died as he would have wanted with Anduril, the Flame of the West, his famous sword reforged from the shards of Narsil in hand, alongside his companions from the fellowship setting too among the crewmen of the howdah atop the Mumakil and with Gimli and Legolas causing the beast to roar in pain as great gashes were rendered upon its hide amid multiple hits from Legolas' bow.


With the beast roaring in pain and pierced by the first strikes of knights and their lances, it careered off through the serried ranks of Rohirrim and Orcs still contesting the battlefield leaving a trail of death and destruction in its wake.


A fitting and climactic end to our game and straight out of the annals of the Red Book of Westmarch that came down to the Men of the West via the Anglo-Saxons of Wessex who settled around the city of Escanceaster, known today as Exeter, the county town of Devon.


Great fun had by all and many thanks to Mel, Lee and Jamie who travelled a long way to bring their collection to the club and provided a lot of fun with the game they produced, which all involved enjoyed thoroughly.

As someone planning to visit Sir Peter Jackson's Pelennor Fields, among other places created in the film, later this year, I know I will carry memories of this very fun game during my trip.