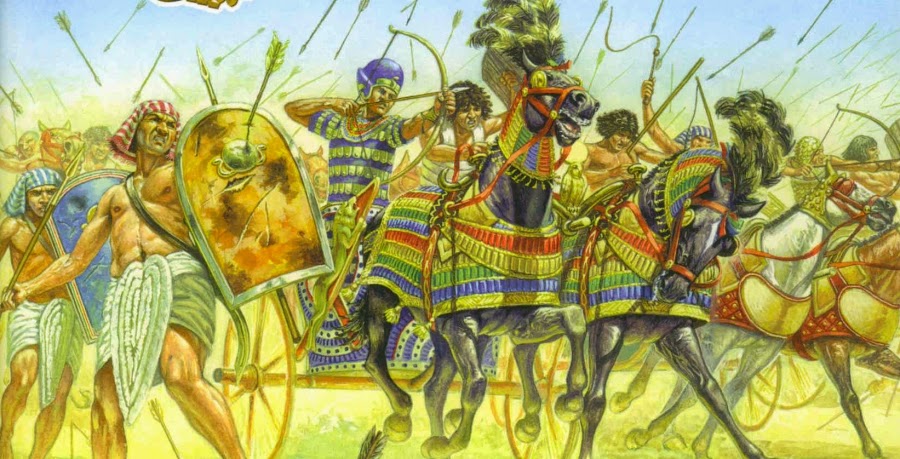 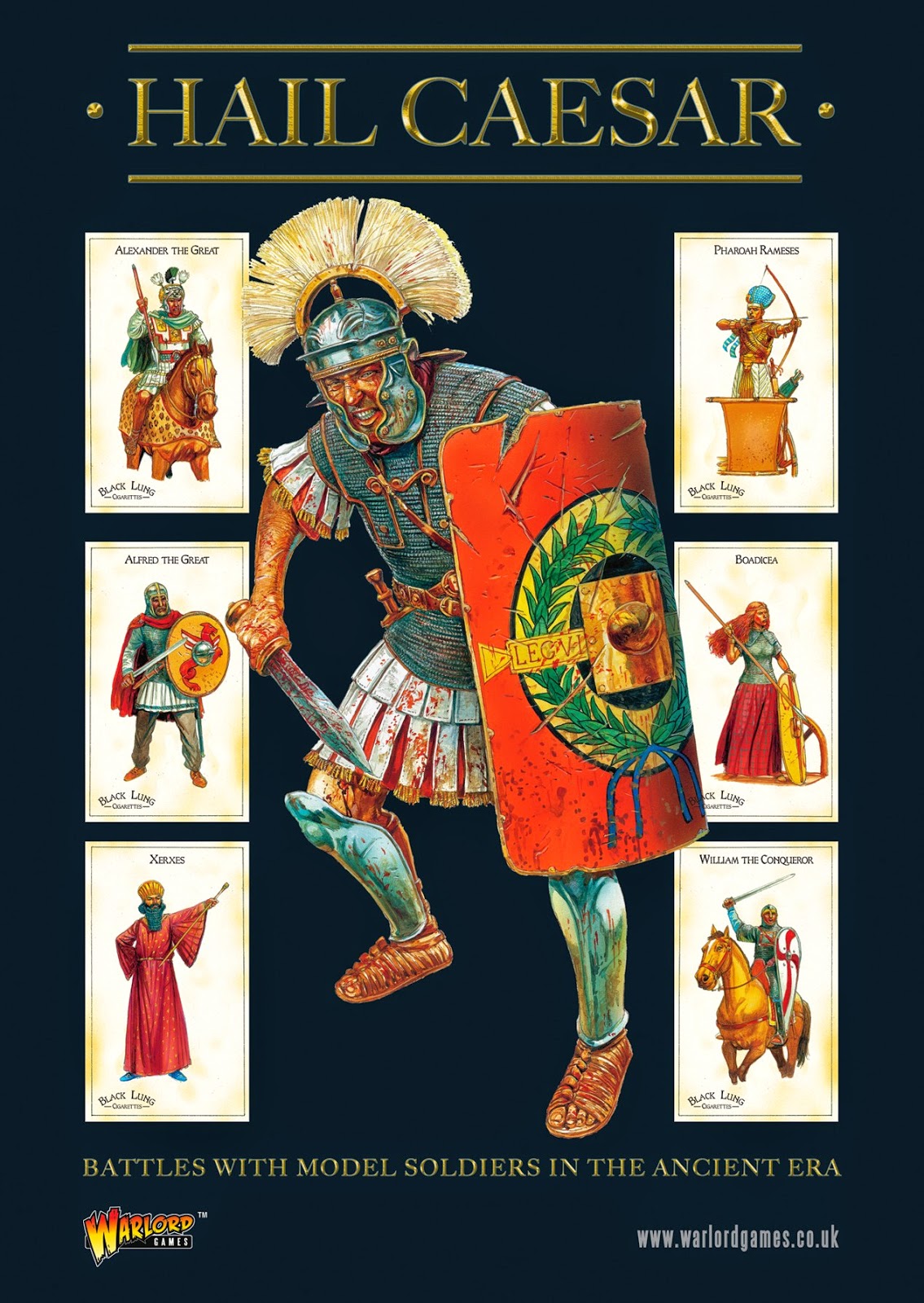 September's club meeting had two games hosted by members with the one I played in being a a Hail Caesar affair run by Steve H, featuring his lovely collection of New Kingdom Egyptians and Sea People.

I have included two versions of the AAR mine (Egyptian) and Steve H, aka "Mr Steve" (Sea People in italics) as we played on opposing sides. So they should make an interesting comparison, a bit like one of those game reports you use to see in the "General" Magazine. I'm probably showing my age there, most people under forty don't know what that is!

This was to be only my second game of HC and with my own growing collection of Ancients starting to get going, I am very happy to get in on a bit of Spear and Shield play when the opportunity presents.

JJ - The game was set up as a straightforward get stuck in action and although we Egyptians had an initial plan of turning the right flank, refusing the left and pinning the centre, events caused a slight change to this initial strategy, but in spite of things it eventually went pretty much that that way, although my younger son, Will, leading a division of Sea People managed to upset things on the Egyptian left.


SH- Pouring out of the north the mighty Sea People hordes swept away the Hittites who dared to stand against us , then we swept into Palestine overrunning the Canaanites along with many others before finally sweeping into Egypt ; now all this sweeping had made it rather dusty so it came as a bit of a surprise when we suddenly found our way blocked by the Pharaoh and his assorted rabble.

JJ - With both lines set up the Egyptian forces made a steady advance to the centre of the table looking to anchor their line on a piece of rough terrain in the middle of the table with the Pharaoh leading his chariots further round on the right.


SH - The Egyptians formed up with their chariots and Nubian archers on our left, massed Spearmen made up the centre and the bulk of their archers were all on our right. This rather obvious plan was countered by the cunning Sea people general who cleverly split his army into 3 equal sizes and then outlined to his generals his brilliant strategy , all 3 divisions were to run very fast towards the enemy and then hack them to bits. Having successfully carried out this exact same strategy in every previous battle since the beginning of our invasion, this would certainly be the last thing that this new foe would be expecting us to do.

And it almost worked.

JJ- The first clashes came from the Egyptian right flank and centre as both sides skirmishers caused some early casualties. The chariots went boldly towards the Sea People warbands in open order looking to join in the skirmish battle and promptly got themselves caught failing to evade the mass of sword waving infantry losing about a third of their number.


SH - As is normal with Hail Caesar some divisions on both sides were a little tardy in getting going and we had the fun also of a couple of blunders but generally things soon came to a head and arrows raced too and fro between the two sides, strangely on the Sea Peoples right hand side our one heroic light archer unit was repeatable causing frequent casualties whilst the massed Egyptians archers couldn’t hit the proverbial barn door with whatever you hit barn doors with (barn door abuse is wrong and should be stopped , can you spare just £2 a month ?)

This part of the Egyptian plan wasn’t working. 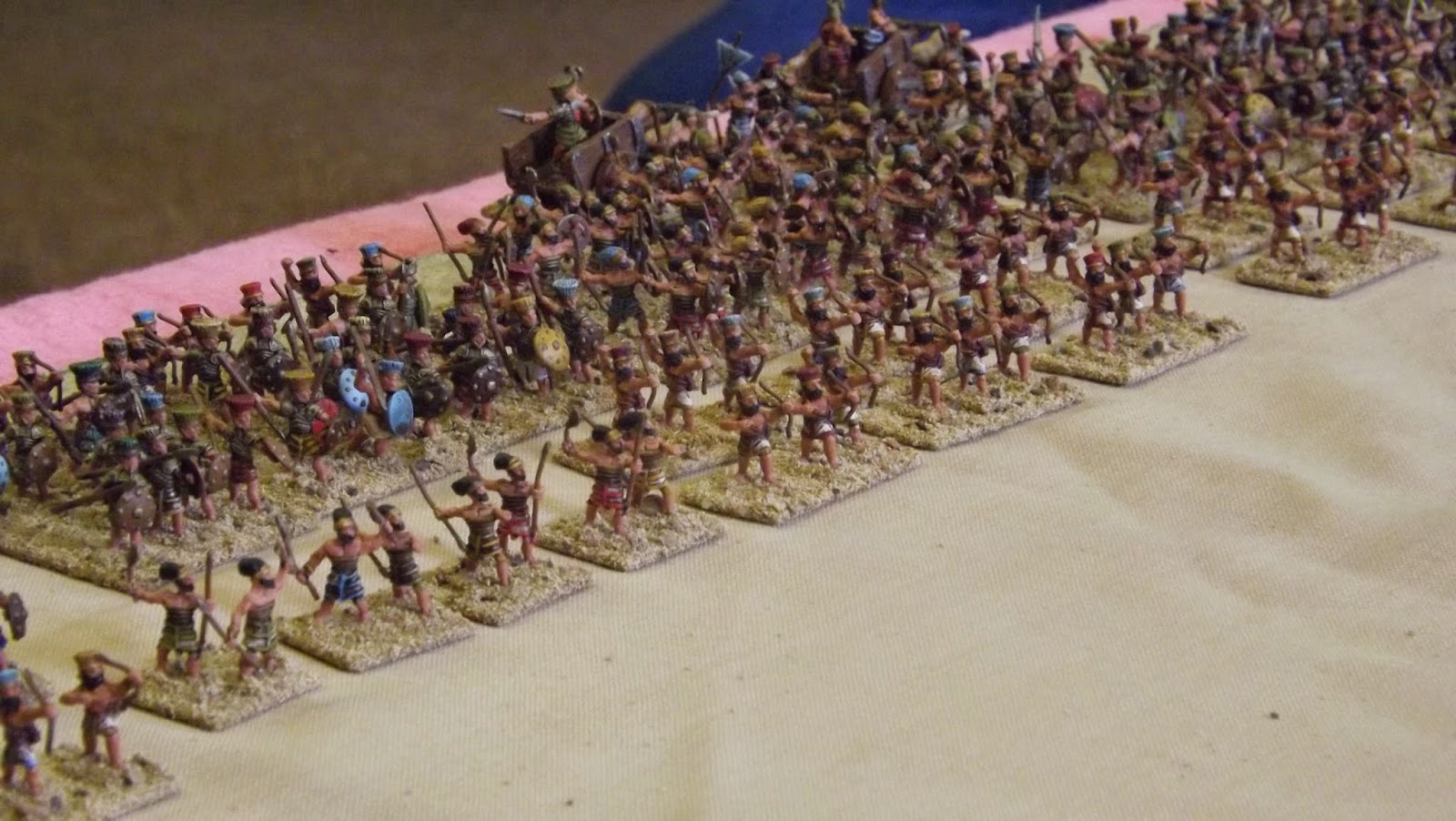 SH - Similarly on the left the chariots dashed about , advancing and withdrawing as per their plan , leaving the plodding Sea People warbands stumbling around looking foolish as they merrily ran rings around them , that is until we successfully threw for a three phase move and caught all the front line chariots as they evaded.   Hah!!

JJ - Instead of a sweeping right hook the Pharaoh was conducting a desperate rear guard as he fell back trying to avoid any further crippling casualties  whilst wearing down the enemy enough to counterattack. 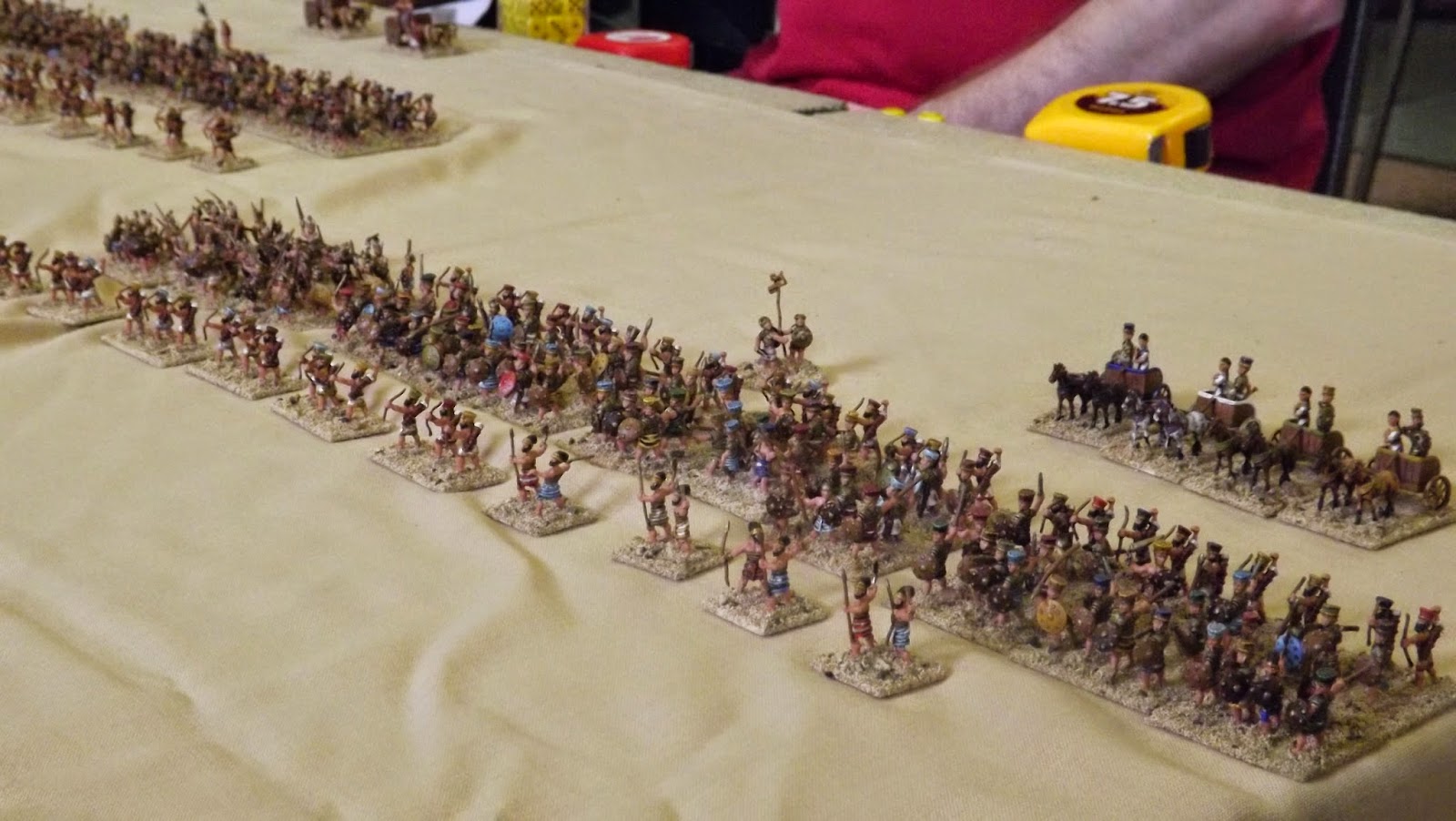 JJ - With all the action going the wrong way to my right and little threat to my left, as Will was taking an age to negotiate broken terrain in his front as he attempted to close on our lines I dressed my ranks of spearmen and marines preparatory to charging in on the massed warbands ahead. Sadly for my front units the Sea People got the drop and making use of the CinC's ability to re-roll command dice promptly managed three moves to beat me to the charge.


SH - Things were looking good for the Sea Peoples on both wings and then the two centres clashed in a mighty …. Er …. clash.


JJ - With screaming warbands closing in, my spearmen braced themselves for the fury of the initial crash when it came. I was on the wrong end of eight hits to my centre unit only causing about five in return. However the Dice God was with the Egyptian host this day and I promptly managed to save seven of them causing a drawn fight in the middle of my line and although losing the fight to my left the division of archers coming up in support would soon stymie any advantage gained.

SH - Then they saved better than I did and we lost.

JJ - Oh come on, a lot more interesting stuff happened than that. (I added this later)

SH - What, not enough? Ok then , both centres then desperately hewed at each other for turn after turn with the advantage switching first one way and then the other, each side teetered on the edge of cracking as their units got gradually worn down and eliminated  (exciting isn’t it?), With both sides having three units shattered it was going to be a close run thing to see who would break first but finally all the remaining units in the Sea Peoples centre were shaken at the same time so a compulsory retreat was forced on this division, The Egyptians themselves being only three points away from the same result .

As good as warbands can be, Medium spears can slug it out in a longer fight as they are good mutual supporters.

JJ - The left of the Egyptian line was focused on bolstering my division in the centre as, with the initial shock withstood, it enabled the Egyptians to take the fight back to the Sea People warbands. Meanwhile the Pharaoh was starting to get a hold on the fight on his front and had arrested the enemy advance with some good shooting from his chariots and supports.

SH - On our left the remaining Egyptian chariots were now holding the Sea Peoples and had switched from doing doughnuts to actually getting stuck in so had stabilised that side.
On the right the rough terrain had badly hindered this Sea People’s division from closing in on the combined archers which made up this flank but they did have some success with their own rampaging chariot unit causing mayhem but it was not enough.


JJ - As the initiative gradually swung towards the Egyptians the right and centre fights settled into a battle of attrition as both sides sought to cause the other to break first. Certainly on my front the Dice God kept faith with the true believers and, despite a few close calls, kept coming up with huge saving rolls when they were needed and some big punches in between that saw first the Sea People centre break first, followed by their left flank.


JJ - However both sides forces were completely spent and it was then that Will started to smash his way into the Egyptian left flank with his own chariot teams causing mischief. Our plan had been to refuse this flank but under our own initiative not the enemy's.

However the day was done and the narrow win was declared Egyptian, although too many wins like that would brake the Kingdom!

Figures:
Sea People: mainly Magister Miltum with a few
Egyptians : the bulk of the army is old minifigs, my very first proper army when Mr Steve was just plain Steve and there were no such things as home computers or the internet, tell that to the kids today and they won’t believe you. These will never suffer the indignity of being re-painted due to their high sentimental value but mainly as that old enamel is a bugger to shift . The rest are new Minifigs which I bought at a Bring and Buy somewhere.

All figures on loan with kind permission from the Mr Steve collection.

Many thanks to Steve M, Steve H, Steve L Ian and Will for a great game with lots of laughs and highlights.