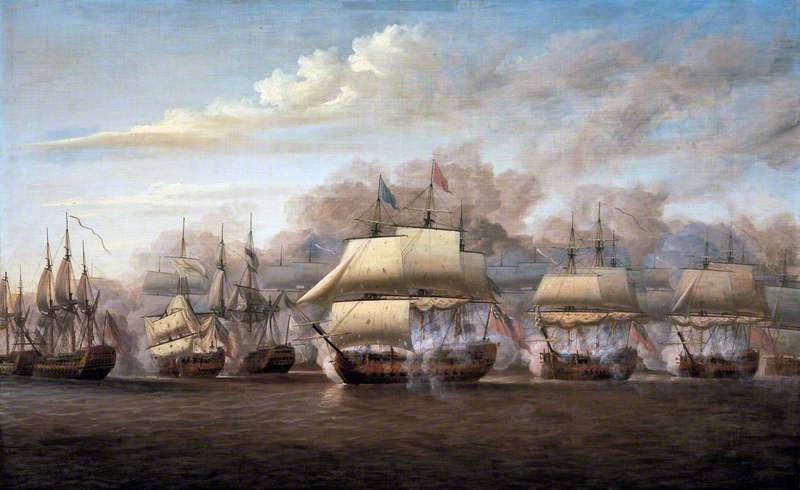 Yesterday gave me the opportunity of giving my Suffren & Hughes collection of ships a run out as we played through the Battle of Providien. This game follows on from the Battle of Sadras, 17th February 1782 which we played back in February last year.


As with the Sadras game I was using the "Eight Bells" app on the Ipad to moderate the game together with the ideas on signalling to the fleet covered in "Kiss Me Hardy" both covered in the previous post. I took further inspiration from fellow DWG member Eoghan Kelly and his great article "Indian Ocean Frolics" covering this and the other battles in the campaign published in "Wargames Soldiers & Strategy" magazine issue 63 which is available as a PDF from Karwansary at £3.90


The Battle of Providien came about after Admiral Hughes' fleet was spotted by Suffren escorting transports and supply ships. Several days followed with the British successfully avoiding action as they made progress towards their base at Trincomalee, Ceylon, modern day Sri Lanka.


However Suffren was not to be denied his battle and the two fleets came to action off the coast of the island close to Providien which gives its name to the battle. As at the Battle of Sadras, Admiral Suffren had the wind gauge, but both commanders were painfully aware that the wind was blowing on shore and the low water reef line was a reminder to both commanders of the risks of grounding.

As the French fleet closed on the British, Suffren signalled his ships to load chain and shoot for the rigging. In the game I gave the French two signal cards in the deck with just one to the British. This reflected the command ability enjoyed by Suffren compared to Hughes. A simple order could be sent to the fleet on the turn of these cards.

Because of the command superiority of the French admiral, their ships opened fire before the British admiral was able to signal his fleet to do the same. The British commander decided to rely on his better trained crews to fire ball at the French hulls, and both sides settled down to pummelling each other at close to musket range.

With the variable movement rates generated by Eight Bells, both fleets struggled to maintain their lines, and with ever increasing damage to rigging and masts, plus shot up wheels, rudders and the occasional fire to be extinguished, various ships occasionally started to fall out and drift down wind towards the reef.

Eventually a gap appeared in the French line and with the British ships signalled early in the battle to increase sail to "All Plain", The British were able to get slightly ahead and turn the French line at its head. Both commanders signalled "Fire as she bears" and both sides got stuck in at close quarters.

With the British slowing due to damaged masts and rigging, the French changed to round shot at the hull, but the continual pounding from the British had caused much damage to their ships and crews and French fire was struggling to damage the British ships, With the heads of the lines coming to grips Le Flammand was grappled and boarded by the Monarca. When the British got onto the French upper deck they found only the dead and the dying, following the terrible pounding suffered under the British cannon. The lower deck was also quickly taken and the 64 gunner was taken as a prize.

Thus our game ended with what looked like a marginal win for the British with their capture of Le Flammand, being eclipsed by the loss of their commander and his 74 gun flagship, C'est la guerre.

Thanks to Tom, Steve H, Steve L and Ian for a very entertaining afternoon in the Indian Ocean, with much fun had by all. The Eight Bells app whist providing a fast fun alternative to dice and record keeping is showing its need for an update as it seems to lock up occasionally on ISOS 8, which was a bit frustrating, but didn't stop the game.
Posted by carojon at 09:34