The Wild Geese, a Tribute Game - Winter of 79, Living on the Front Line

Thanks to Chas for running an entertaining game based on the movie "Wild Geese", to "Wild Geese -
Life on the Front Line Rules". Any resemblance to the real life activities of "Mad" Mike Hoare was
entirely intentional.

The scenario covered the final act of the Wild Geese movie, with Burton, Moore and Harris racing to
the jungle airstrip, in order to get the injured president Limbani onto the waiting Dakota and thence
to a safe country. Needless to say, they and their mercenaries had to fight the pursuing Simba rebels
every step of the way. 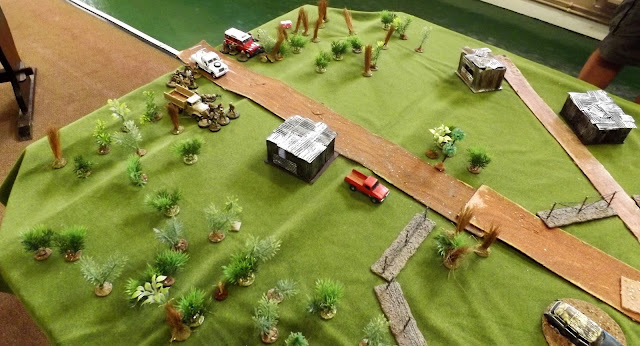 Scene One saw the Wild Geese in three vehicles racing down the jungle road, whilst rebels fought their way through the jungle to intercept them. As Richard Burton's force neared the airfield, a Simba
checkpoint and attendant blockhouse came into view. Richard Harris's squad in the lead truck raced
to crash the barrier and were brought to a shuddering stop by an rpg shot that injured one of the team. The squad debussed and brought the blockhouse under fire.

With Simba troops closing on the road near the rear Landrover, Richard Burton ordered his 4x4 to
halt and deployed his squad and their mmg to provide covering fire. This took the pressure off the
vehicle with Roger Moore and President Limbani in it and they were able to race on down the road. 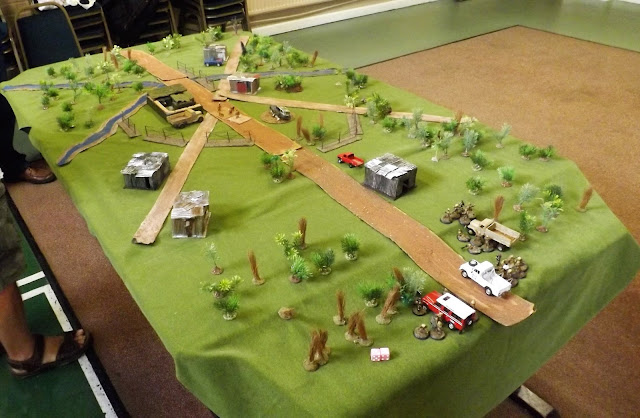 A desperate struggle developed round the checkpoint and two mercenaries were killed, before Richard Harris could storm the entrance. His Uzi spoke, killing the men in his way and he lobbed a grenade into the guard room, with devastating results (you could tell he was no bit part player).

Burton's squad and the mmg were cutting swathes through the rebels behind the column, but the
jungle near the road block was alive with Simba militia and the men in the blockhouse managed to
stop Richard Harris in his tracks, with an injured rebel forcing him back (I don't think that scene
made the final cut).

As the blockhouse was finally taken, Roger Moore raced past the checkpoint toward the bridge over
the river. One Simba rebel had a line of sight and a lucky shot took out a tyre on the Landrover,
bringing it to a halt. Chaos ensued as mercenaries scrambled out of the vehicle, dragging the injured
Limbani into cover.

Having star billing, Richard Burton was alive to the situation and ordered his men back into their
vehicle, before driving to the president's aid.

Burton's Landrover arrived at the blockhouse, screeched to a halt and stalled. Burton, his squad and
the mmg debussed to provide covering fire. Roger Moore jumped into the vehicle and desperately
tried to start it. As he cranked the engine, the mmg and the FN's of Burton's men cut down a newly
arrived Simba squad.

Rebels appeared in the jungle on the other side of the river and a fire fight with Harris's men developed. 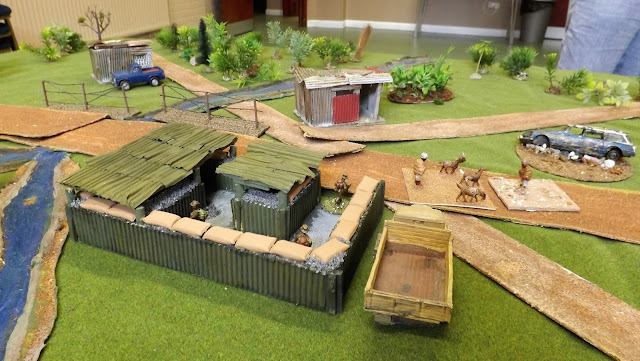 As Limbani was loaded into the remaining Landrover, Harris used his "Tactical Insight" special ability to keep his squad firing, as he rushed over open ground to a parked Simba truck. Once there he
dived on board, started the engine and drove to the blockhouse (At this point Richard Burton was
seen on the phone to his agent, shouting about who had the bigger part). 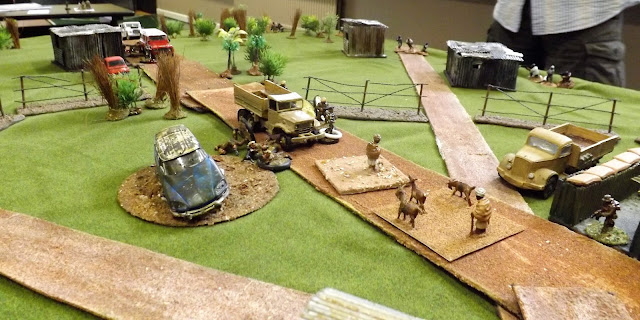 Reckless driving by Roger Moore, saw him cross the bridge and avoid the hail of fire from the rebels.
He screamed to a standstill by the Dakota and ran up the steps to to take his place in the pilot's seat,
as his men stretchered the president on-board. 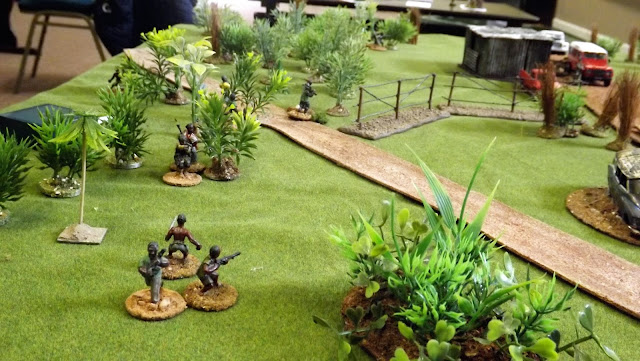 Seeing Limbani had made it to the plane and with Simba militia closing in from all sides, Burton
ordered the rearguard to retreat by squads, with the mmg crew abandoning their gun and climbing
on Harris's waiting truck.One soldier was killed as he ran from the blockhouse and another covering
the retreat was also felled. 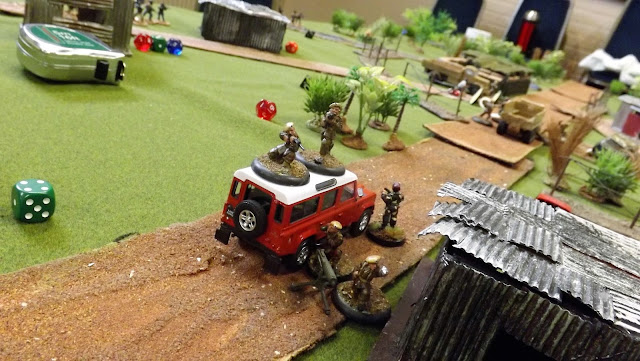 Harris and his remaining men on the truck raced over the bridge and onto the runway. Now there was only Burton and his men left to cover the rear. 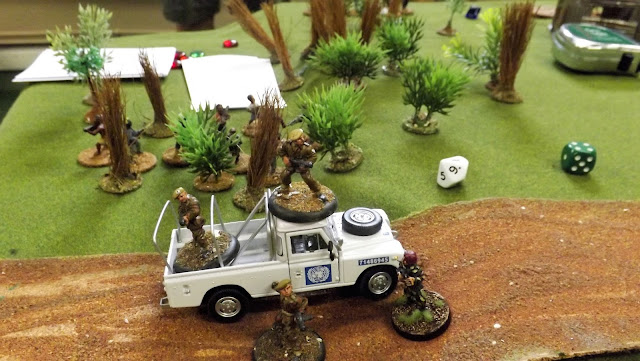 Harris and his men boarded the plane, as a rebel tank (a 10+ event on 2D6) tried to smash its way to
the road through the jungle. Also a "technical" mounting a DSHK came into view of the men in the
blockhouse. Burton didn't remember this from the script, but quickly recovered his senses and ordered his men over the rear wall of the fortified position. 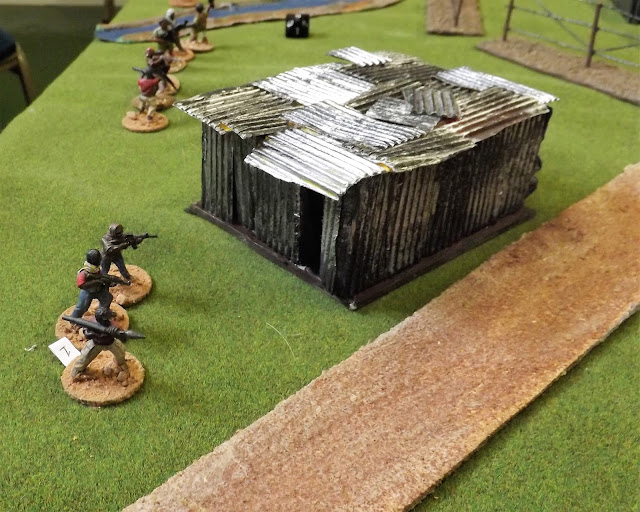 A brace of shots from one of Burton's men saw the technical's engine shot out, but a mercenary fell
to Simba fire as he crossed the river. 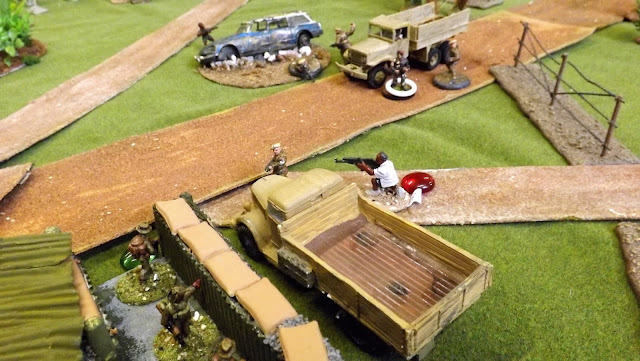 Meanwhile, back at the plane, Roger Moore sent his bazooka team (who had done nadda so far) to lie in ambush, waiting for the clanking monster currently making its way onto the road. 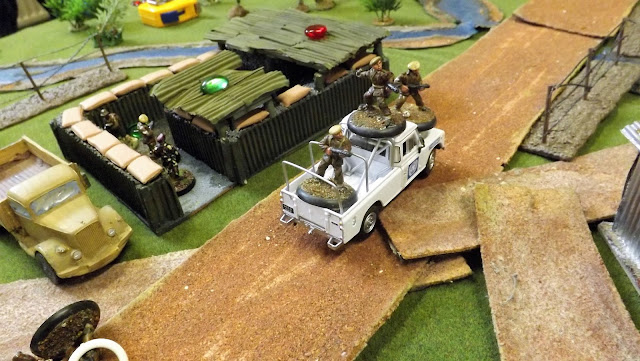 As the tank turned onto the airstrip the bazooka fired, hitting it. The smoke cleared, but the tank was untouched. Raising an eyebrow, Roger Moore gunned the Dakota's engines and took off. 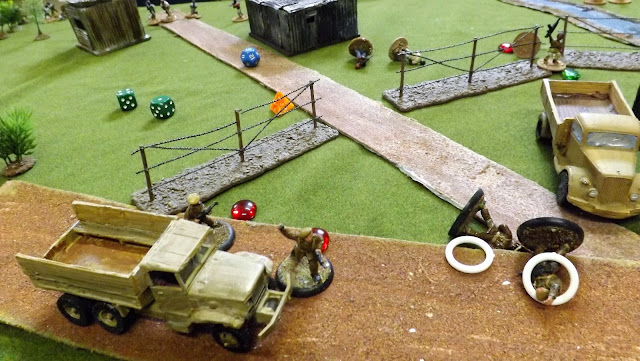 Cut to scene of Richard Burton and his men staring up at the plane, as it climbed into the clouds, the
word "RAFER !" frozen on Burton's lips. 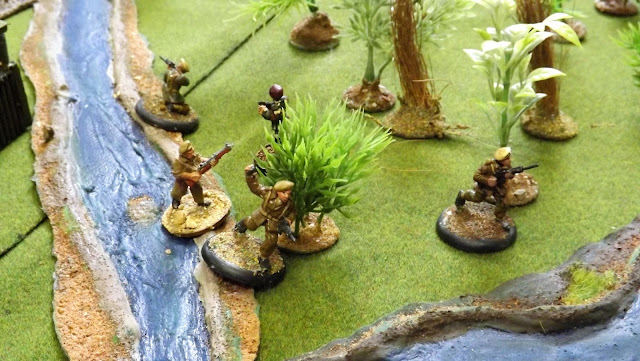 Her Majesty's Government wishes it to be known that, whilst it had no part in recent events in Zembala, it is pleased to hear that that President Limbani is safe and well in a third country, following a rebel attack on his motorcade. 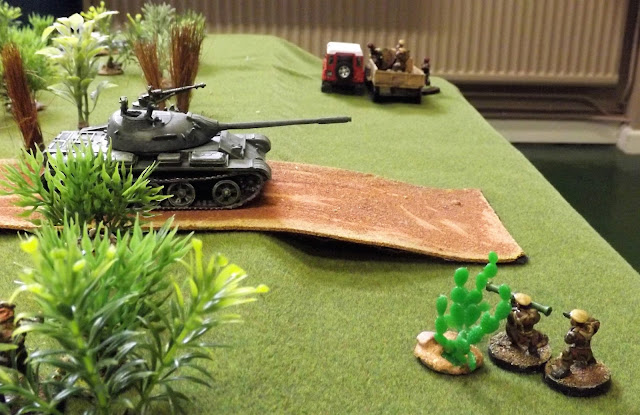 Through the offices of the United Nations, the British government will continue to press for the
release of a number of British citizens employed by President Limbani, who are currently unlawfully
detained by Simba rebels. 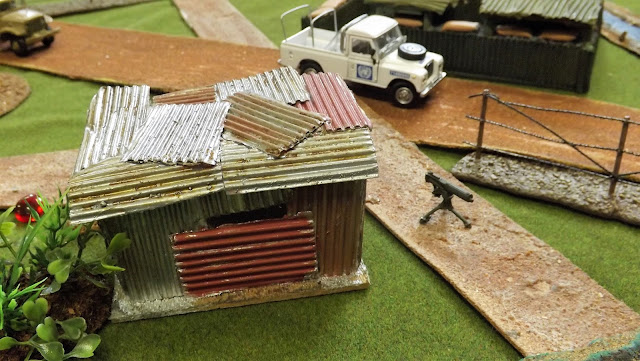 Many thanks to Chas, Si and Steve H, who played the game in the spirit it deserved.