This month, seventy-three years ago on the 18th July 1944 saw massive British and American bombing attacks on German positions south west of Caen that heralded the beginning of Operation Goodwood spearheaded by three British Armoured Divisions 7th, 11th and Guards as General Bernard Montgomery attempted to use his tanks to overwhelm the German defences and break out on to the Bourguebus Ridge behind the city.

The controversy over this battle has raged ever since the attack came to a close on the 20th July 1944 with one side declaring the operation a massive failure when considering the aspirations of the attack to breakout from the Caen area and the territory gained for the amount of bombs dropped and the tanks and their crews lost in the battle.

The opposite view would point to the liberation of Caen, the considerably fewer British casualties when compared to the huge losses in infantrymen suffered during the previous Epsom campaign at a time when tanks were easily replaced in days, but when Britain was straining to maintain the strength of its infantry divisions after five years of war.

In addition the supporters would point to the fact that the attack continued to hold the remaining German armour front and centre around Caen and indeed caused significant damage to the reserve formation 1. SS Leibstandarte; allowing the success of Operations Cobra and Bluecoat to be the campaign turning battles that they were, once the limited German armour on those fronts were overcome and indeed the three British armoured divisions would be in the forefront of the Bluecoat offensive.


The fact is that General Montgomery, a rather polarising individual, attracted as many opponents as he did supporters and his pronouncements about his aims for this attack and the gains made were always likely to be a subject for much dispute in an era when the egos of the commanding generals were often much bigger than the conflict itself. 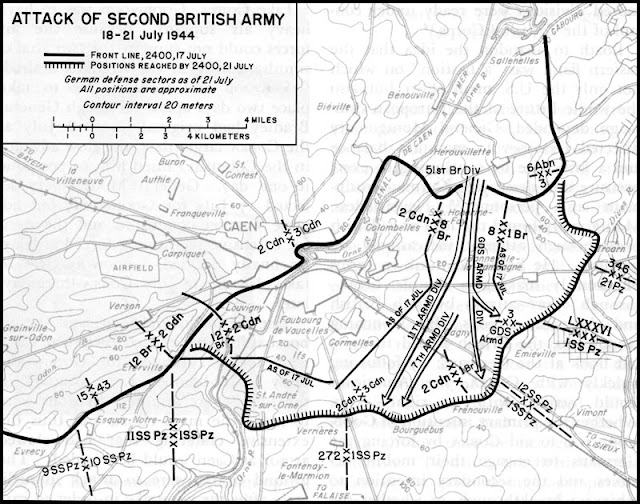 From a personal perspective Goodwood holds memories of my father's involvement in the battle as a 19 year old OP sergeant in the 55th Field Regiment, Royal Artillery, Guards Armoured Division and many holiday trips to France and Belgium in the 70's.

He recounted the memories of moving out through the fields of high standing wheat and using the machine guns on the OP tank to check out the closed terrain for pockets of enemy troops.

The few accounts from my Dad were brought to life in 2005 by the late Ian Dalglish's book, Over the Battlefield, Operation Goodwood, which marries the accounts of those involved with the aerial reconnaissance photographs taken at the time as the battle raged below. 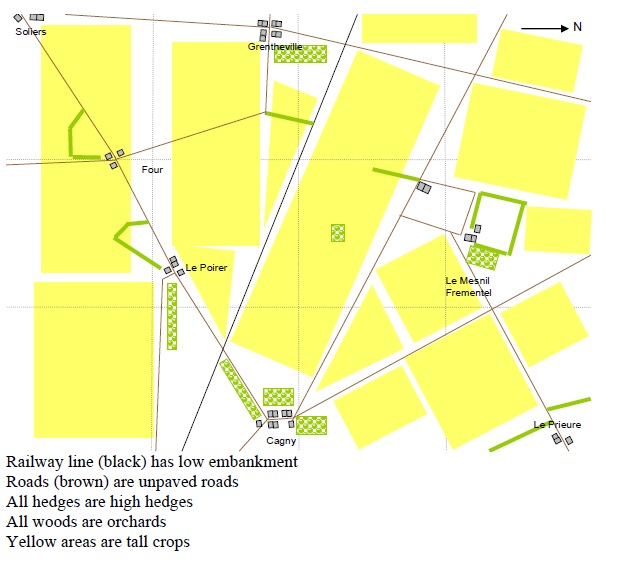 So on to our game which saw us marrying a scenario by Steve Uden (see the link above for a PDF of the scenario) with the rules we chose to try out, namely the third edition of Dave Brown's "Battlegroup Panzer Grenadier" rules.

Most of the time we tend to play at a lower level for WWII, namely "I Aint Been Shot Mum" and "Chain of Command" for Company and Platoon level games, but this scenario demanded a higher level set and so we decided to give these a go. 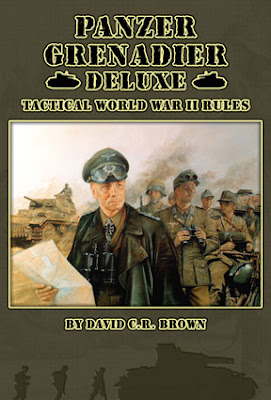 The table below is our interpretation of the map for the scenario which sees the spearhead armoured group from 11th Armoured Division, 2nd Fife and Forfarshire Yeomanry with its three squadrons of Sherman tanks supported by a 25lbr RHA field artillery battery and a company of armoured infantry.

The orders were straight forward enough, make a rapid advance though the German rear areas between the villages of Cagny and Grentheville and exit the armour of the southern table edge. Opposition was expected to be light given that the German line had been rapidly penetrated after the allied air-forces had done their stuff and it was important to consolidate well into the German rear area.


Of course the German defenders were by no means defeated or a 'light opposition' and the Fife and Forfars could expect significant opposition from 125th Panzer Grenadier Regiment, 21st Panzer Division with three kompanie's of panzer grenadiers supported by three kompanies of 'Becker' converted assault guns, lightly armoured but packing formidable fire-power with the Pak 40 75mm guns and 105mm howitzers. There mission, simply to knock out British armour.

In addition we chose to include, though there is much doubt as to them being there, the battery of 88mm Flak guns directed to bring their guns to bear on the British tanks by Major Hans von Luck himself, threatening their commander under gun point to follow his directions immediately. Whatever the truth, it makes a great story.

So with the table and troops all sorted we were off with the first two squadrons of British tanks entering the table with A Squadron moving into the bombed out ruins of Prieure to provide overwatch on B squadron as it advanced towards Le Mesnil Frementel.

As the British tanks cautiously approached the French village, German infantry were observed scurrying about among the buildings attracting a 'brassing up' from the tanks as they approached.

However the arrival of the British armour had not gone unnoticed and a serious 'stonk' on Prieure confirmed the fact to any doubters, with several tanks suffering light damage under the barrage of 'moaning minnies' and causing hatches to go buttoned.


With radio messages going between the two lead squadrons about the German infantry in Le Mesnil, the decision was made to bypass the village and press on to the railway leaving the area to be mopped up by the infantry behind.

As B Squadron advanced A  Squadron drove across their rear to support with a call out to the reconnaissance troop and their faster Stuart light tanks to press on up the road the Grentheville and alert the following sabre squadrons to any trouble up ahead.

The movement of the British tanks towards their right flank on to the Gentheville road caused a certain amount of congestion as two squadrons and a reconnaissance troop sought to press forward with tanks brassing up Le Mesnil as they passed by.

The congestion only attracted another nebelwerfer attack and the lighter tanks suffered considerably more damage postponing any rapid move up the road ahead.


The leading tanks erupted in flashes of flame and billowing smoke as crew fell from the sides of their vehicles into the wheat.

All was confusion as the radio crackled for a situation report, only to be answered by an ominous hiss.

With the killing zone entered, yet more German guns opened fire, with the infantry in Le Mesnil launching a desperate panzerfaust attack to get in on the battle.

Major von Luck drove into Cagny just as his grenadiers opened their battle with Fife & Forfars  B Squadron and by simply unbuttoning the flap on his Walther pistol holster, the Flak battery were about their business sending 88mm shells in among the British tanks.

With B Squadron practically gutted by the initial German attack, A Squadron moved through the smoke of burning tanks to open fire on the enemy vehicles observed in Le Mesnil.

As the two Beckers tried to relocate, the lead vehicle exploded as it took hits from a Sherman 75mm.

The Flak guns did their best to cover the Becker's in their retreat and poured on the fire from Cagny.

Now fully aware of the hold up in Le Mesnil and Cagny Colonel Scott commanding Fife and Forfars issued immediate orders to take the pressure off his leading squadrons.

The OP for the 13th Horse Artillery battery was ordered to get eyes on Cagny and deal with the 88's, with C Squadrons to be sent forward in support.

Meanwhile A squadron were ordered to take the lead from B Squadron, neutralise the Beckers in Le Mesnil and close on the railway an Gretheville.

The final order went to F Company, 8th Rifle brigade to send forward their mortar OP to bombard Le Mesnil and deal with the German infantry observed earlier, whilst standing by to support C Squadron tanks.


The Becker conversions, a typical German 'make do' option to support their infantry in Normandy, saw the bringing together of excellent German guns with lightly armoured early war French chassis captured in the Blitzkrieg.

The combination provided a mobile anti-tank/artillery support for the panzer grenadiers in the rebuilt 21st Panzer Division.


With the threat by the following British tanks to push on through Grentheville the next kompanie of Becker's revealed themselves on the outskirts of the village.

However the British tankers were on full alert to the threat and it was the German crews that took the first hits with the 105mm zug dispersed from the field.

Then the fire from the remaining 75mm zugs started to hit A Squadron as it pressed forward.

Some respite was granted when the 25lbr shells from the Royal Horse Artillery fell, right on target, as their OP directed the fire on the 88mm Flak guns observed on the edge of Cagny.

Taking full advantage of the threat removed from Cagny, C Squadron pressed on towards the village putting more fire on Le Mesnil as it passed.


Finally the first elements of the 8th Rifle Brigade moved up in support as the 3" Mortar OP drove forward to get a view of Le Mesnil.

With two hours of battle completed the British armoured attack was stymied on the railway line jousting with the remaining Becker kompanie in Grentheville.

Then just as C Squadron of the Fife and Forfars moved on towards Cagny the rear tanks were struck from behind as another Becker kompanie moved into Prieure in the wake of the British tanks.

The German attack was the last straw as far as the British attack was concerned and although the Rifles company coming up through Prieure took out a Becker with PIAT fire and threatened to overwhelm the others, the damage to the British armour had done enough, just as the third line of defence opened fire with two Pak 40's deployed in and around Le Poirer on the German base line.

Our table-top battle played out very much as the accounts seem to portray the actual thing, with the British tanks getting pummelled in the so called "good tank country" that typified the open cornfields south west of Caen. That said, once the German positions were identified then, with all that armour on hand, retribution could also be swift and permanent with the Royal Horse guns particularly useful in dealing with the threat from Cagny.

Looking at the damage sustained I reckon the Fife and Forfars could have probably got a couple of squadrons together with a bit of a recovery period to bring up crew replacements and deal with damaged but running vehicles, but were struggling to press their attack much further over the rail line right there and then as their orders required.

The rules played smoothly without too much looking up and, with experienced gamers around the table, very often confirmed what we had already thought should happen which was a good sign. This higher scale of game is not what I would normally play for WWII, preferring the lower level sets, but I like these for the larger game and am sure we will give them another go.

Thanks to Bob, Nathan, Mike and Si for a very entertaining game and it was nice to get my toys out for a change of period.
Posted by carojon at 19:30