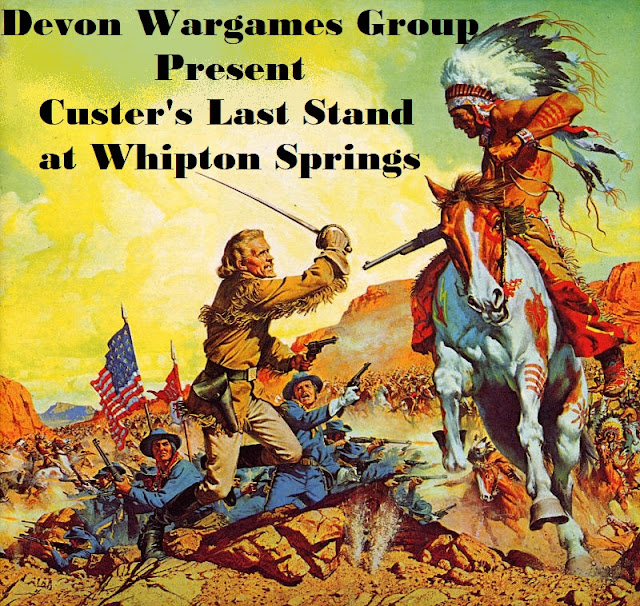 I can hardly believe another wargaming year is reaching its end but the fact that the club met yesterday to play the Gus Murchie memorial, end of year big club game, confirms that the wargaming for 2018 is just about over.

This year the club decided to mark the occasion with a Hollywood Style epic game and what better theme to pick than a classic Plains Indian War encounter with all the typical tropes you would expect to see in a 50's black and white epic with John Wayne et al leading the action.


Well instead of John Wayne we would like to introduce JJ in the role of General George Custer, Indian fighter and all round rash, devil may care, charge and keep charging cavalry commander ready to win the west with pistol and sabre in hand.

In the role of Sitting Bull we have a new and rising star in the wargaming firmament, Jones Junior or one of them, Tom,  playing the role of the willy, considered and equally determined native American leader ready to take advantage of that 'devil may care' cavalry leader with a typically thought through ambush scenario that would give our end of year game a nail biting clash to compare with any Hollywood blockbuster from the period.

Our game featured a group of trail weary settlers who, sold a real estate deal that was just too good to be true, had arrived at their new holding close to the river only to find out how 'too good' it really was.

If that wasn't bad enough, they now found themselves the unwitting bait applied to the hook designed to draw Custer and his men into the trap that would be known to history at the Battle of Whipton Springs.


Of course George Custer was not the kind of chap to be put off by a little drum beating and smoke raising and with white hat and charger rode off at the head of his eight cavalry troops ready to deal with Sitting Bull and his 'hostiles once and for all, and hopefully add yet more lustre to his name in the process.


As the long cavalry column entered the valley leading up to the springs, the drums suddenly stopped all was quiet apart form the gentle occasional clopping of horses hooves on stony ground, one might even say too quiet.

Suddenly Custer raised his hand to bring the column to a halt as he surveyed the ground ahead looking for any sign of what was likely to happen.

In the distance the circle of wagons could just be made out in the heat shimmer and just beyond the column a rather prominent group of rocks in the centre of the valley.

The General turned to his personal bugler and put him on standby to be ready to sound the charge on his command sending instructions along the column for the first four troops to be prepared to push on to the civilian wagons and for the other four troops to guard the valley behind them and keep their retreat route open.

Then with a wave of his hand the column resumed the advance.

As the column approached the furthest end of the rocks ahead firing could be heard from the rear, then the lieutenant commanding A troop drew the generals attention to Indian horse approaching the wagon circle just as the first shots rang out.


The rearmost troops had just received their orders from the general commanding when the senior major ordered the column to form line on the right and draw sabres.

Happy with the new formation the whole line advanced at a walk, then to a trot building up to a fast canter as the line moved briskly to engage the Indian war-parties that had just entered the valley to their right.


Meanwhile the front of the column also gathered pace as the general spurred his mount forward at the sound of the firing from the wagons ahead only to become immediately aware of mounted Indians either side of his party as they cleared the rocks to their left.

Not wasting time the general called to his bugler to sound the charge as he had previously instructed and with A troop shaking out into a prearranged arrow head formation the lead unit plunged into the oncoming Indian line.

The Indian attack developed all along the valley with the first serious exchanges occurring at the rear and around the wagons where warriors circled the settlers exchanging shots and with the occasional warrior breaking off to charge the wagons and attempt to jump into the circle to engage the busy defenders from within.


However, with ammunition dished out around and within the defences and with extra loaded rifles placed within easy grasp, each brave that managed to get into the wagon circle was quickly overpowered but not without the occasional casualty to the defenders; and with seemingly unlimited numbers of warriors this was a battle of attrition the settlers would struggle to win without rapid support from the soldiers.


At the rear of the column the cavalry closed quickly on their adversaries and after the first two rounds of close combat with lance versus sword and pistol the Indians were forced back only to see the soldiers reform and press them still further.


So far so good as the settlers and the rear troops dealt with and drove back the first attacks.

However the serious threat came first in the centre as the Indians surrounded the front of the column with Custer in the thick of the action, charging in and wounding the first brave who attacked him but loosing his sword as he received a lance wound in the thigh that would cause him to dismount and get aid.

Only to then have to draw his pistol and shoot dead another brave who charged in on the wounded general trying to take advantage of his discomfort.

As the general's bugler sounded the charge his final blast was strangled short as he too was felled fatally by a lance blow falling amidst the men of A troop who quickly moved to surround their general as blows were exchanged. 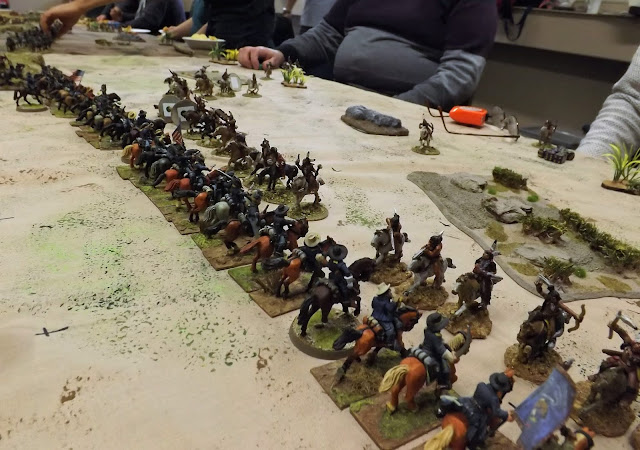 The Indian attack on the head of the column seemed to gather new emphasis as they saw Custer's distress and gained a temporary advantage in numbers as they sought to overwhelm A Troop before B could intercede.


However the first two troops of cavalry managed to hold the Indian attack driving them back, allowing Custer to remount and immediately wave his men to follow him in on a follow up attack of his own, this before C and D Troops had managed to deploy of the column of march ready to support.


Again Custer was the first to engage the enemy shooting dead the first brave he encountered only to suddenly find himself alone among three enemy braves as his men sought to close as rapidly as possible.

Suddenly the generals horse was seen to gallop out from the melee as the Indian braves gave a loud 'whoop' and as the dust settled Custer's lifeless body was seen sprawled on the valley floor.


The battle to win the centre took on a life of its own as both sides sought to get as many of their men into the fight and gain superiority.


Meanwhile the victorious troopers at the rear of the column suddenly found the tables turned as this time as they attempted to charge their enemy yet again they were met with withering fire from dismounted braves in rocks up ahead only then to be met by following up charges from other groups of mounted braves.


Press as they might the casualties among the soldiers began to mount and break up what had been a formidable cavalry line allowing the Indians to attack the troops separately and using their numbers to gradually overwhelm them.

If this together with the loss of Custer was not bad enough, then the tide of battle around the wagon circle started to move in favour of Sitting Bull's braves as losses caused from the continual break ins stated to cause a slackening in the defenders fire allowing more braves to chance an attack into the centre of the circle adding still further to the casualties. 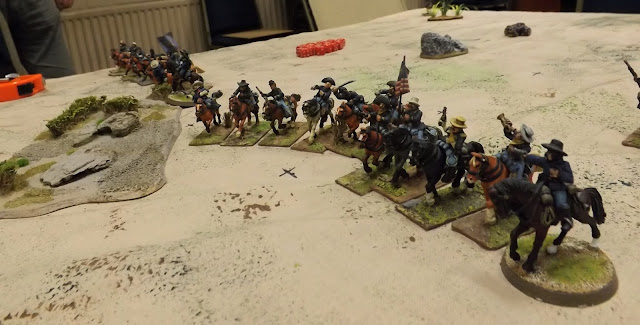 Eventually C & D Troops were able to charge in and break the Indian attacks on the head of the column allowing the soldiers to recover Custer's body and set off towards the wagon circle, rapidly closing on it and only just in time as the defenders were being forced to abandon an all round defence and look to fall back on the wagons closest to the approaching cavalry.


Both sides had won in different sectors of the valley and only around the wagons were honours fairly even with a lot of dead settlers but the cavalry able to offer succour to the survivors without much chance of the Indians being able to finish them off.

Thus with both forces well and truly battered but not bowed it was deemed our game ended in a draw all be it that Custer had lead his last charge but had at least gone down in the best traditions of the cavalry, from the front amid a group of the enemy.


A brilliant game to end the club year on with lots of drama, laughs and good banter and with a set of rules 'Warparty' rapidly adjusted for our big game requirements with Indian commanders moving about the table with newly acquired forces which only added to the fun as groups of players were changing throughout the day.


Thanks very much to Nathan, Chas and Vince who rose to the occasion and rapidly pulled together our scenario and game rules on the day, to all the members of the DWG who provided our festive fodder and the entertainment and to Bob who couldn't be with us as intended due to illness, get well soon Bob, but was very much involved in the pre-planning of our day.