Battle in the Congo - Chain of Command 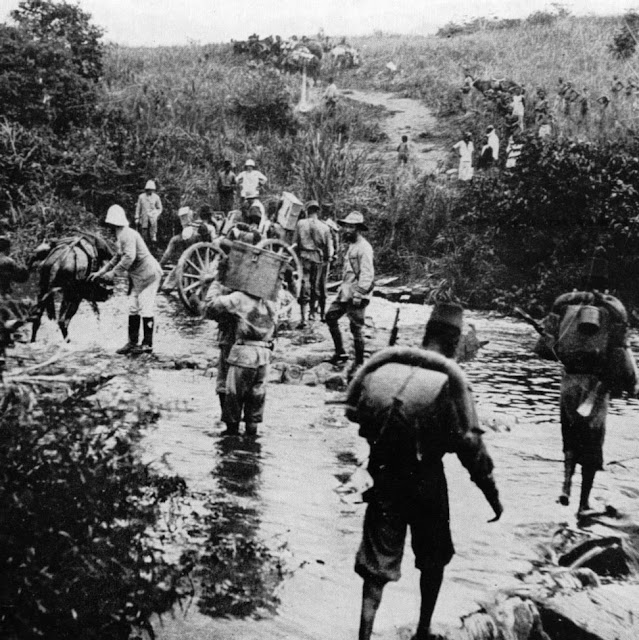 Just over a month ago, Bob brought to club his excellent WWI African collection of figures to host a WWI Chain of Command battle which caught mine and others eyes when we posted about the game here on the club blog.

Needless to say with my recent extracurricular activities centered around taking a 'deep-dive' into Chain of Command and the series of games we have been playing as part of the '29 Lets Go' WWII campaign I was really eager, and jumped at the chance, of seeing the rules used for a completely different campaign and era.


WWI land warfare is not a period or genre that generally excites my interest but the colour and lower level tactical options the war fought on the continent of Africa during that time has to offer, makes it a peculiarly different prospect and definitely more appealing for me.

That and getting to play with Bob's lovely collection of figures and terrain that captures the look as illustrated above only adds to that attraction. 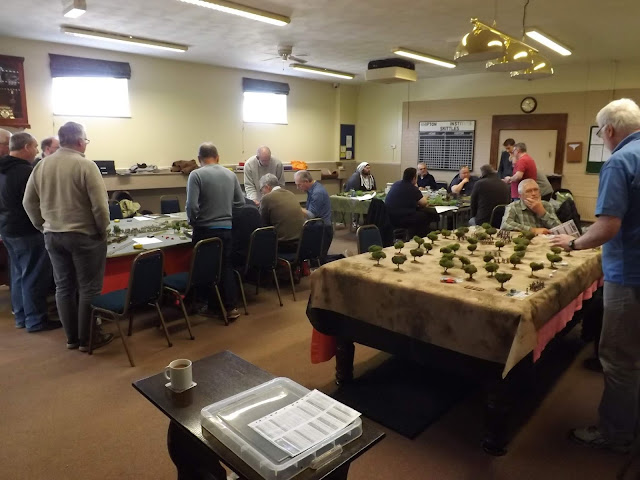 The club has been expanding quite dramatically in recent months and the picture above gives an image of the happy hubble-bubble of conversation around our three games yesterday and we are now looking to run four games at our monthly meet ups to cater for our extra membership and so it was that we had Ken joining us yesterday, as a new member to the club for our game.


The game set up saw us dispensing with the WWII use of the patrol phase and jump of points and simply had the two forces coming on from opposite sides of the table through typical broken African scrub-land terrain that limited firing ranges to eighteen inches.

The Belgian column was on the march escorting a supply troop of African bearers but wary of reports of a likely attempt by German forces to try and ambush them en route. The mission was to escort the supplies off the opposite table edge whilst the Germans were attempting to prevent that happening.


As the Belgian commanders, both John and I got some early luck on the dice with my force of Belgian Askaris, in their field drab, arriving on table with maximum force morale and with John's blue clad irregulars similarly high up the morale scores and with a series of three double sixes soon saw the Belgian column making early headway on pushing across the table.

Of course with the Belgian command making such rapid progress towards the opposite table edge it meant that at least one of the German pincer groups had less further to travel before being able to open fire on the lead Belgian units, but the Belgian sections were well grouped and able to deliver multiple rounds of support fire that saw the Germans unable to assert any superiority.

While the battle was well under way on one flank the other German pincer was struggling to find a way through the bush towards the sound of gunfire and poor old Bob was finding it hard to string a good series of die rolls together to get everyone moving at the rapid pace required.


This inevitably meant that the first German sections arriving on the Belgian right flank turned up strung out and were met by some well laid rapid Belgian rifle fire that left the lead German unit hugging the dirt with halve its number dead or wounded and with a lot of shock to add to the casualties.


In addition to making good headway both John and I had managed to build a cushion of Chain of Command dice that allowed John to interrupt the German move twice in succession to launch our supply column on a run to the opposite board edge and potential victory.


To make a game of it, or was it simply we didn't roll high enough to get the column off the table in two moves, I forget exactly which it was; the attempt to exit fell short and both Bob and Ken swung two sections, one from each side in the direction of the Belgian bearers managing to capture some of the supplies. 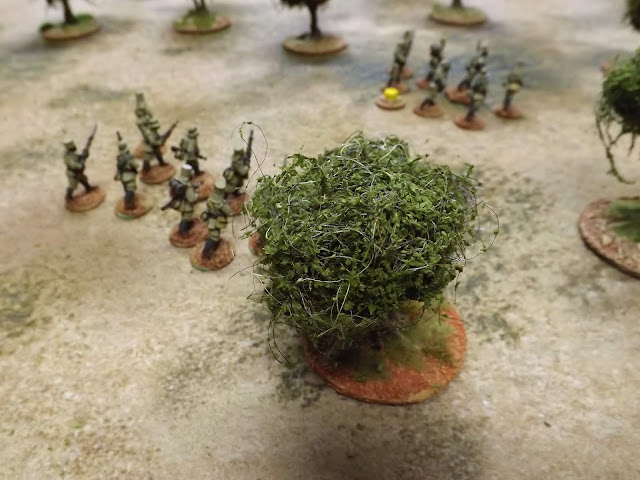 Immediately in the following turn both John and myself launched the nearest Belgian sections forward closing on the German troops and forcing them into a hand to hand combat on either side of the supply column.


The game had reached its perfect climax with a winner takes all situation generated as bayonets crossed and multiple dice were rolled.


When the dust had settled and the shooting died down, both German sections had routed off the table, taking the senior German commander with them and leaving a dead junior German leader among the dead and wounded and the Belgian bearers back among Belgian troops with a clear route off table. The following series of 'bad things happen' die rolls simply confirmed the tabletop situation and the Belgian column had forced its way through.

A really fun game with lots of drama and action right to the last dice throws and leaving me even more enthused about this very clever game system..

Thank you to Bob, John and Ken for a very fun and interesting game played with plenty of laughs, banter and chat.
Posted by carojon at 16:51