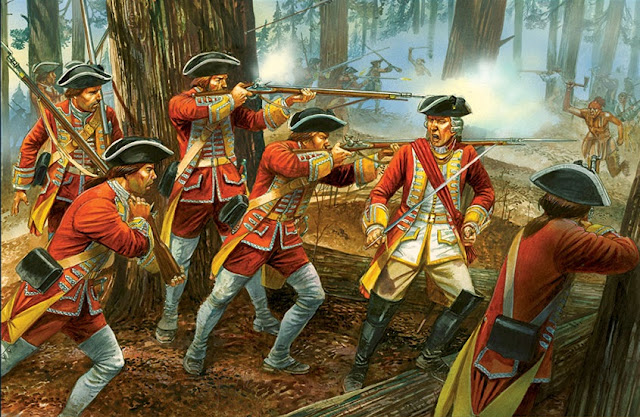 Having agreed to put on another game of R & P at the club, as the day approached, thoughts turned
to a scenario. And while I had a few ideas, what should land on my doormat, but edition 102 of
Wargames, Soldiers & Strategy and inside, was an R & P mini campaign based on the war of 1812.
There were three small scenarios, two of which involved variations on attacking a farm or plantation, which lent themselves to my collection of FIW figures. Therefore my scenario was loosely based on the ‘Burning of Waller farm’ 28 Aug 1814. 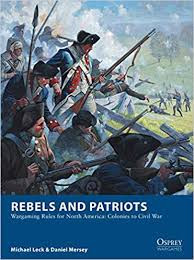 Our last couple of turn outs at the club have been quite large, so my thought turned to putting together forces that would lend itself to at least two a side, with the option to include a third if necessary, with yours truly as umpire. As it turned out (isn’t it always the case!) turn out was low and I ended up playing. Not a bad thing by any means, but it did mean that I wasn’t following things across the table as I should, so this report will be a bit one table sided! The other fallout for planning for larger numbers, was that I put together 2 x 30 companies per side, to be played on a 6 x 4 table. As you will
see from the pictures, this was a bit to much and led to a crowded table. But with plenty of ‘toys’ to
move and shoot with, it didn’t seem to bother the guys!


Each force was based on a regular and irregular company per side, and I do like to include all the little ‘tweaks’ – so there were green, timid, veteran and aggressive troops, good shots amongst the
skirmishers and bad shot and aggressive Indians. I also included 1 gun per side.

The objectives were for the British to burn the two barns (yes they look like houses, but they were
barns for this scenario!), the hay bales and destroy the crops. The French aim was to prevent this
Chas & Vince took the French/Canadian, while Colin and me had the British/Loyalist. We did roll for
officer ‘traits’, but I didn’t note them down! 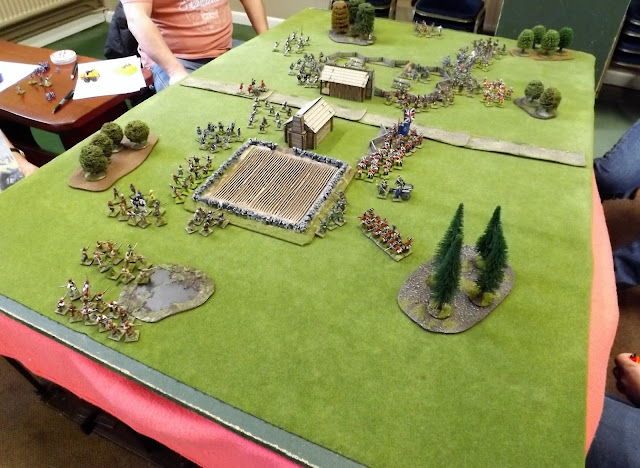 Colin took the British regulars, who I said could deploy straight on, while the Loyalist/Indians had to
dice for each unit to come on. On the French side, Chas had the Canadian/Indians opposite Colin,
leaving Vince with the regulars (also coming straight on) opposite me. Some of my Indian & militia
troops didn’t fancy the fight early on and had a couple of turns rest!

Vince and his French advanced, as my first troops approached the fence. We started to get into long
range musket territory, with the first casualties starting to occur. But with a minus for long range and
light cover, no devastating effect. 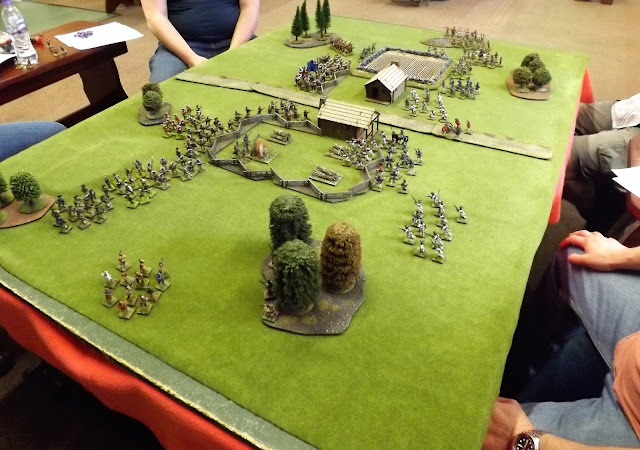 On the other side of the table, Colin appeared to be making slower progress, but Chas seemed to be
swarming forward! 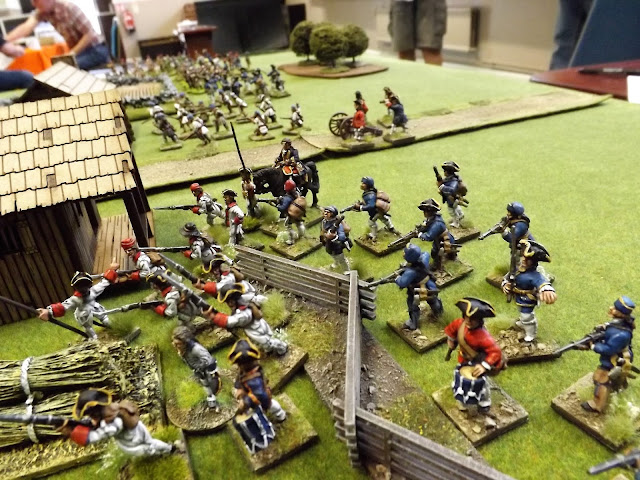 A unit of my skirmishers crossed the fence and got to the first hay bale, next turn, up that went in
smoke. Suddenly, across the table, Colin rolled double 1 (bad!) on his action test! This or a double 6
(good!), then leads to a roll on another table. In this case, it was another 1, ‘Friendly fire!’ ‘The unit
you have just tried to active opens fire at the closet friendly unit to its front and within range….roll to
hit as normal, but the target counts as in cover (whether it is or not)’. This could be painful! Luckily
for me it wasn’t, no casualties on twelve dice! 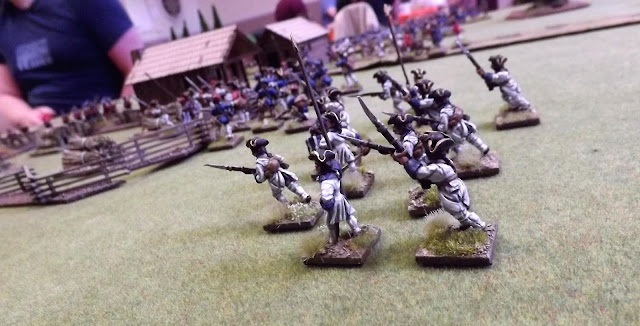 Colin now had one of his units at the first barn, that also went up in smoke! As did another hay bale
on my side. Colin managed to get his Highlanders (shock infantry) into action against some French
light infantry, and after an inconclusive first round, saw the French off.

Casualties were starting to mount on both sides now, with various units taking disruptions and
having to fall back. This was all down to musket fire, with the British artillery yet to get into action
and the French gun being largely ineffective. 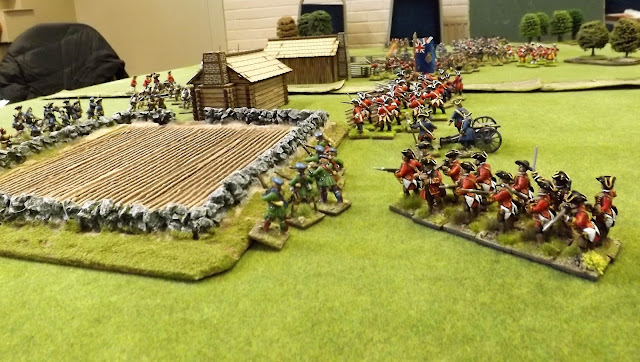 Chas rolled a double 6 for one of his activations, and then another 6; ‘Reinforcements!’ An extra 4
point unit. I did have to check, but that only happens once a game, per company, no matter how
many times you roll 6, after a double 6. Sorry Chas! 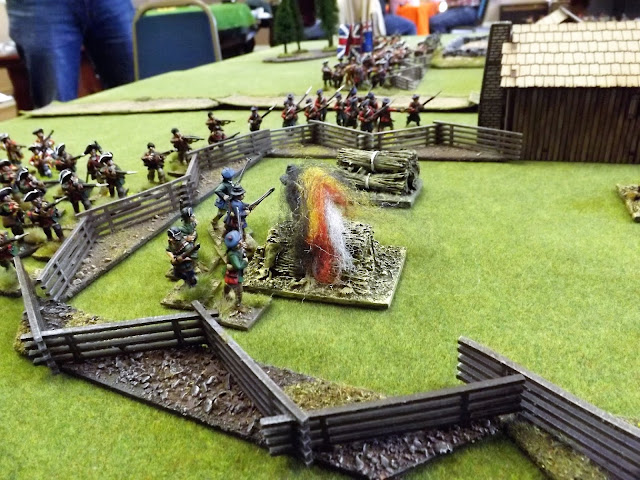 The second barn, and the crop field were now alight, and with multiple units now routed off the
field, it was declared a British/Loyalist victory. 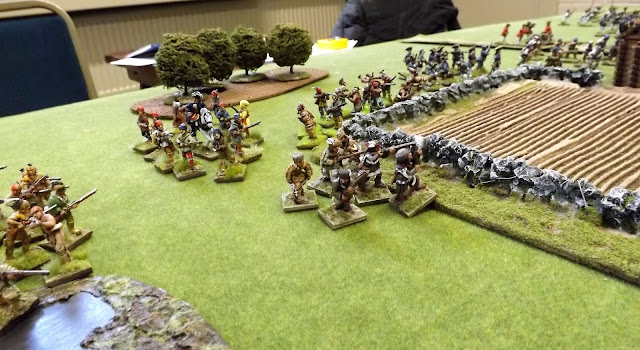 I am liking these rules and will aim to continue to play more games. The guys seemed to enjoy it,
although we agreed it is more of a ‘game’ as opposed to ‘simulation’, but who cares when you have
the ‘toys’ on the table, you’re having fun, and have the usual disagreements about line of sight!!
Thanks to Chas, Vince & Colin for an enjoyable game

As noted earlier, on a 6 x 4 table, 2 x 30-point companies per side are a bit much. I have played with
2 x 24 pointers and this seemed to work better. 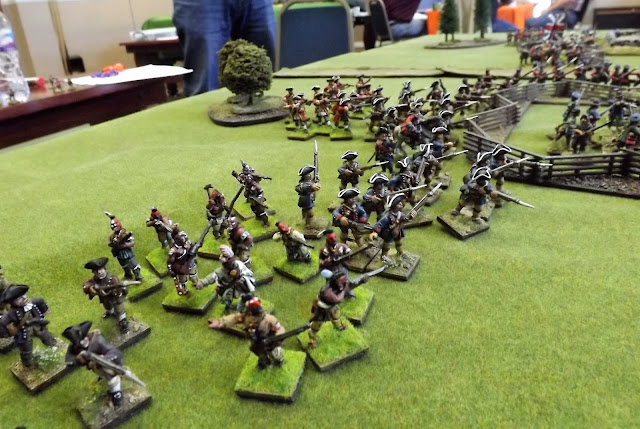 But for real inspiration, look at the game put on at Partizan using R & P! Its huge!!

My figures are a mixture of Galloping Major, 1st Corps, North Star & Foundry, buildings by 4Ground

This was a Steve M game
Posted by carojon at 13:56