Mr Steve M dug out his 28mm collection of French Indian War troops to entertain us with a rendition of the Black Powder scenario loosely recreating the events of the Fort Henry massacre of 1757 and vividly portrayed in the 1992 film, The Last of the Mohicans; as Colonel Edmund Munroe attempted to evacuate his sickly force from the fort under the terms of a negotiated withdrawal with French General Montcalm only to see the British column attacked by French allied Indians along their withdrawal route.
The table below is set up for the start of our game with several British infantry groups ready to attempt to reach the other table end and sanctuary or with the canoe representing a possible escape route over the river for one of our nine groups.
The French unit of regular troops represent another alternative for our beleaguered redcoats, as possible guarantors of safety should they be appealed to on route. 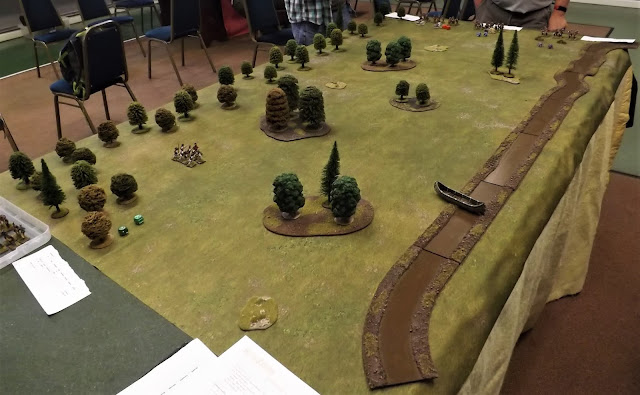 Below, can be seen our nine British groups loosely arranged in slow moving back to back platoon squares, with their activation dice arranged and each group of three having two baggage/distraction points available to be distributed about the table on our route of march, hopefully to distract groups of attacking Indians in one, two or three turns of baggage looting instead of redcoat scalping.
In the end, Lawrence, Paul and myself opted as British commanders to spread the distractions markers out equally across the table to give all our units as much cover as possible, however as play would demonstrate it may have been more advantageous to have given Lawrence the weight of that cover as his units were closer to the tree line on the side opposite the river which would be a constant source of Indian attacks throughout our game. 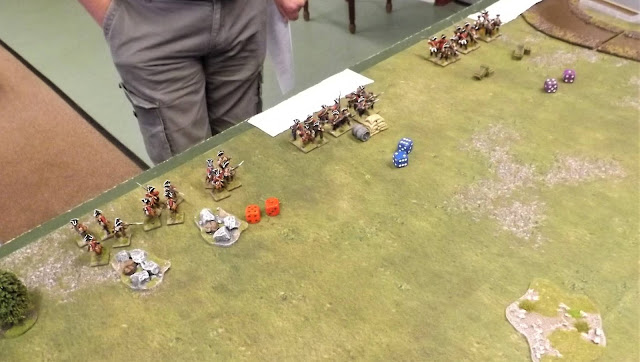 Simon took command of the Indians, adorned himself with war-paint, and assumed the role of Magua as the dice were rolled for each group of redcoats to make their perilous march to the opposite end of the table. 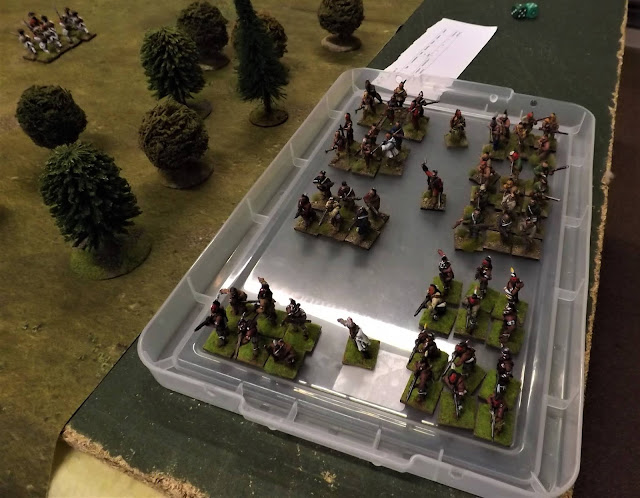 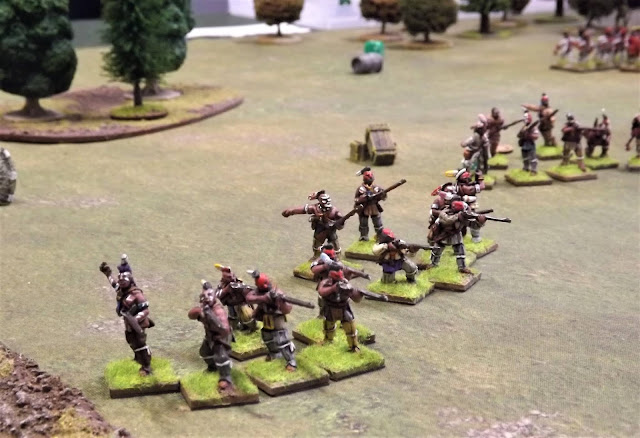 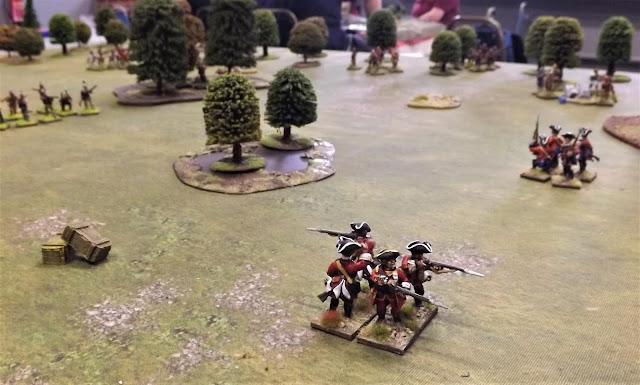 At first the game was seemingly looking rather straightforward as the activation on a score of eight or less with 2d6 seemed very gettable and the rapid movement rates in Black Powder of twelve inches had our huddles of soldiers advancing up the table. 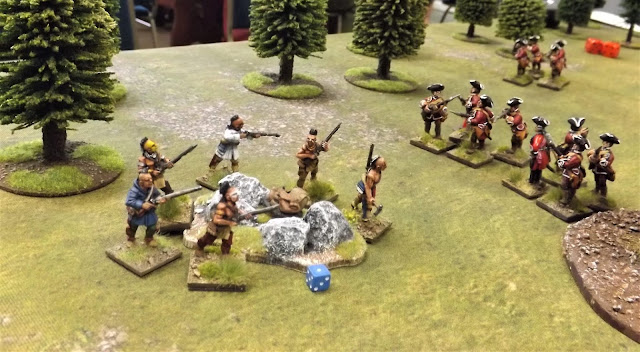 Not only that but the distraction markers were starting to take effect as Indians changed direction in favour of a bit of easy looting rather than tangling with the soldiers and with a few musket exchanges thrown in for good measure the first Indian groups were soon recoiling from where they had come. 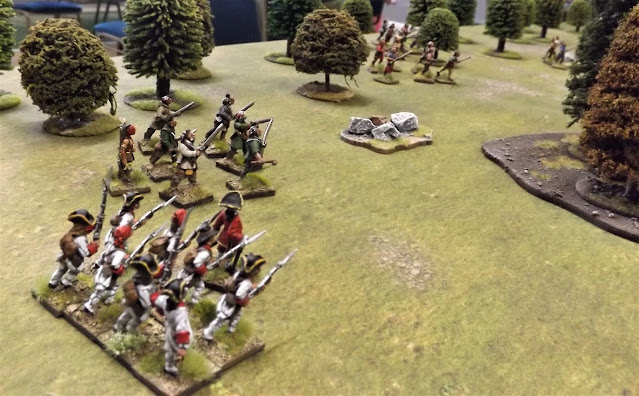 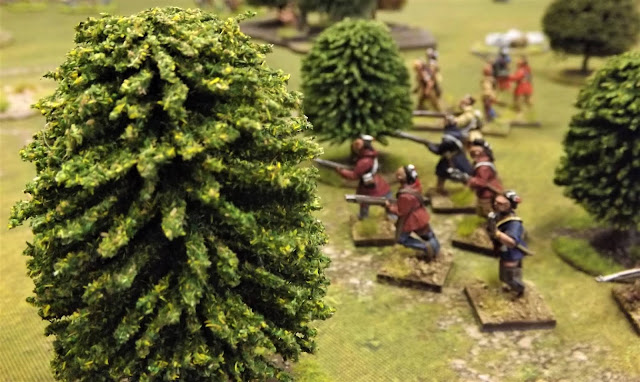 However the learning curve was relatively short lived as both sides started to appreciate the benefits of massing musketry on the same target, with the Indians taking advantage of the nearest cover to start to administer hits and disruptions on the British clusters, with three hits not saved causing the groups to become shaken and eligible for an Indian charge to contact. 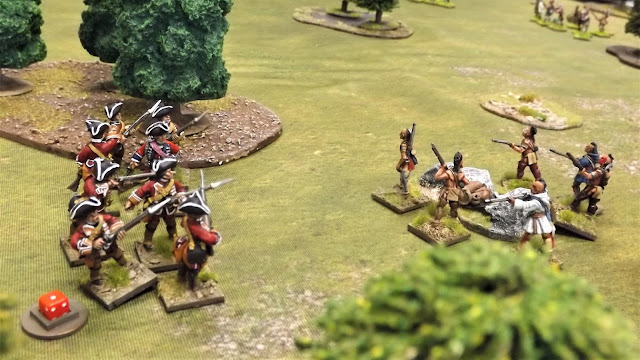 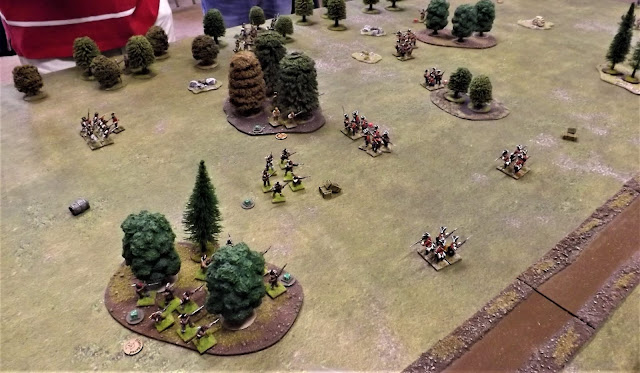 Thus the progress of the British started to slow as discretion meant that faster moving groups had to wait for stragglers to catch up to combine their fire, and the occasional halt needed to remove hits and disruptions, with ever more groups of Indians appearing from practically all corners of the table, making retreats and halts ever more perilous. 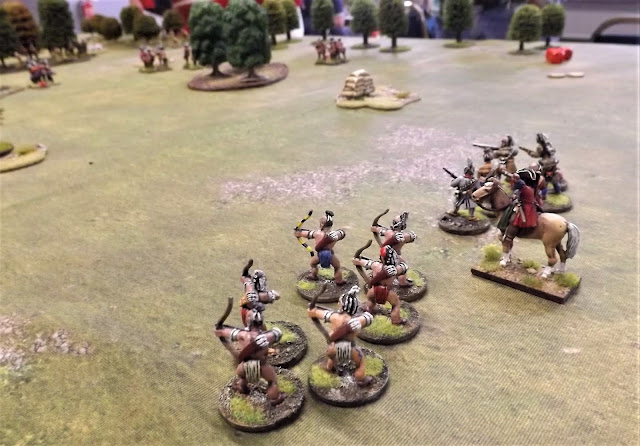 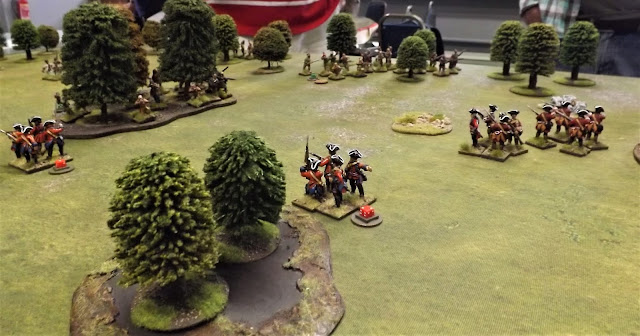 My particular column seemed to have the easier route, marching along the bank of the river which gave respite from attack from at least one direction, so much so that my two lead groups rapidly made it to the canoe allowing one of them to use it to make its escape, the only group as it turned out that did so.
This minor victory was two edged in that my firepower was reduced by a third and when the groups became separated as was inevitable they were easier targets to be attacked piecemeal, despite valiant efforts by Paul's centre column to lend a hand. 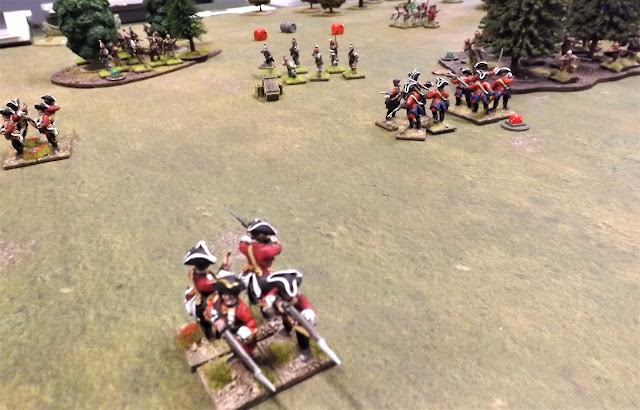 On the tree line flank the battle was very much different as Lawrence soon had his hands full with multiple groups of Indians pouring on the hurt from the cover of the trees and despite some excellent return fire from his redcoats, driving off a couple of groups in shaken disorder, Simon had the Magua touch and constantly managed to save two and three hits on multiple occasions that brought the British advance to a halt as movement individually and without support of the others became very risky. 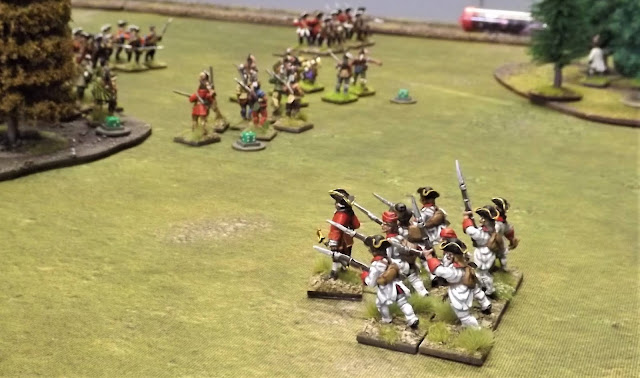 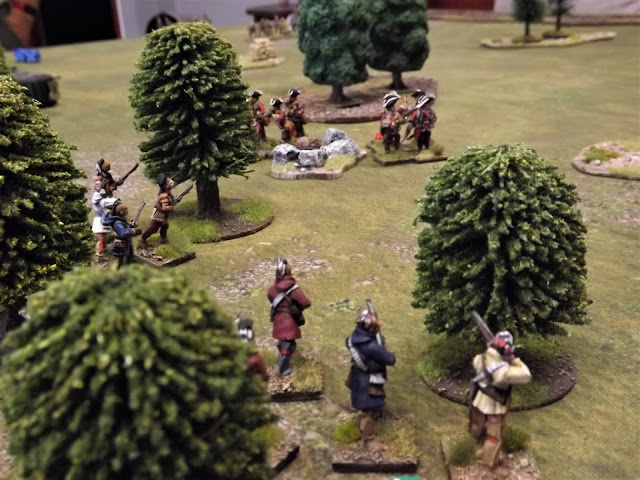 As the Indian resistance to the British advance grew, the battle on the river bank and the centre grew in intensity as the redcoats attempted to force a passage with Paul managing to cause a couple of groups to disperse after failing morale checks. 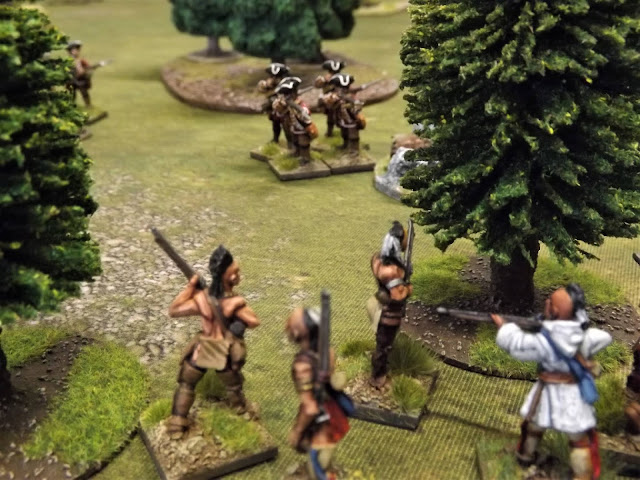 On the river bank, my lead group managed to get within three or four inches of the table edge but multiple hits and disruptions stopped the group for getting off the table and they were eventually charged by the Indians in their sector, beating off two such encounters in hand to hand fighting only to fail a subsequent casualty check and end up dispersing off the table - so close and yet so far away, as the song goes. 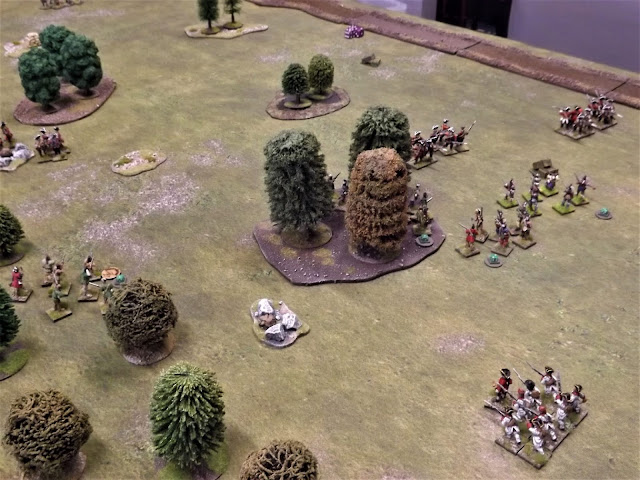 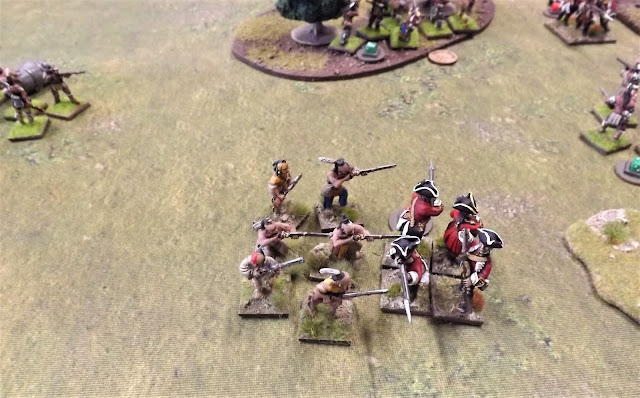 As the pub beckoned and with space opening ever wider between groups of redcoats, as groups dispersed and with others now teetering on two and three hits apiece amid seemingly never ending hoards of native warriors we called it a day having had a very pleasant day, at least for us, on the shore of Lake George. 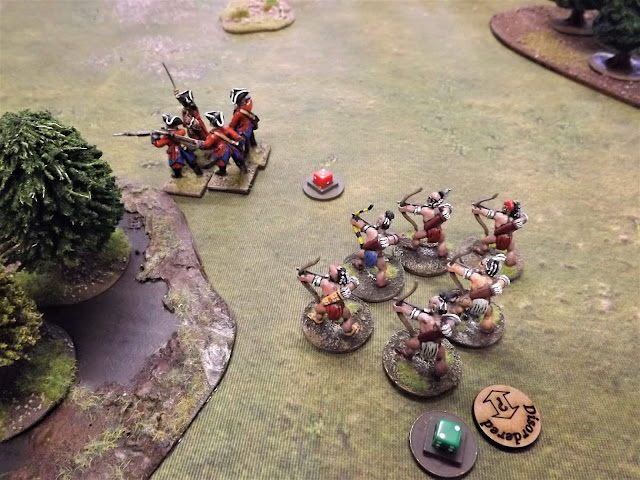 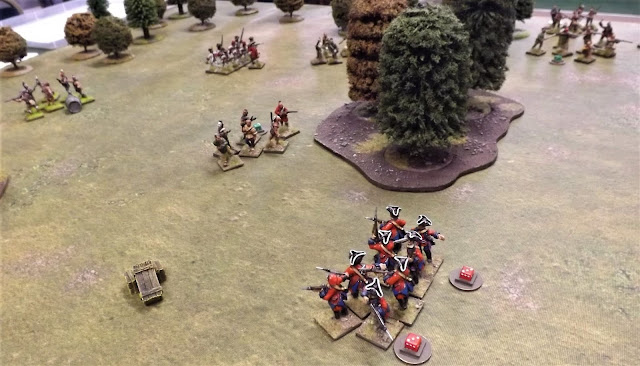 Black Powder does what it says on the tin, and is a good set of rules for the game they were designed for, namely to get a few chaps around a table rolling bones and having a laugh while doing so and, though not a rigorous modelling of black-powder warfare, do just that, and we all had a good afternoon playing with Steve's handsome collection of figures.
In addition, I am at the moment building a Mohawk Valley AWI collection of Perry figures for Sharp Practice and am keen to play the modification outlined by Simon Walker in his excellent Lardy Special article looking at George Washington's Indian War; which changes Indian forces into the force that, to my understanding, they should be, namely small groups of skirmishers able to move rapidly and disrupt formed enemies before closing to contact for the coup de grace using musket butt, and tomahawk.
This type of representation in in distinct contrast to the large warband portrayal, fighting in a style similar to a Zulu regiment, that does not seem to match historical accounts, and this Black Powder game seemed to model the skirmish group look to their fighting very well.
Thanks to Steve, Si, Paul and Lawrence for a very fun game.
JJ
Posted by carojon at 16:30