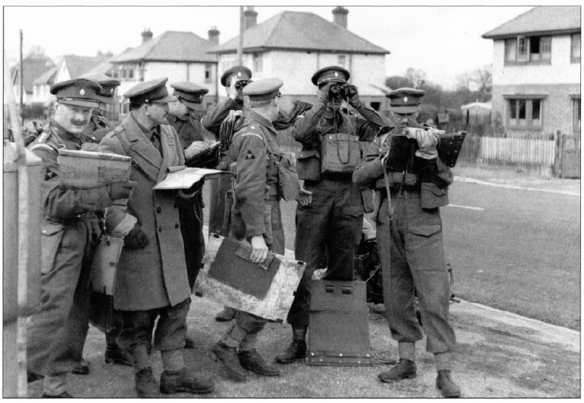 Whilst Ian and I have play tested this set of “Guidelines” ourselves many times, and, also, with a few other mates, this is the first outing at our club.
We have set this game up as a multiplayer Battlegroup game so that we can show, what we hope, is the
full gamut of what it has to offer. We also tried to introduce as many different weapons and situations as
we possibly could. We thus hope to entice as many followers to O Group as we can. 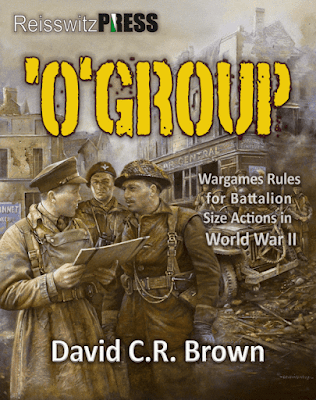 The scenario came from my head and is an attack and defend situation. The British are in the process of
establishing a bridgehead over a river which is just a little bit east of somewhere a little bit to the west.
The British 1st battalion is moving into the town to the north whilst 2nd Battalion is crossing the bridge to the south. Each battalion is split into three Companies each of three platoons which have three sections each, plus MMG’s and AT sections. There are Anti-Tank guns, 6pdr and 17pdr with tows. They have been allocated three rounds of off board artillery. However, one company from each battalion is in reserve along with limited armour and can only be brought on if the situation warrants.
The Germans have been ordered to counter-attack in line with Hitler's “die for me you cowardly swine”
order. They have been allocated two rounds of off board artillery. They also have two battalions made up in a similar fashion to the British. One company from each battalion is held in reserve. They do have a significant advantage in armour. There were no constraints on when they could employ their reserves.
There are some things to understand at this point. The Battlegroup commander is responsible for the
allocation of Regimental and Divisional Artillery at battalion request. Battalion Mortars can be used at any time but not if off board artillery has been gained as they use the same FOO. They throw for initiative using the sum of the Battalion HQ orders plus the score of 2 D6. The Battlegroup orders do not come into this. The town is split up in to four Built Up Areas (BUA). A BUA is not a single building but a group. There are six other single BUA’s on the table in the form of farms.
The British “Forward Defensive Line” (FDL) is 12” on to the table and the German “Start Line” (SL) is also 12” on to the table.
There were no objectives in this game as it was all about seeing the mechanics of play to new players of
the game. The winner was the one who inflicted the most FUBARS and had control of the table at pack
up time.

First the Battlegroup Commanders dice for their level, 1 = Poor = 4 Dice, 2- 5 = Competent = 5 Dice and 6 = brilliant = 6 Dice. The results converted to 5 dice per BG commander.
Dice scores of 6 only count. The Battlegroup orders can be distributed to the Battalion commanders, if
their HQ orders are fewer than six, to influence initiative. The British threw as Defenders their dice which included 6’s (two each) allowed them to note two ambush units each. However, 1st Battalion also threw three ones which meant that the Germans had the opportunity to interdict any deployments for the first three turns. All the 2-5’s meant that they could put combat patrol (CP) markers behind the FDL.
The Germans threw as Attackers scoring one 1 each. This counts as a pre-bombardment, and
consequently the British lost one platoon each. The sixes were converted to units on table behind the SL
and the remaining were converted to CP’s, also placed behind the SL.
The Battalion commanders now threw their deployment dice. The attackers, the Germans, had ten dice,
whilst the British, as defenders, had nine. The deployment dice determine the initial setup. How any units can be deployed on table, how many ambushes can be had and much, much more.
When all deployment actions were taken the Battlegroup commanders diced again and started their
accumulation of dispersible orders, remember, only 6’s counted, to a maximum of six.

The battalion commanders then diced again, battalion orders were noted, once again a maximum of six
only allowed, and company order chits piled high. At this point the game looks easy as you tend to have
an excess. Any company orders not used in a turn are lost. Later in the game, lots of things to do but no
orders to do them with. You can use you battalion orders to supplement the company orders, but this
may influence the initiative throw. So many chances to screw things up.
The initiative was gained on turn one by the Germans and CP’s were fired out in all directions, but as no deployments can be made on moved CP’s in the same turn, the only units on the table were those from the initial deployment. So many orders left over. 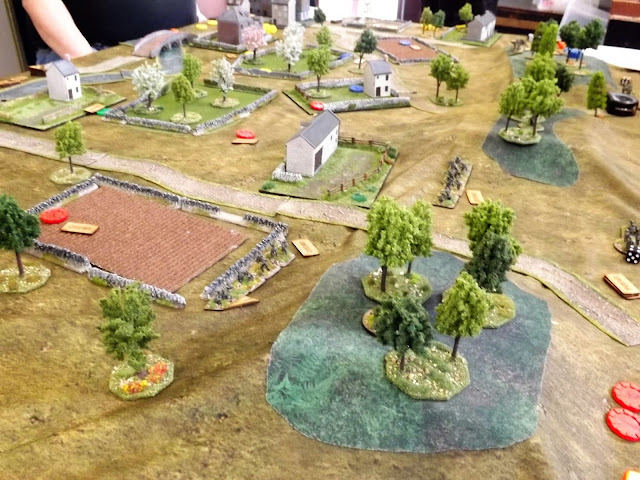 The British left flank commander responded in his turn by targeting one of the German units on the edge of a wood with his Battalion mortars, managing to inflict one shock. A good start. The British commanders sent their CP’s out as well, but they were hampered by not being able to have them within 8” of an enemy CP.
The first four turn’s initiative was won by the Germans and consequently they were in the driving seat in getting units deployed and into action. Mortar fire was exchanged causing minimal damage.
Now the action was joined in earnest as deployed units exchanged fire causing shock and suppression.
Where the chuff are all the orders I want?
On the German right flank, a succession of Hesitant Company dice throws (three ones on battalion order throws) caused them to falter in their advance. Typically, as all bad workmen, the commander blamed his tools, in this case the dodgy blue dice he had been provided with. He bitchedrightly complained about them until the end of the game. Oh, for a quiet life as an umpire. 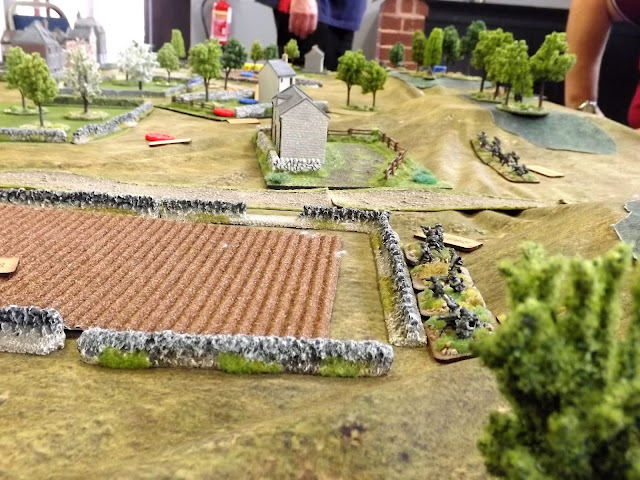 His bad fortune was not mirrored on their left as they reached their consolidation point and over the next couple of turns managed to deploy the 3rd company.
Under intense pressure, and with suppressed units all over the place a British divisional artillery request
was made to try and ease the situation. He gets a Medium Battery. Next throw for accuracy. What’s that
he’s thrown? A double one. Oh, poop he say’s (well close) as this is a Danger Close and the total of three D6 towards the nearest friendly unit means he hits his own platoon, causing one stand to be removed.
I should note here so that I don’t get comments saying I am wrong. As a House Rule Ian and I decided
that British 6 and 17 Pdr AT guns would get two rounds of APDS giving a +2 on firing, this would include any vehicles mounted with one of these guns, i.e. the Firefly. All towed AT guns were also restricted to two rounds of HE. Tanks were not affected by these HE restrictions.
Armoured vehicles were now deployed by both sides to help their attacks with direct HE Fire Support. 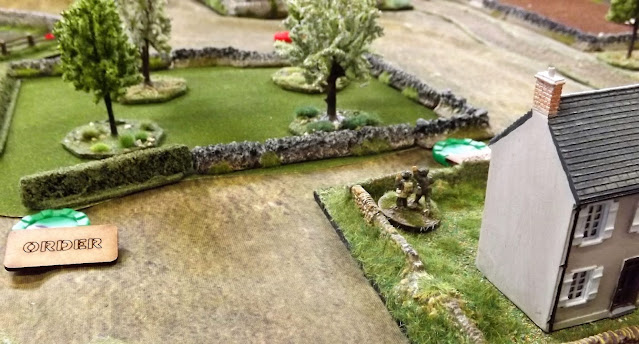 A Panzer IV H appeared on the British right flank and was targeted by a British Towed 17pdr firing APDS. The result was inevitable, and the German tank brewed on the spot. Boyed by his success and seeing suppressed units in front of him the British commander brought on his Churchill and opened fire with HE. The next turn, much to the consternation of the German commander, he discovered that this was not an ordinary tank but a Flamethrower (Crocodile). Casualties were inflicted, but eventually the Churchill was overpowered by Jagdpanzer IV’s and was destroyed. The British right flank was beginning to crumble under the pressure of the German advance.
On the German right despite his initial hesitancy, the advance continued. Stug III’s appeared to give fire
support and the weight of numbers started to take effect. The British brought on a Cromwell with a 95mm Howitzer to try and help his beleaguered troops, but this tank was quickly despatched by the Stug’s AT fire. Those German 75mm long guns are lethal.
Weight of numbers of the Germans now told on both flanks. The Pub was calling. So Ian and I called a
German victory and we packed up and went to the pub. Well Bob and I did. 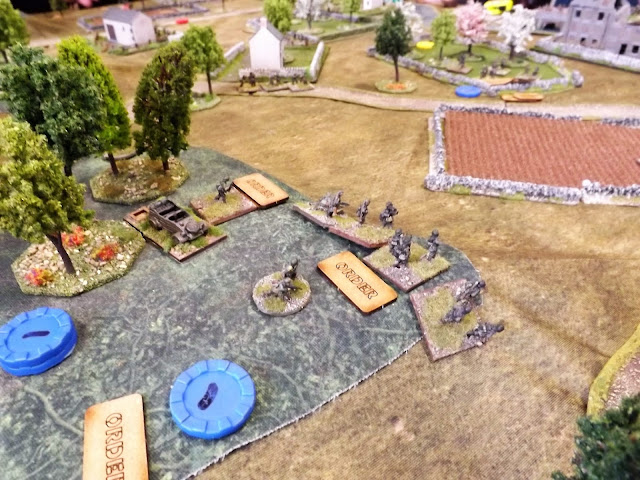 There were three people playing this set of rules who had never played them before and one who had played twice. The overall impression was very positive, and I think that they will be playing them again.
I would like to thank Ian who co-umpired, very essential with so many newbies, Bob and moaningthe very polite Jason, our Germans and Nathan and Chris, our British.
The terrain cloth was by Tiny Wargames. The figures and vehicles came from all over the place, and I can’t remember where now. Building by Hovels and a company which is no longer in being. Trees mainly from Buffers of Axminster and the walls and hedges from ebay. The BUA’s I made from bits and bobs I had lying around. I made them generic so they can be used for other eras.
Posted by carojon at 16:51