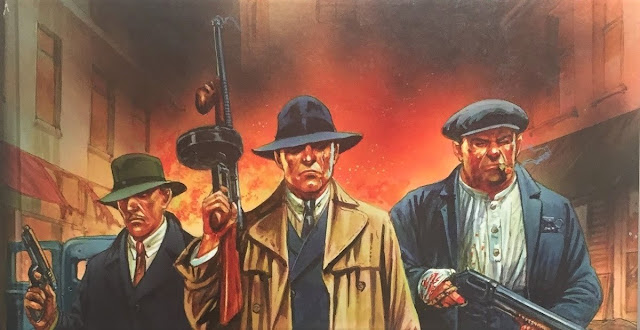 Paradise, Illinois, a small city near Chicago during Prohibition was run by two gangs. In this game the two gangs have organised a meeting with their accountant. However the Police Department and Feds also wish to join the meet. 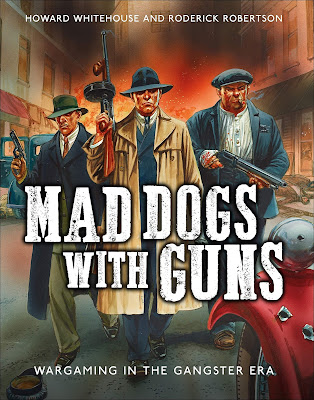 The rules used are “Mad Dogs with Guns” a card driven game. Each player was given a faction worth $1,200 plus transport. In addition each player had three objectives, mostly to do with the accountant and his bag. 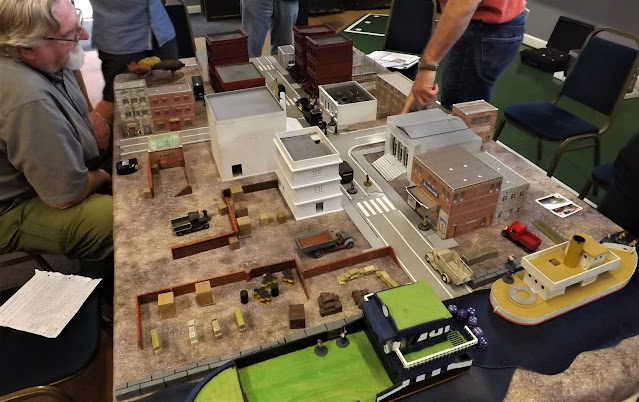 The game started when “The Dude” and his gang picked up the Accountant from his digs. There was some concern that a truck parked opposite might be suspicious so the gang kept a watch on it. The Accountant got into the car with “The Dude” and his “Nice Girl”, she commented that he looked very much like Fred Jones from Scooby-Doo. 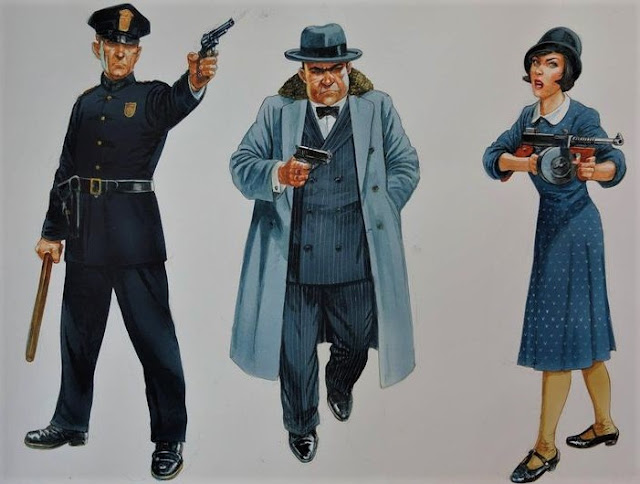 They travelled uneventfully to the Diner where the meeting was to be held, they pulled up, the gang spread out, and the Diner was given the all clear. At this time all weapons were hidden as it is against the local law to carry guns. The truck had followed the gang but this was not considered suspicious as each player could move the Civilians and Trucks. During this phase the movement of Gangs was disrupted by citizens getting in the way, the most disruptive being the “Sisters”. 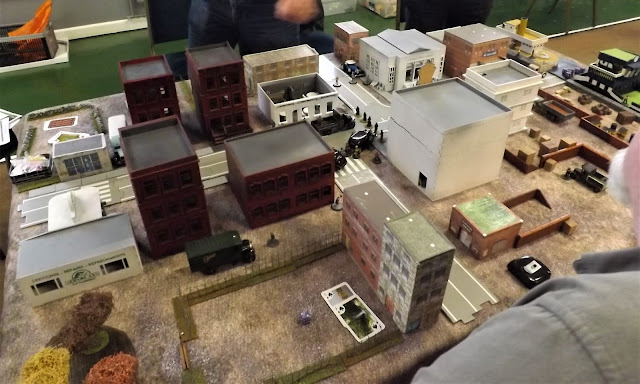 Now things warmed up. The Dude's gang were suspicious of some characters across the square. Shouting out to them to keep away they responded that they were Feds. To this the Piano Man uncovered his Tommy Gun. Unfortunately for him in the suspicious truck were Cops who opened fire. There ensued a gunfight which went on until one of the Feds shot the Piano Man in the back. 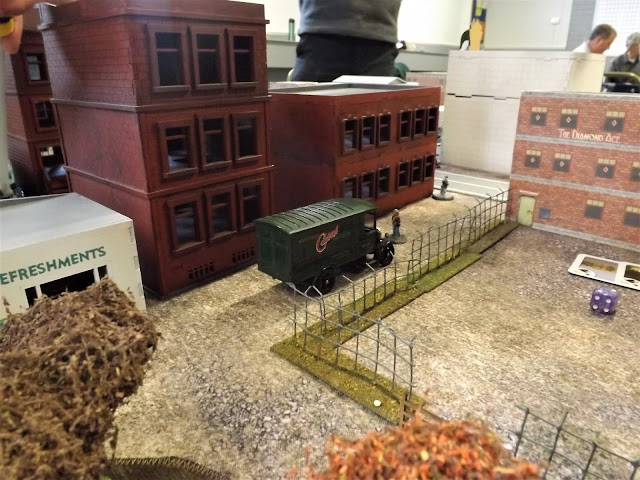 A general firefight now started the Dude's gang taking on the Cops and Feds. The Dude with top gang members exited the back of the Diner. The first escape route was blocked by the Feds, so they ran the other way towards Ken's Gang (who had their heads down and guns hidden so far). This however was blocked by the Cops who started to arrest the gang members and shot the Dude and Accountant. 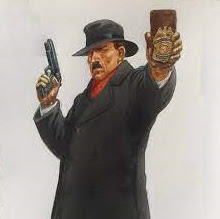 This all happened down a back lane, no one saw what happened but the Cops report was that the Accountant took a gun from a Beat Cop and shot himself. The Chief of Police Si, was pleased he had now achieved one of his objectives. 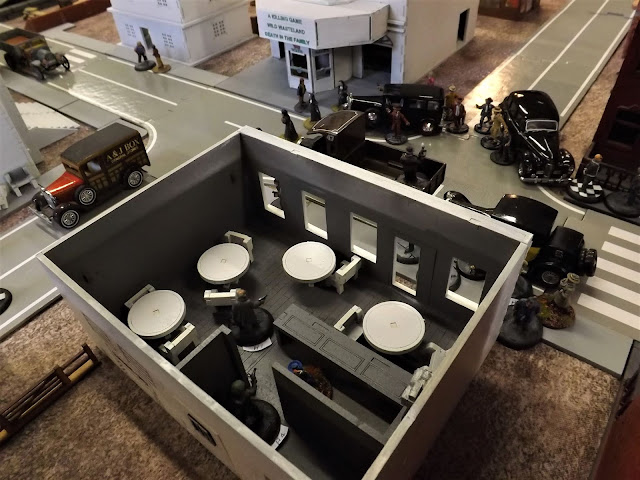 The game now changed into what resembled a American Football Match. Ken's Gang open fire and his wheelman runs down some Feds, his car crashes and goes up in flame (yes these rules are that detailed). A Cop picks up the Accountants Bag and starts to run, closely followed by a Fed. He is tackled, the Fed now runs back, he passes a hiding Hood who shoots him, drops the bag. A Cop now picks up the bag but a nearby Fed with BAR drops him (unfortunately also takes out a citizen). One of Ken's gang is now running with bag, but then a Fed gets it off him and makes it to the Car. Before he can start the engine, Ken's Hood is grabbing the Fed through the window. As these two fight it out a Cop with carbine stands by watching. Ken's Hood wins the bag, he turns around and gets shot........ End of game. 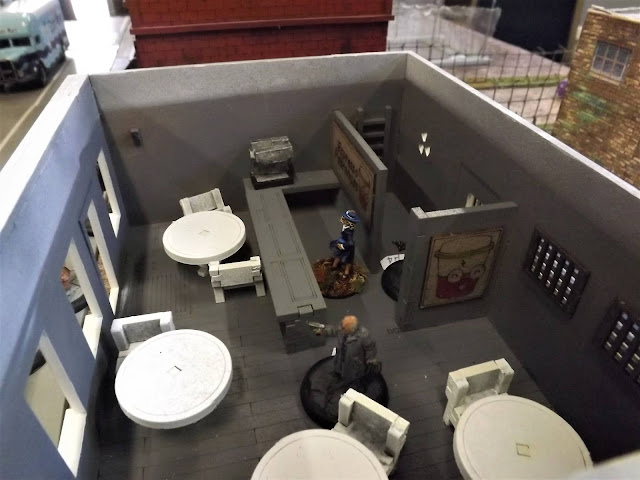 As all that was going on Cops had rounded up the rest of the Gang Members and Arrested Feds for shooting innocent civilians. 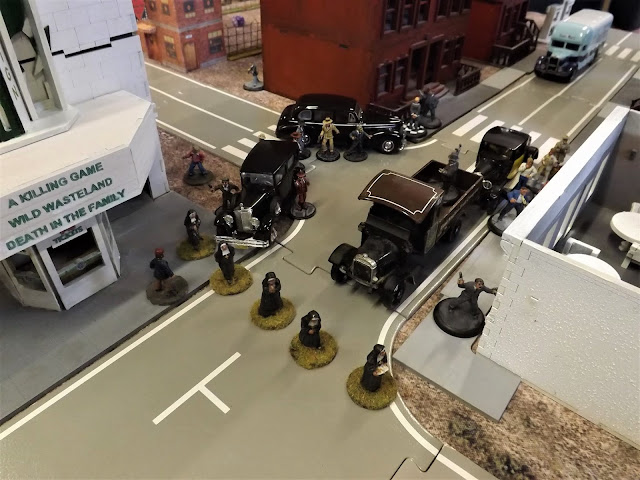 There were other side story's that played out during the game, one of Ken's hoods was beaten up by a Nun. Nice Girl tried to escape using her purse gun to name but two. 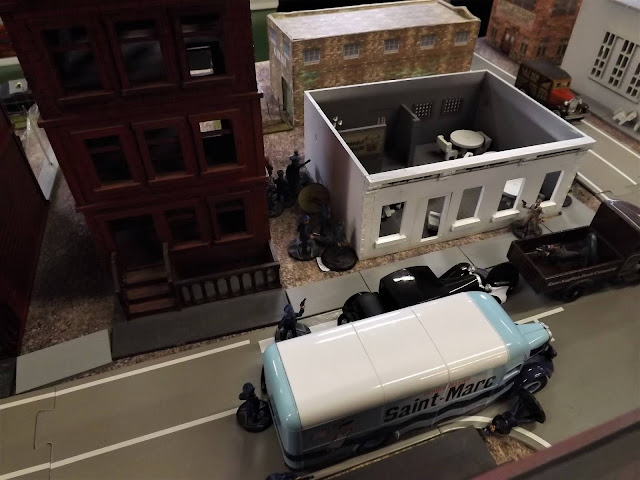 This was a fast moving and well set up balanced game thanks to Vince who was also umpire today. Steve M was in charge of the Feds and Si the Police. Ken controlled the Italian Gang and I was the Dude (hence there being more detail in my report about my actions). 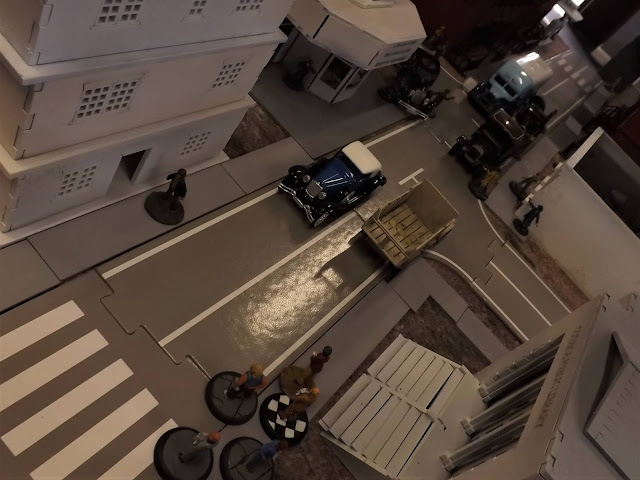 Technical Bit
The rules as mentioned above were “Mad Dogs with Guns” and they play well and have lots of period detail. In addition they have a well thought out campaign system, which a group of us used during the first lock down to get our wargaming fix. 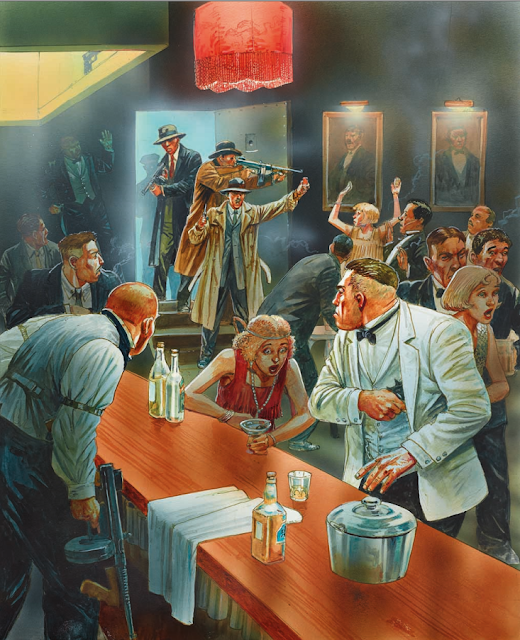 Figures are mostly Blue Moon and Copplestone with a few Pulp Fiction thrown in. Buildings were from TT Combat and Armchair General.
Posted by carojon at 08:56