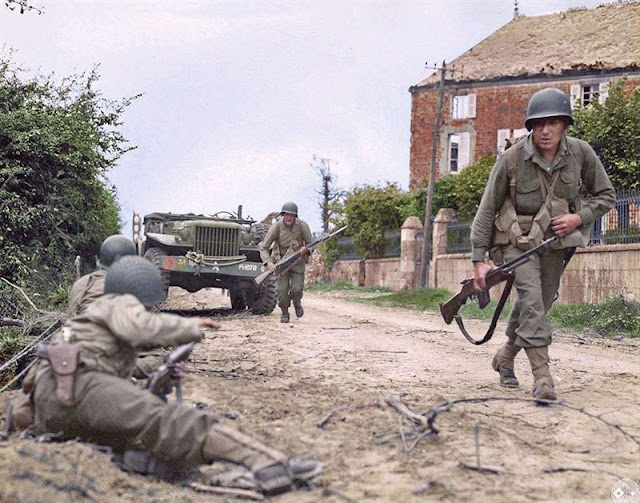 One of the things I love about this hobby is the diversity of interests it caters to – not just at the high level ‘Fantasy, historical or Sci-fi’ divisions, but also the breadth of creative outlets it provides for. Some just love to play, some just love to paint, though most of us are a unique mix of these juxtapositions. Like a lot of us, I like to spend time making scenery as much as I like to paint models.
Up until now I’ve been using some of the many MDF building kits available (Charlie Foxtrot for the most part) but I was recently inspired by YouTube hobby videos (MS Paints and Black Magic Craft in particular) to have a go at scratch building something. That process would be another blog entry in its own right, but culminated in a rustic barn with a removable roof which revealed a workshop and hay loft inside. 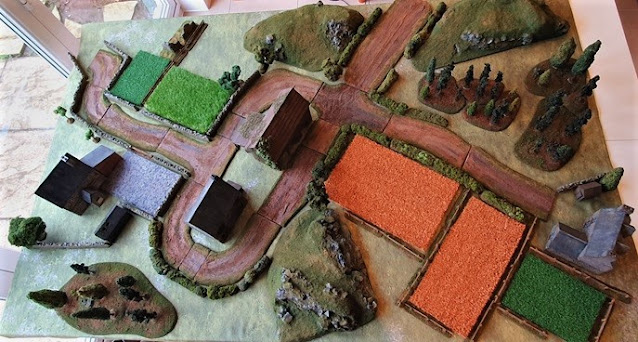 Wanting to give this new piece of scenery a first outing I decided to use it as a centre piece in the Bolt Action game I was laying on at the club. And so the table layout I devised (see above) put the barn at the centre with a farm track arriving from off board and encircling the barn before leading to two other buildings. Being based roughly on Normandy countryside in 28mm, the name Isle de Grange (Barn Island) seemed fitting for this set-up.
I chose ‘Sectors’ from the main Bolt Action rule book as a guide for writing the scenario, adjusting the Victory Points that were available to include points for majority, as well as total, control of sectors. The back story was that the table showed a location somewhere on the edge of the Falaise gap, with German forces needing to control the area to allow troops a successful withdrawal towards the Fatherland, whilst U.S. forces correspondingly needed to deny control of the area to maximise the forces ‘bagged’ as POW’s in their drive towards Germany. 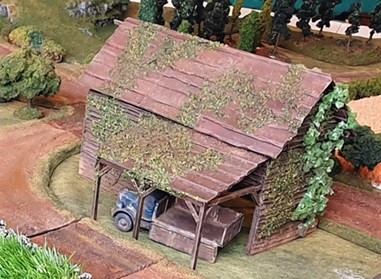 Si was able to field 1000pts of his own Germans as a reinforced platoon, so I was free to write lists for the remaining three leaders – Chas (German Player 2), Nathan (Patton) and Stephen (Capt. Spears). As an introduction to the way the game plays, I wanted a nice mix of unit types to give a breadth of experience. Each list had some armour, some support weapons and the de rigueur core infantry units, with a mixture of regulars and Vets. U.S. AFV’s were Veteran for example to get the benefit of the gyro-stabilisation rule. It wasn’t until the game had started that I’d missed a trick in terms of stereotypes though, not having provided a single Bazooka for the Yanks to point at tanks!

Avoiding the preparatory bombardment action normally associated with this scenario (I didn’t want to put them off too quickly!) Nathan chose to deploy all of his forces in the first turn, the other three keeping units and, notably armour, in reserve to wait and see how the game would develop. We did use the hidden rule though, with players marking a map to show the location of pre-deployed units in the neutral sectors rather than giving the game away by placing spotters, forward observers and sniper figures on the table. This resulted in some close quarter shooting later in the game as both armies had deployed snipers within a few inches of each other on the same hill!
Kindly, Patton lined up all three of his MMG teams on top of the Eastern hill thinking to control the road junction below and prevent the Germans from progressing much farther up the table. I suspect in a game of Chain of Command this would be an effective tactic, with MMG’s being much more true to life in the devastation and suppression they can cause. It has been observed on forums though that MMG’s are a bit underwhelming in Bolt Action. By contrast, the high explosive rounds from a German heavy mortar which took them out were perhaps disproportionately devastating in the other direction.
Poor Nathan also had his Sherman shot out by Chas’ Puma very early on in the game, which sort of set the tone for Patton’s army for the rest of the game really. I understand this was the gods of fate serving up cold justice for some previous whitewashing on Nathan’s part, so it just goes to show that you can’t get away with much in the long run.

Meanwhile, Spears’ units did a grand job of suppressing the enemy’s advance up the Western flank, pounding them with with mortar and howitzer fire called out from well placed observers in the house in the middle of the ‘island’. Si made very good use of the hard cover afforded by the rocks on the hill tops, but this meant his units went down several turns in a row, allowing Stephen’s paratroopers to break out of the farm yard and use the ‘shoot and scoot’ tactic for which the Americans are famous to whittle them down as they approached the suppressed German left flank. 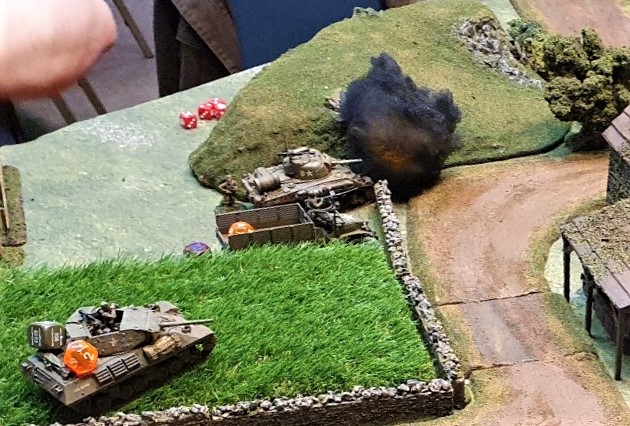 Hand to hand combat is a devastating affair in Bolt Action with total victory or defeat often coming in just one round of combat. By the time the 101st had assaulted the cowering Hun on the hill they outnumbered them about 3:1, so the trouncing that German squad received was almost a foregone conclusion. 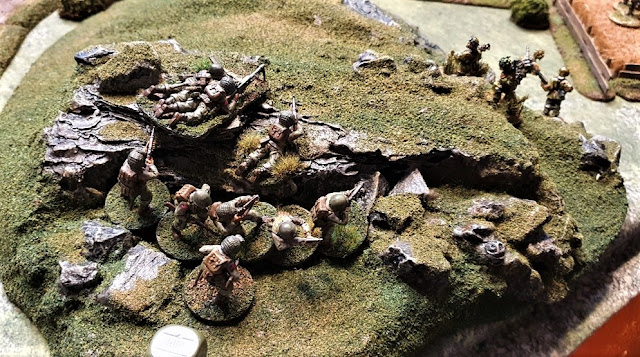 The ebb and flow of battle soon reared its head though, with Si’s Stug 42 having made an entry onto the table from reserve. Well within range in a couple of turns, it pointed its stubby little nose at the brave paratroopers and exterminated them in a single shot. I wouldn’t want to have had to have cleaned that one up…
Over towards the centre of the table in usual Patton style a similarly aggressive strategy was being employed, with Nathan running one of his regular platoons up into the barn to cover the open fields beyond. This proved too juicy a target for the Germans, with both Chas’ units exiting the safety of the forest area and Si’s command having already reached the hill and fields in front of the barn. 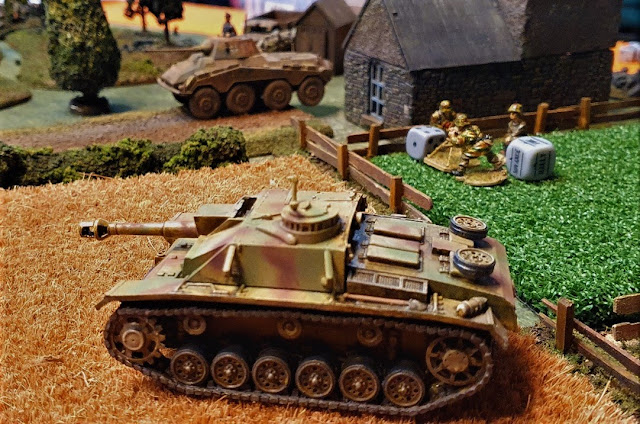 Having both weathered U.S. air strikes (with fortuitous ‘Ground Attack’ rolls) from Stephen ‘Spears’’ army, the Germans focussed their attention on my lovely new barn and the unfortunate squad of regular infantry therein. It took a couple of turns of shooting, with the pins creeping up and up for that squad until they were eventually ‘pinned out’ (when the number of pins exceeds the morale value) causing an
automatic rout for that unit. 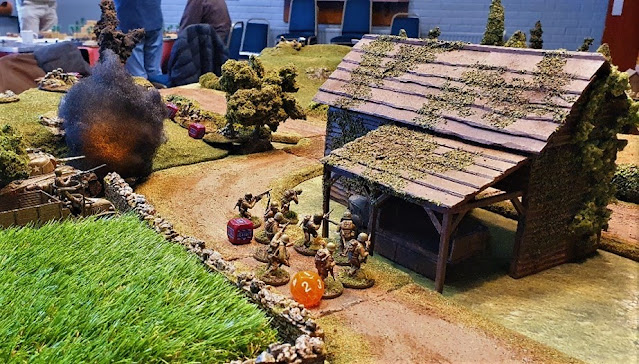 With the left flank decimated by mortar, the armour defeated early on by some good German dice rolling and the squad in the barn pinned to the point of routing, the only viable option left to the Yanks was for the White scout car to suppress the truck and infantry in front of the barn so that a team of infantry could assault them. Alas, this was thwarted by the well placed Stug which would have had either as targets when it sprung the ambush order it was given. 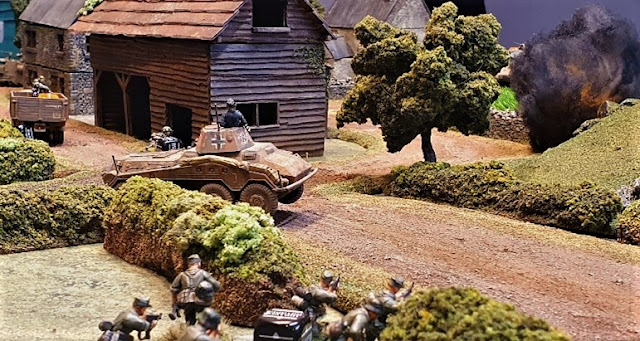 In gentlemanly fashion the writing on the wall was duly noted, and the game’s final victim was the White scout car, only having to suffer the wearing of the ‘smoke of shame’ for as long as it took to then start packing away.

An aggressive start from the U.S. was met with a more cautious beginning from Chas and Si, but failed to hold the centre ground in the face of superior German game play this time. Well done to all who took part. Given that for most it was their first game of Bolt Action the U.S. play might well have worked, but proved to just be a barn too far.
Posted by carojon at 08:10