Last month, Maurice featured at the Devon Wargames Group, as Martin entertained us with a Seven Years War Prussians vs Austro-Bavarian clash, using his Pendraken 10mm collection that got its first run out on JJ's Wargames, see link below, as Steve M and myself reacquainted ourselves with a favourite set of rules.
Our club game was a much larger affair that saw the Austro-Baviarian force lined up on a long ridge overlooking an important river crossing before a small village with two bridges, one leading through it and the other further upstream.
The Austrian general in command was busying himself overseeing the extraction of a rather important convoy of foods and munitions that were hastily assembling in the village, together with some important nobles and their ladies, keen to avoid an early introduction to the Prussian General Staff; and to cover their withdrawal a brigade of Austrian cavalry supported by Croatian Grenz covered the approaches.
Steve M and Gregory were tasked with administering the Austrian rear-guard, as Vince and I prepared to lead the charge on the behalf of the King of Prussia as our advance guard came up the road ready to challenge the Austrian possession of said village with jaegers and cavalry to the fore, closely followed by the main army ready to exploit an early success by crossing the river to challenge the main Austro-Bavarian army lined up on the ridge beyond.
The early card play in Maurice is very often a case of one army getting into a position where it is ready to contest with its opposition.
The Prussians in this case, were forced to spend their cards trying to orchestrate the movement of their forces whilst the opposition did its best to frustrate and disrupt those movements, looking to create an opportunity for a counterattack or to weaken a later enemy advance.
With the village an obvious route of advance on perhaps the weaker part of the Austro-Bavarian army, we decided to clear the village with one part of the Prussian army while the other part got across the river upstream and shook out into battle order ready for an advance. 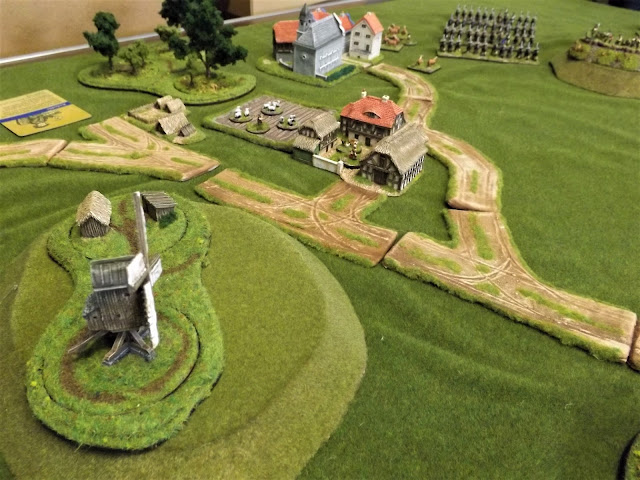 The battle for the village and its bridge became a fierce skirmish between the Grenz and Jaegers with the later able to shoot their way into the village and clear it with the sword bayonet and both the opposing cavalry stared at each other as the battle progressed.
With the village cleared, the second division of Prussian infantry crossed over the river and deployed close to its outskirts, whilst the other infantry force and main Prussian cavalry were sorting out their messed up crossing behind the woods close by,  caused by rather accurate Austrian gun fire during their passage.
As Gregory pulled the Bavarian cavalry back from the village, Vince spotted an opportunity to exploit the move by ordering up the Prussian infantry to advance in pursuit in line, a formation that, provided the flanks are secure, is a very dangerous threat to any opposition, given the deadly firepower of Prussian infantry of this era. 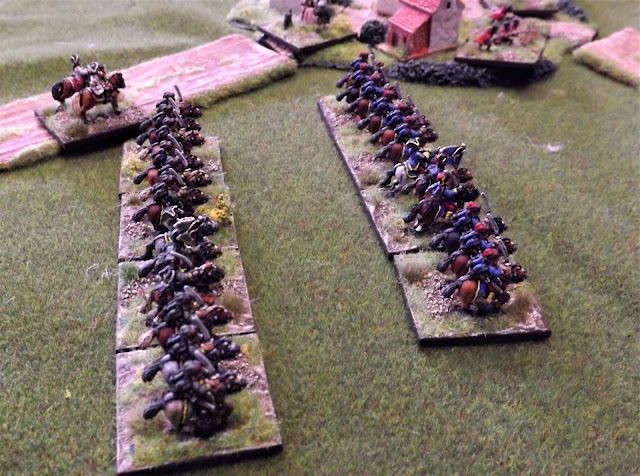 The move by the Prussian infantry proved to be the principle attack of the Prussian army leaving the other flank quiescent as the attack demanded the limited pool of activation cards to support it and seeing the Bavarian cavalry with its back pinned against its infantry that had come down from the hill behind in its support, as the Prussian muskets went to work.
The front Bavarian cavalry regiment was decimated before the Prussian fire, and as the Bavarian infantry came forward to cover the retreat of the remaining horse, they to found themselves battered by a similar musketry fusillade followed by a charge.
In desperate need to turn the tide in their favour the Bavarians traded activation cards to bring up their single artillery piece to help, but it was too little too late as the Prussians traded battalions for battalions, whilst relying on Gregory to continue to throw sixes every time a units was destroyed, further adding to the loss in army morale points that inevitably followed.
The really clever piece in card play with Maurice is that combat inevitably consumes cards rapidly in activations and event moderations, and the need to pause the fight as both sides attempt to rally off their disruptions.
In those pauses the other quieter parts of the front may get the opportunity to influence the battle within a battle by causing the enemy to react to other units elsewhere doing other threatening moves which forces card play in response.
Thus the Austrian main cavalry advanced out into the plain, seemingly looking to threaten the main Prussian line and cause a reaction to take the pressure off the Bavarians.
Sadly the Prussian line responded with its first infantry division and artillery mutually covering all approach routes that the Austrian cavalry might close through and thus stymying this advance allowing card play to return to the battle before the Bavarian hill.

As our game came to its inevitable close and with the pub beckoning, the Prussian second infantry division and the Bavarian division lay battered at the foot of the hill behind the village, with both sides desperate to replenish their hands of cards, looking to rally off disruptions, bring up much needed supports and keep on killing the enemy, but unable to do all of it at the same time!
This is another glorious modelling of this type of linear warfare, artfully captured in the play, and it was the card play that had the last laugh as with the opportunity to cause the Austro-Bavarian army to teeter yet closer to calling a withdrawal, the Prussians played the 'Death of a Hero' event card which seemed very appropriate amid the carnage in front of the Bavarian position and more morale dropped from the Austro-Bavarian army card in the last phase of play.


What a game and its leaves me a little exhausted writing it up a few days later, but adding to the catalogue of memorable games played with this clever set of rules.

Thank you to Martin for bringing along his glorious collection of figures and terrain to provide all the fun and to Vince, Gregory and Steve M for making an enthralling and entertaining encounter in the Seven Years War with Maurice.
Good times
JJ
Posted by carojon at 14:36