The Battle of Pinhoe - Dux Bellorum 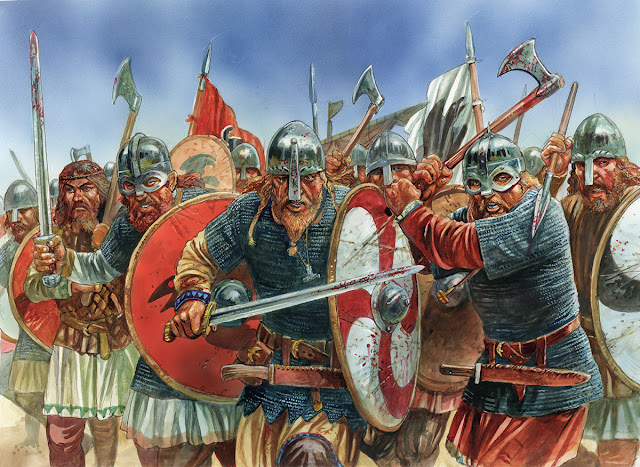 Three years ago, I had just completed the build of my Anglo-Saxon and Viking forces for Dux Bellorum, Dan Mersey's, and Osprey Wargames, Dark Age wargame rules designed for battles around the Arthurian period of British history, 367 - 793AD but just as usable across this early medieval period, and perhaps one of my favourite sets of rules from him and in the Osprey collection. 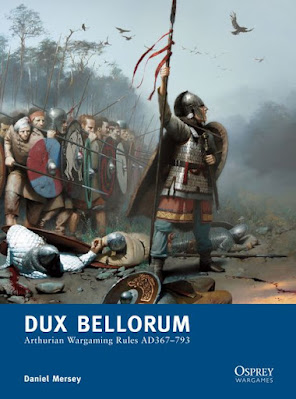 The use of the Leadership Points (LP's) mechanism to recreate the direction given to these large groups of warriors, some no doubt very practiced in their skill at arms but mostly less so in their abilities to manoeuvre, particularly during the chaos of battle, seems to me to be a really clever one, designed to capture the command difficulties of managing such a force for the commanders of the day.
Not only that but it also presents the opposing players with multiple command decision points throughout the turns of play as the battles swing back and forth in terms of one side gaining the advantage over the other and the need to emphasise to the warriors on the table to concentrate more on defence in one part of it or attack in another and with skirmishers, having survived the initial exchanges of missilery, a constant annoying threat to the more heavily armed warriors from being attacked from unexpected directions from these faster moving more lightly armed and clad warriors or being goaded by them to make an unwise charge and being enveloped in an immediate counterattack.
Watching two battle lines going at each other in Dux Bellorum is like a replay of just about every battle scene you have watched from Last Kingdom, with individual cameo actions happening along the line and of course with opposing commanders having to remember Uhtred of Bebbanburg's guiding words; 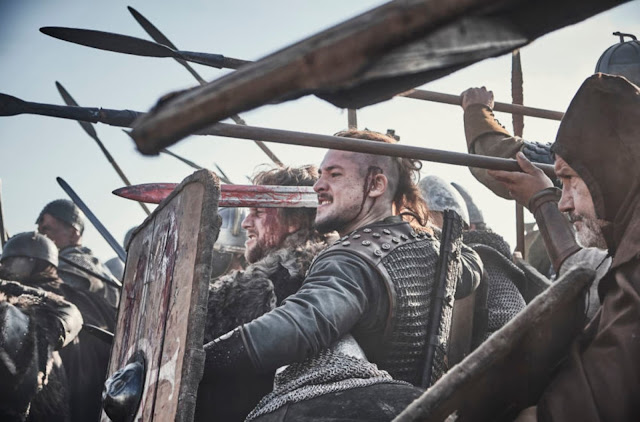 "Destiny is all"
With my collection built, the next part of the project was to pull together a scenario to capture our own local battle down here in our part of Devon, on the outskirts of Exeter and the charming village of Pinhoe, that probably appeared less charming in 1001AD, when it reluctantly played host to Jarl Palig Tokesen and his raiding force of 5,000 Viking warriors, intent on 'going a viking', having sacked the neighbouring villages along the River Exe after being turned away from the city walls of Exeter in a failed attempt to overawe the garrison into surrender.
I designed a scenario for Dux Bellorum to recreate the encounter this force had, with a relieving force of Anglo Saxon warriors raised by Thegn Kola the High Reeve of Devon who brought with him probably around 3,000-3,500 men from Devon and Somerset and planted his smaller force, it is thought, atop the commanding heights of Beacon Hill overlooking Pinhoe, Exeter and the River Exe Estuary with its panoramic views seen below in a picture taken during my battlefield walk in 2019.
Having walked the suspected battle site and, with the help of fellow DWG club friends play-tested some ideas, I got together with David at the club in 2019 to play the Battle of Pinhoe for the first time and you can read the post of that game in the link below and a post covering my walk of the battlefield posted to JJ's Wargames in the link above.
Next month I and a group of friends are planning to run out Dux Bellorum yet again for a 'big-bash' game with multiple forces using the 'Bard's Tale' scenario from the book, always guaranteed to get opposing players throwing their men into furious battle and, conscious of the need to have a pre-game warm up, offered to host another re-run of Pinhoe for yesterday's club game.
A little preparation was required, as I couldn't find my original draft of my scenario and so sat down to re-write it together with a few adjustments for this latest incarnation.
The arrival of Kola's little army presented Tokensen with a problem that he was forced to deal with, namely getting rid of this enemy force that could threaten his whilst they went about pillaging and looting the local area, but in doing so, not losing too many men that would threaten their ability to deal with any more resistance arising, and speedily so as to allow time for more pillaging before the inevitable relief column arrived, forcing a return to the boats.

Because the game represents an historical battle, with both commanders, not surprisingly untroubled by points and army balance but making do with what they had, the scenario objectives had to reflect those demands.

Reeve Kola, aware of his weakness in numbers and quality, wisely placed his troops on the steep Beacon Hill to provide his army with the force multiplier the steep slopes and commanding views provided, namely, protection against surprise attack and the steep slopes likely to tire an enemy charging up it.
So the Viking troops likely to go into an uncontrolled charge, would get their charge impetus of +1 but suffer the -2 for attacking uphill and the -2 for taking on a shield wall.
If the Vikings managed to hold their ground in the subsequent rounds the uphill deficit was negated, but should they be pushed back and required to move in again on the next round, they would again be subjected to the -2 uphill charge modifier.

The game is classed as an 'annals battle' but instead of the 18 turns of battle, we instead used the moving clock of 54 turn-points reduced at the conclusion of a round of play by the score of a d6, with the pressure to get on with things that variable timer can induce to the play.
Likewise the objectives were an assessment of the actual result which saw the Vikings achieve a tactical victory by driving the Anglo-Saxons off Beacon Hill, but a strategic defeat, in that their army was severely battered by the battle and Kola survived with the core of his force and was able to retreat back to Exeter to await reinforcements, forcing an early Viking departure.
Thus Kola was tasked with surviving the battle, ideally holding the hill and destroying three Viking warrior groups in the fight, to better the historical result and indeed a tough ask. Surviving and being forced off the hill would have been historical and Kola killed with the bulk of his army destroyed and with the Viking warrior loss under three units, a Viking improvement of their historical one.
With our two lines set up on opposite sides of the hill with distance up to the summit slightly favouring its defenders, the LP's started getting laid and had both sides favouring a complete line of warriors flanked with skirmishers, but seeing the Saxons detach their levy shieldwall to move out to the Saxon right flank in support of their javelin and slinger armed skirmish line.

As the Viking line closed it split into two distinct groups of warriors before launching into an uncontrolled charge up the hill to meet the single group of Saxons awaiting them on the summit.

The decision of the Saxons to await the Vikings in a single line was perhaps unfortunate as Dux Bel. only allows a maximum of three LPs to be distributed to each base or distinct group of warriors, and with only three available to the complete line of Saxons on the hill, the Viking leadership bonus of six LPs soon showed the value of smaller distinct groups operating together.

However despite their LP advantage the Saxon line took full advantage of the -4 uphill charge deficit on the Vikings and gaps started to appear in the lines as Viking warriors fell to the jabbing spears protruding from the stubborn shield wall.

Both sides recognised the importance of supporting the attacks made by the leader's companion groups and were soon throwing in attacks of ten and twelve d6, but even then seeing the occasional miss by such attacks only to have smaller unsupported attacks along the line make annoying strikes with a six scored and no defensive LP's to hand.

For the Saxons, this game is all about running down the clock, whilst killing Vikings and holding ground, and with just ten points of game time remaining and multiple Saxon groups gone, but the line still holding if broken, the pressure mounted on the Vikings to seal the deal and force them to retreat of it.
The end came dramatically in two succeeding turns of play with one Viking attack striking down a Saxon base with three hits, followed by two hits on Kola's base in the next that saw the High Reeve fall and the following 50% morale checks on all bases break the remains of his army.

Victory then to Jarl Tokesen, doing better than the historical outcome, but still suffering some bloody losses, narrowly avoiding the three more casualties to have caused three of his warrior bases lost in the fighting.
Great fun, and a classic game of Dux Bellorum.
Thank you to Martin, John, Steve M and Bob for an absorbing game and a re-run of our own local dark age battle, bringing to life the events just outside the city one thousand and twenty one years ago.
JJ
Posted by carojon at 13:04