They don't like it up em in the Sudan

Hi all,
This months club meeting featured a game hosted by Nathan and took us to the Sudan in the 1880s using his lovely collection of 28mm figures. The rules were Too Fat Lardies, "They Don't Like It Up Em!" which are a card driven set and really help capture the flavour of the period. 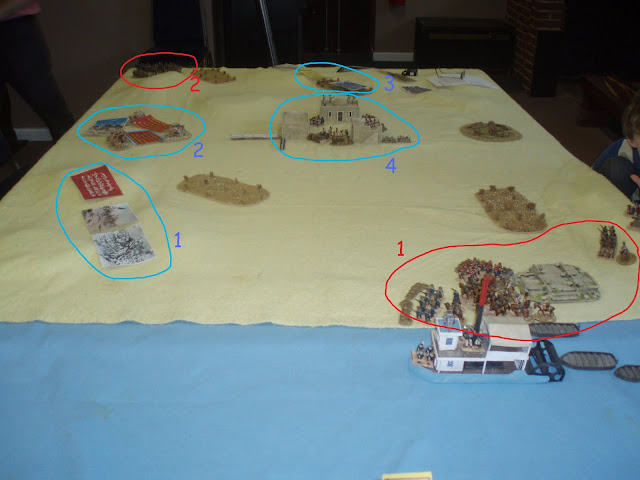 The photo above shows the opening positions, Brits in red and the Sudanese in blue. The British punitive expedition, four units of Imperial infantry and one artillery unit (2) top left are returning to the Nile pick up point via the small village (4) in the centre. I have marked the village as Sudanese held because although to the British players it appeared to be held by Egyptian troops, it was in fact in Sudanese hands, one unit of Ansars and two artillery pieces,ready to ambush any unlucky British advance guard.
The Main British force (1) consisted of two units of Indian infantry, two units of Naval infantry, Bengal Lancers, two units of the Camel Corps, one Gardner one Gatling gun and a heavy artillery piece. These were in the process of landing before setting off to meet the raiding force.
The Sudanese hidden units were at (1) three units of light cavalry, (2) three units of Ansars, (3) four units of fanatical Fuzzies 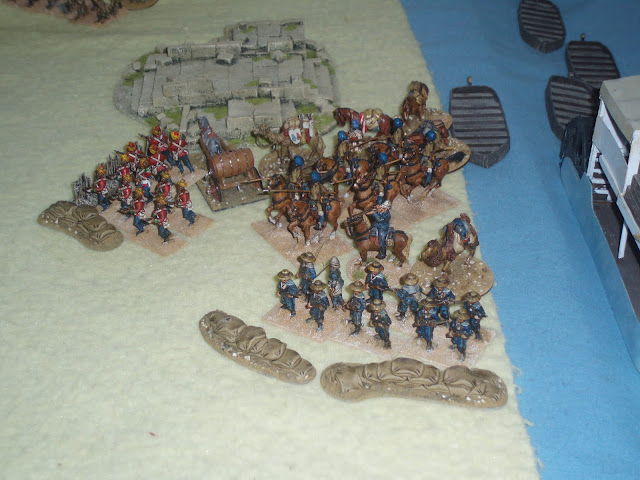 As the British main force formed up, the Bengal Lancers set off to inspect the defences in the village, whilst the gunboat attempted to spot out trouble close to the shore. 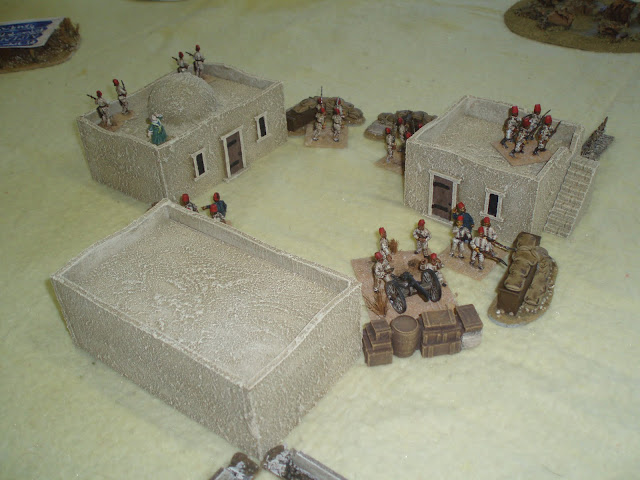 Meanwhile our brave lads marched via hilly terrain, keen to make the safety of the village but ready for any trouble on the way. 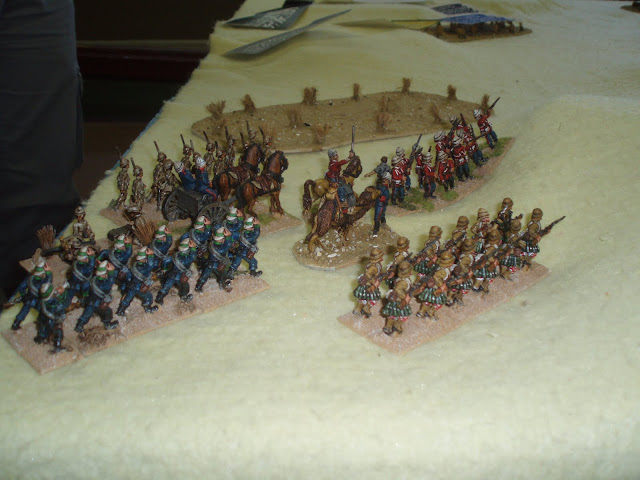 The Egyptians in the village transformed into Ansars and opened fire with canister and rifles from the defences, stunning the Indian lancers, who were then hit by a charge from the hills to their left by Sudanese cavalry who pushed them further back. 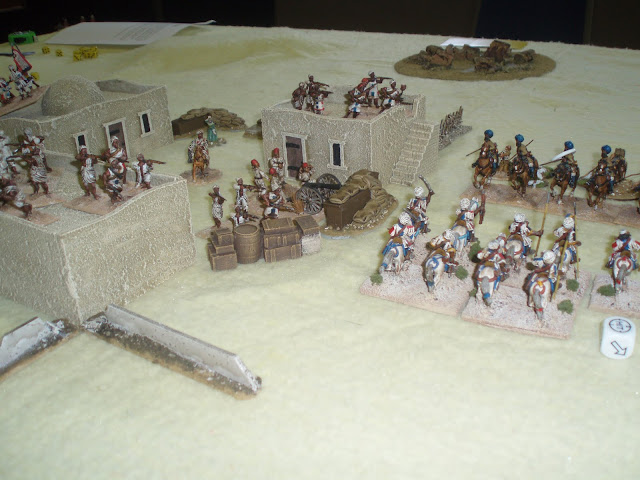 Meanwhile the Imperial infantry became an island in a sea of screaming fanatical Mahdists, with the Highland and Coldstream Guards defending the hill at the centre of their positions. 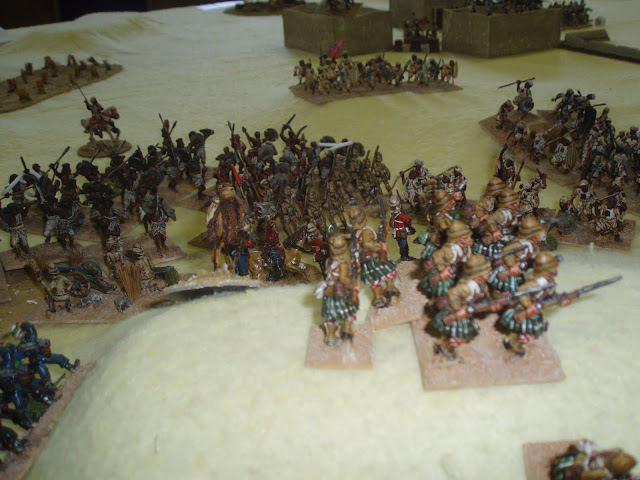 Following the ambush at the village and the sound of mass musketry beyond, the British main force formed up and prepared to march forward to the relief of their beleaguered colleagues. Would they get there in time? 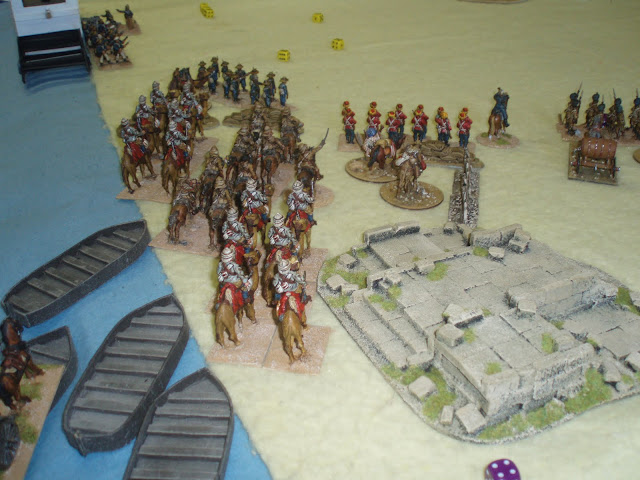 As the final shot shows there would be no force to rescue, with only a few Imperial troops left making a desperate bid to reach the main force. The Sudanese turned to face the new enemy in support of their village garrison. That was where our game ended. 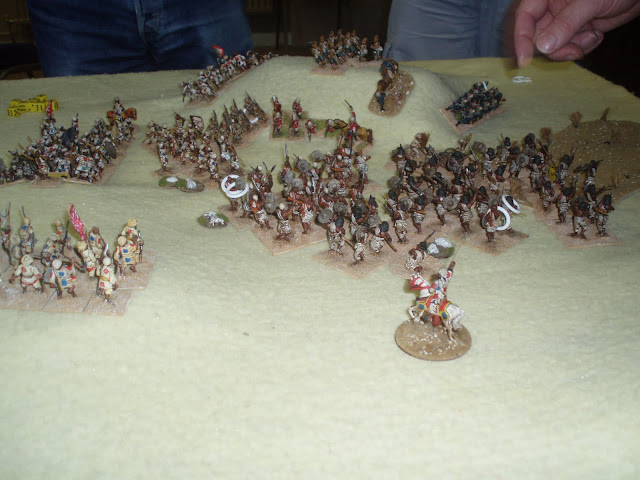 Thank you to Nathan for a great scenario and fun game.
Winter War Finland and 12th SS Normandy next month
Jon
Posted by carojon at 08:04