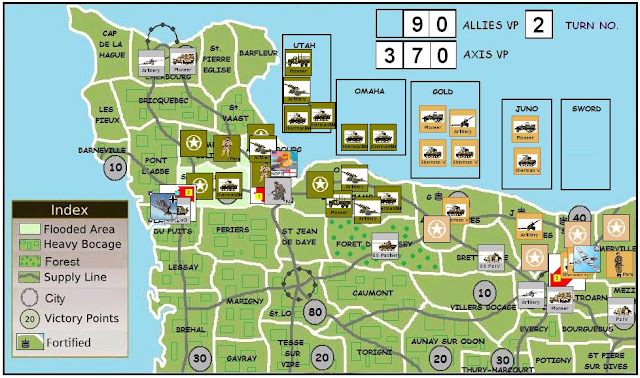 The German General Staff (Steve) and SHAEF (Jon) met up this evening at my place to sort out turn 2 in the campaign.

The tempo of events certainly favoured the Germans with only three attacks generated (must have been stormy weather).

The Allies got the drop for the first attack and went for an assault by the US Paras on the FJ in Carentan. I backed up the assault with US artillery and naval gunfire support to secure this vital link between the US beaches and the 40 points that go with it.

The Germans got the next attack and went for an assault by the 17th SS Panzergrenadiers into the flooded area of St Jours supported by the Luftwaffe (if they can get through my fighter cover), aiming to grab back 20 points and forestall any push to seal off the Cherbourg Peninsula.

The final attack went to the Allies and I opted for the "big one", 3rd Division are going for CAEN and 80 points of glory. I'm going to make it easy for them and have given them air support and and Corps Artillery in the form of the big 5.5" guns.

Interestingly Steve mentioned that if the Germans had got the final attack he would have gone for the 12th SS attacking into Arromanches, but that just a forlorn hope.

So there we are, three key battles planned for the next phase to see who will control the Normandy bridgehead.